I have been wanting to share just where our evenings have been going to ever since quarantine began.  The fall of 2019 saw my puzzle addiction finally under control and reintroduced:  Return of the Puzzle.  So it is not quite fair to say Covid made us do it.  We were already there.  But 2019 had seen the completion of 6 puzzles; 2018 had seen 2 finished, while 2017 also had 2.  In contrast (are you sitting down?!) the end of 2020 saw 42 puzzles completed.

As time went on, my family of 2 settled into very predictable behaviour.  The time to start (at first 9:00 pm, later 8:30); the music heard (Adrian von Zeigler's Celtic One); and the cloth covering during the day (protects against cheating, dust and sunlight and allows access to the bookshelves) all became standard.  The pattern crystallized into a jewel of together-time.  This precious interval, in the evening after dark, unflappable and cozy, became a rock for us, something sane in a world gone mad.  For a non-drinking couple it was a lot like going to an English pub.  Its very predictability became one of its most endearing characteristics.

Obviously this would not work without a large collection of puzzles.  Let me slip in a picture from the earlier blog post.  I stated in that post that the collection numbered 150.  I was wrong; it's closer to 115. 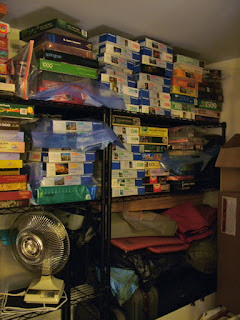 At the rate of 40 a year, we had enough for 3 years.  This is a lifetime collection, begun when I was a child.  It has been added to in waves over the years.  Part of my wish for this series of posts is to explore those waves.  At one point, a spreadsheet seemed the right way to document the collection (as I've done for my model horse blankets).  But all along, under my nose, week after week, I was accumulating photographs of done puzzles.  They would be very handy when, o god, o tempora o mores, I should ever have to choose to disperse my puzzles.

What happens when a puzzle is finished?  In the old days I'd leave them out for a minimum of 3 days, in order to fully enjoy the triumph, and photograph them.  Then I'd take them apart and back into the box they'd go.  Rarely, I'd write the date completed on the inside cover.  As 2020 wore on and our puzzle-doing became more consistent, polished and professional, I found the 3 days impossible to sustain.  It shrank to 2, then to however long it took me to shoot them and however soon I could bear to take them down... sometimes merely overnight.  I had to make space for the next puzzle.  There were a few times that board had three puzzles at once; more on that later.

It also seemed to me these posts could be a convenient listing for those puzzles I wished to get rid of Now.  What a great way to go through the collection and weed out objectionables.  For there were objectionables.  Starting in 2015 I'd gone on a great crusade against mold and rot.  Both puzzles and horses were affected by this terrible scourge which had gone on behind my back for who knows how long.  Five years later I am much more on top of the situation, believing it caused by moisture (now controlled by a basement air conditioner and 2 dehumidifiers) and exposure to air (now controlled by Ziplox and plastic sheeting, and, in the horses' case, by blankets and bags).  But some puzzles were damaged beyond repair.

And some puzzles I just didn't like.  The above Neuschwanstein is one of them:  too thin a cardboard for my taste, and too loose a cut.

Naturally, many of the puzzles in my collection feature horses.  Stick with me for the entire 42 and you'll see most of these.  Meanwhile the factor controlling choice of next puzzle seems to be alternating between photos and drawings/paintings.  This has largely, although not completely, held true.Here I'm breaking my rule of one pic per puzzle in order to show details.  This is one of the more elderly in the collection, dating to the 1970s, and it has simply WORN.  Yet it still fits together very well and is much valued.

The collection started with Springboks.  These are my gold standard for sheer endurance of play and long-held value in the species, centering around the great Octagonals and Rounds of the 60s and 70s.  But then in the 90s we went to Denmark for sabbatical and discovered Ravensburgers.

Today more than a third of my collection consists of Ravensburgers, for they, too, are a gold standard.

This doesn't mean the puzzle world isn't filled with one-offs.  It is!  We found this lovely artwork in a gift store in an Audubon Nature Center (it was Beidler Forest in South Carolina) just a few years back, around 2017.  It features Charley Harper, the famous wildlife artist.  The puzzle was made by a company I'd never heard of and was of excellent quality.

Gift stores are great places for puzzles.  We found this one at, of course, Horseshoe Curve National Historic Landmark.  If you live in Central Pennsylvania (and like trains at all) you gotta go!  The puzzle had been produced by (I only just now found this out) a German company and imported by a South American supplier.  Unfortunately, in the way of cheap souvenirs, this puzzle became one of the worst offenders in the entire collection in terms of mold.  Only one other is as bad.

This one is also up for grabs, and the rest of the pix are closeups of the damage.

A light swabbing with rubbing alcohol helps; I just haven't had the time to clean everything off.  I've learned the hard way to store all puzzle pieces in Ziplox.  Boxes themselves, if precious, are stored in large 2-gallon Ziplox.  We run the air conditioner all summer.  The damage has been stopped, and horses, puzzles and the piano can be reasonably free from this curse.

Surprisingly, model tack, except for a very few tiny spots, has never suffered from it.