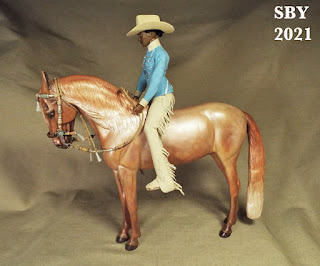 Below is Orlik's official finish picture, taken on my front doorstep on the 20th in the last hour of sun.  I really wanted sunlight for this.  What luck to have a clear path to the sunset between houses and that there were only a few clouds!  The deck, my normal shoot place, has been snowed in for months. 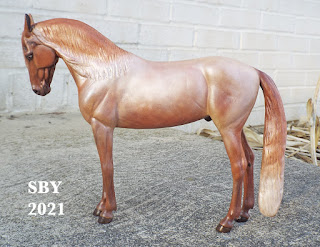 These 2 shots show that I was able to check off every goal:  Red Roan with Pearlescence, lighter over the top, Flame mane and tail (how long I've been trying for those! years!), and dapples.  This horse's painting built on the experience of the previous 3 NaMoPaiMos.  His color was new, as was his level of dapples; the rest was simpler, and that was on purpose. 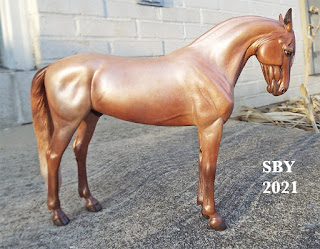 On the subject of dapples, let me try to clarify why sometimes I say he's my first case and sometimes I say he's my second.  Ambolena in 2019 was technically my first; but her single, experimental layer was so minimal -- look in the upper middle ribs in the yellow (it almost doesn't show on the finished filly), that my mind is conveniently forgetting it.  How to simply explain what is complicated?!  That's a skill...
Again on the subject of dapples, here is a better look at Orlik's off side.  I really think these 'alcohol dapples' have potential for Appaloosas and other roaning effects.  I just didn't have time or desire to pursue them on Orlik. 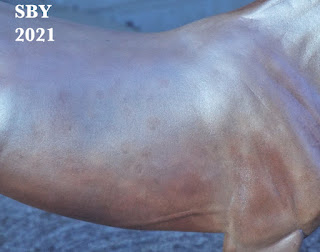 Time and desire...  This is the first time I've finished a NaMoPaiMo horse so early.  How did that come about?  Quarantine life has bonded me ever closer to my husband, and he is much more organized, disciplined and scheduled than I am!  Also, covid life has simplified things, and I was truly able to clear off my calendar and just paint for days on end.  I wasn't trying anything drastic, and that really helped.  Even so it feels weird.

I knew from previous years it would take me between 8 and 11 days to prep and pastel a horse.  Additional days are always needed for photographing, processing, and posting -- what I call 'advertising & publishing.'  Yeah, documenting something adds time to it, Big surprise!!  My long slow photography process isn't showing signs of speeding up, either, despite all the pressure NMPM and other online activities can bring to bear...!  I'm polished but plodding.

This all boils down to:  It's easier for me to start early than to gamble I won't make any mistakes,... or that, if I do, they won't take any time to fix.   Still, waiting until the last minute is so incredibly human,... and this community is so supportive of that very humanity... that I can't scold too much.  I've been there myself, particularly with Marimba, who was not finished until the 26th.  2020 has been rather hard on my emotions, shall we say.

Once finished, what did Orlik do??  He gave a lady a ride. 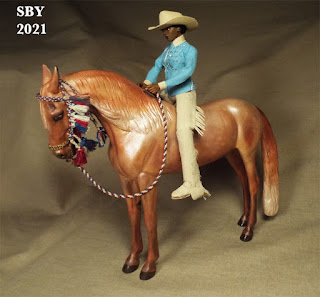 I've been unable to discover any special tack that Orlov Trotters wear, (outside of Troika harness).  For his halter shots, I wanted something unusual and beautiful.  I know the Orlov Trotter is strongly influenced by an Arabian -- that is why the breed appears mostly as greys.  Brasenose wore an Arab halter when he first got finished.  Wouldn't these Russian breeds appreciate some kind of colorful, handwoven woollen gear...?  What did I have that would look good on him... 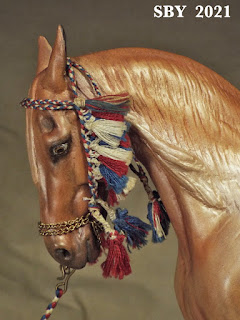 I have two amazing Arabian costume halters I'd commissioned from Joanna Bolton of Boulder, CO in the early 1980s -- she had been my neighbor for a while then.  I still have an English saddle by her and a catalog ("Black Fox Saddlery").  They're probably my earliest commissions from another tackmaker!  One was red-white-and-blue and the other a most delicious green, yellow and gold; it had originally been made for Morganglanz the chestnut.  I also had my new Field of Dolls doll Chalif, so new she is still just standing around.  To my knowledge she's never sat a horse.  Of course, Orlik was just as virgin. 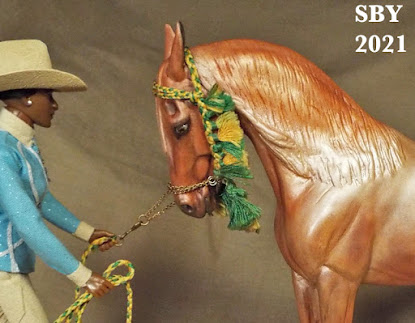 Sometimes you like to set up a shot that tells a little story. 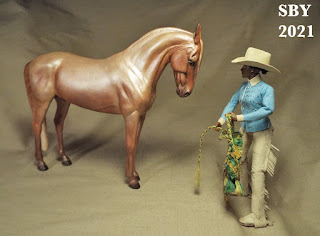 I just wonder what is going on here. 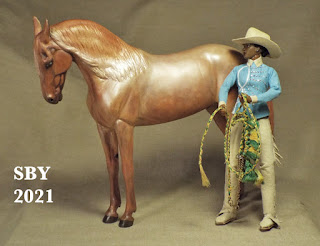 I'm ashamed to admit that it was only now, searching for tack that Orlik might appear in, that I thought of the obvious answer.  This IS the Timaru Star II !!!!  Brasenose had gotten there without any trouble!! DUH, where is my brain!!!  After all my dreams about the next book too... 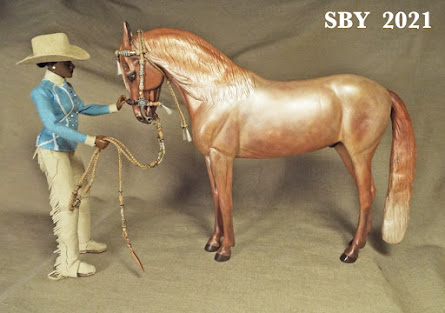 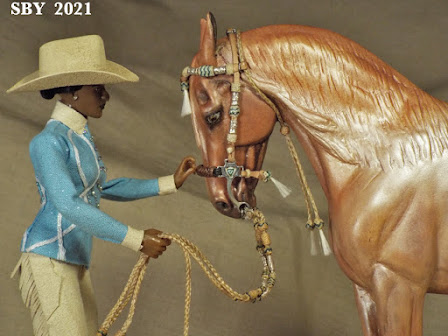 Why does it take so long to connect up the dots??  I've had this resincast for months, I've painted him and photo'd him and had tack on him, and only now does it occur to me he'd make one heck of a spade bit horse.  The arch of the neck and the long mane are giveaways.  His lean bony armature lends itself to a scrawny Spanish look, as does his expression.  Even his color -- oh my yeah, Orlov Trotters are vanishly rare in red roan!  The pearlesence, well, we'll just accept that mystery...  Chalif knew all along.  Perhaps this explains her tender freedom of expression,... her fearlessness around him.  She knows.

(Come on Sue, it's only because she can't stand up by herself that she's got her hand on his nose!  But she stood up with the green halter, didn' cha see?! -- !   Yeah, well that was cause she was pointed the other way, uphill... )  [Chalif was the name of a Russian dancer and choreographer; I came across it in Mary O'Hara's biography.]

This is now one of my favorite shots. 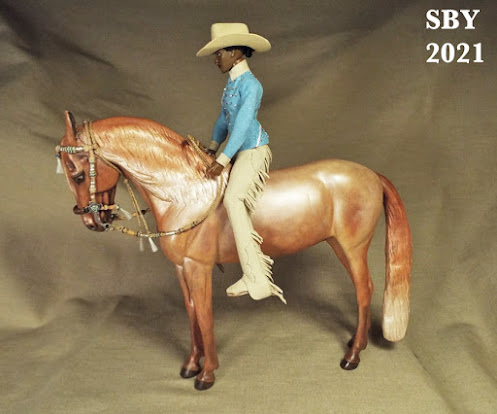 Jennifer Buxton, First last and always, for founding NaMoPaiMo and staying the hard course of its encouragement and growth (not to mention blogging up storms).  You are our queen mother.  Long may you live and enjoy the fruits of your labor.  And her NMPM helpers.

Ryan Buxton, for coming up with modern software to help us all along.  It's like magic.

Margarita Malova, for sculpting this horse, and all 3 of my past NaMo ponies.  I can't wait for your next Troika!

Ann Bilon, for listening to me babble.   Friends are invaluable, now more than ever.

Kim Bleecker, for being there when I needed advice from an expert painter, even if for only 5 minutes.

Sarah Minkiewicz, for a great blog article on shading the face (amoungst a universe of other gifts to the world).

Isaac Brushett, for a long-forgotten mini-tutorial on painting eyes (2017).

The Mares in Black, Jackie and Heather, who accompanied my painting for hours and hours.  I might have been back in May, June and July of 2020 with you, but it was still wonderful.

And George, my husband, without whom none of this would have happened.  For a guy allergic to horses, he has supported the TSII through thick and thin.  Every hobbyist who wants my tack owes him a debt of gratitude.