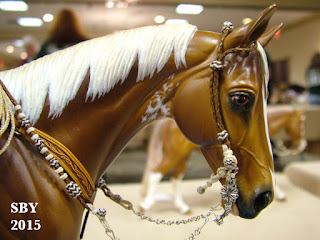 When I was at Region X Regionals last month I had the privilege of judging an extraordinary entry.  I later sought permission from its owner to share pictures of it on this blog.  Not only did she give me permission, she sent me a couple more shots!  Thank you, Beth.

Naturally, a judge sees the best.  It takes quite a horse (and tack) to really seize my heart and hold my attention.  In truth, I must confess, I have seen this horse before, and photographed her before.  Two years earlier, I had taken these at NAN 2013, in Pennsylvania: 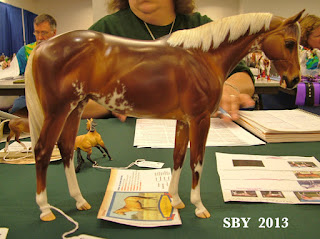 This is, of course, Victrix, sculpted by Carol Williams of Rio Rondo, and painted by Chris Flint.  Beth calls her Suicide Blonde. 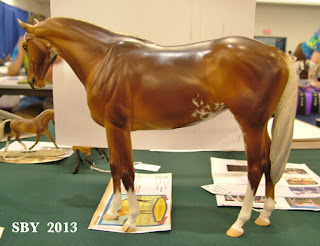 It was seeing this model, I am convinced, that influenced me in my purchase of an unfinished Victrix at BreyerFest later that year.  Me, a Westerner!  Me, who doesn't do English... Me, who barely does sculpting, but  I kept having visions of doing a continental braid on her!  Me, who has too many unfinisheds as it is...  who usually can afford only one big-ticket item... OK, this is getting beside the point, but look at this face: 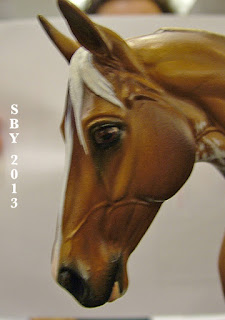 So when I saw her again at Regionals, there was an added layer of familiarity.
That was before I closed in on the gear. 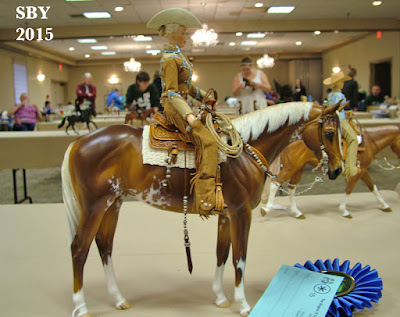 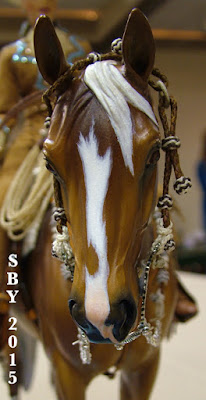 Lord save us, it had to be by Jacquee Gillespie.  The Beautiful Horses braider.
(Nice pun for Chris Flint.  [beau cheveaux = beautiful horses])

Close ups of this amazing set: 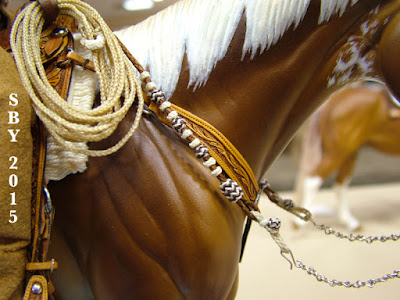 The hobbles.  Braided and rolled lace (I know the look of that material) with thread buttons, braided just like the full scale version.

Beth later told me the saddle was an Evelyn Munday, the doll was by Darla Curtis, and the saddle pad was from Corinne Ensor of Maryland. 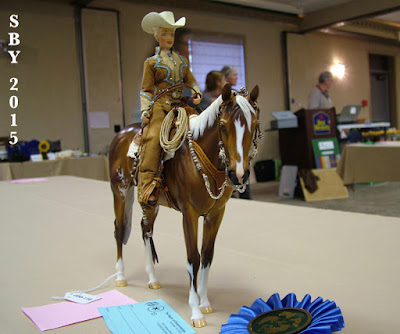 Way to go.  The eye that put this ensemble together knew what it was doing!
Jacquee has a FaceBook page: Beautiful-Horses-the-horsehair-braider
and a website:  www.beautiful-horses.com

At this point I have to back up a little.  My knowledge of the fantastic artistry of Jacquee Gillespie began with a dimly glimpsed display case at Artisan's Gallery, during BreyerFest 2008.  I was still using my old 35mm Nikon camera (it would not be retired until 2010).  I struggled to shoot through the crowds, in relative darkness, some of the most amazing scale-model Western braidwork I had ever seen. 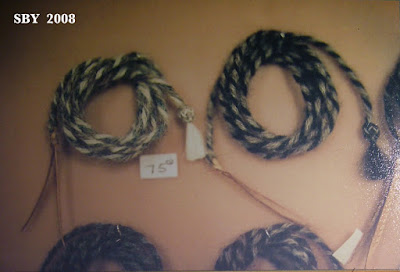 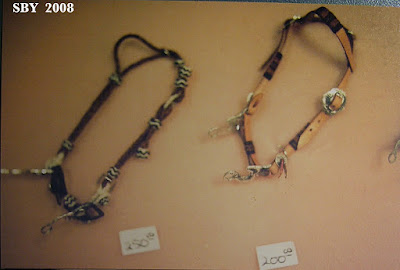 And the hardware!  It was clear she'd made her own buckles and bits. 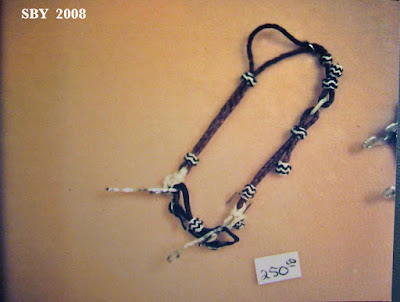 Yikes!!  Real horsehair use in model tack is quite rare.  Up to this point I'd known it only from the likes of Juliane Garstka in Germany. 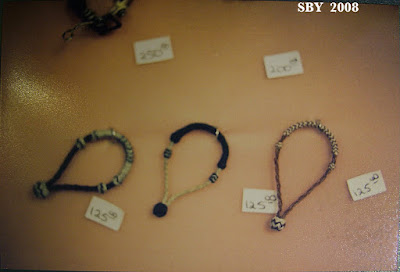 This girl clearly knew her stuff.  I had that old drop-to-my-knees feeling:  I had encountered the Real Thing, that which the rest of us merely make models of. 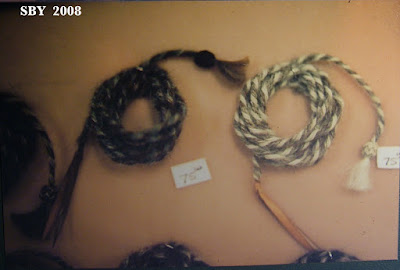 Although I'm ashamed of it today, I thought her prices too high.  I struggled whether to snag one of the mecates.  In hindsight I really should've.  Jacquee's work is very rare and hard to get hold of.  I later asked Beth how long it had taken her to get the Blonde's bridle.  "Oh, about 2 years!"

I found that Jacquee lived in New Mexico and made braided-horsehair mementos for people who had lost their mounts, from the horse's hair.  She was a jeweller -- that explained the silver bits and buckles, and the beautifully-scaled and crafted rein chains.  She owned dogs and alpacas -- that explained the fibrous mecates.   I experienced what has since become a common feeling:  surprise that an outsider could do so well, in this, my own closely-guarded and manifestly difficult field of expertise. 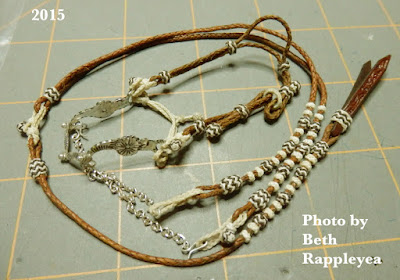 I usually have two mental paths to follow when this happens:  I can try to impress them with my own superior work (making them admit I'm better)(beat), or I can try to collect their work, learn more about it, admiring, and hope they'll admit my work has merit (join).  In the majority of cases I have chosen join.  The deciding factor appears to be so deeply buried I can barely detect it, but it has to do with 'liking' or identifying with the artist.  (Read C.S. Lewis' That Hideous Strength for a look at this phenomenon: Why did Jane 'like' the Dimbles?)
Of course, this leaves me right back down with everybody else:  How to obtain these delicious pieces?!  The thrill of the hunt...  In the meantime I take pictures...

At the Regionals, Beth had more tack on her table, and graciously let me photograph it.  (This time I've got my digital Fuji.) 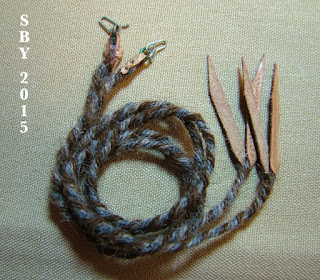 This is a good look at the curbstrap (above).  The bits and buckles aren't just handmade; they're made with the unifying eye of a professional artist.  They match, in other words, and express an Art Deco influence.  It is her style.  At this level of skill, style is the main thing separating and distinguishing artists. 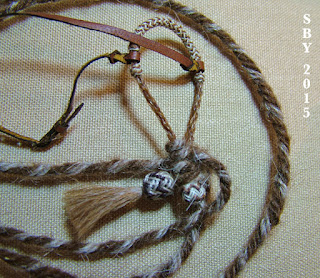 The bosal core is made from horsehair.  I've seen real horsehair bosals... in Mexico! 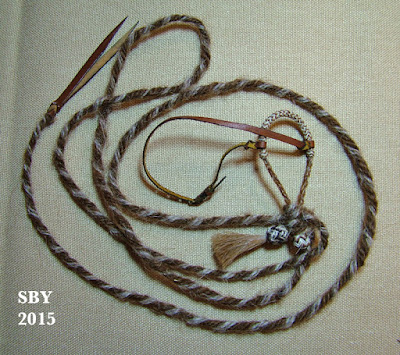 This piece has more detail than many a full scale cousin.  Oh, I wish, I wish...

Here is the last view from Beth.  This would be the 'dos reindas' (two reins) phase of the horse's training, wearing both hackamore and bridle.  The same artistic style ensured they fit together.  The camera, alas, distorts the ears. 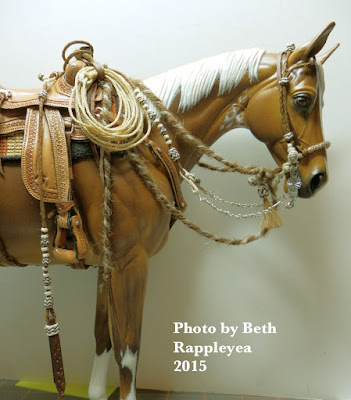 I'm going for a close up: 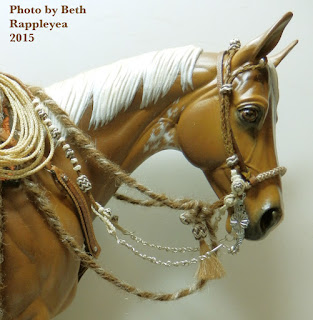 Thanks again: to Beth for her generosity in sharing this gem, to Jacquee for making such quality pieces, and to the crew at RXR for putting up with my judging.  I'm inspired.


Notes from the future:  Starting in January I hope to pursue work on pdf-ing the Guide (this is NOT a curse) and starting my last Lottery silver saddle, the Star Wars set.  I also hope to start making smaller pieces and auctioning them.  It is my intention to make small donations to NAMHSA, spread throughout the year.  The 'grandfathers' (standing orders) will have to wait a while longer.  For more details, see our Tack Orders page of the TSII website:
Tack Orders