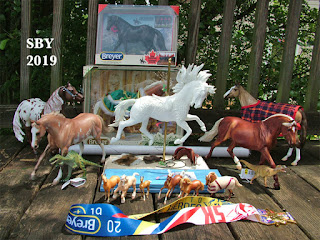 We will start with my Net Loot pic and see how far I get.  As 'net' implies, there is a Gross Loot (below); it shows additional pieces intended for sale.  I confess, it was a whopper of a BFest for me.  Financially successful yet emotionally a rollercoaster, this 28th time for me was marked not just by 9 horses, 16 SMs and a bunch of other stuff brought home, but by many stories -- more than most.  Sometimes I get a show like that.  I will try to share some of them in this post.

Here's the Gross Loot, grand total of what came home.  The centerpiece, Laura Rock Smith's carousel horse resincast Ziggy Stardust (also known as Alter Ego), was purchased on Sunday.  His timing alone is a story:  For the first time ever, room sales were happening on Sunday!  in the 600s no less!!  For the past few years I've been staying over on Sunday and driving home on Monday:  Indulging in my age, I needed that extra day to recover.  Tear-down does take time: packing up, carrying out, checking out and loading.  It's always been a transition day.  I opened my door Sunday morning (after the race) and had several serious shoppers!  Surprise!!  For the first time since my occupying the 600s, more people than me just couldn't bear to stop. 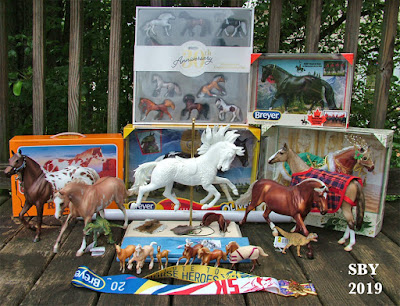 The phenomenon kept going Sunday evening, but this time I was the serious shopper.  When I walked into Laura's room for the second time and quietly took out large-denomination cash, she remarked I was caving.  Later my husband said I should've mentioned something along the lines of spelunking, mining or even Kentucky's famous Mammoth Cave.   For myself, what I should've said was, "Now I have finally caught the brass ring."  After 8 days of model horses, inexplicably and in the face of all reason, I fell in love with my true favorite breed.  I don't care how long it takes to paint him.  A fire that has slumbered for decades chose to awake.  What we actually said to each other was something along the lines of "I've always admired your work."

The Roman, the Oliver and most of the Stablemates are for sale.

You should see how different the RCMP pony is from the Black Beauty on that same mold.  Even their stars are different.  "Obivous future FB post opportunity..."

Quill, the only tent horse I really wanted, is wearing this year's BFest theme Jaapi (yoppy) halter.  I don't know how Jody keeps on creating winners, given Breyer's very-broad-brush themes!  After that purchase, I indulged and commissioned a halter for my little Ambolena, the golden Akhal Teke stretching filly, my NMPM pony.  Two professional tackmakers, myself and Jody Powers of Jaapi, designed her halter: two shades of green and black.  You can see it on the wooden base of Ziggy, just to the right of the pole. 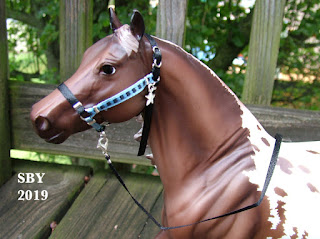 This year I capitulated to my Stablemates mania.  I collect the palominos.  This is my answer to the insanity that is Stablemates, first introduced in 1975 (I was 15).  In the 80s I made a few English tack sets for this scale, but then my tackmaking interest dropped; today it lies fallow.  For BFest 2019, with a year's worth saved to spend, I thought I might be able to afford a few SMs.  (By the way I spent it all...)   For the first time, I made a picture of my SM collection and printed it out.  That way I'd know which ones I already had.  I wound up buying 6 more palominos.  The blanket on the rightmost was made by Bobbie Allen.  The 6 is not counting the 30th-Anniversary set Smart n Shiney, whom I also purchased.  He is one of the rare metallic palominos; I only have about 4 of them. 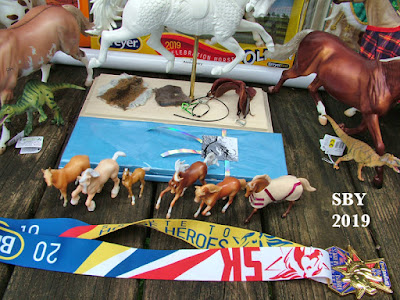 I carried this printout around:
In the end my palomino Stablemates were Exhibit A of what I've come to call "automatic purchases."  They also became Exhibit A of something I felt was out of control.  It is all very well to save up over the course of a year, plot which tent horses to get, commit to artwork (the blue tiles) and invest in tack.  Such pieces I have anticipated for months.  The SMs were last-minute and somehow felt very limitless, boundless...  bottomless.  A morass.  They contained the potential to completely consume a collector.  Cute as they are, they pushed me over the edge.  I am currently sick and tired of having to automatically collect anything.  I'm ashamed of my weakness.  (For normally I can boycott.)  For the foreseeable future I want no more SMs; and if you're wondering whether I'll ever make tack for them:  A serious Not Yet!!  Buyer's remorse?  You bet.

A quick little story.  This was told to me by Lori Daniels and took place during one of her judging workshops.  She had a young customer with a hovercraft mom.  With the mother finally shooed away, the kid still could not concentrate and commenced constantly crinkling an empty plastic water bottle.  Lori said, "And then this ARM came through the curtains and took away the bottle!"  It was very hard for Lori not to laugh.

Here is one of the last shots I took of the Akhal Teke Set No. 1, for sale during BreyerFest.  (It was picked up the next day.)  I had bought a Rocket as my second tent horse (I would have freaked out if he had been a paint; I was after a Teke) and was falling in love with him after having been disgusted with his color for weeks.  Sometimes this happens.  My own consistency worries me!  But having tried the Teke Set on him, I saw how much better it was on him than any other I had tried.  After the Children's Show on Saturday I was wandering the AllTech Arena. 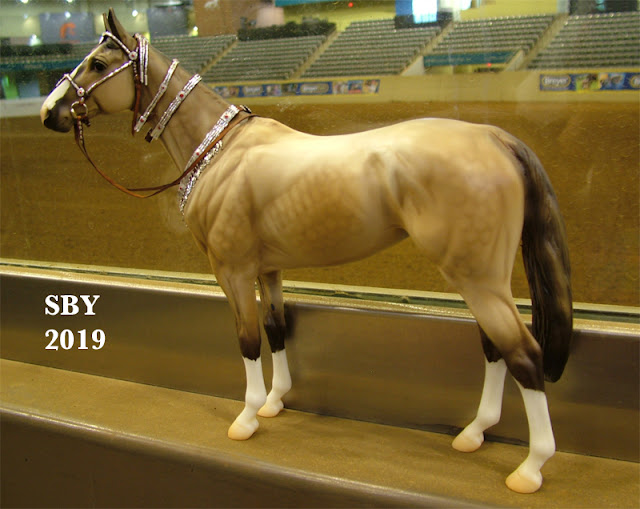 I think we can safely say other colors of this sort of set will happen in the future!

Ealier in the year Karen Gerhardt had written about how she'd wanted to sculpt a flying horse for quite a long time but could never make it work.  Finally an idea came to her.  In bas-relief she captured the tumbling glory of a horse who found himself set free, romping for the sheer joy of it, discovering his powers high in the sky.  When I saw it I felt it would make a superb gift for a certain vet I knew, plus go well with Hillingar the Unicorn.  I ordered a couple in person, in Colorado, and then paid for them in Kentucky.  (One for me.)   This is kind of the ultimate flat pony for me... 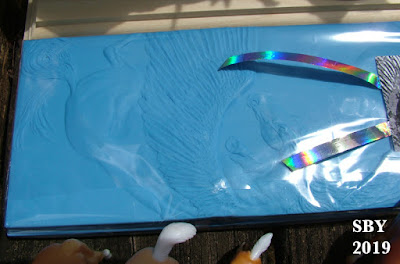 I was selling out of my room when the Mouse Lady came by.
This was Sondra Householder.  I knew her through NaMoTackMo.  Upon seeing her wares I simply had to get some (yeah, more automatic purchases!).  This time I felt I was investing in a miniature tack shop.  There is really no other way to get in-scale fur.  The possibilities are endless!  This close-up only shows the shrew fur.  See above for the mouse fur.   Wild ideas include coats and cloaks for sleigh riders... 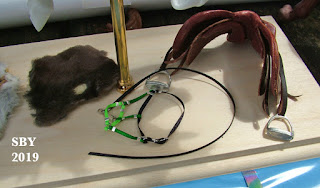 On the right is the lone saddle I bought this year, made by Kristian Beverly, who keeps getting better.  I didn't have as much time to shop as other years, I was so busy selling.  However this apparently did not stop me from spending my whole budget...

The story of the Dundee will have to wait until another post.