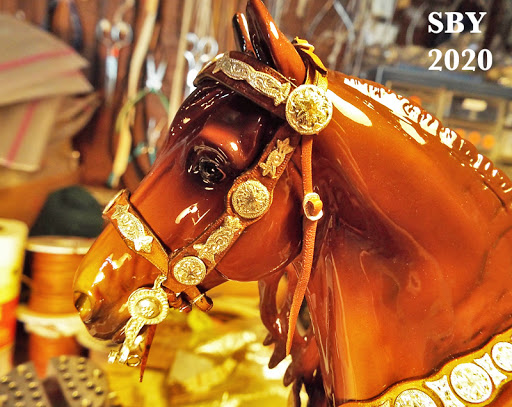 There seems to be a pattern here...!  How my customers can bear to wait so long is amazing, yet I truly have been trying as hard as I could.  Tackmaking is still fun and wonderful.  It's just that there have been so many distractions, not to mention mesmerizations, going on...

During the early months of quarantine I was sailing along fine.  I heard from other artists how tough they were finding things -- how their muse was drained, their hope low and all their mojo gone -- but I just couldn't understand.  I could never lose my joy in creating:  it had always been part of me.  Of course there are ups and downs, tidal waves and retreats... but this... no: All things considered, I was doing just fine.  And then came July.

In late June my family entered a zone it had not been in before:  My Mom went into hospital for nearly a month.  It was not Covid19.  She had small bowel obstruction w/ complications.  It should have been an easy fix, but something went wrong, and for an 86-yr-old already on oxygen, very bad.  I could only advise from afar.  No one has been able to visit her.  She is in rehab now, God be praised, learning how to walk again.  Curiously, mysteriously (!) with her slow recovery, much of my mojo has returned.

I've sometimes not recognized I was struggling, even when it was obvious.  Early July went by with no tack hours at all; other weeks, starting mid-July, had only 5 or 6.  It's ranged from 2 to 12 hours per week.  The last two weeks have accumulated a total of 7 tackmaking.  But after so much struggle, I do feel things are turning around.  Perhaps I've gotten used to balancing on a tightrope in a three-ring circus. 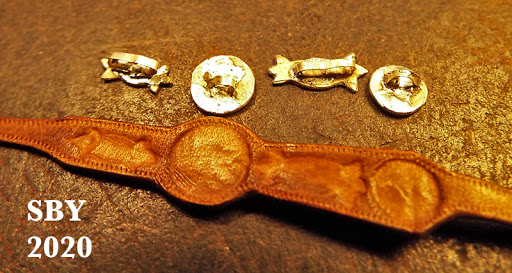 This is a very complex piece of tack, one that requires every bit of skill; and it is still teaching me.  Each concho and plate gets to be made from scratch, have its backing loop soldered on, then be set in Thermo-Loc.  Then engraved, and the Thermo-Loc shaved off -- a ridiculous waste of time, and I really hope I've learned to completely change my approach!  Future plates will be engraved first THEN have their backing loops soldered on, the work of polishing-after-soldering be just accepted... Then the conchos are set, again by hand.

Here you see me using scissors to clip the soldered metal lace at an angle, so there will be points on the prongs: 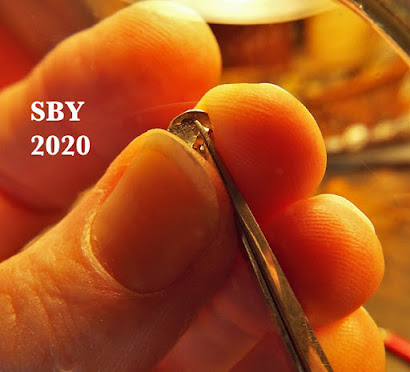 Three-ring circus it is:  there were plenty of other distractions going on.  Our air conditioner was not answering to its control panel and eventually failed to turn on at all.  (After much research we ordered another.)  With the choice to conduct classes online, we decided our internet was too slow.  We had lived on DSL for decades, never needing cable since we are not TV watchers.  (What does that say about our entertainment?  Only that we read at the table, and read,  and.. read... and ... READ...)  Now we have cable (and cable bills), hah!  On the roster of ridiculous things unattended to, the dishwasher is still broken, ye who have followed these adventures!  It's almost Shakespearean, the comedy of errors. 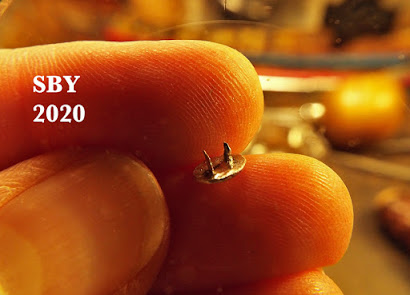 There was regular life:  walks, runs, hikes, drives, canoe trips locally, of which the last two get catered to (I am particularly proud of our in-house canoe caterer!)  FaceBook went from mildly addictive to something I could not seem to control.  And every evening, almost without fail, we enacted our own Quarantine Routine:  jigsaw puzzles right before bed.  This, too, is an addiction of mine, and although I thought it was controlled, it wasn't completely and it ate a lot of time.  Why are humans so hypnotizable?

I've got a bunch of future blog post subjects and that's one of them.  I love puzzles. 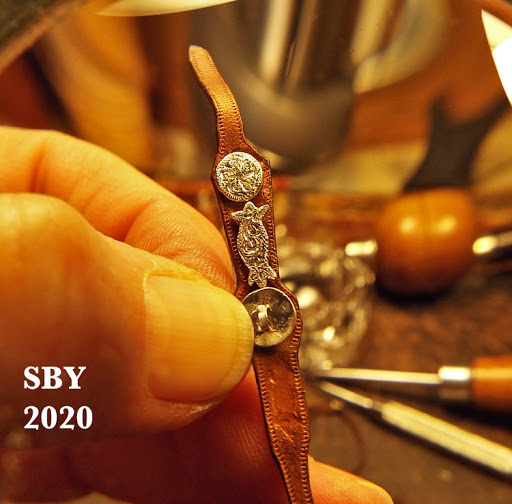 The process of 'sinking' the silver into the leather is a whole 'nother tack trick, one that's very hard to execute properly.  On this bridle I learned a new way to do it, in addition to the old way of tooling a shallow 'pocket' by eye.  The new trick was to outline after the concho was set, with a thin dull awl.

Here you see the conchos during the piercing stage.  Each slit is located by eye and cut with a needle chisel. 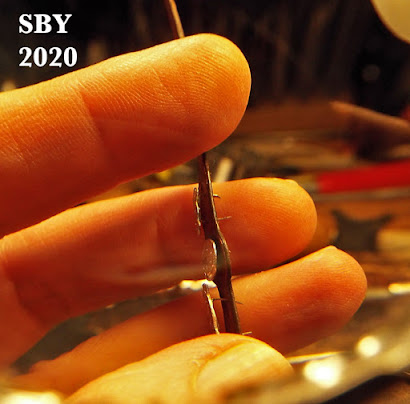 One by one, the conchos were set.  First the near cheekstrap, then the offside.  One piece at a time, cheek...  by...  cheek. 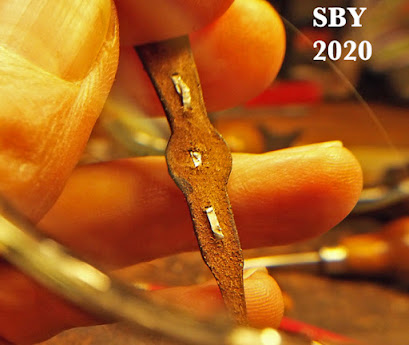 Man, what a beautiful bridle. 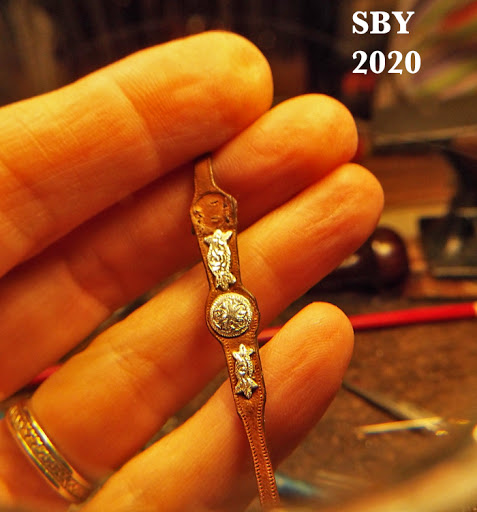 On this style of cheekstrap, one hard part to build is the bit holding arrangement.  I've long since figured the how -- a friction keeper on the inside -- but executing it was tough with that lower concho in the way.  How to hide the stitches, showing as little as possible?!  Above, you can see the keeper's stitches on either side of the last concho's place.  (Remember that square of leather in the 2nd pic?  That's the keeper.)  Only one side is sewn at first here; (the other side is just holes).  Here's the back view (below).  Having the holes pre-pierced was an advantage. 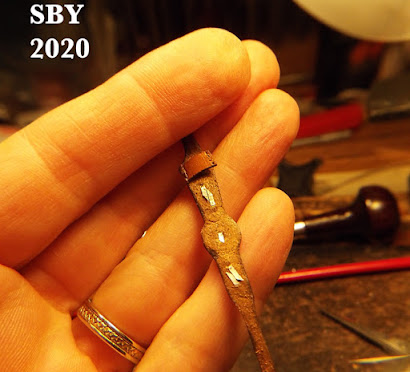 Here's the same view with the last concho set in: 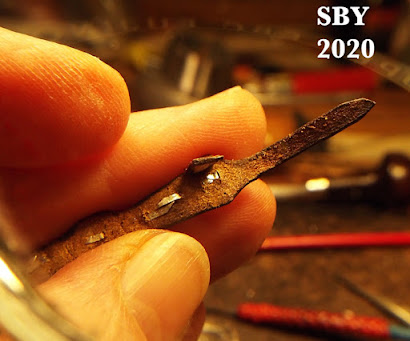 Real tack trick here:  The second side of stitches is done AFTER the concho is set.  How to sew them under the metal?  Bend the leather and raise the concho's edge.  It's flexible, leather.

Later, a thin lining leather is used to cover the prongs. 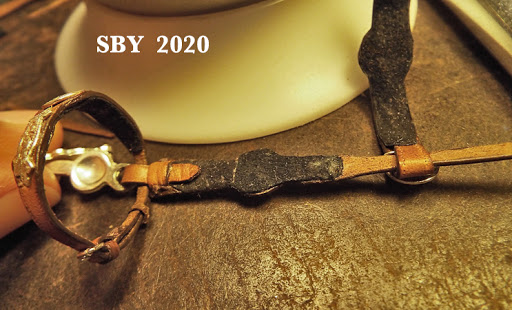 When the cheekstraps were done, I had to decide what kind of buckle would be used on the crown.  My first pass at this saddle portrait, TSII #451, used a tongue buckle.  Yet for some reason the Muse wanted a friction, or double, buckle there.  I finally made one from scratch -- a lot of filing.  At first I thought it was too big and you'll never know how close I came to selling it.  Then I hammered it smaller and decided it was okay.  I eventually made a matching throatlatch buckle, from metal which had been hammered thinner to get a smaller gauge.  [Note from the future {08.30}:  evidence points to these 2 buckles being sterling.] 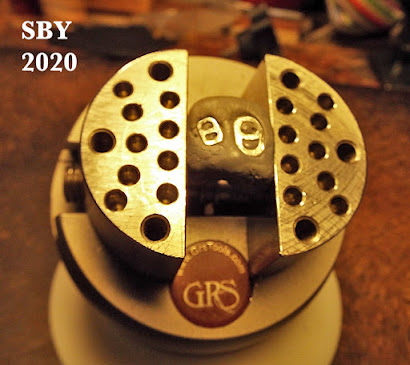 Although the indicated horse for this order is Alborozo, I've been shooting these pieces on Straight Bet, known in my herd as Toucano.  He is refreshingly different, a completely lovely color and still a Spanish breed.  He's also newer, something I hate to admit influences me so much, but it does.

The breastcollar does not fit him, because of the mane.  Perhaps I can be forgiven for showing him anyway. 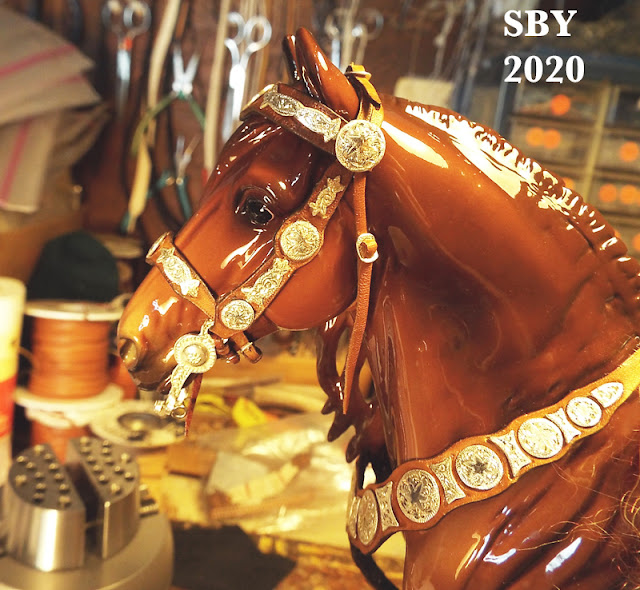 A peek at the crown buckle, which caused me so much psychic effort. 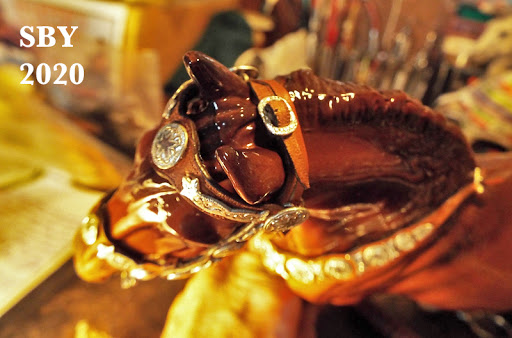 I should end here, yet can't resist including a glimpse from April.  You can get an idea where this set is going.  No. 457 is not done yet.  Engraved cinch rings, their hanging and conchos and their straps, and the Alta Cinchas (decorative coverings) are still to be made; and I've discovered I didn't allow space for the straps' hanging at the front end of the pommel and skirt.  Destruction lies ahead.  [Note from the future {08.30}: There is actually space for the straps to pass between tree and skirt.  No destruction necessary, but some straining will occur.]

I am intrigued by the circus life.  Didn't those old-time circus people live on trains, in narrow quarters, out of chests and boxes, with very few possessions?  Didn't they take entertainment very seriously?  Weren't they free to pursue their highly specialized skills, in the company of others like themselves?

There's light at the end of the tunnel. 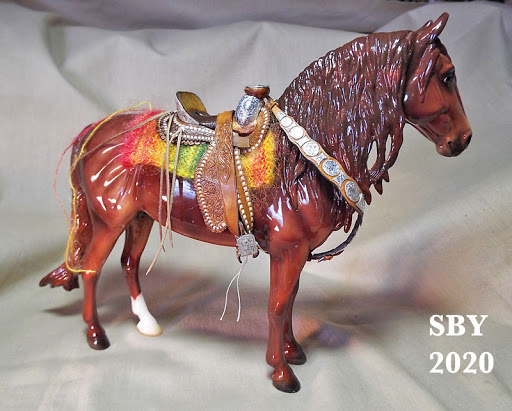 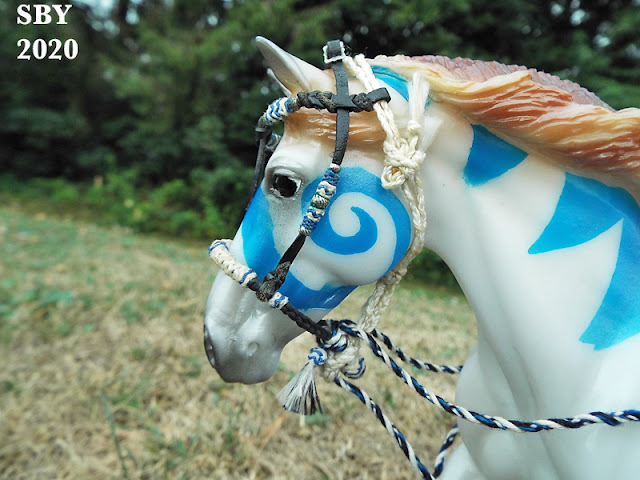 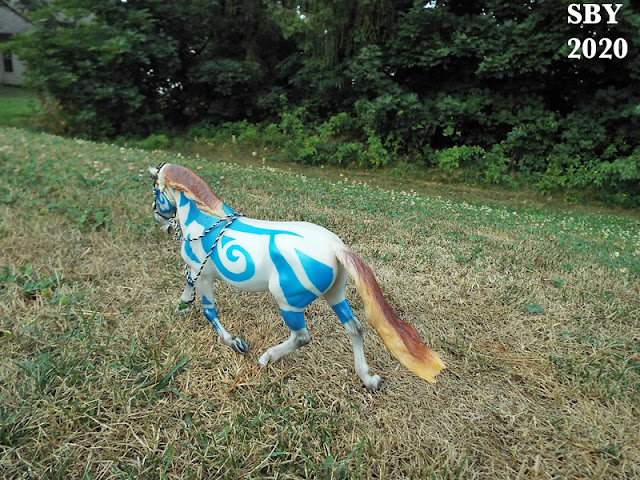 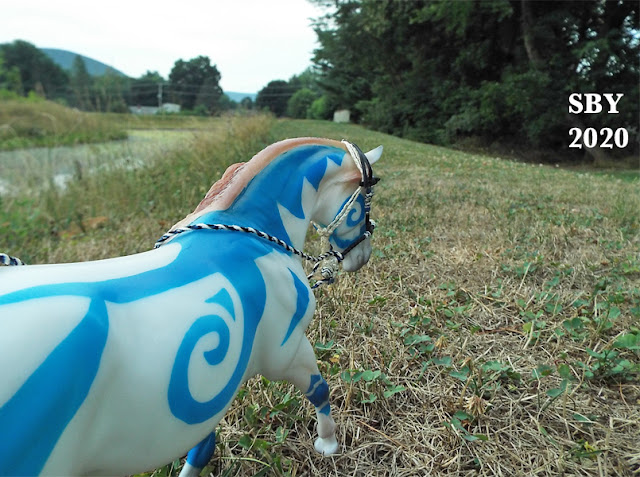 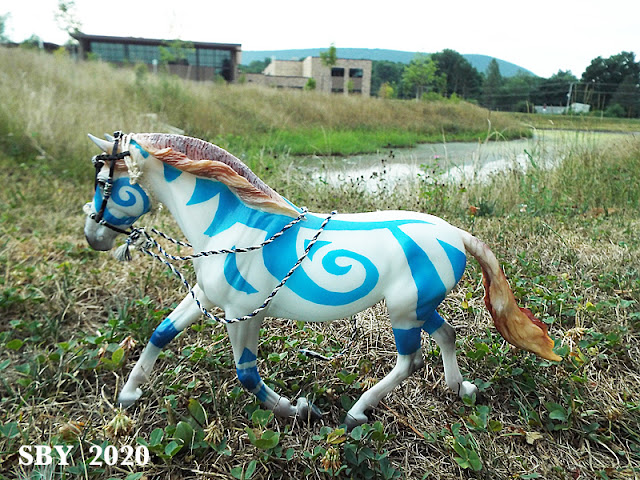 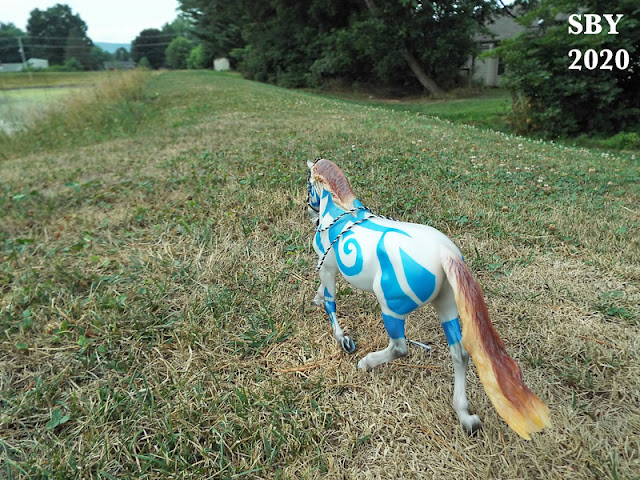 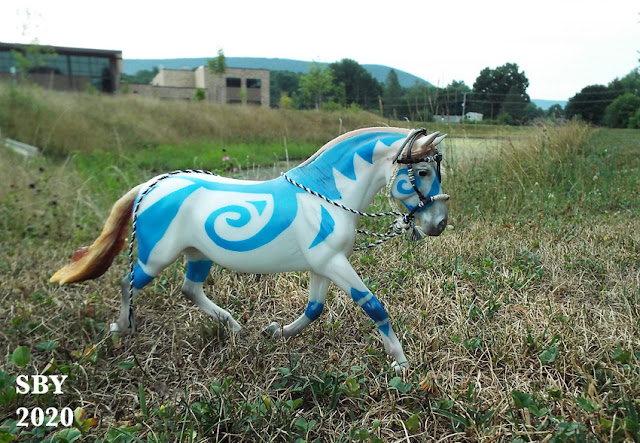 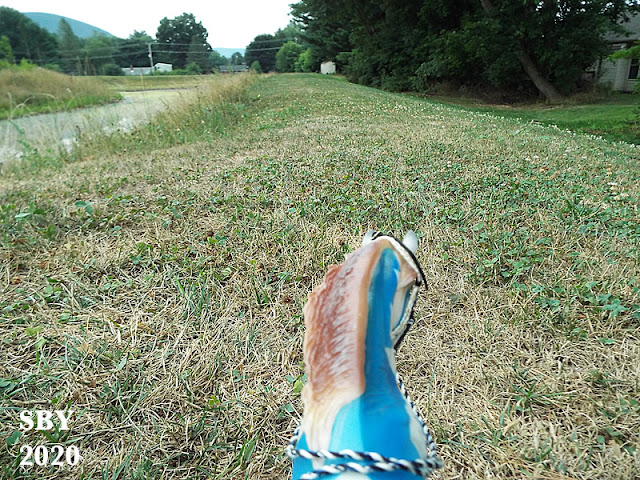 But first, finish a Mexican saddle and do two Akhal Teke sets... which happened to want blue stones.  Some things never change.
Posted by timaru star ii at 8:58:00 PM No comments: