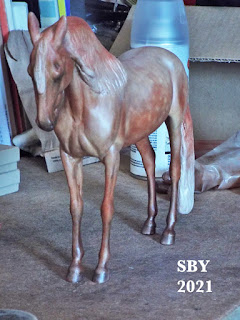 This will be a short post, caught in the rush of things -- swift developments, speeding towards completion!  But when I saw this picture I just had to print it out and study it.  There is so much to be learned here.

Friday morning (19th).  Cleared off calendar.  Sunny yet cold.  The pattern of spraying him in the barn (shed), letting him rest for 10 mins then bringing him inside, and letting him warm up and finish drying (for at least 20 minutes), is by now well set.  All I know is it works.  Last night I mixed up new pastels, convinced that my time off from him was bearing results:  he needed more blue and purple in a darker red, as well as orange for the flame mane.  He was golden but not pink or purple, and there are tints of blue in the red roan I was after.  All this insight was accomplished when a) I compared the photo of Orlik to my reference photo as well as others' red roans, and b) I asked old time painter Kim Bleecker what I was doing wrong.  Bless her heart, she helped me.

My new color, dubbed "Pink Rust," used Red Ochre and some Pearl Ex in Red-Blue Duo.  Although the above shot doesn't depict it as well as real life, it really is red.  This time also I tried to follow and enhance the contrasting parts of him... a little too well, as the vertical shots show!!  But that's O.K.  I now know in a much better focus just where to go next. 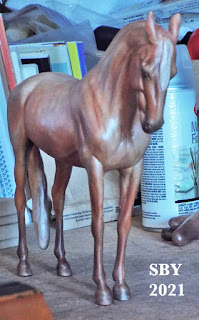 If these vertical pix are strange, it's because they were shot in pretty low light, and then heavily processed.  His off side (above) is considerably better than his near side, at the moment.

These pix did another thing:  They showed me that a simple shift in viewing angle could reveal tons more, and help solve problems.  You'd think it'd be obvious!  Am I closed-minded?!  After 11 months shut up, well...

This revealing angle (below) shows me quite the laundry list. His off fore knee didn't get any red.  Ribs are patchy; his sides need thinner layers of both red and white (Pink Rust and PearlEx micropearl).  The mane looks like it was painted horizontally instead of following his crest; go back and really define where that middle zone of color is.  His near point-of-shoulder is too white; the chest area in general can be light, but it should be unified, more blended together.  Oh and his forelock needs more red as it approaches the poll.  The hair is short there and should be closer to his true chestnut.

The tail  is OK; and I love that shine!! 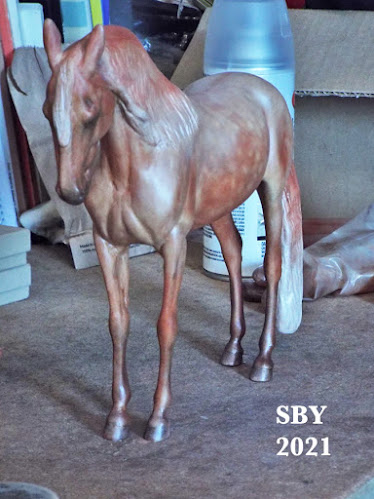 See what I mean??  A laundry list of a battle plan!

The scent of victory...