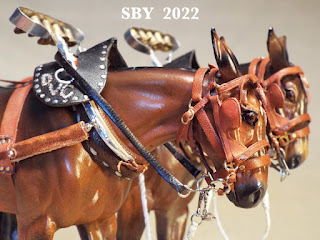 Finished at last!!  This post will cover the final 3 parts:  bells, housings, reins.  From the beginning the question was how I would do those bells.  They were created nearly last, which tells you how hard they were.  I conferred with other tackmakers;  I looked online, I pondered and struggled and conducted thought experiments.  I had people advise me to try 3D printing.  I looked in dollhouse supplies -- did you know you can get miniature handbells?!  I thought about making metal ones.  I considered leather and plastic and Fimo.  Like miniature carousels and model trains, the bells wouldn't -- couldn't! -- ring;  any musical effects must be done with a recording.  In early January I started carving bamboo. 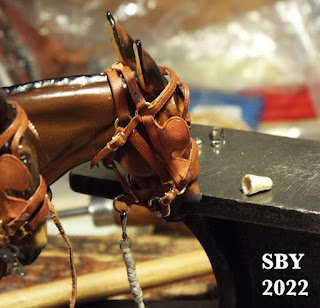 I had used bamboo before, to make a hackamore fiador button.  Starting the Roby Canyon Hackamore.  Narrowing down on wood as the right material, I remembered the glossy smoothness and ease of working with it.  You gotta say this for it, bamboo's easy to acquire.  Just one of those cheap restaurant chopsticks has supplied all my Twenty Mule Team bells.  By the end of January I had a procedure. 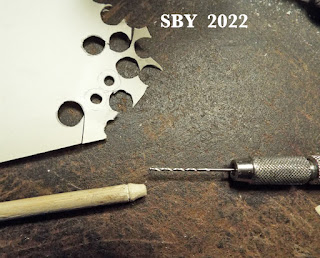 The drill bit is for the central hole.  The paper is an index card.  I needed the cardstock for the rims, as the bamboo was not wide enough.  It's possible my earlier experience with my  Woven Wicker Chair exposed me to the dollhouse miniatures practice of building just about anything from cardstock.  White glue and filing and drilling did the trick, but it took a LOT of filing. 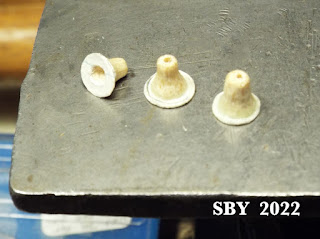 Of the first two bells I made, one was much too large.  Again and again the lesson was driven home about how SMALL these mules and their gear really are!  It was punishing to hold these itty bitty slippery shapes in hand while I filed them down to the correct shape.

Next, paint with PearlEx. 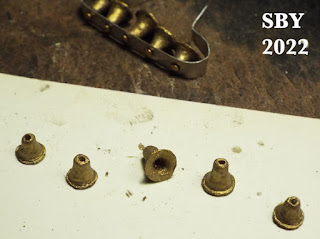 There were many stages of fill and file, to blend the line between rim and bell.  I was using white glue as filler.  A typical bell would take three cycles of fill, dry, file and paint.  Hollowing out the throats took knife-work as well.  I was a bit worried the rims would fall off, but the paint helped. 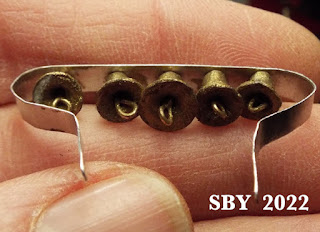 Making the bell frames started out easily enough, went through a very hard stage and then revealed a miracle.   I knew they'd be of aluminum strip.  I shaped them by eye.  Plated pins became my clappers, holding the bells to the frame with a surprisingly nice amount of dangle (it was impossible to affix them firmly).  I ranged the largest bell in the middle and the smallest on the outside edges, just like real life. 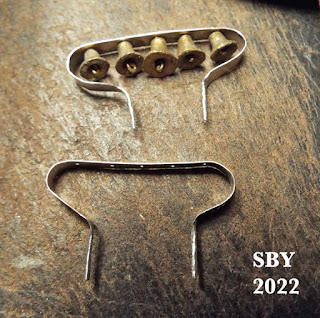 But how to fit the frame tips to the hames?  This was a place that proved to be very difficult and went to the heart of model tackmaking:  it was a pure engineering challenge.

The full scale reference showed little black metal pockets on the outside of the hame tops.

But I had a different collar and hames to work with. 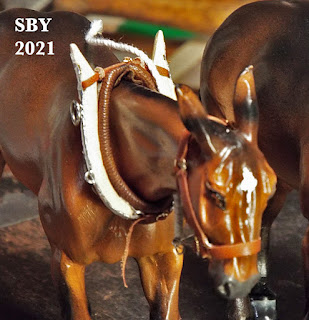 Not only was there delicate silvertape and notches on the outside of my hames (no room for pockets)(no strength either!).  Any adjustment of their angles (bringing hame tips closer together) would have meant a complete re-doing of the hame straps, their buckles and keepers.  I had put so much effort into those straps I just couldn't face that.  I test-fitted my bell frames, and it was plain that their ends would fall inside and not outside the hames. 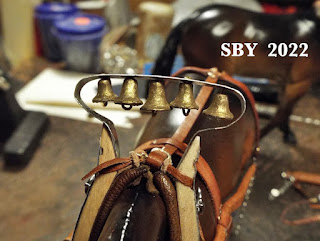 This was the solution.  Here I had room for pockets.  This would work, barely.  The earlier-mentioned miracle was figuring how to roll the aluminum ends into spikes, making the frames stronger, much more realistic and able to fit in any pocket. This curling was done with pliers, amid much squeezing. 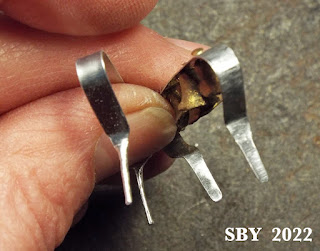 I tested my pocket idea with drafting vellum, which is a kind of tracing paper.  Impatiently, I made another pocket out of very thin aluminum.  Drilling and filing slits into the hame tops was nerve-wracking, not least because I had to take the hames off the collars AGAIN. 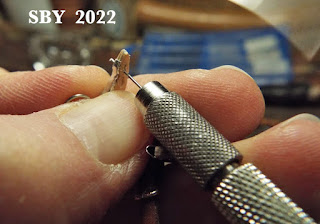 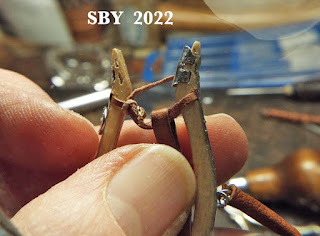 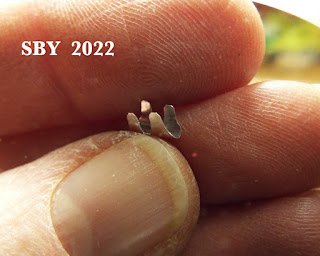 When I painted them black, I was shocked to discover the vellum one (left) looked just as good as the other.  In a snit of pride, I decided to keep both. 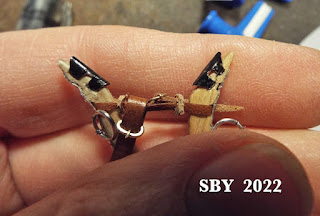 Of many hard parts to the Twenty, this was one of the hardest.  It became even harder when I changed my mind about the black paint, and scraped off nearly all of it.  I should have done that while the hames were off,...   Take a look.  Don't the black stubs sort of stick out visually? 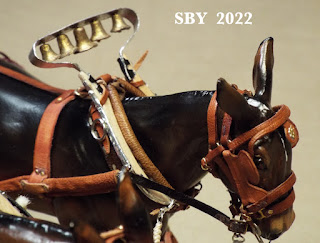 It just struck me as distracting.  The real ones were not like this. 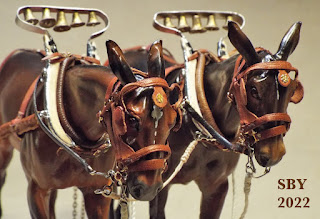 And now look at them. 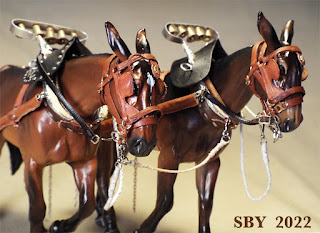 But this is getting ahead of myself.  Were the harnesses done?  Oh my goodness no:  There were housings and reins still to go!  Bearing down...

Fairly early on I had designed in my head how I was going to do the housings, or collar top covers.  Every mule had them though only the Leaders' and Wheelers' housings were spotted.  Tiny silver spots are 'house special' for the TSII.  The letters, for Death Valley Conservancy, were too small to be done with individual spots and would have to be conglomerates (a fine pun).  This photo shows nearly everything about how I made them:  the ikandis from which the spots and letters were cut, the paper pattern for the housing, the tiny stamp for the circle (source: Dad;  braidwork: Sue) and the knife which helped cut them out.  I also used a Needle Chisel, cutting very teeny triangles, getting a 'ripple edge' on the letters. 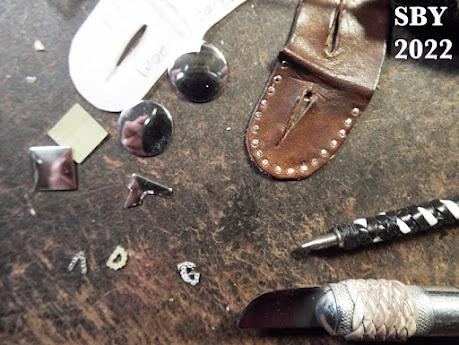 Shaping the housings was done largely by hand.  The scale was such that what were undoubtedly slits in full size became holes and slots in 1:18, to allow for the bulk of terrets and rings.  Heavy oiling and working gave them close to the limberness and flexibility I was after.  A great challenge was whether they would lie close enough to the animals; but, amazingly, they sat pretty much in place.

Their purpose, by the way, is to protect the vulnerable place on the animal from sun, rain and dust. 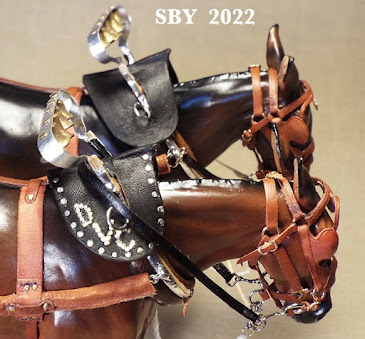 Spacing the letters correctly caused me one of the last and largest, but mercifully shortest, headaches of the whole set.  Let's just say there was an extra housing made, but I benefited from the practice. 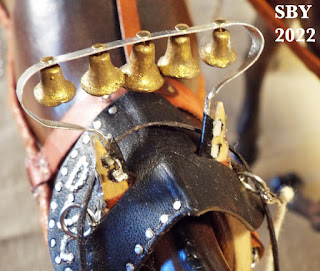 You can tell which pocket is the vellum one; I couldn't get the black off (above, right). 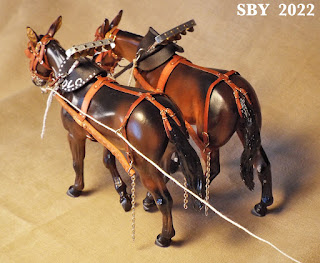 Almost unmentionable so far, (because the last steps are always the hardest), is the making of the reins, lines and various cross-connecting straps.  Each mule has a leather check-rein of closed reins.  Each pair of mules has a connecting strap between them, going from a hame ring on one side to a halter ring on the other.  And the Near Lead, because he bore the jerk line, had no checkrein on the near side, but a short buckled strap on the off, from bit to hame ring.

Oh yes and there is the famous jerk line.  Long strings of teams like this were driven with a single line:  a steady pull indicated 'left,' a series of jerks, 'right,' hence the term.  I chose to make this set's jerk line about 4 mules long, from a white string I'd had hanging around, possibly from kites.  For 7 months I've been telling myself this Pair is all I'm making; so it was a secret unknown stab into the future when I found a ten-mule-long length of line, perfectly in scale, matching this shorter line, and set it aside.  Any old string will not do; it has to have the right twist, an appearance of turns and texture for the scale.
A tiny hook-and-loop of wire to carry the jerk line, and the 20M Lead Pair was done. 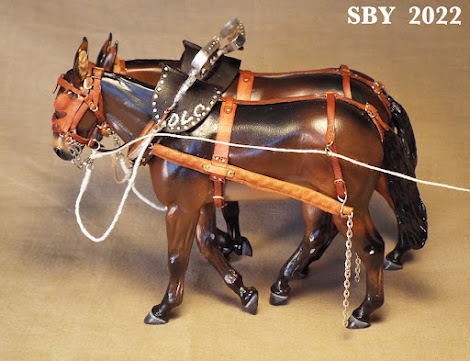 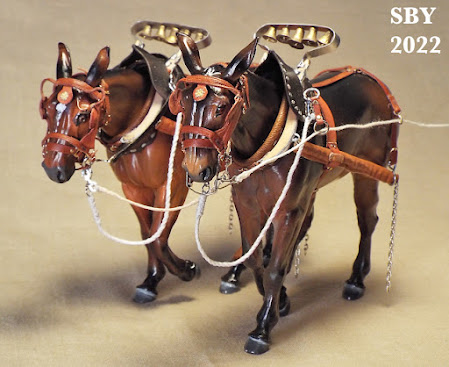 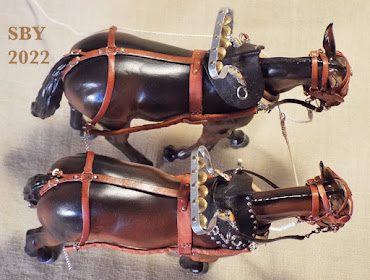 More than 34 weeks went into these.  If I'd been doing nothing else, it should have been a couple of months.  All other mules of the Twenty have no bells,  and most have no spotting on their housings.  Behind my own back, I screen-captured references of the Wheelers.  That would be a challenge; there's a saddle on the Near Wheeler of a type I'm not familiar with.  I make no promises.  I only sort around in the back of my mind which parts could be mass-produced:  the rivets, the buckles, the hames and collars and reins.  Semi-mass production is a familiar concept;  OrthoFlex Saddles first introduced it to my awareness.  We'll just have to see how attractive such a standing order would be when ranged against future braidwork projects, and other tack projects of unknown scope.

I'm looking forward to them.