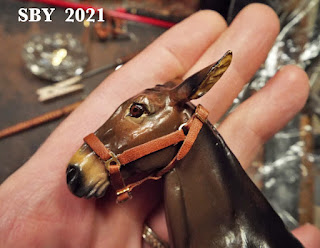 Although technically the bridles were made first, I want to start this series of posts with the halters.  During harnessing, the halters go on the mules first, underneath the bridles.  We are talking about the famous Twenty Mule Borax Team (hence my abbreviation, "20M"), and my reference is a 16-minute video.  I'll include a link at the end.  It is something of a relief to have too much reference instead of too little.

These tiny halters were begin August 20 and were finished on the 27th.  The horse head shown below belongs to a Stone Pebbles, scale 1:18.  I'm using kangaroo lace, trimmed, skived and beveled, and gold-filled hardware.  I found a Rio Rondo buckle for the crown, and I had rings and squares; but I was flummoxed about the halter squares.  Even if they existed out there, I didn't have time to order them. 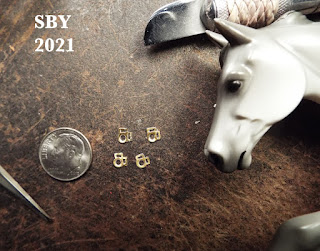 So I made my own.

This is the cool part about being a model tackmaker.  I made them from gloss gold ikandis (a brand name of metal iron-on bling spots), using the smallest tube on my hole punch, my X-Acto knife, my needle chisels and some jeweller's metal files. 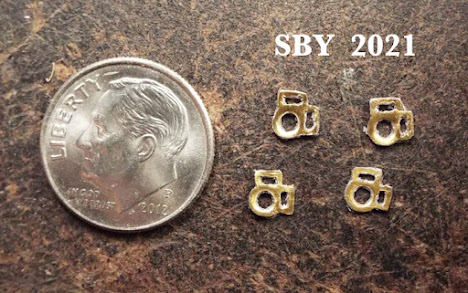 I was pretty pleased with how they came out. 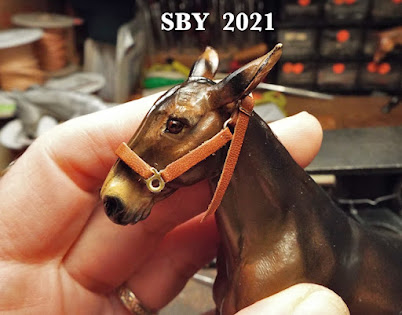 I make my own rings using gold-filled wire (22ga in this case) and aluminum tubing cores, wrapping the wire around the cores.  My ring use is so small and specialized these days that it's just simpler, cheaper and easier to make my own rings for every piece the TSII puts out, instead of buying rings.

There is a square and ring for the halters' chinstraps.  These squares came from Rio Rondo buckles I had cut in half and sent off to be plated.  Alas, I've lost touch with my plater -- I don't know if they still exist. 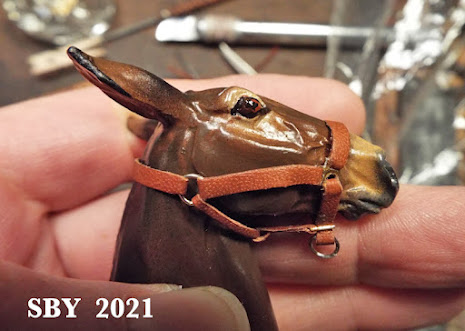 The lovely mules are 1:18 resincasts sculpted and painted by Candy Liddy.  Their names, conveniently carved into their hind legs, are Hubert and Leo.

I don't want to think about how badly they must have kicked during that carving...!! 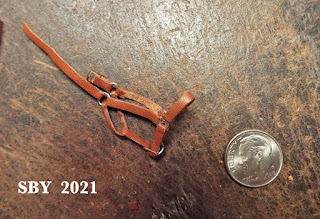 I've always said a change of scale is wonderful as a refresher and to combat burnout.  This scale certainly is challenging for me.  I haven't been this small (nor made halters!) in more than a decade.  But I love how these came out. 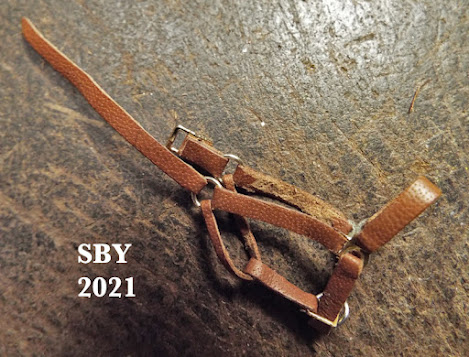 At this scale it is no shame to use glue.  The hardest work is getting the lace small enough:  it takes endless skiving, cutting and beveling, shaving it down and feeling it up, trimming the shreds --- and then doing it again.  It's a lot of hand work, but the only way I know to get it right... and I've been getting it right for a very long time.

Here's my reference link.  Although it features the wagon shop for the first 8 minutes (the first half), the second half is rich with harness detail.

There are other videos of the Twenty Mule Borax Team, but this one sufficed. 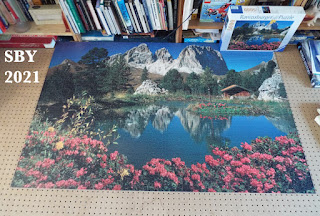 On August 30 I finished the greatest challenge yet in my puzzle collection.  Did I say that wolf's-head was my most difficult puzzle?  Hah!!  THIS has been my toughest -- both the longest to finish and the most difficult to arrange logistically.  Although it looks as though it fits on the board perfectly fine, a puzzle as big as this one needs lots of space for all those pieces.  And I didn't have that space.  Arranging how to work it was just one of the challenges.  But oh!  what glorious fun!  It was worth whatever we paid.

I'm not sure when we bought this.  Certainly after Denmark, and probably from the Barnes & Noble less than a mile away. 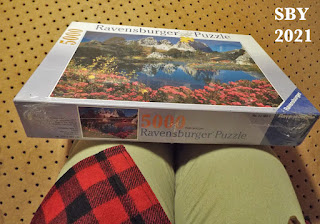 It's been in shrink-wrap for a long time.  The purchase date could have been anywhere from the early 2000s to around 2012. 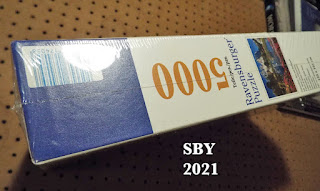 It's true we have another 5-grander but somehow that one was missing the shrink-wrap.  I always said I was waiting for a long winter for this one.  Welp -- Covid made me do it, a deep freeze if ever there was one. 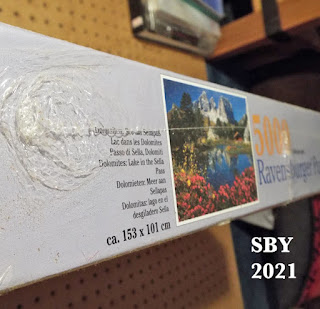 "Dolomites Lake in the Sella Pass."  Those familiar with Ravensburger know that the Dolomite mountains form their most common scenes, their home ground as it were:  their roots.  For a Front Range Coloradan to be staring at mountains is not a bad situation.

I opened the shrink-wrap on April 16.  For the next 3 months, until the Fourth of July, no puzzle pictures were taken.  This is most unusual, and I must beg forgiveness.  One of the tools that made this puzzle possible was a sheet.  (Earlier this sheet was used for a model horse show arena.)  I folded it into the size of the board and stapled it closed -- I had a feeling it was going to stay folded like that for a very long time. 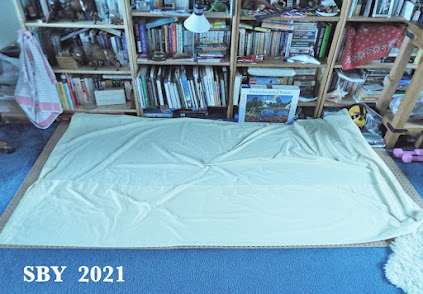 As I've said elsewhere, the sheet performed many functions.  It protected the pieces from getting lost or being directly stepped on, and, over time, from sun and dust.  It allowed access to the bookshelves and daytime use of the space, which was critical:  This is the assembly spot for all our trips.  And it protected against cheating, i.e. doing the puzzle outside of the designated puzzle time, which was right before bed.  Cheating has always been a problem -- call it managing an addiction.  After the border was done, George stopped work altogether and the whole thing became entirely mine.  Many days only a few pieces went in. 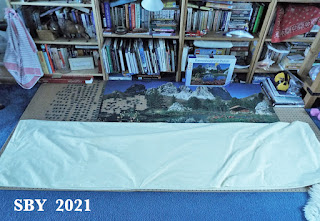 Here is a series of shots, taken July 4, that shows how far I'd come... and had yet to go.  The series shows how the sheet was folded up when time came to work on the puzzle. 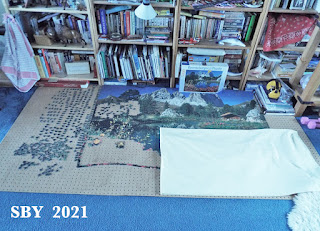 See the yellow heavy-duty flashlight in the upper right?  The flashlight was an attempt to get light where I needed it, as the clip lamp (center) was really too weak.  Over time, the biggest problem was lighting:  "During the day, the light is so much better!" 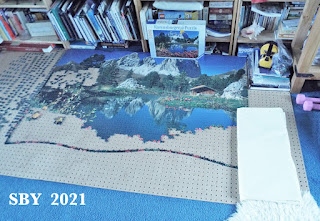 Near the yellow flashlight can be seen a gallon Ziplock bag full of puzzle pieces.  This is how I solved the logistics of a too-small board.  I hand-picked-out every red flower piece and stowed them away, intending to do the flowers last.  This reduced the amount of pieces active at any one time.  Of course, it caused problems when it came time to do the smaller red flowers in the center!  Earlier, I'd also pulled out blue pieces -- there were two bags.  It's a matter of skill telling the lake apart from the sky. 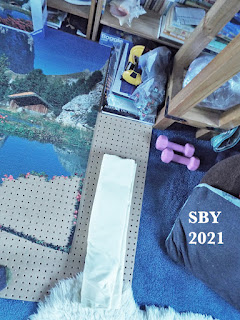 I think the lower, red flower border was not done until now [July 4].  That would explain why I took these pictures at this time;  it was a major milestone in completion.

Here's a view of the whole thing without the sheet.  It's more than halfway done.  April, May, June -- oh, our blessed June!  Beloved, glorious normal June.  In June we went out to eat.  We stayed overnight in another town.  We hiked and passed strangers and didn't mind breathing their air.  June and early July were our real summer -- a few precious weeks. 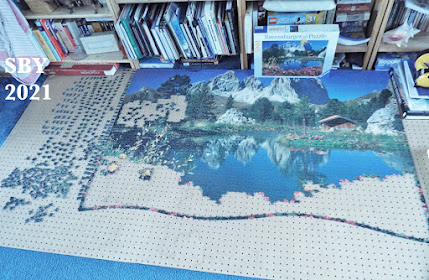 Then came Delta and we were set back.  But that's another story.

My camera does not always behave when it comes to color balance.  This shot is much nearer the real color of things.  Note that the left side trees and mountains are filled in.  This was taken July 9. 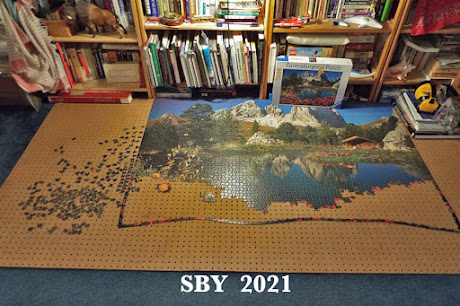 Working on so vast a puzzle is a continuum.  I had hung over this board so much, so long, so intently, pivoting on my hands, that my right elbow had taken fire and became very sore.  It was in June that I had to take it to a doctor and July before I started physical therapy for it.  Diagnosis:  Tendonitis.  Cause:  Overuse.

For me a puzzle is a world you live in.  It is of sufficient complexity to engage your brain yet offers enough simple success to keep you sweet.  Each piece placed is a little jolt of serotonin; it really is addictive.  There are only six shapes to Ravensburger puzzle pieces.  I have my own names for them all:  One-wings, two-wings, four-wings, four-heads, two-heads or standard, and three-heads, which I call boats because they have a downward-pointing belly and symmetrical ends like a boat hull (think canoe).  Two-heads are by far the most common shape. 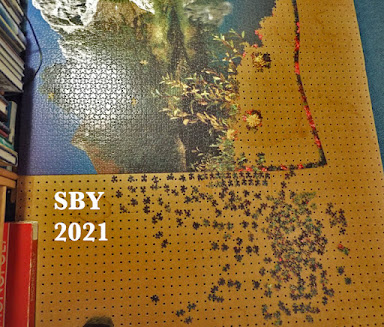 Here's a close up.  Three pieces are 'missing' or not found yet in this area.  In the event it turned out that only one had strayed (it was found under the Monopoly box, if you please!!) and the other two had somehow hid out in the roses/red flowers bag. 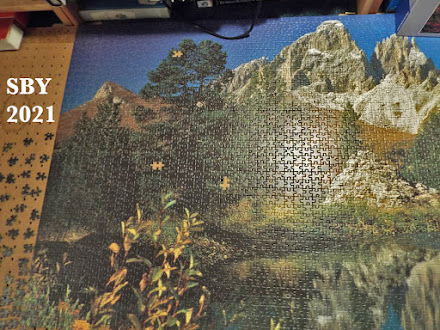 Progress:  I had reached the red flowers.  This next shot, taken July 13,  shows a significant detail: the manila folder.  I use this stiff cardboard to transfer small numbers of pieces about.  I also had arranged many remaining pieces into shape-alike groups, something I do when "the end is near."  At this stage the remaining pieces are the hardest of the whole puzzle to fit, so I group them to make comparisons easier.  This phenomenon is caused by the simple rule that the easier parts get done first.

Note how just the pieces for the bottom quarter of the puzzle take up all the board space.  It really was impossible to lay out all 5,000 at once. 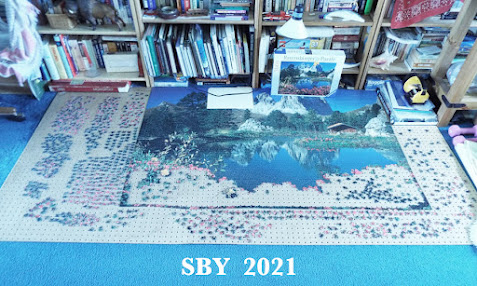 Here's a close up of some shape-alike groupings.  The largest cluster of rows is two-wings (sometimes I call these two-tails) and the darker group is boats.  Pieces are also laid out according to color. 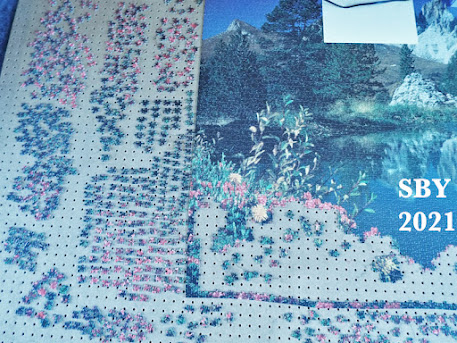 Near the end.  This whole-scene shot was taken August 28.  Much is on view here:  The grey blanket-pillow (I always kneel on something), the Ace bandage piled up on the yellow sheet (for the elbow), the flashlight gone (it disturbed my couch-sitter too much) and a second small lamp seen to the left (unfortunately it also disturbed my couch-lyer).  A small white cardboard piece, originally a candy wrapping, serves as a transfer sheet.  This turned out to be very useful.  It was simply easier to pry up the section of puzzle I was trying to find a piece for and carry it around, comparing it to the shape-alike groups, than to try and find a single piece to match a given hole which was many inches away.  I had never had to develop this kind of technique before;  but I'd never done a five-grander before.

Evening lighting was so poor that I had to use a magnifying glass; it can be seen on the puzzle box.  Light makes all the difference. 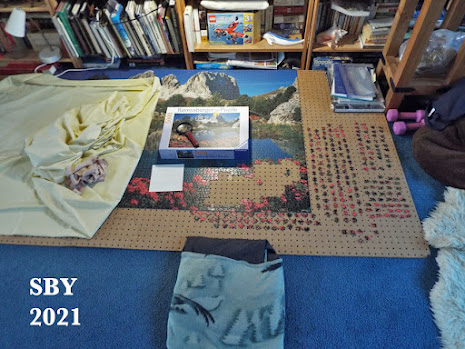 The five-grander had taken me four and a half months.  For comparison, a two-grander, in 2020, had taken us 16 days.  A three-grander in the last quarter of 2020 (you'll have to wait for the Fourth Ten to see it) took me from October 27 to December 2:  a month and 6 days.  George helped on that one. 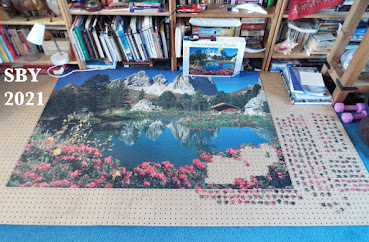 Finish.  August 30.  The whole cycle of cresting hope to enjoyed freedom to crashing disappointment to stubborn resilience was embodied in this project.  Four and a half months of my life are here, darkness and light, hope and horror, disgust and determination.  It will not be easy to tear down.  It's been up for more than a month.  But right around the 40-day mark, it feels right to go ahead and start another puzzle. 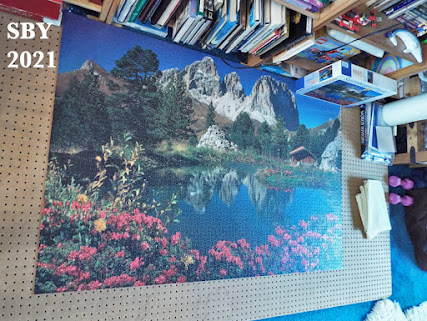 For entertainment dollars, Ravensburger can't be beat.  What's up next?  Can ye believe it:  Another Ravensburger!  But this time, Geo gets to do more than just the border. 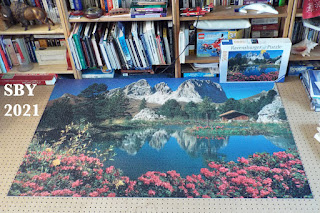