By a not-so-out-of-season pun, a post on both a saddle tree and its skirts could conceivably be called Tree Skirts.  Both saddle tree customization and tooled leather skirts are featured in this first post on the second Clyde Goehring saddle, numbered Timaru Star II #457.   (If you see "CG2" written here, that's what it stands for.)  The first Clyde Goehring set was TSII #451 and was finished in March of 2014.  Its thirteen posts can be found listed here:  TSII #451.

How's that again?  Six years and only 6 saddles finished?!?  Gone are the days when I made 30, 40 and even 50 saddles in a year!  But that was LONG ago, in the 1980s.  The number of saddles made per year has been shrinking, yes;  but we are still making saddles --- and this is our 40th year as a professional model tackmaker.  And four hundred fifty-six saddles is something to be proud of.

Both Clyde Goehring Mexican Parade saddles can now claim the same thing:  Their trees are proving immensely difficult.  Here is what I started with.  It's an RDLC cast white resin tree (right), available from Alison Benuish's The World of Model Horse Collecting:

On the left is the customized tree.  Thanks are due Yet Again to Ann Bilon who gave me the Apoxie.  Once again I got to mix up the grey stuff, wait til it dried and then carve and file 'til there were white chips  and dust all over everywhere, several times over.  It was fun,...  Sculpting like this is a nice taste of what so many other model horsers do in this hobby.  I can see how it might be addicting.
Various files and the X-Acto are used.  The 'buttons' on the shoulders are the beginnings of the domings on the full-size saddle. 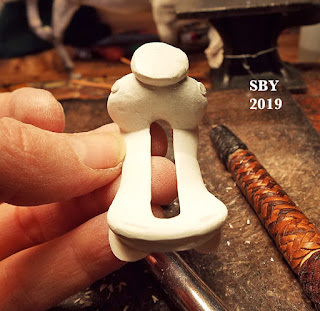 It is difficult to show a model saddle tree.  The shape is so complex one picture does not tell all. 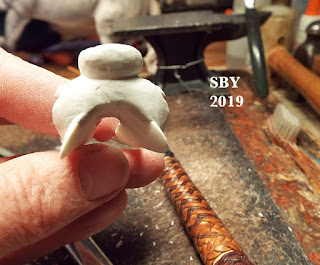 Multiple passes of filing are needed with this difficult part of the saddle.  I am not naturally a tree-user.   However, a Mexican saddle must have one; the tree is an integral part of it, and my references are clear.
Bit by bit, the swells (shoulders) are reduced down to what the real saddle looks like.   Pencil marks show the next phase of filing down. 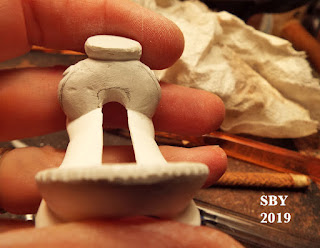 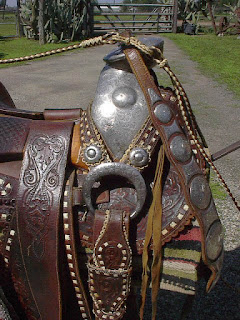 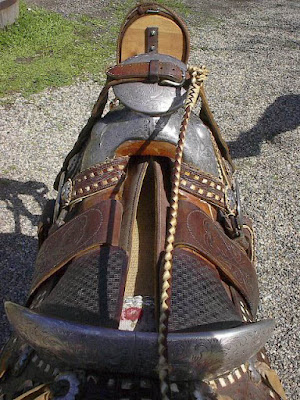 This shape is known as a slick fork.  See how flattened the shoulders look in this raking shot?  [Raking shot=canon fired straight up the stern of a ship.  Blame my wargaming husband for this naval warfare term!]

Filing down such a complex curved shape has to be done entirely by hand.  I'm using the paper towel to clean off dust and the toothbrush to clean the files, which get instantly packed with whitegrey.  The buttons or domings (I don't have a word for this aspect of this saddle.  No other Mexican set I've seen has such a thing!) are naturally the hardest to do. 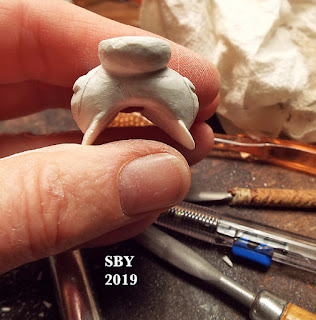 Progress.  The shoulders are smaller and more sloping.  I'm hoping I get those domings even and symmetrical. 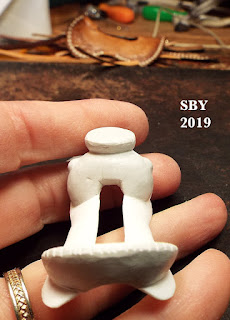 Probably the most sobering part is knowing all this work is not going to be repeatable.  I'm making no casts, patterns or templates of this tree; I don't know how (and have no time to find out).  It is destined to be a true one-of-a-kind, as was the tree to #451.  I'm aware this is frightfully expensive.  Is not tack the last best place for true one-of-a-kind works?
View from the front: 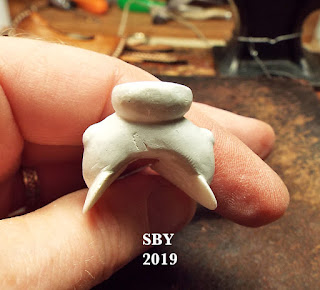 Switching to the cantle end of things, at about this point I realize I need to add more Apoxie.  My old paper seat pattern shows that the current cantle is much too short; and as seen above, there are gouges and divots to be covered. 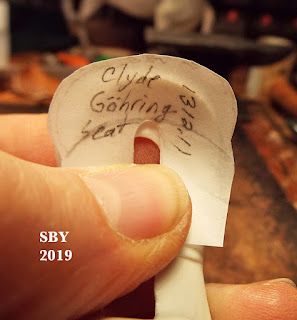 The cantle silver pattern also shows the rim is too short.  It's a little out of focus here, but you can just see the scoring lines I've put in the edge of the cantle, designed to hold more Apoxie.  I don't remember having to do this the first time around. 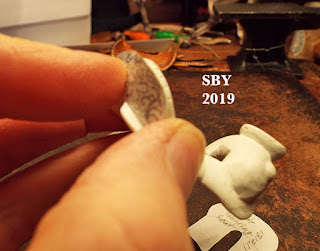 Second round of Apoxie result.  As usual, there's a whole lot more work to be done.  I get to use that marvelous word again:  midmetamorphosis. 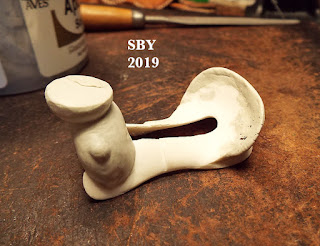 And here's the skirts part.  On my FaceBook I showed the first pictures of the tooled parts for #457, CG2.  Unfortunately I had failed to allow space for both rows, upper and lower, of white buckstitching on the second skirts.  The real Goehring has them: 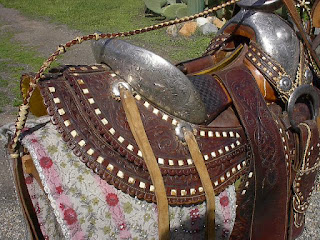 It's hard to justify where my sense went.  On a big piece like this, sometimes you just smash against walls.  I felt the only thing to do was start over, and make two new 2nd skirts.   Below is a glimpse of the creative process.  I used a paper towel to get the basic shape of something that would fit around the tree's rear corners.  (The first set of 2nd skirts had been made without the tree).  The first set's pattern is on the left.  The improved pattern is on the right; it's shorter.

Here we see the older, wrong 2nd skirt.  Notice no room for the upper rank of buckstitching, and no curve to fit into (actually, over) the tree.  The paper pattern beneath it is of the newer, improved skirt, showing how different they are. 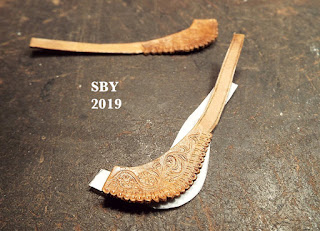 Here they are, tooled and coated, ready for slitting and buckstitiching.  The longer one on the right (below) is the older, wrong one.  No, I have no idea what will become of the rejected ones. 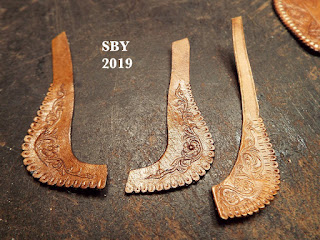 Just like #451, CG2 is being extremely difficult.  I think there are various causes, but one is surely my own lack of discipline.  The saddle has no real deadline -- even Christmas vacation is only a soft deadline.  There seem to be a thousand other things I'd like to do, or that I have to do.  For instance I have counted 8 other blog post subjects!!!  However, those 40 years have set up their own pattern of behaviour.  I am a tackmaker, first and last.  I am so happy on the bench, creating yet another piece that takes great engineering.  We can do this.  There are saddles beyond this one that I'd love to get to.  Even with such distractions as FB and blogging, canoeing season is over (until Thanksgiving, Hah!) and there just might be more time for tack.
Wish me luck.

Return of the Puzzle 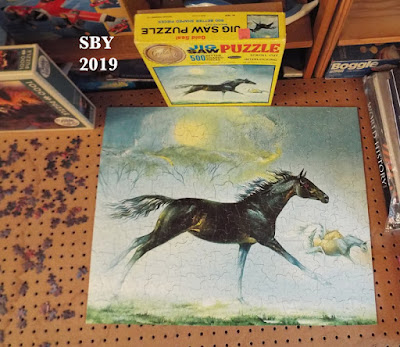 Thanks to my dear husband and his relatively new hobby of buying music online and burning it to disc, a pleasant hobby of my own is returning.  I am a serious jigsaw puzzle addict and always have been.  This blog has seen a long post on the sister puzzle to Ruth Ray's Handsome Witch:  Copper Queen.   That post shows a pic of our puzzle collection, some 150 strong.  It also tells more about this gifted artist.

I quit doing puzzles several years ago, aware that I could not control stopping when I started working on them in the middle of the day.  It was a dreadful step.  I had to drop something, and puzzles and stamps, two beloved hobbies, were the least painful to drop.  For the year 2019 one of my dearest wishes was that puzzles could somehow come back again -- I had loved them so much.  The trick turned out to be George's new habit of doing exercises in the evening, to music he had himself burned to disc.  During that time I could work on a puzzle,...  if I had done my chores and errands and tack for the day.  It made for some together time.

The Reutrn of the Puzzle started a few weeks ago with a gristmill and deer scene -- appropriate for fall hunting season. 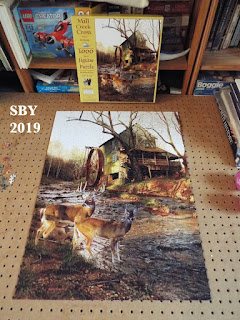 Here in central Pennsylvania there is an Amish grocery store, the next valley over, that carries puzzles.  I am well pleased to report that here at least some things don't change:  There are great new jigsaws being made out there.  Two brand names I can recommend are SunsOut and Cobble Hill.  The Gristmill puzzle, a SunsOut product, is of a painting.  It was a beautifully difficult puzzle because of the camouflage of everything.  Even the deer are of multiple shades of dark and light.  George does the edges and the easy parts, and I do the hard parts.

We know which member of the family added this one to the collection.

Chris Cummings did this particular painting.

I prefer paintings instead of photographs for puzzles.  They have so much textural detail.  My favorite jigsaws will always be the grand old Springboks of the 60s and 70s, followed by the great classic artistry of Ravensburger of Germany.
I'm still looking for an old ('vintage' is the search term) circular jigsaw of a farm scene with a huge cottonwood tree, a white horse in a pond and a pink blooming tree in the foreground.

House rules are that finished puzzles stay up for 3 days and are photographed.  After that, they return to their boxes, pieces well bagged to protect against humidity and mold.  If the box is particularly valued, the box is bagged too.

Someday I want to blog about how one Springbok puzzle inspired my TSII horse head logo.