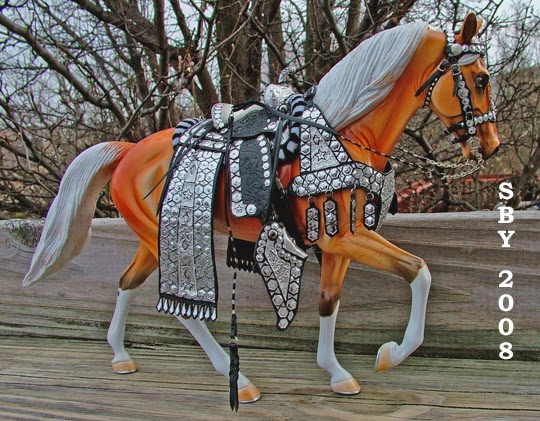 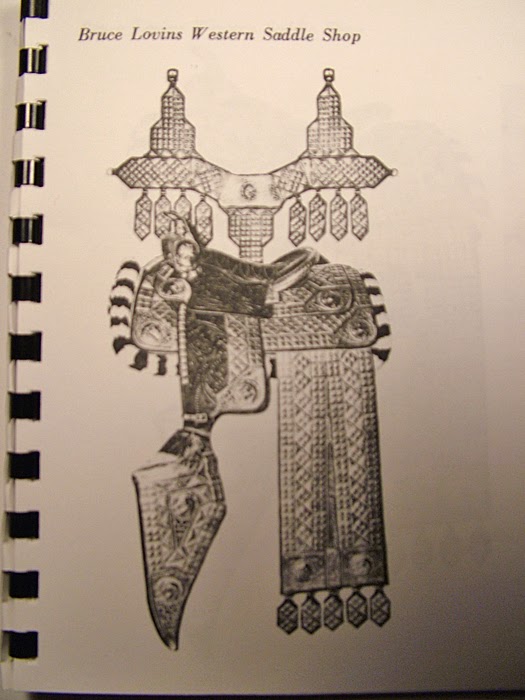 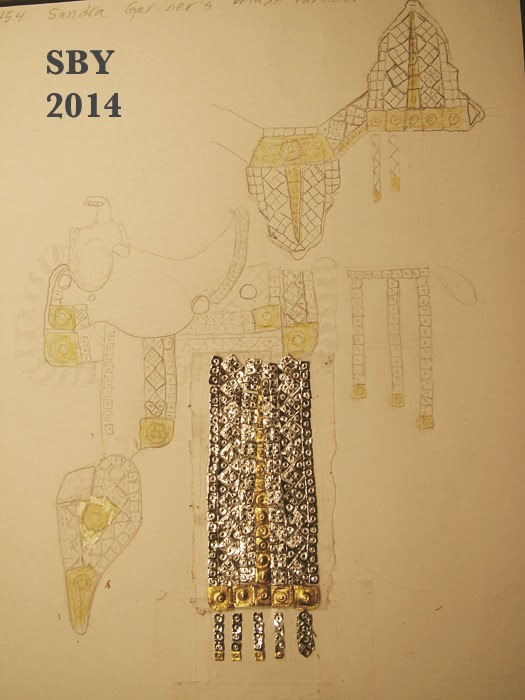 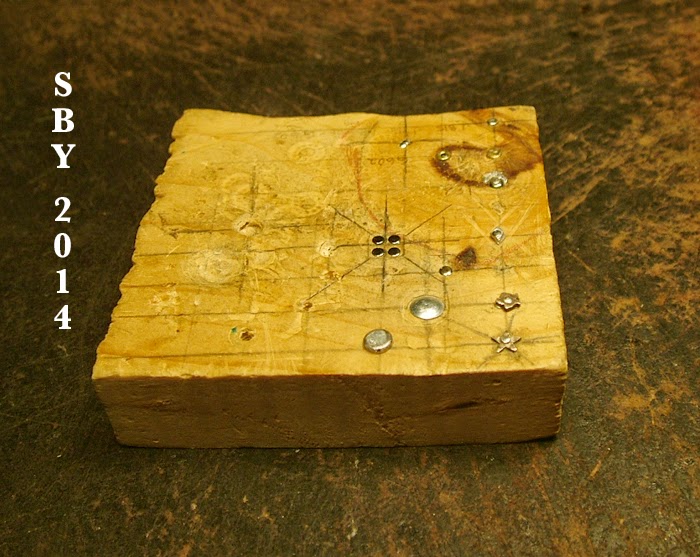 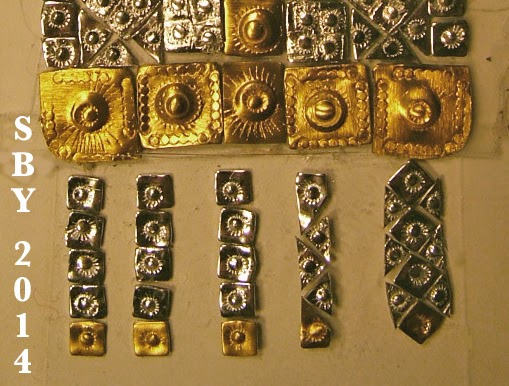 With much excitement and pride I present:  TSII #453, Feldman's Roper, nicknamed the Roseleaf!  Finished last night, this is the third saddle I've managed to complete in the year!  It does feel like I'm finally back in the saddle, -- dare I say.

This morning the lighting conditions were perfect for a few railing shots.  I was unable to resist tacking up Valhombra.  He is coming with me as Stowaway to Didi Hornberger's show this weekend (I leave today).  Every show has its stowaway.  A stowaway is a horse that isn't showing, isn't for sale, isn't exhibiting or doing anything useful, but who has to come anyway.  In this case it's because his wife will be showing. 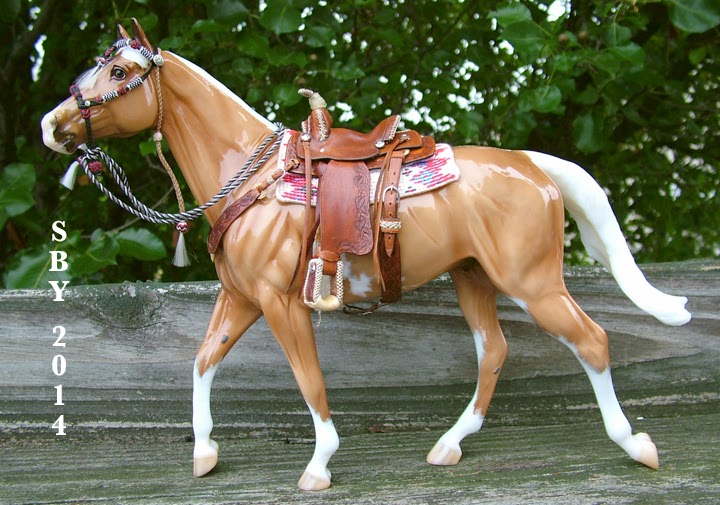 This saddle was built on the ISH, but one naturally wants to try it out on other models.  As it happens I have seen my population of Carricks go from 1 to 3 in the past two weeks, so this mold is on my mind.  (The other two are Bonne Fete and Travis.)  It's a good test of a new piece anyway. 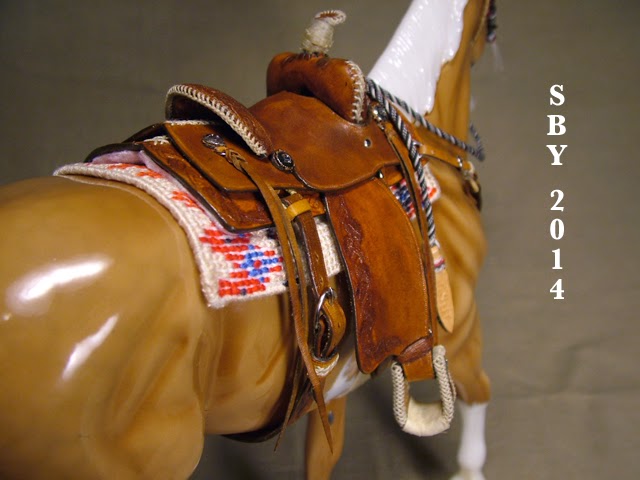 One of the more obvious new tricks of #453 is the rawhide wrap around the horn.  As before stated, I chose to go with the simple approach.  This is ostrich rawhide. Another noteworthy aspect is the blanket.  I gave the customer the choice of existing blankets that I had made, or she could custom-order one.  She chose this one, a very special Reinata of Chris Armstrong design.  It is the one featured on this blog last year: Blanket Kit.

Valhombra makes a striking pose when taken from the front:  almost too striking!  That front foot tends to get exaggerated: 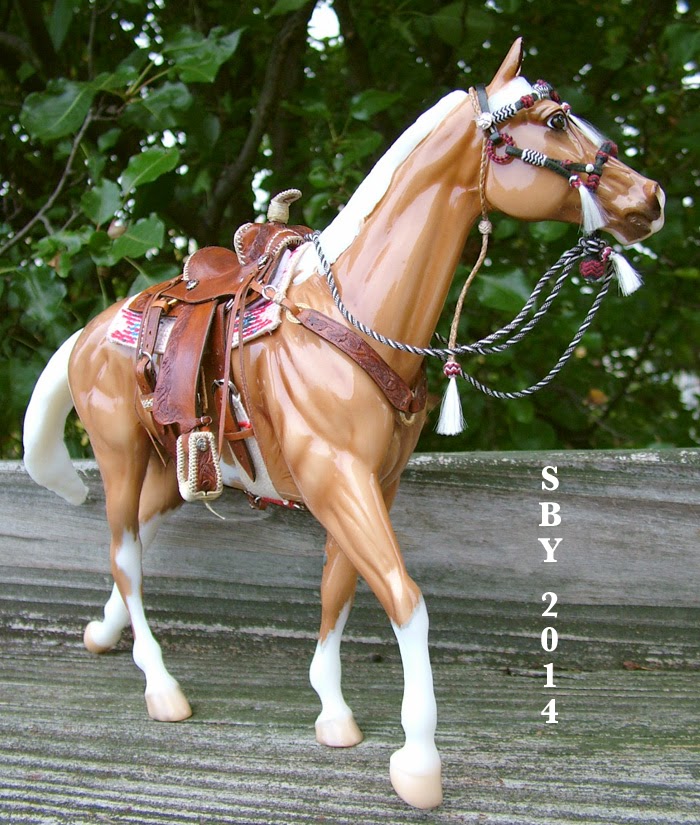 Still this is the best way to see the breastcollar.  Sorry, the hackamore has nothing to do with the saddle!  The colors matched and it was my own.... that's all.  Earlier, last night, we were shooting the saddle alone: 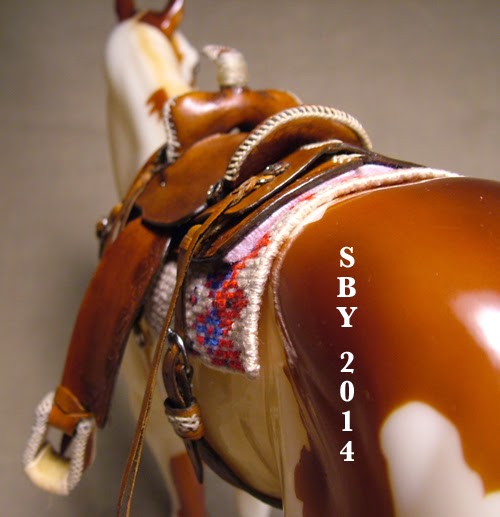 This is the best way to see that there is tooling under the cantle -- and it's not such a great view.  You'll have to take my word that there's rose leaves and the initials "TSII" under there.  Our saddles are all signed and numbered on the base plate (bottom skirt), UNDER the fenders, with number on the off side and SBY and the year on the near side. 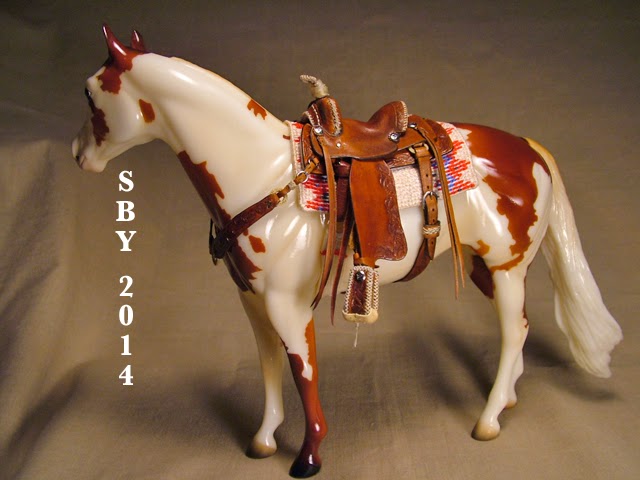 If ever there was a color to fit the order, it's this horse!  Stone's Ima Hustlin Breeze from 2003, but in my herd she's called Rayonnant.I think the tackmaker, like a sculptress, sees the saddle most often and best from above.  This set's seat reflects that. 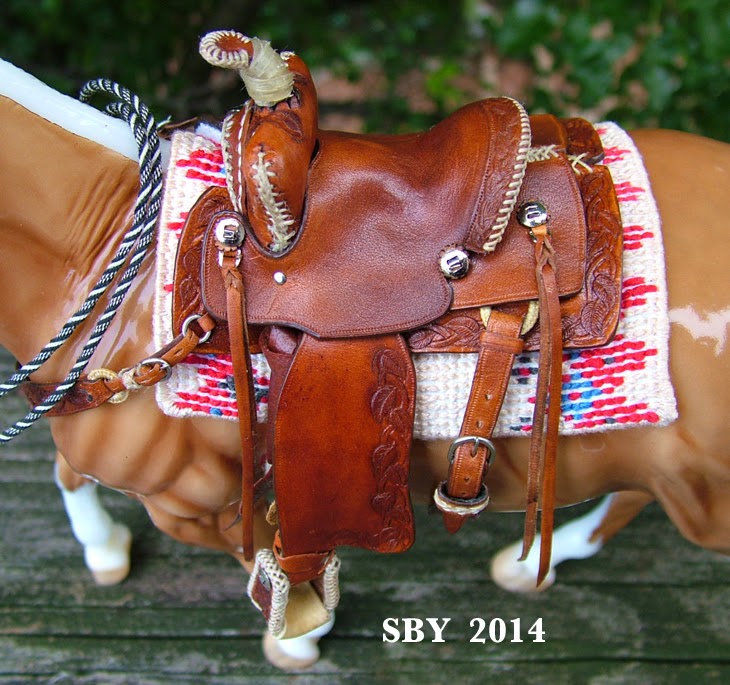 I tried so hard with this seat.  There's a three-layer sandwich of a tree in there, part metal, part leather.  It's not something I'd mass-produce; I admit, it needs work.  This piece truly is one-of-a-kind.  If, after you've spent months struggling with a saddle and finally finish it, the first thing you say is "I wanna do it again DIFFERENT in x--x--x--"  then you're a tackmaker!!
As it happens, next is a parade set, so I'm one happy camper... for that and many other reasons! 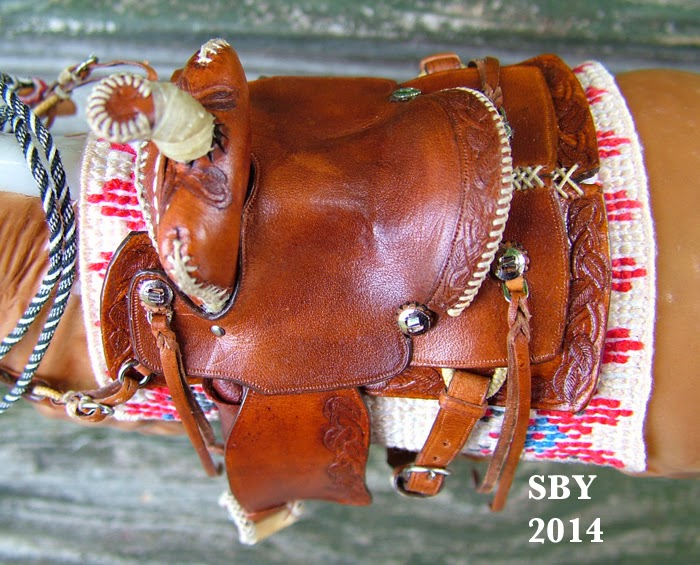 The braiding on the back cinch keeper is something I've only done three times before.  It's based on Grant's applique braid of 2 passes. And now for something different.  I always like to see other folks' backyards and views, so here's a small entrant in the Scene class:  my own. 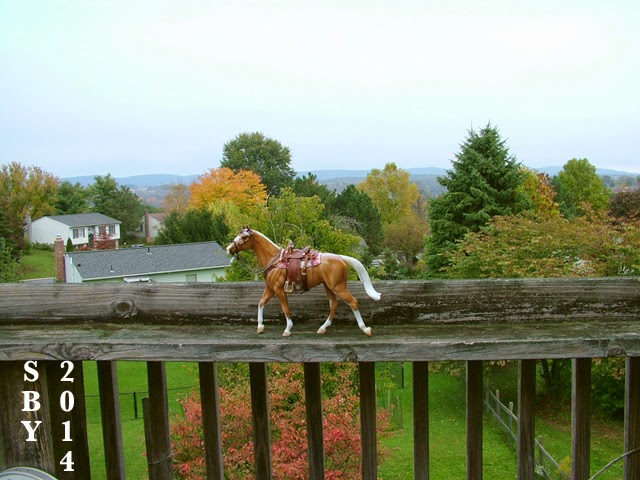 Rather green for October, eh?  but wonderful.  That's Bald Eagle Mountain in the distance.
Coming soon:  a post on stable blankets!  Keep up with my news on our Tack Orders page, as always.
Happy tacking!