What's new here is the recording, not the playing.  Clearly I've been playing for years, purely (just as clearly) as an amateur, solely for myself.  David Thomas Roberts is an American composer of ragtime (amoung other things), born in 1955 and operating out of California.  This rag is so perfectly him that I've fallen madly in love with it and have been playing it for weeks.  The scary thing is I've only just now discovered it, even though it was published in 1979 (!).  It's in his Ragtime Compositions Volume 2.  Maybe someday I'll share Volume 1, all of which are just as amazing and beautiful.

The piano is a Harmon & Wellington upright, built in 1909, purchased by my family in 1966 in Denver, where it was made.  Last tuned about 3 years ago. 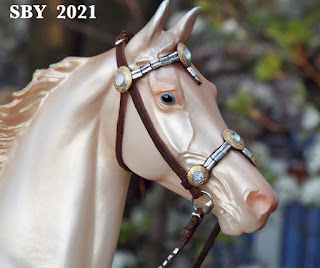 One of the (many) reasons AT4 has taken so long is that I was wholly unprepared for how hard it would be to mount a light-colored stone.  This set intends to use aquamarines, while all my other Akhal Teke sets have used dark stones or the equivalent.  AT1 used emeralds (Brasenose's), AT2 carnelians (painted) and AT3 had sapphires and rubies (Sloan's).  Each gemstone was backed with silver tape.  Using silver tape gave sparkle and depth and actually enhanced the colors.  Why shouldn't the same trick have worked?!?  Imagine my total surprise when I first inserted the barely-blue aquamarines into their tiny bezels and got... no color at all. 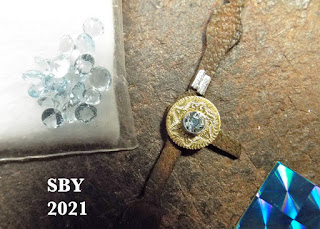 This was a poser!  I'm sorry I don't have a picture of that first step -- you'll have to take my word.  With what can only be genius, my husband suggested backing the stones with blue prism tape.  (My customer also suggested blue paint, earlier.)  I gleefully jumped on these excellent ideas.  I made up a test mount, photo'd it (above) and sent it to the owner for approval.  I was sure I'd solved the problem.

At the same time I made up tests with silver (pearl) prism tape.  I had no other colors of prism tape which were even close to light blue or silver/white/pearl.  The silver tests had a more interesting return.  The stones accented a flash of color in one facet and nothing elsewhere.

Here's the second attempt with silver:

I didn't like the overall greyness of these silver experiments as compared with the turquoise blue, so voted them down.  I was sure the turquoise prism tape would work.  I went ahead and set the browband's three stones that way.  I used clear nail polish as my bonding agent.  Oooopsie again:  When dry, the polish completely consumed the facets and the whole stone turned vivid strong turquoise, exactly the color of the prism tape!!

Oh I didn't see that coming.

Now what!!??!!  I don't like to say how many failures came next.  (Again, no pix exist of the strong turquoise effect.)  The turquoise was beautiful but not what my customer had asked for; indeed, it wasn't what I had in mind at all.  For the artist must always have a vision to follow, and I could see that vision quite clearly...  I just couldn't quite reach it.  I tried and tried.  Eventually I tumbled to the fact that I was always viewing the aquamarines against a WHITE background.  They were so pale a color that that's the only way they showed up at all.

So I tried white. 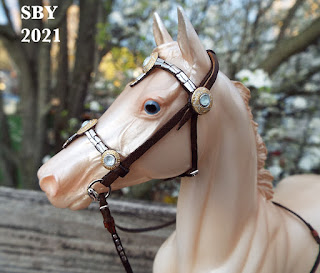 At first I used Gesso.  I had to reconstitute my much-dried-out old jar, what fun.  Then I painted the inside of the bezel as well as the back/bottom.  I set the stones and waited for everything to dry.  At last I was on track:  Finally this gave me the result I was looking for.  There was a slight chalkiness which I hadn't counted on, visible at close range.  It gave the stones the most indescribable smutty pearly glow.  Rather than upset, I was pleased:  I knew my customer's intended horse was Uffington  :)  and the White Horse of Uffington is a chalk horse if ever there was one!!  After all what is Gesso!!  But after that I put in tiny pieces of white paper - glossy.  Now I was satisfied. 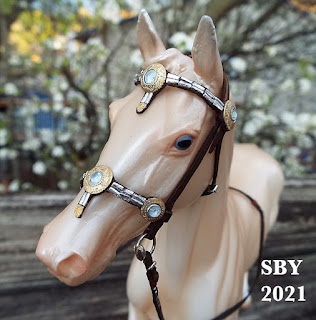 Of course this bridle is unfinished, absolutely in progress!  The cheeks still need their silver bars, and there should be a chinstrap for the bit.  Then there's everything else:  the cape, the 2 neckpieces, the breastcollar.  I had to jump that first hardest jump, solve the color problem, before all else.  Tack rarely fights so hard and I've never had a Teke set fight like this.  Despite its taking so long, I felt the old thrill of justification.  The problem was worthy of my deepest skill, and I still had it in me to rise to the challenge. 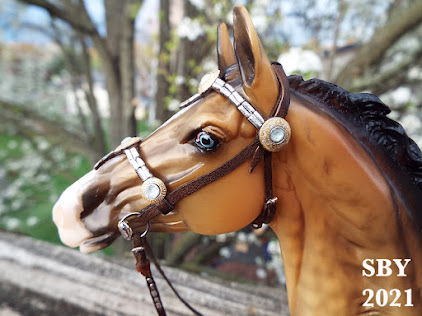 Naturally, no one has an Uffington yet, so I photographed it on the only adult Breyer Perlino I had, Shazada my Lonesome Glory.  This turned out to matter, because Altynai/Talisman was a much more difficult color to shoot it on.  Somehow his buckskin coat just didn't bring out the subtleties of the light blue.  He kept overexposing things.  The Perlino had tones of white, pink and gold in the coat that wound up mattering very much.  I chose the ratio of gold to silver in the overall design of AT4 so as to set this off. 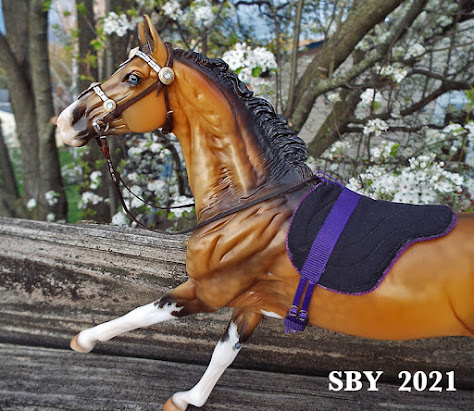 Sized for Altynai, colored for Uffington:  This is a dream set, all right.

One cause of my rather slow progress is an injury.  Somewhere in mid-March I damaged my right elbow - I can't even remember how! - and it's been paining me to lift and hold, to squeeze and manipulate.  Using a spray can, for instance, hurts.  Is there such a thing as frozen elbow?  What a slow healer I am.  I see a dr. in May; I'm just tough enough to hold out til then. 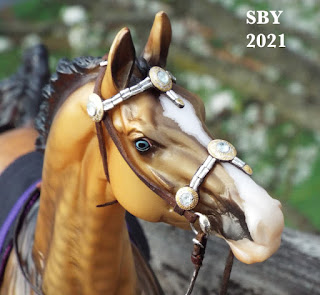 Another cause of slowness has been my ridiculously late Christmas letters (!), no longer Christmas but quarantine-caused.  I'm through about a quarter of them.  I seem to have only a few hours a day (the rest is maintenance) and it seems to take an hour just to do 3 letters.  Yet another cause is plain ol' Quarantine Blues, something I'm sure every artist can understand!  We still have questions centering around naturally low white blood counts such as mine.  (Yes, I've asked one of my Drs, but she doesn't know.)  We can only wait, and waiting is....  hard.

On the happy distraction side, I've been totally entranced and had a great deal of time consumed by volcano-watching.  Below are a couple of the best videos on YouTube I've found in the past couple of weeks.  Each one will throw a bunch of side links and some of those will be the live feeds.  Enjoy!

In an attempt to darken Talisman wearing the unfinished AT4, I changed my camera's white balance.  But I think it got too dark.  These last pix are unprocessed. 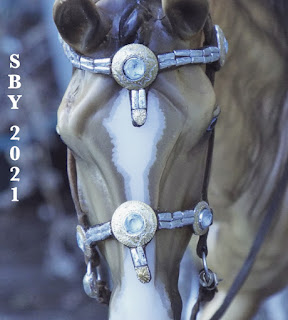 For the first time on an Akhal Teke set, I am using two courses of silver bars for the browband and noseband.  The set just seems to need more heft and majesty for the larger horse.  It really is hard to photograph this!! 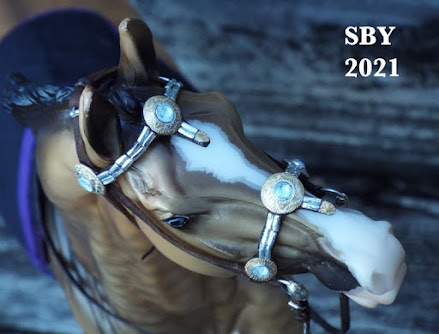 I am  deeply thankful for patience on the part of the owner.  I am well pleased with how it's turning out. 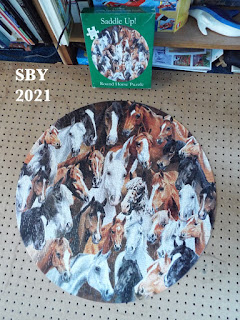 We interrupt our scheduled Ten Puzzles At A Time of 2020 to bring you my most recently finished, and most controversial, puzzle.  This little rat is guilty--!! of making me swear I'll sell it at the first opportunity!  Of course every collection of jigsaw puzzles has some hard ones; mine certainly does.  Hard does not necessarily mean 'bad.'   Twenty-twenty's hardest puzzle was also one of the most interesting, and I certainly plan on keeping that one (the Wolf's Head PhotoMosaic); more on it later.   But this round horse-head puzzle, from a reputable company (or so I thought), is most definitely... umm,...  not a keeper.

What makes a bad puzzle?

After completing this one, I can say that first and foremost, for me, even above the picture, the cut matters.  I use the term to refer to how the pieces fit together.  'Cut' covers not just piece shape and size but quality of interlocking and the feel of the fit.  Earlier puzzles I've reviewed have had loose cuts; the Copper Queen is Exhibit A.  Copper Queen puzzle   Although in her blog post I was quite free with criticisms of the cut, I hope it is clear that I love the puzzle regardless -- I would never sell her.  Copper Queen and her sibling puzzles have a historically important and now time-tested cut that has proven to be (as later posts will show) desirable for its own charms.  But Saddle Up has got the worst cut I've ever run across. 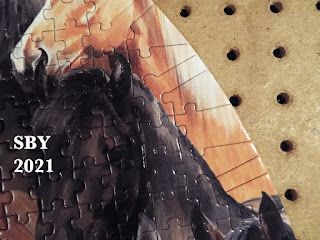 First, there's the actual edge.  Rarely does a successful cut have straight lines on an edge piece.  I know they did this to accommodate the circle; but it seems cheap.  Think those little noses are good grippers?  Think again. 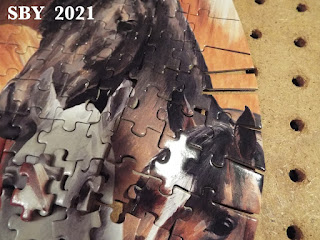 The slightest push with my hand, and things crumple up.  There's no holding capability.  This puzzle does not stick together whatsoever.  Part of the problem is how thin these pieces are.  Did I mention cheap?  When it's time for teardown, one swipe of the hand, one grabbing clutch will do the whole job!

Current Inc. is a stationery company.  I've used them for decades for address label stickers and for checks.  They're in Colorado Springs, which is wonderful for this native Coloradan.  I'm pretty sure we picked up this puzzle in a local restaurant in PA about 7 years back.  Circular puzzle, artist painted horse heads, thousand pieces:  Can't go wrong, right?? 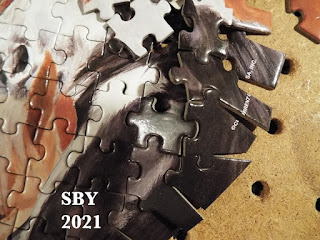 You can't pick up (or lay down) a piece without holding down all the other pieces around it with the rest of your fingers.  It's incredibly finicky and delicate, and it's almost impossible to shift around finished sections.  It needs to be put together in a place with absolutely no disturbance, which my living room floor just isn't.  For somebody who values the feel of piece placement, this is too much work for too little reward.  The scale of this puzzle was another challenge:  the box picture is so much smaller than the puzzle that it really is hard to work.  The scale was acceptable to me (the old pro) but might be off-putting to a novice.

And then there's the picture itself.

What at first glance looks like a lovely montage of horse heads turns out to be another cheat.  Saddle Up has 2 cases of twins, 3 cases of triplets and one set of quadruplets.  There's only one word for this.  I've been suckered. 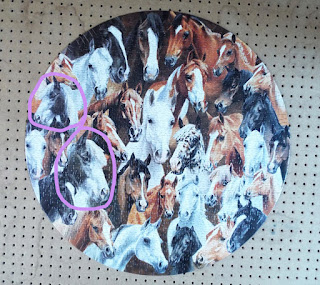 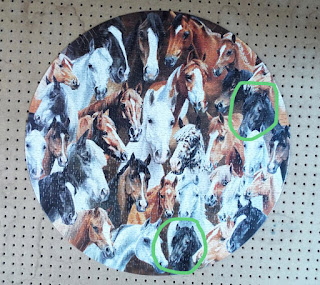 First trio, black heavy-hunter type with a blaze, one reversed: 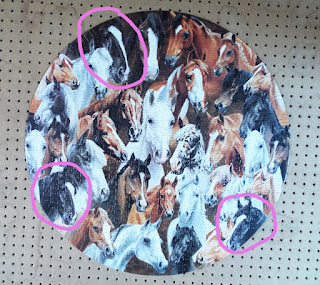 Second trio, white-grey with a pink and grey nose, one reversed: 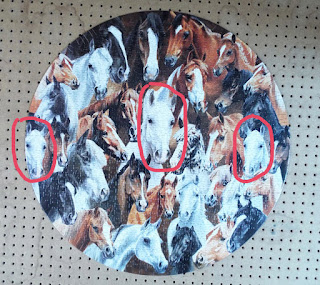 Third trio, calm bay or dun with blaze, one reversed: 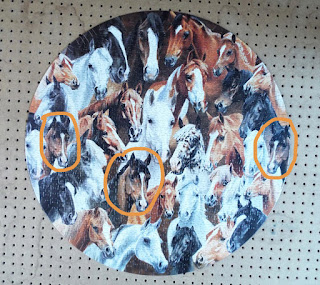 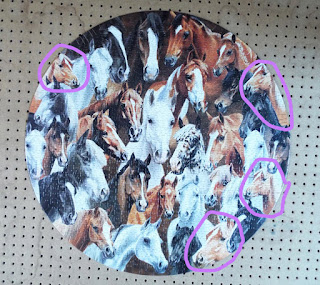 For all that, the Appaloosa is interesting, and I love the two chestnut foals.  The dark bay Dartmoor Pony (two o'clock position, just NE of the Appy) is charming.  The textures are different and so are the lovely warm colors, mostly.  The Pinto, above the Appaloosa, is a strange beast, looking for all the world as though the artist did not really understand tobianos or overos.  There is no artist name on the box, which is all to the good. 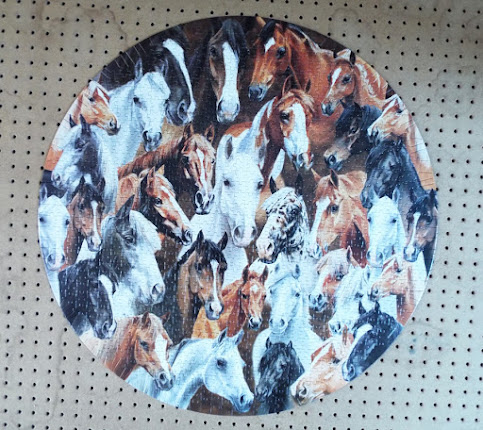 I'm all for supplying the horse-loving little girls of the world as many puzzles as possible.  But if this is their first one, be prepared for a young flourishing interest to be rudely disappointed.  The glory and reward of a well-made puzzle is not present here.  It got past my filters -- I grant that -- and I've worked it twice, the second time just to make sure I really didn't want it. 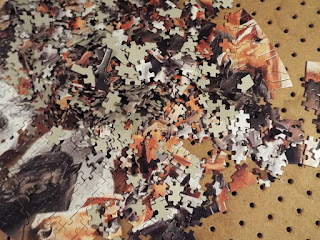