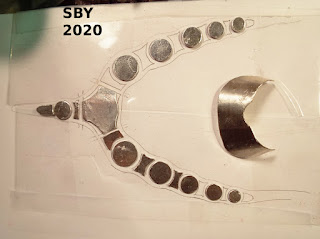 Work on TSII #457, the second Clyde Goehring Mexican Silver Parade saddle, is recommencing after more than 2 months.  I know, I know!  Much happened in that interval,... including finally losing my Mac mini after a long battle.  I made the binocular cover and took two out-of-town trips, each one multiple weeks long, amoung many other things.  (November 17 - January 23.)  During that time a whole new strip of Argentium arrived (see below).  Even though this year will see an important milestone in my age (I was born in 1960), at the moment I feel much more in control of artistic pursuits.

Above we see one of my favorite little tricks in making such an elaborate breastcollar:  the use of packing tape for controlling the pieces.
The packing tape is laid down sticky-side-up, itself controlled with Scotch tape (the sides).  As each of the 26 concho pieces is cut out and filed, it is stuck in place as a temporary holding measure.  This is the third time I've drawn up this particular breastcollar pattern! --- originally developed in 2013, based on the real thing (the Clyde Goehring is a portrait saddle).  If the conchos don't look like they quite match their drawing, it is because I'm actually matching them to the leather breastcollar, already tooled, but not shown.

The large curved piece to the right is the back of the cantle.  This is the largest single piece of Argentium on the whole saddle, and a real bear to work with.  Already it is seriously bigger than the first time.  It will take more work,... and generate more tears!,... than any other part of the saddle.  (Except maybe the Alta Cincha; but more on that later.)  TSII #457 is a bespoke order and not for sale.

Here's my Argentium before I started cutting it up.  Two inches by six inches, 22 gauge, costs approximately forty dollars (wholesale).

Earlier progress.  The work is slow and hard.  Each piece is made by hand, cut out with wire cutters and small punches and then filed a lot... which means holding it with fingernails.  Often I am hammering the conchos flatter and larger, resulting in a thinner gauge.  I try to catch the clippings, never mind contamination by masonite dust.  I am spurred on by some mad idea that Rio Grande might melt down my waste chips, roll it out and return it to me as usable metal.  Minor contamination would not bother me at all!! 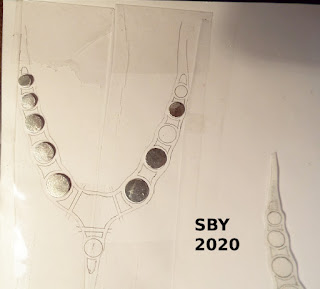 Here is a link to one of the previous (2013) posts on the making of the breastcollar to the first Clyde Goehring, TSII #451:  Goehring Breastcollar Rough Cut

As bonus, here is a shot of the skirts of the current, second, incarnation.  Put this down as a true Sneak Peek.  Differences between my first and second Mexican Parade saddle are accumulating, and this is one of the more obvious:  the tiny patches of leather and buckstitching that cover the join between the two halves of each skirt.  I call them Hatch Patches -- totally my own term (!), based on my calling the lacing between the skirts, incorrectly, "hatching."  This word, which refers to shading in drafting, is a holdover from my drafting career in college.

The saddle tree has tiny rear corners, and those will fit between the upper and lower skirts. 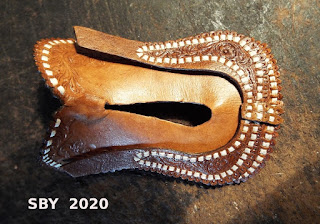 My first Clyde Goehring has only one hatch patch, with six buckstitches on it.  This second saddle has two, each with four stitches.

In other news:
I have joined NaMoPaiMo... with the personal resolve to do tons more work on this saddle first.  We shall see whether my resolve can equal the peer excitement and glorious rush of communal artistry.

Other blog posts brewing include a requiem for a car, a barn, stable blankets, a look at a 35 year old model saddle in perfect shape, Kathy Moody's workshop of old, and any number of canoe trips and Florida vacation spots.  Not to mention grist for the NaMoPaiMo mill!  Of course, what's slated next?  A weeklong trip to Tucson, returning Feb 7.