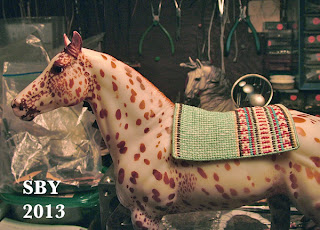 It seems to take me about 9 months to make a cross stitch blanket.  This saddle blanket was begun somewhere in late June or early July of last year, 2012... and finished just a few days ago.  I didn't think about the St Patrick's Day coincidence, but this shade of green has always been one of my favorites.  The green accounts for the word 'mint' in the name of the blanket.  Yeah, I'm one of those people who name their saddle blankets... 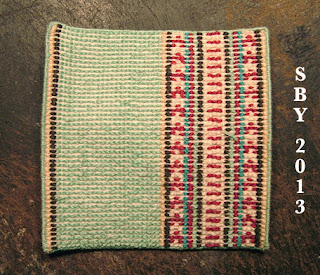 It is based on Chris Armstrong's O'odham pattern, which of course is named after the Southwest Indian tribe.  I think it's pronounced 'oh dam,' which is about what the creator says after struggling endlessly with a cross stitch blanket!  (Later:  it's pronounced "AW-thum" with very little 'h'.)  I can't quite account for why I'm spending time on a blanket when I should be working on silver, except that I had it in a kit box and could carry it with me anywhere I went.  It went to Tucson.  It went to Kansas City.  It got worked on in Philadelphia airport and in my mother-in-law's apartment.  The same cannot be said of engraving miniature silver. 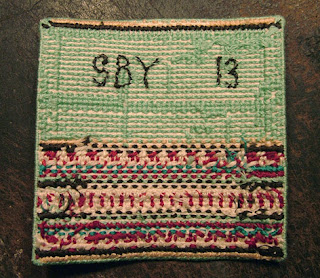 I wanted to try something different on this blanket.  Normally cross stitch is done with a cross, that is, for each square of the foundation there are two crossing strands of floss.  For this one, I chose to consider half a square to be a square.  That is, two holes in the foundation (the Aida cloth) made a square, and got covered with one pass of floss.  I wanted to make it easier.  I also wanted to create in miniature a certain texture that I thought would work well, as a saddle blanket.  I am reasonably pleased with the results. 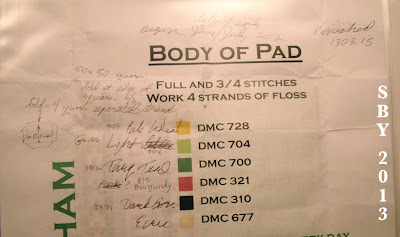 This is the paper copy of the pattern I carried around in my kit box.  You see, I changed all the colors.  Apparently I'm incapable of NOT tinkering with a project or pattern!!  The little drawing shows how I do the corners, and that I expanded the original 49-squares to 50-squares, to make the pattern come out right.  I fold over the Aida edges to make the edge of the blanket, and just stitch them right in, along with everything else.  At the finish, I whipstitch the binding on with 2/6 strand floss.  This gives a fantastic, ultra-refined look to the blanket, almost too refined to be in scale with the rest of it -- dancing on the edge of breaking this basic rule of tackmaking.  However, it's a skill, and by now I've done it on a lot of my blankets, and it's a habit I want to keep.

This blanket will probably go out with D. Feldman's saddle.  Meanwhile, I'm happily testing it on a certain red-chestnut Leopard Appaloosa.  :)

On to the Sneak Peeks! 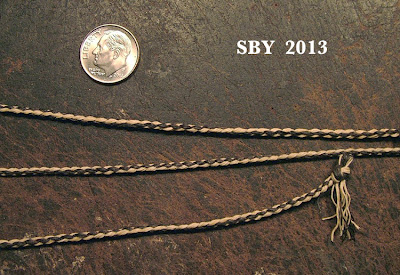 While in Kansas City, dealing with the wrenching problems of caregiving at a great distance, I started the rein bases to the Goehring set.  I am quite happy with how the textures came out.  I am slightly less happy with how twisted they appear.  Perhaps the buttons will disguise this to some extent. 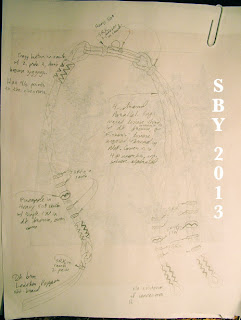 This is the "Rein Plan."  I seem to have reached a point where all special order braidwork pieces have a drawing of their own.  This one is unfinished at the moment, since I haven't done the research (assigned a formula) for the 'crazy' (zigzag) buttons.  Also, the reins should wait upon the breastcollar.  The good news is work on it is starting up again.  The bad news is most of my days are taken up with other issues.
Thanks for your patience!