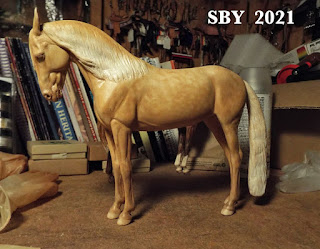 Like Brasenose, Orlik is balanced between extremes.  Starting late in the month, or early for me?  Clear vision for his color, or making do on the fly with sheer creativity?  Celebrating hope for the future, or plunging on determinedly in the old nightmare -- !!??  This horse is so similar to my beloved Teke, and yet as I work with him (nothing like NaMoPaiMo to make you familiar with a resincast), I become aware he is not a mere copy of Gazyr.  He is his own horse, made from scratch, with his own integrity and grace.

Above and below:  Layer 2.  He may look like a Palomino, but he isn't.  I'm saving his mane and tail for later. 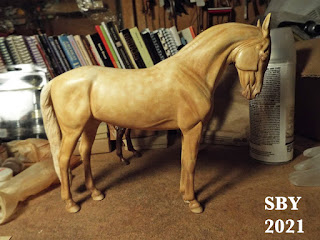 He does not have the detail that Brasenose had, neither in musculature nor finish.  Yet this can be a fine chance to display my skill -- a good painter can really make up the definition.  Let him stand then as a test of my growing abilities in a field I didn't even start until 2018. 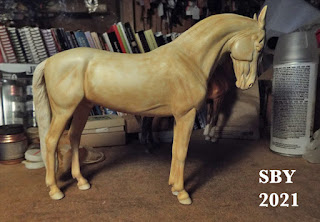 I began prepping Orlik yesterday, Friday the 12th.  By the middle of today, the 13th, I started pasteling him, and tonight (the 2-day mark) we are at Layer 2.  Historically, only Brasenose has been started this early in my NMPMs.  And yet it is very nearly the middle of the month.  Despite not flying to Tucson for the first week of Febraury, apparently I am incapable of starting any earlier... !!!

Here, one glimpse of before prepping.  Unseen:  work on tendon-defining on the insides of two legs. 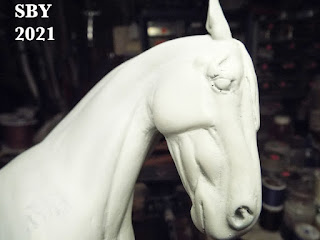 Here he is after a deal of filing, sanding, painting with Gesso and the one Primer coat. 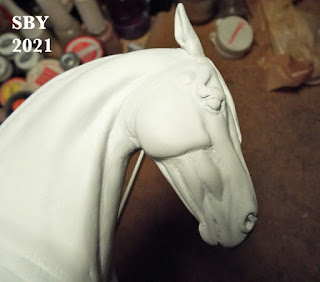 Prepping him was relatively uneventful.  He had fewer pinholes than any of my previous resins from this artist.  He only needed the one coat.  It may not look like much of a difference, but he is smoother.  The first matte spray fix-coat, on top of the primer, is a good idea.

Here are a couple of shots of the now-famous priming, in the shed at night.  I do love this stage --  so exciting! 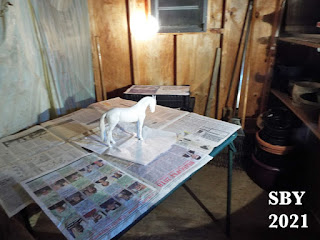 If you look closely you can see the headlines on the newspaper are in Cyrillic letters!!!  Guess who saves even newspapers from well-travelled horse boxes... 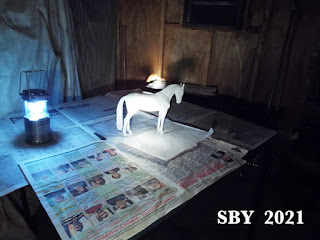 There are great challenges with this horse, not least of which is threading my way in between roaning and dappling.  Each of these features is new for me.  Pastelling itself is hardly a solid skill; I've only done this three times in the past 3 years!  Today I found myself combining my skills with a half-seen vision:  the back and loins would remain relatively white; the ribs and haunches would have Q-tipped dapples on them.  Said dapples are random spaced, hopefully not in unrealistic straight lines and hopefully not all the same size, which I find objectionable. 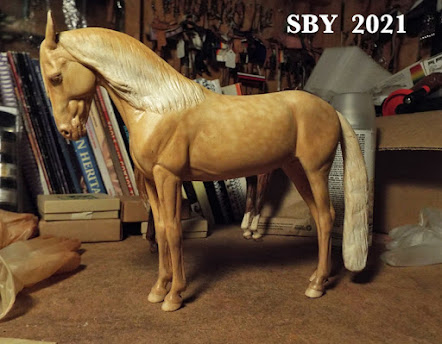 My camera's card has unexpectedly refused to yield its pictures tonight, so you won't get to see the most controversial shot.  Perhaps it's just as well.  Orlik arrived without an anus, although the rest of his stallion equipment was quite respectable.  He could eat and procreate but would be unable to digest or pass.  I created the missing part from leather (what else are they made of??) and glued it in.  Details!!  Oh, the stories that come out of NaMoPaiMo...

Because you are patient readers, here is a reward for putting up with my sense of humour.  Remember Brasenose and his computer-generated scratches?  (They really were computer-generated, by the way:  He literally fell over my Mac mini.)  Yesterday and today he got considerably closer to being mended.  At first I used alcohol-dissolved pastels; later I used direct pastelling.  I'm reasonably happy with the results. 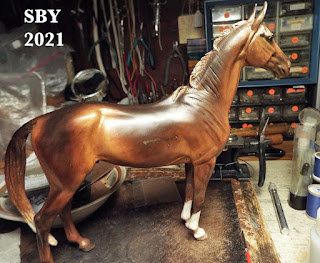 I have yet to determine the relationship between these two horses. 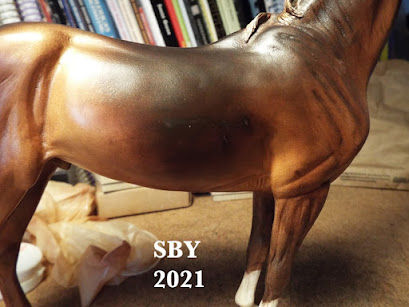 In the Orlov Trotter breed, only 20% are bay, and only 5% are chestnut.  Here I am aiming for a red roan.  Maybe they can be half brothers.