Here's the second installment looking at the 42 jigsaw puzzles worked during the Great Quarantine of 2020 (four are planned).  This particular pony mare and her adorable foal was finished April 12.  By a delightful coincidence, the name of the manufacturer is April House.  :)

In my first post on puzzles, I claimed that one-offs, limited editions and small companies were quite common in the puzzle world.  Nature's Friends is a lovely example.  This puzzle has been in my hands for a very long time, since the 70s; it was probably a birthday or Christmas present in the teen years -- no later than high school.  It belongs in the first wave of puzzles I started to collect after the 1960s Tucson Springbok rootstock (more on them later).  :)   This black mare and her chestnut foal are one of the few puzzles I own that do not state how many pieces there are, and no I'm not counting!.  :(   I would also point out that it is the only one in my collection where the box is the same size as the finished puzzle:  the manufacturer's attempt at a tray.

There is a poem on the back of the box:

I have a strong Boulder, CO feeling about this one:  memories of eating white fudge with tiny chocolate chips in it while sitting at the card table, putting it together, in the house I grew up in.  This was an isolated attempt to connect food with puzzles, which experiment (unlike eating while reading books), I am glad to report, failed.  !!!  I must have been 15 or so.  I was just deciding whether I really liked puzzles and would start a collection.  Well,...  you can tell where that went... !!

The next puzzle is also of equine extraction.  We have a date -- written on the box! -- and it also entered my life in the 70s:  1979 to be exact.  This little jewel is a birthday gift from Gretchen Lockwood, bff, who incidentally has given me more books than anyone else, quite a record.  You would think carousel puzzles would be a pushover with me, but actually there are very few out there that I like.  This one is another one-off, by a company I've never met elsewhere: Apple Street.

The horse pictured is an early PTC from Magic Mountain carousel in California.

The next two puzzles form a pair.

I am pretty sure we got them both from a mail-order catalog, Bits and Pieces.  This dates them to the late 90s and  2000s up to the recession of 2008, when Bits and Pieces gave us some of our finest puzzles.  Like all Schmidts they are thin and feature plain cuts (read: more cheaply made than Ravensburgers or Springboks); but the sheer beauty of them is very satisfying.  The box backs tell the names of the featured animals and plants.  They are the sort of product you'd find in a Nature Center gift store, and being who we are -- canoeists, hikers and birdwatchers -- this educational bent is very familiar to us, a comfortable home for the soul.

The full title is "The North American Prairie:  A Vanishing Landscape."  In particular I loved the shaded greens of the hills.  I prefer a drawing to a photograph for puzzles, and this is one reason why.

This next puzzle will make all my cat-loving friends mob my collection when I die.  :)  It is my favorite Springbok one-grander.  I must have got it in my college years:  I have a memory of a Front Range Hallmark store for this one.  That puts it 1978-1982 in Colorado, another of the first wave of puzzles collected.  I was living in Fort Collins.  After 1982 to 1988 I was busy being a starving artist.  Such luxuries as Springboks must have been carefully selected and budgeted.

It is one of the most joyous puzzles I own.  Here is the one, very private, corner of my life where I can honestly and truly say I love cats.  All the breeds shown are identified on the back.  One favorite is the Himalayan Flame-Point (upper left).

I like to alternate photographs with drawings, so the next one had to be a photo.  This particular picture is rather famous -- I've seen it in other places.  It makes for a cold, long, tough puzzle.  It took us twelve days to finish.
The full name is "The Sunken Garden at Marjorie McNeely Conservatory in Como Park, St Paul, Minnesota."  You can't see them but there are 2 people sitting on benches in the back center.   The last parts to be finished (always the hardest of any puzzle), were the lower pink flowers.

Puzzle number 18 is a nice example of Chris Cummings' artistry (and not my only one of hers).  Begun around May 12, it was finished by the 20th.  The company, Cobble Hill, is based in Canada. Every one of my Cobble Hill puzzles was bought in the Amish stores of Peight's or Weaver's in the next valley over, in the last 15 years or so.  Yes, beautiful puzzles are alive and well; you just have to know where to look for them.

Proving equines are irresistible, here's a perennial puzzle favorite, one of only two 500-piece Ravensburgers I own:

This next puzzle was made by SunsOut, a company parallel to Cobble Hill but made in America.  SunsOuts are also found only locally through the Amish and Mennonite stores of Central PA (that I know of).  Geo picked this one out, being more of a bird watcher than myself.  This puzzle is very new, being bought in the fall of 2019.

The twentieth puzzle we worked during 2020 is one of the standouts in the collection, bidding fair to be my favorite.  It is unique.  I've tried hard to find others like it (a similar series), but they are few.  This really is a magnificent example of the breed, proving (again) why Ravensburgers are the masters in the field.  Even they call this metallic foil puzzle something special:  it is listed as a Collection Exclusive. I don't quite recall where we got this.  It may have been through Bits and Pieces.  I also don't recall whether it was as expensive as it looks.  It is a stunning puzzle in every way.  Photos can't capture the subtlety of the metallicism.  The picture is holographic.

I've had this for a good many years.  It must date to the early to mid 2000s.  It's just barely begun to be affected by mold.  Believe me I'm defending it tooth and claw now!

Walking around it when the sun is shining on it is the only way to appreciate all the gold and lapis lazuli.  It is an amazing work of art... and the story behind the King's discovery is even moreso.  This blog doesn't have scope to cover that, but it's well worth looking up.  Finish-photo'd June 8, 2020 (which just means it was finished before that date by one to three days).

I'm including this last photo for the situational-awareness.  Note the pillowcase.  It's an early version of the now-much-larger cloth cover used to protect the puzzle during the day.  Because, you see, both of  us ... cheat ... cheating being defined as working on the puzzle any time other than after 8:30 at night.  "The light is just better!" 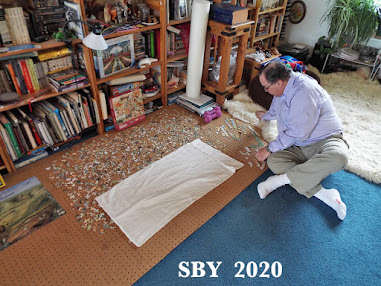 Three puzzles are visible;  the third is the Sunken Gardens box, on the shelf, above the Cats box.