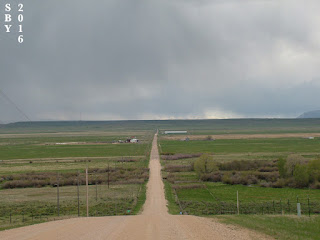 Back in May I had the tremendous pleasure of birding the Laramie Basin in Wyoming for 3 days.  While I never did get my target species (Chestnut-collared Longspur), I did get lots of McCown's Longspurs -- like, LOTS!! -- and they're supposed to be the rarer and harder to get.  Go figure.  In this picture (above) we're looking down into part of the Basin west of Laramie, WY.  Along the base of the low ridge at the far horizon is one of the places I got the McCown's.  They came out on the shoulders of the road, and if you drove past they'd swarm up and away like grasshoppers.
I didn't manage to get any pictures of these birds myself, but here's a glimpse:

Longspurs like short grass.  For all that the Wyoming prairie seems to be endlessly the same, it isn't.  I was constantly surprised at the variety of habitats.  Every field is different.  Wet sedge fields were good for Snipe and (rarer) Cinnamon Teal.  We got a fair number of Ferruginous Hawks, once a pair thermalling against a white cloud.  Once in the distance we picked up a pair of young Sandhill Cranes... the only Sandhills of our entire trip!  And once we got an immature Bald Eagle, right over my head.  That was near Hutton Lake.

More views of the Basin: 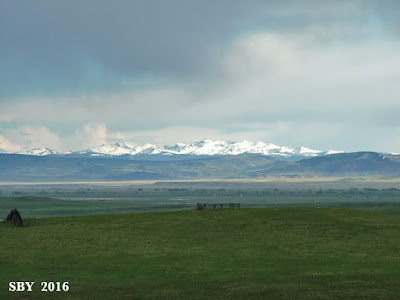 This is a distant view of the Mummy Range (above). 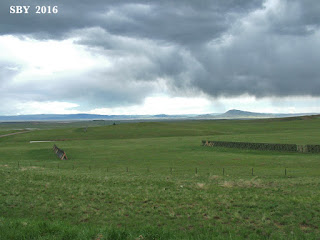 The lushness of the prairie was another constant surrpise.  It had been a strangely warm winter, with spring arriving very late -- and then it turned cold!!  So everything was a few weeks behind.  Instead of babies, we were seeing courtship behaviour and nesting.  The Pronghorns were rotund; they hadn't popped yet...

Life is never dull with a meteorologist in the family.  See the water puddled in the low part of the road, and the whitish residue near the fence, near the center of the picture? 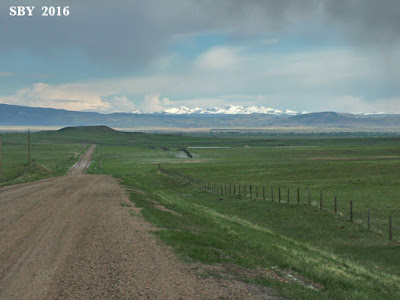 Guess what that white stuff is!! 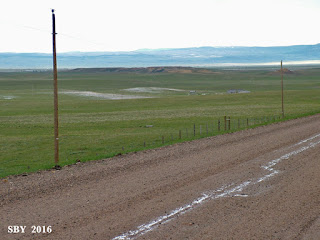 "Best Birding Day Ever!
"It began with a McGillivray's Warbler and ended with a Common Merg.  In between we had 71 birds:  Bald Eagle, Broad-Tailed Hummingbird, Phalaropes, Canvasbacks, 1 Snipe "head-on", a Yellow-Rumped, several Cinnamon Teal, dozens of McCown's Longspurs -- and to top it off, the catch of the year, rara avis White Ibis, two thousand miles out of range and a thousand feet up, thermalling against storm clouds at dusk with 30 other Ibis -- of the White-Faced variety.  Which meant they were black, as black as Glossies.  They came spiralling out of the far skies from the E S East, circled ever closer until they were right over our heads, and then faded off into the distance, in the same direction.  I ran out with the camera and got 7 pictures but alas, the single white flake bird amongst all those black flakes was not caught.  : (  He (or she) was too far off to one side at the time."

In my memory the whiteness stood out.  At first I thought it was a Snow Goose.  The closer they came, the more I thought "geese or ducks."  When they were overhead, I realized they were Ibis, a somewhat common bird of wet meadows and irrigated pastures.  But western Ibis are dark, glossy black all over except for a narrow white rim around the face.  White Ibis occur in Florida and along coastal Lousiana and Texas...

Have you ever taken shots of something you were sure you missed, but later looked more closely and discovered you'd gotten it after all?  It's a delayed thrill, but a thrill none the less.  The location of our rare bird sighting was Hattie Lake.
Imagine me dashing out into the cold grey wind and frantically aiming upward as the flock drifts overhead: 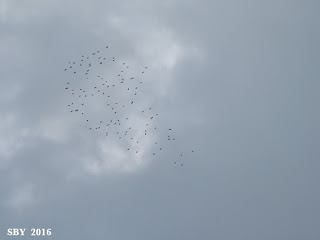 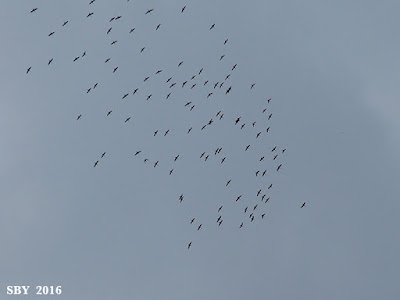 I had little appreciation for the physics of the situation.  Against the sky, every bird came out black.  To find the white one in these shots took some imagination.  You had to know that White Ibis are larger by a couple of inches, and that they have black wingtips.

Below is an enlargement of the top center portion of the above shot.

A bit of enlargement and lightening works wonders, but it's still a task for a serious birder. 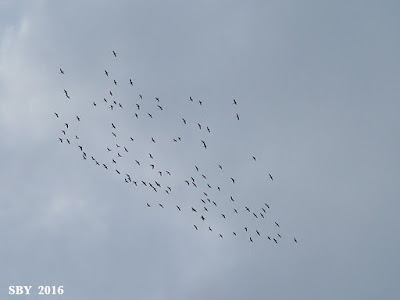 For some reason, he (or she) stayed near the edge of the flock.  By the end of their 'visit,' the White was drifting seriously away from the flock.  An enlargement of the upper left above shot: 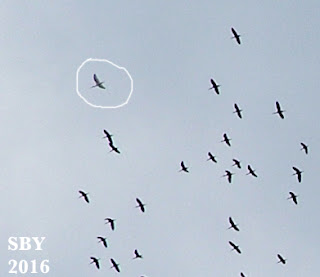 Two of my 7 shots showed the White in such a fashion that I could actually say "that's it."   In a couple of other shots, a deal more of imagination might possibly show him/her.  This is the best one... 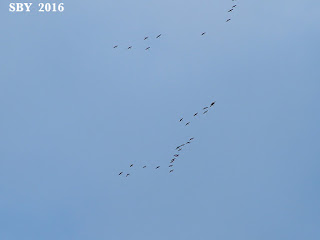 ...look in the lower center.  Although I can pick out black tips and the size is clearly larger, there is just no telling for sure!!  particularly when I recall he/she truly was at the edge of the flock by then. 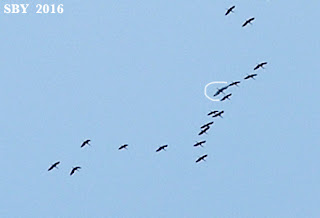 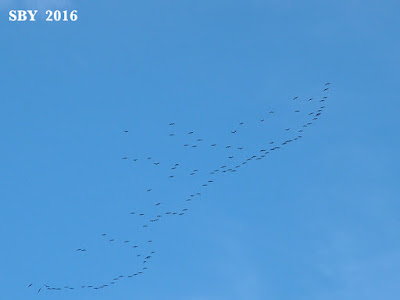 I look forward to returning next year.
Maybe then I can get a Chestnut-collared.