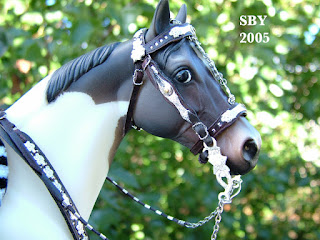 I know, it's been more than 9 weeks since my last blog post.  April went to the Guide (I haven't worked that hard in years), and May and June have gone to our annual trip to Colorado, a combination of birdwatching vacation, visiting relatives in MO and KS and work in Boulder.  Since I went to the Sedalia Ragtime Festival in MO for 5 days (June 1-5), it's probably going to be 10 weeks!
So what did I choose to write about, when I finally sat down?  You'd think the Guide would be a natural topic, but in fact I wanted a break from that very intense submersion.  All of the subjects I could blog about -- restored saddles, rivers in Florida, a visit with Kathy Moody!, my Carol Howard tack collection, the TSII logo -- seemed too large, too complex to take on (at the moment).  Pawing through the files, I found a ready-made cache:  a photo session taken all the way back in September 2005, eleven years ago, of a beautiful saddle and in a very special place.  Prior to leaving for Colorado, I uploaded all the pix, so I could work on it later -- hurray for draft posts! 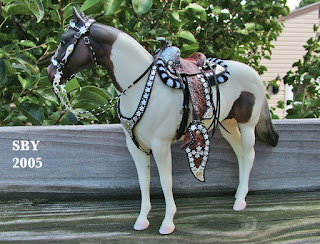 This is TSII #442, built for Colette Robertson -- long one of my best customers.  The tooling pattern was taken from a page in the family copy of the Anglo-Saxon Chronicles.  It showed a twining grape vine, which I then adapted and customized. 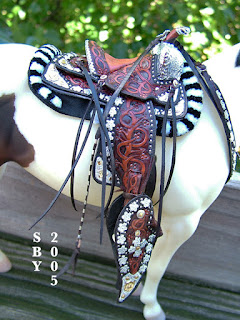 This saddle is 4 years and 20 saddles after my first great formed-spot set, #422, Partee's Cottam (built in 2001).  It incorporates the same technology of spots made of Aluminum sheeting, cut with prongs and set by clinching.  Four other TSII Parade sets used this technique before the Medieval Vine: # 431, 439, 440 and #441.  The gold corner motifs were first seen in #441, and that successful idea is expanded on here.

What made this shooting session special was the venue.  Away up in the Quehanna Wilderness Area, set aside originally as a nuclear buffer (!) but today a state forest, there is a wildlife watching platform off Wykoff Road intersection.  It had opened not long ago and we had seen it in passing but never visited.  Now we had the perfect excuse to check itout. 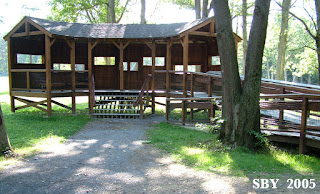 I really wanted a barn-like background for these pix, but didn't have access to a real barn.  The openness of the platform would give a unique lighting, while the wooden beams would give a beautiful warm tone to everything.  The cleanliness of the place was perfect for models. 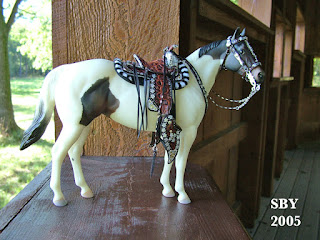 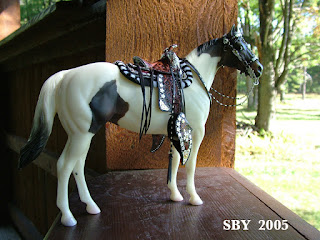 Losing your head (and tail!) against a dark background? 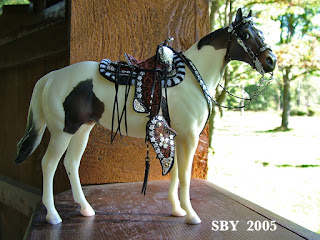 Overexposing?  Sun and shadow!  The problems of shooting such high contrast subjects were only partly solved by repositioning. 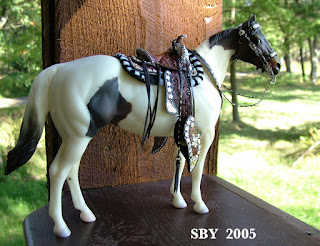 Full sun.  I loved how the colors worked.  Walnut and apple green... 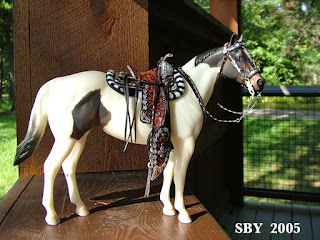 This horse is a test.  She (yes, it's a she) was my first and still my only Stone factory test.  I've been told she's a Sparrow test.  Since these pix were taken, she has been glossed.  I named her Khaiphana. 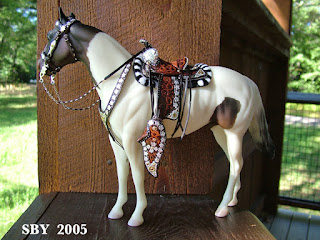 Birds eye view shows the detail on this saddle.  I indulged in an interlocking pattern for the seat jockeys. The little sprays off the grapevine, ending in grapes (I think I used the cloverleaf stamp) were perfect for the traditional three-strand braid, here seen along the cantle top. 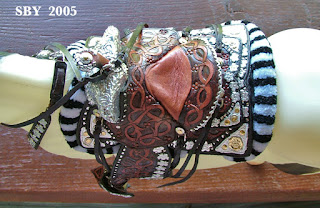 The bridle sports a homemade solid sterling silver (or possibly Argentium; my notes are out of reach at the moment) bit.  The cheek and brow plates were likewise homebuilt but out of aluminum.  The only part on this bridle that wasn't scratchmade is the browband concho.  Somehow I had come into a pack of these solid silver bar-back conchos.  They were heavy and thick, but they didn't tarnish.  It's always so much easier to use premade parts - !!  yet the ideal piece of tack, to me, would have both premade and scratchbuilt hardware. 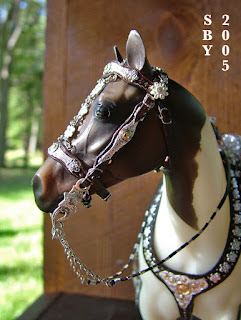 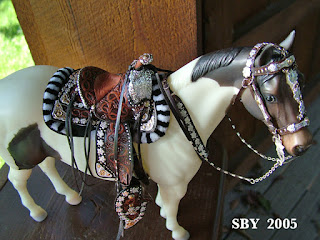 (Above) The saddle blanket is by Melody Snow/Unicorn Woman.  This was before she released her book on how to make them. 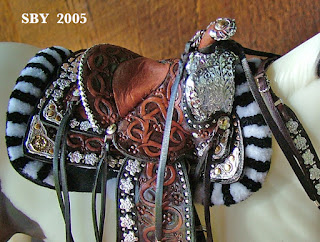 A close up.  The saddle strings were hung on tiny dees (Rio Rondo product) which were hung on pinned lace under some kind of concho.  Again, I'm not completely sure whether the conchos were Rio Rondos.  They look like they are.
I'm not sure if this was the final blanket; obviously, there is a gap for the serape which this saddle does not have.  One often has to make do with what one has.  This blanket was so much better in quality than anything else I had on hand that I must've chosen to go ahead with the shoot. 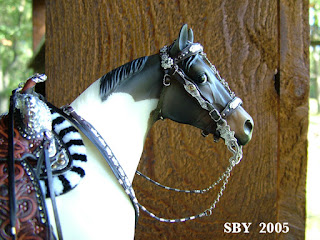 I liked this shot because it showed the horse's personality.  The big soulful eye... 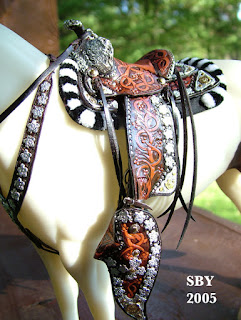 Apologies for slightly out of focus.  I presume this saddle is still in Colette's hands, as I do not remember hearing otherwise.

Other news:  As mentioned, hopefully soon (a couple of weeks) more regular (as in, 1 or 2 weeks between) posts will resume!  I have lots of subjects but not lots of time.  Much adventure has been had, and great good has come of it, but the end of our long trip is in sight.  I will try to keep the TSII FaceBook more or less up to date.  Sneak hint:  A pair of auction reins is in the making!
Posted by timaru star ii at 3:51:00 PM