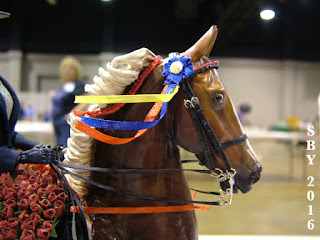 I brought home 1483 pictures from NAN.  The question becomes not which ones to share, but which ones of which part of which categories of my style of shooting to share first?!  That 1483 number is not counting the deletes, OR the ones taken as official photographer of the champions and reserves.  Today's short answer is "close-up portraits of horses and model people."

For several years now I have known my shooting style was developing (o pun) into something individual.  Wanting to document an entire show, I learned to capture whole tables at a time by shooting diagonally across the ring.  Then I'd zoom in on individual horses in that class that caught my eye.  Sometimes I'd further zoom in on their faces, for a portrait.  It's amazing to discover I often selected the winner many minutes before the judge did. 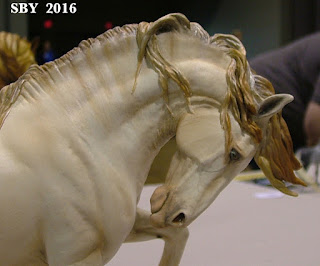 I would get 'atmosphere' shots, views of the setting.  I would get tack shots, close up, of pieces that grabbed my eye, for myself of course.  I wanted to get people shots, but that turns out to be extremely difficult.  Later I hope to share some of my successes along these lines.  For today, I first organized my 1483 chronologically:  seven hundred + shots on Tuesday, four hundred+ on Wednesday and 373 on Thursday (I guess I was running out of steam).  Then, quickly viewing, I evolved categories:  hall shots, prize shots (the championship table), portraits (close ups of individual models), people (76+), tack details, and 4 miscellaneous categories, which for this show turned out to be Horse with the Golden Saddle, Circus for Lynn, the Pintaloosa Foal I fell in love with, and the Marwari Costume.  If time permits, I'll share these too.

But back to the faces.  It's the easiest thing in the world to snap the shutter on a model horse at NAN.  Most of my shots are tables or parts of tables or groups of models or individual models.  It's a little harder to get right up close to their faces and really focus in on who they are.  Out of my nearly-fifteen-hundred shots, only about 30+ are portraits... ... about two percent.
I loved these two harness portraits because of their eyes.  I don't really know who the owners are; info welcome. 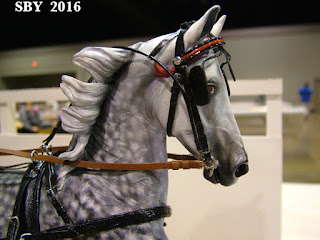 At first I pulled the OFs.  The mythical bay Alborozo is in the building! 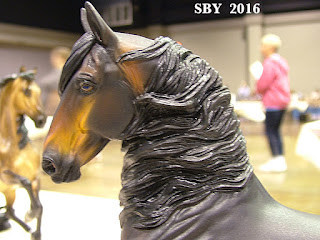 I do love the chinas.  I'm sure my love of glossies is influenced by them. 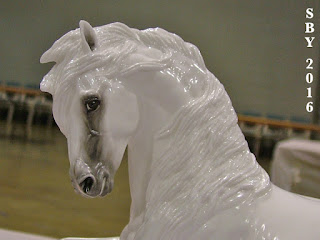 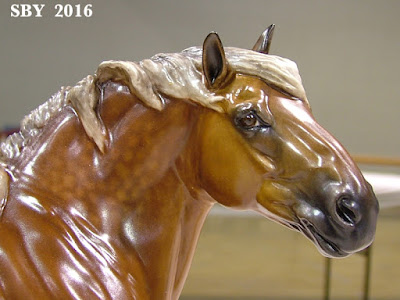 Here's one that won after I shot him.  This must be a Mink. 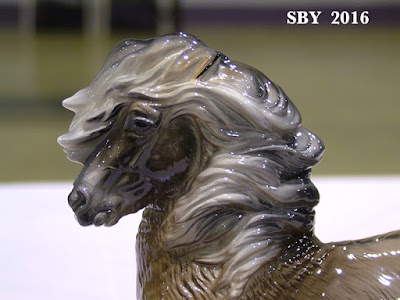 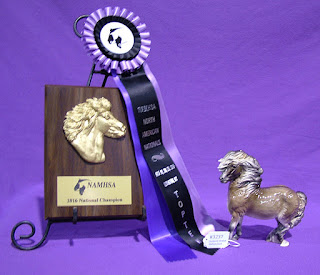 Some of these chinas are perfect beyond belief.  I can't quite explain going quite so snap-happy around them, except that I've never been allowed to collect chinas myself, on the grounds that I would certainly break them.  Now that I'm old enough not to break them, my house is not exactly safe for them, and high-dollar models make both me and my husband nervous.  I do have four chinas, yet one of them broke an ear already.  The subject will have to be addressed some day.  Meanwhile I blaze away. 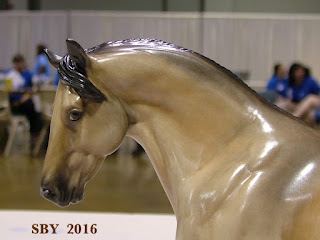 Speaking of perfect, something happened when I spotted The Horse With the Golden Saddle.  I could hardly believe what I saw seeing.  Several other photographers did the same thing, bowing and fawning and staring and shooting away (is this paparazzi?!) so I know I'm not alone.  Owned by Colette Robertson. 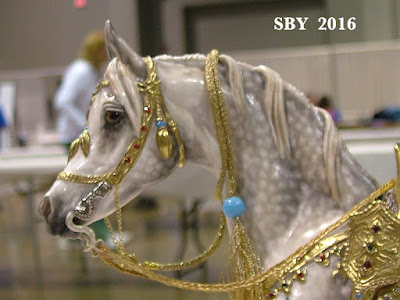 Yet there were horses in the hall that moved me even more, in a way I did not expect.  I am old enough to remember when this remarkable work of art was news:  It's Lu Heater's Acoma!  I never thought I'd see him in person... 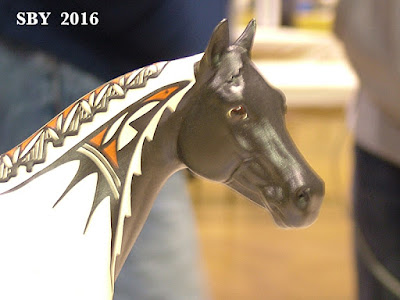 This horse led me to choose, somewhat naturally, this fellow's portrait: 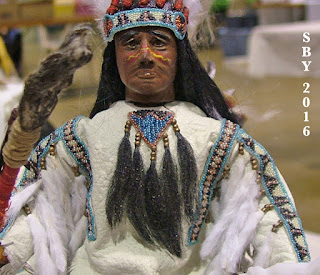 The beadwork alone is astonishing.  Add in the horsehair tassels and the feathers (ermines? they look like feathers to me!).  But it's his expression that speaks the most.  From here on, I would choose those human portraits I could actually shoot, without impingeing too much on someone's privacy, or struggling to catch them standing still (which is really hard with the living kind)...
I had rarely focussed on their faces before.
This costume, which almost defies belief, was made by Cary Nelson.  I could do a whole post on it alone.  I am pleased to report it did win Champion. 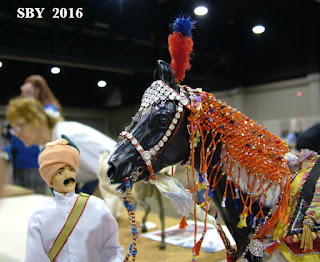 How about this face??  We are all so familiar with this horse, known today as the Classic Arabian Family Stallion.  But I almost never have gotten to see this face... 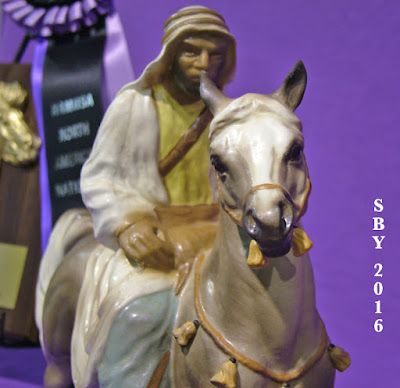 It seems appropriate to wind down with this fellow.  Memories of the song 'Minstrel Boy' ring through my head (Roosevelt used it as his theme song), not to mention Night at the Smithsonian (movies featuring him), when I see him. 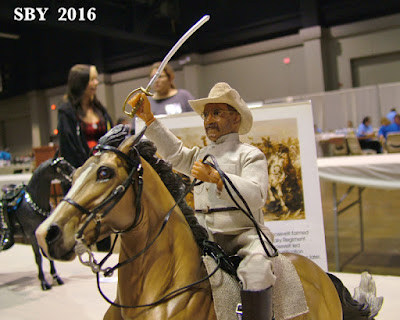 It's such a good likeness.  Dang! -- almost reminds me of Indiana Jones... 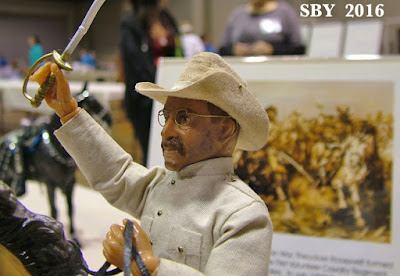 The true last word of this post, I believe, should go to this young lady.  Thank you people. 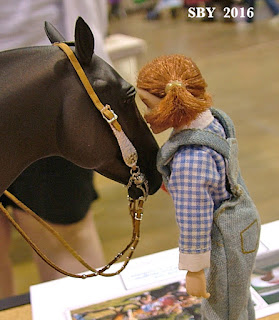