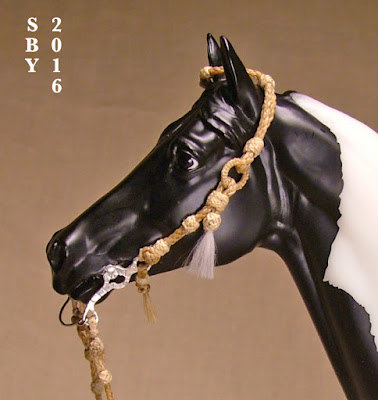 My pair of Round Button Braided Reins has turned into a Bridle!
It will be up for auction at BreyerFest. 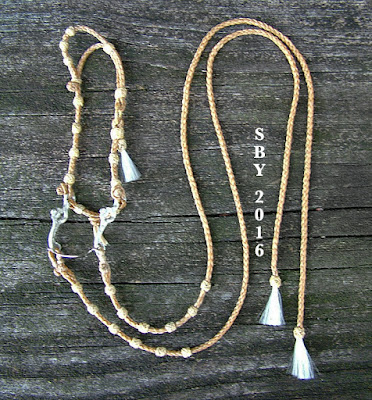 This Split Rein One Ear Curb was inspired by a headstall I made ten years ago for Candy Evans.  I'd always wanted to try it again.  The idea for an adjustable rawhide one ear came originally from Tom Hall's books (Western Tack Tips and More Western Tack Tips). 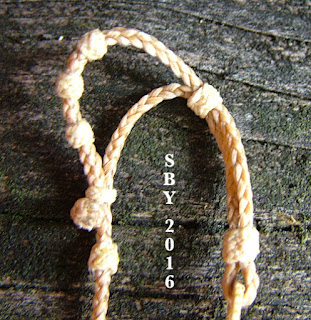 These buttons do actually slide, so the ear and crown are adjustable.
Here it is on my Travis 'Pantanal': 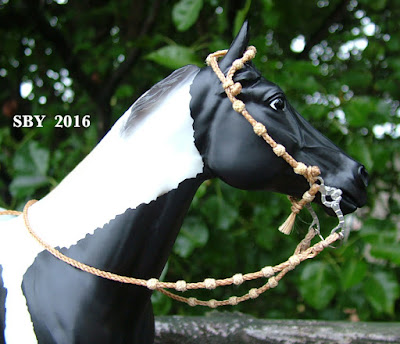 The curbstrap features a sinew tassel, something I've rarely done.  This idea originally came from Regine Nikolaidis of Germany. 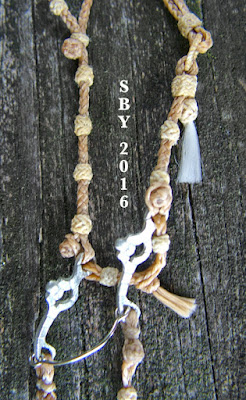 The round buttons are all Fan types, 7B 9P 1-3-3-1.  This is a button I evolved on my own, from either Hall or Grant -- my notes don't say which!  They can come out beautifully, with the passes lined up to form deep Vs in the middle... or they can fight me and come out lumpy, with the cores showing, which happens about half the time.  The pattern is under-3 over-3 in the middle, with a single under or over on each side, hence the 1-3-3-1.  As ever with the Timaru Star II, these buttons are braided and then tightened just like the full size ones, by hand, with a needle and thread.  I use custom-dyed cotton and miniature rawhide (artificial sinew) for my model rawhide tack.

The braided connectors on this bridle, between rein and bit, are the main new feature of this bridle.  When I did research on the full size connectors,  I got a shock.  Instead of the shape I had always made them in, a sqaushed-circle rather like a snaphook:
I saw some delicious figure-8 shapes, like the Infinity symbol, which immediately made so much more sense!
Rein connectors are like curb straps: they're two of the smallest parts of a braided bridle.  And that makes them supremely frustrating for those of us who work mainly in Trad scale.  How to get that teeny??  I knew about split sinew and smaller gauges of thread.  I dug up smaller buttons in my repertoire.  That didn't make it easy, but it did let me proceed.  (This next shot, by the way, shows a 'beautiful' round button to the right of a 'lumpy' example, both on the lower rein.) 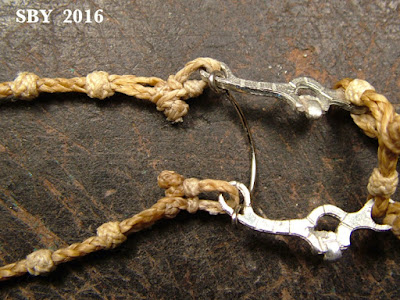 This bridle has my first-ever figure-8 rawhide braided rein connectors.
Closed up tight, they don't look like much!  Here's a view with the connector loosened up and detached.  You can see how the end knot passes through the two sides of the loop. 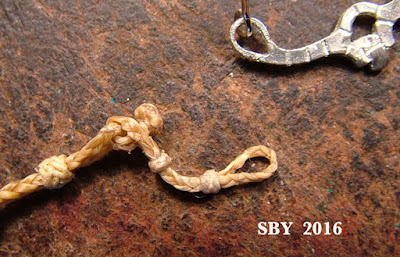 It takes pliers plus fingernails to open and shut this.  Here's me putting the connector back on the bit.  Both these little tiny buttons slide, as is necessary to open and close such a device. 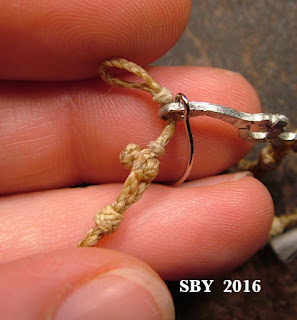 In full scale, there is often a covering button over the end knot.  In model, I decided that was too much to ask, and stayed with my typical "Triple Crown," which is really the sinew tied with a couple of Undercrowns, an Overcrown, and a Wall pass.

This picture is a bit unusual in that it was taken very dark.  Hooray for PhotoShop which lightened it up -- and thus we have about the only picture in here that isn't overexposed!!  As a result you can see the braiding on the buttons a little better. 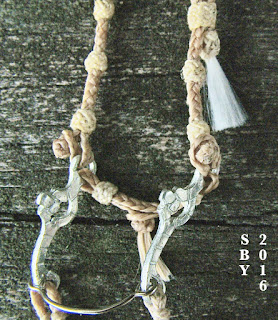 I am thinking of possibly making a new Bit for this bridle.  The bits are removable via the Button-and-Loop fastenings at the ends of the cheekstraps.  The curb, at least in theory! is removable too.  Guess I'll deal with that when I get there... 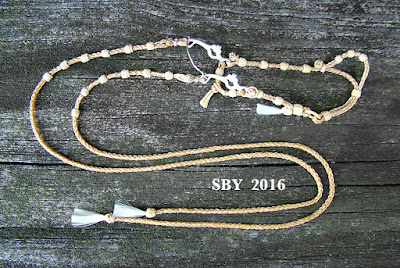 There will be a Bid sheet in my room at BreyerFest, and I will be taking bids for this Bridle.  Horse not included, Heh!  Closing should be around 10pm Saturday night if all goes well.  My room is 610 at the CHIN.
See you there!