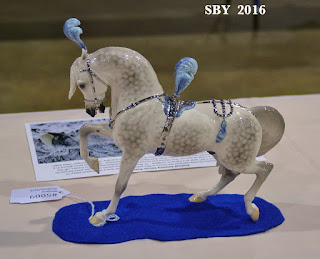 A friend has sharpened my eye for the model circus pony.  To the few ponies I shot at NAN, I'd like to add the amazing Horse with the Golden Saddle.  These two subjects have something in common: they have metallic painted tack, extensive decoration and a china bone structure.  They're supreme examples of equus fragilis.  Between them I had just the right number of photos to process and write up.  In other words,  I love 'em.

(When I say 'china bone' I am revealing my unacquainted state with porcelain. I'm not a chinahead.  But I can sometimes pun.)

With reference to the excellent blog post on her own circus pony collection (horsiemama.blogspot.com)
I have become aware of the few but fantastic model circus ponies out there.  For some reason this category, so small yet so distinct, has caught my fancy.  It's one way to control the firehose of images... and, uniquely, it is linked with this friend.  When I saw these, I had to grab them: 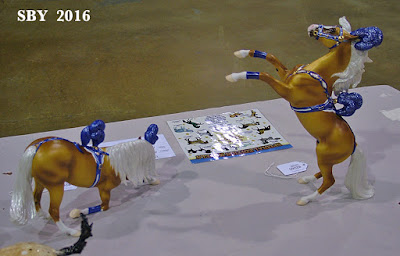 This deserves a close up. 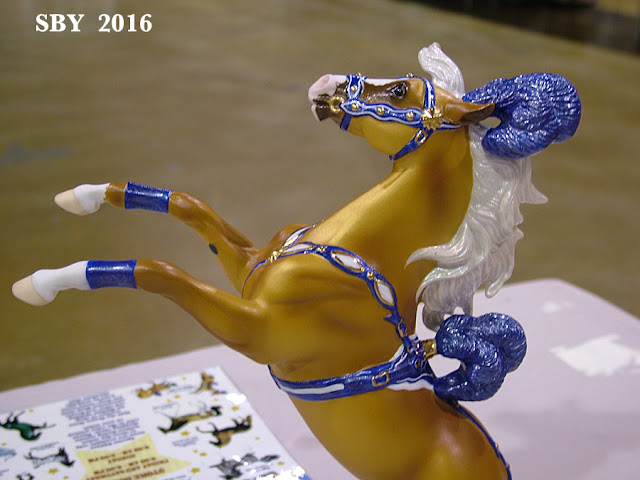 Later, strolling around the showers' tables at NAN (an inimitable pleasure) I came upon them again, and decided to shoot 'as was,' in a condition of, shall we say, 'found' orientation.  I didn't have all that much time, and I wasn't about to touch them.  I'm sorry I don't recall the owner. 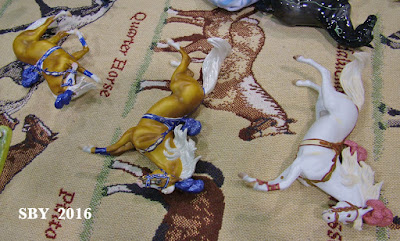 Curiously, I did try rotating these pictures so the horses were right side up.  But it did not work on the above shot.  They appeared to be falling off the blanket.  Something about the lighting insists they be shown as I saw them.
As for the two rearing ones, well, see for yourself.  Here they are as I shot them: 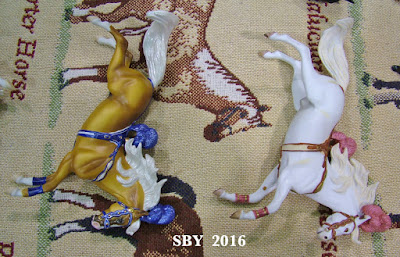 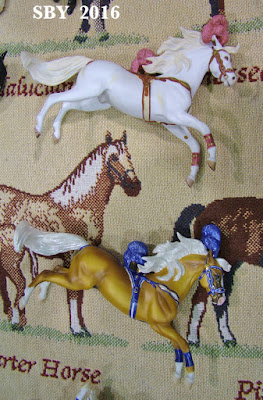 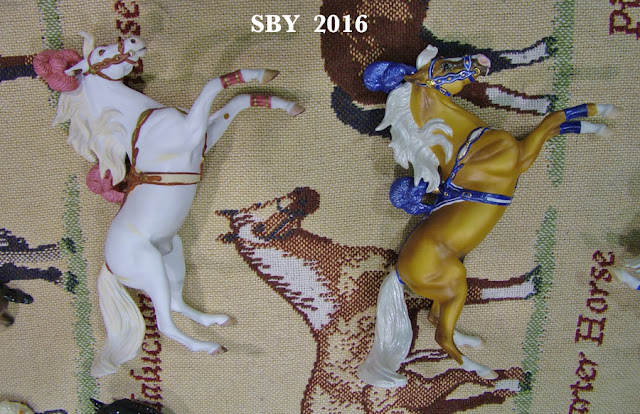 Still getting a bit of stretching distortion on the palomino's forelegs, but it's acceptable.

Seeing the two colorways side-by-side is revealing.  I love the pearlescent mane and tail on the blue.  The cinch is different, not just in color but in arrangement.  And I would have missed the gold bands on the red's forelegs... metallic detail which is missing on the blue palomino.

I have only one other shot of the blue-decked Donna Chaney dapple-grey circus pony, but it is a perfect transition to my next subject. 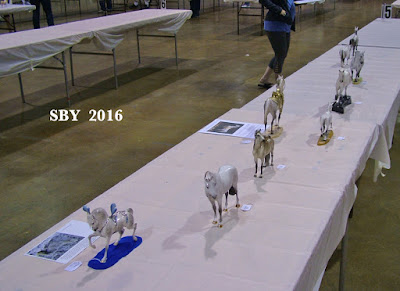 I have looked up this class.  At first I thought it was a UK-made china class, but it's a custom glaze workmanship color class:  greys.
I had known about the Horse with the Golden Saddle through Liz Bouras.  The owner of this iconic and stupendous piece is Colette Robertson.  I never thought I would see one in person.
My first glimpses: 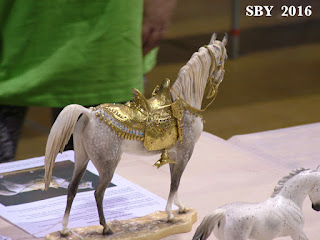 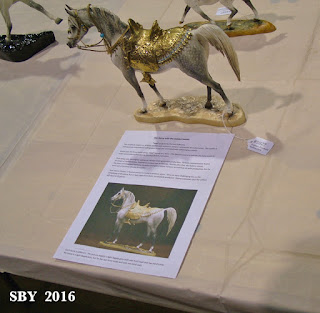 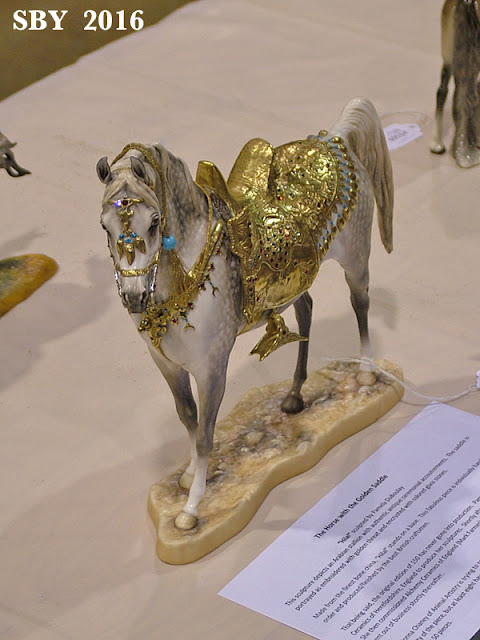 I think I can safely say 'there are no words!' 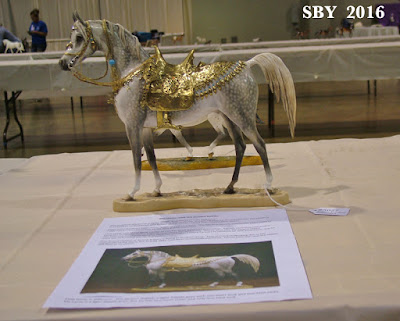 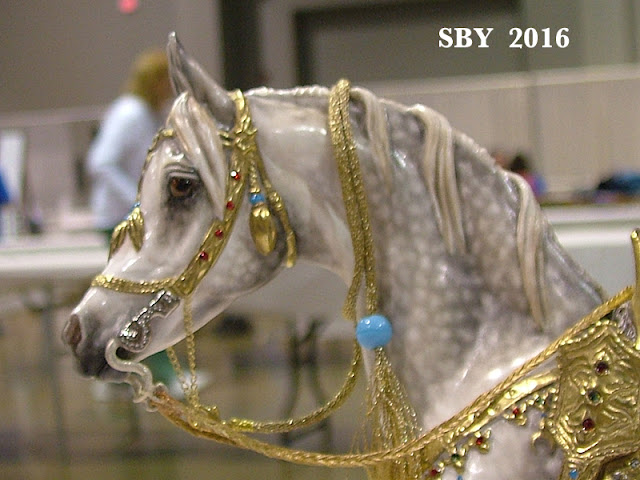 This is about as close to Pegasus' golden bridle as I've seen in the hobby.
Kneeling is obviously the thing to do: 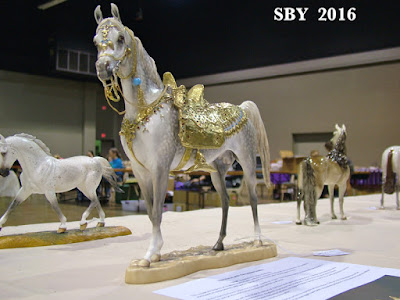 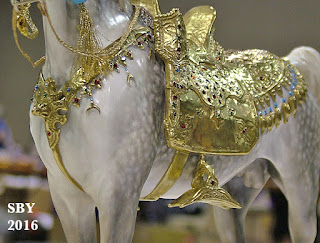 No amount of detail is too much for such a king.

1608.16  The owner has given me permission to include most of the text on the page next to this horse, so I'm adding it in later:
"The Horse With the Golden Saddle
"Hilal" sculpted by Pamela DuBoulay

This sculpture depicts an Arabian stallion with authentic antique ceremonial accoutrements.  The saddle is portrayed as embroidered with golden thread and encrusted with colored glass stones.

Made from the finest bone china, "Hilal" stands on a base.  This fabulous piece is inidividually hand made to order and produced and finished by the best British craftsmen.

That being said, the original edition of 150 has never gone into production.  Pamela comissioned A Avalon Ceramics of Herefordshire, England, to produce her sculptures.  Shortly after this the factory closed.  She then commissioned Alchemy Ceramics of England (Mark Farmer) to continue on with the production, but he went out of business shortly thereafter.

Now Donna Chaney of Animal Artistry is trying to produce these.  They are very challenging due to the complexity of the piece, but at least eight have been successfully produced.  Donna estimates that the edition will close at 50 pieces."

I think I have viewed the highest of the high.

This may be a ridiculous shot and not best flattering!  But it does capture the attitude of some of us to these horses.  With apologies to Sue Rowe. 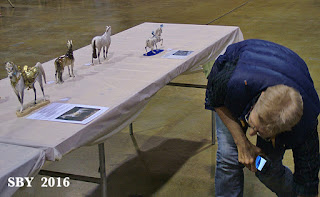 Next up:  probably tack!