Orlik, By a Nose 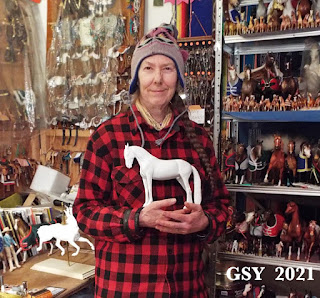 My NaMoPaiMo decision is still ongoing.  I have 4 pieces of tack to get through before I can pursue NMPM with a clean and free conscience.  I also have about sixty Christmas letters -- !!  Talk about too much to do...  And she thinks she can paint two horses in a month?!?  Methinks it will be a miracle if I get even one started.

I thought you might like to see the galley proofs of the latest Nudie Selfie photo shoot.  By now this pattern is nicely settled in:  This will be my fourth National Model Painting Month.  As is traditional, my husband takes my Nudie Selfies.  Also traditional, I'm standing in the TSII tack shop and pony room, a delightful place (if I say so).  What is Not traditional is the hat.  It's cold out there!!  Fear not, when it's warm again the Tilley will reappear... * 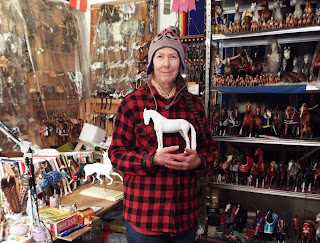 Above: uncropped.  Below, a different shot.  In this case,  Ziggy the carousel horse (behind my right elbow) is less visible. 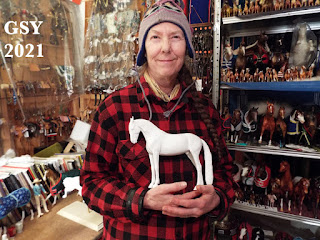 To round out the Orlik shots, here is a different perspective of the room.  This is the corner just to the right of the above shot:  The horsiest corner, where the two longest walls of shelves meet. 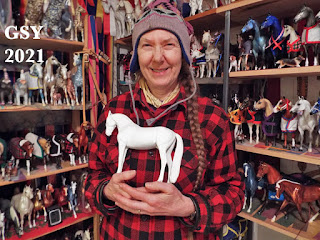 Because he's a bit more attainable, a little more do-able.  He's not a leap off the cliff into something I've never done.  Believe it or not, I'm still healing right now, spiritually if not physically.  I'm recovering from an awful year -- one whose terrors are not over for us, nor likely to be for a while.  Yes, I said I was ready for diversity.  Both dapples and roan will be new for me, although I'm not at all planning on a hair by hair...  :)  Orlik chose his color when I fell in love with this photo. 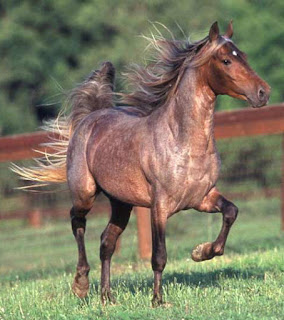 Another reason for choosing Orlik is the faint, although quite real, vision of a Troika.  I already have two similar horses finished, one with the neck turned --!!  I have long wanted to get back into harness... a 'failing' made apparent by my accepting a harness order...

Ziggy Stardust has not chosen his color to such a detailed depth yet, so that's why it's Orlik by a nose.  But this decision is not cast in stone:  Ziggy is not far behind.  He's closing in, on both a color and a name (gold-point Siamese)(Coney), and I was so comfortable with the idea of painting him that he got some Selfie Nudies too. 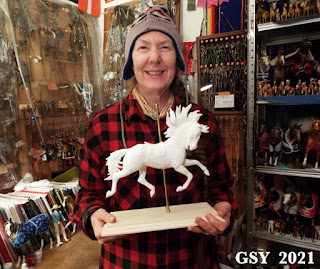 The smile is real. 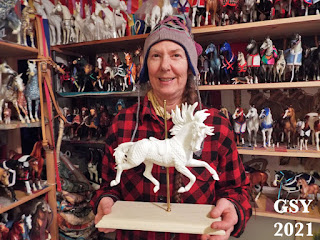 I have not yet signed up for NaMoPaiMo.  But it's only a matter of time.  I thank in advance the tack customers and the letter-readers:  I appreciate your understanding.

* I name my hats.  The silver-and-rawhide Tilley broadbrim is named Coondoondah the 11th (this is an Australian aboriginal word meaning "hat").  The blue-and-purple tassel hat was called an Inca hat and this has rendered down in the family to "Inkerhat."