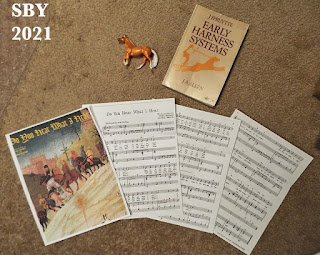 Two intensely personal gifts came home to me today.  Both were from women I admire greatly:  One is a dear friend who is my same age -- and the other is my own beloved mother.  Both gifts have been lost in the mail for much too long... and one of them has been lost for decades!  Mom's envelope of music (AZ) was postmarked December 17 --  my god, exactly a month ago -- while the box with the book in it (VA) was shipped December 21.  Since when does a package take 28 days to travel from VA to PA??  Yeah, they have 2 states in between them -- but it's WV and Maryland at their narrowest....

...while an envelope from Tucson to State College PA usually takes a week.

Part of the explanation is Christmas,... but there's so much more.  I admit, 4 days were added on to each mailpiece by our house decontamination procedures.  Even so, it does not take a rocket scientist to deduce that these items were dangerously close to being lost in the mail.  One of them, sheet music copies, was on the brink of being replaced; in this case, it would've been relatively easy to do again.  Mom is always sending me music.  She is my best source and she's been doing it ever since college.  Sheet music is replaceable, although my Mom's touch is so precious to me... especially now that she's become so frail.

But the book turned out to be dang-near irreplaceable. 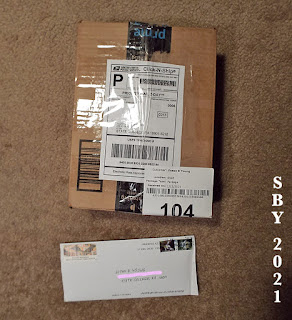 It is a matter of debate when I lent that book to Eleanor.  The publish date is 1983.  I acquired it somewhere around 1989.  We tried to work out the lend date and came up with the late 1990s, somewhere between 1996 and 2002.  I remembered lending it but she did not, and it was subsequently lost to history (pardon the pun).  Years, decades went by, and I tried to replace the little paperback, but never could.  The only mentions of it online were scholarly tomes costing upwards of $170;  while I loved the subject, I couldn't justify such a price merely to satisfy one fading memory of a thin little paperback.

As previously mentioned, decontam is causing all my presents to arrive at once.  Eleanor had promised me the mini-me Smart Chic Olena/Smart N Shiney after I told her that I did not own, or desire, any of the mini-me Trads... and that I only collected palomino Stablemates.  It seems Breyer can find a loophole into even in the most defended collector's heart.

Although neither of these is strictly a Christmas present, (since I previously owned or had access to them), this feels like December 25 all over again.  Santa has been good to me.