One of the reasons progress has been slow on Akhal Teke presentation set #3 is that I made a mistake.  It is embarrassing to admit, but I didn't detect anything wrong until I reached the bezel stage of the second neckpiece  (which has 3 rows of spots instead of 2).  Without really thinking, I had made it the same length as the first neckpiece.  (The bases were pre-cut.)  A test-fasten revealed that its strap was just a wee bit short.  Oh the sorrow of that wee bit!  DUH, Lonesome Glory's (and every other horse's) neck gets larger the further down it goes, --- and one might just want the second neckpiece to be a bit longer.  Lesson learned!  Play with your tack, before during and after construction!!

Here is a close-up of No. 3's second neckpiece.  No PhotoShopping this time:  This is what it really looks like. 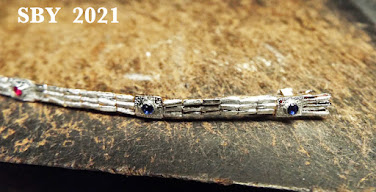 I could figure no way to make the first one longer without serious damage.  The strap (and buckle) is sewn in before the spots are hot-ironed on, so I'd have to peel some spots off to install a longer one, and all the spots are one-time use.  Worse, the neckpiece was the wrong color for AT #4; retrofitting it would mean more sacrifices of the existing jewel plates.  For reasons probably of pride (and possibly of profit), I chose to make a whole new neckpiece.   That is what you see here:  an entire second attempt.  It came out beautifully, thank heavens.

AT#'s pattern is four sapphires and a ruby in the middle, which shows up at the throat.  Here it is on a Lonesome Glory (this body is Goin For Gold, known in my herd as DunRovin): 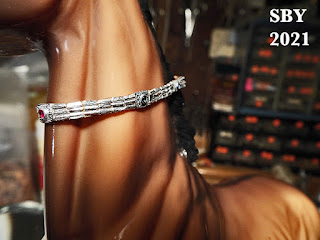 And here are both neckpieces, a 2-row and a 3-row, for AT #3.  These two are adjusted to the middle of their ranges; their buckles are at the middle hole of their straps.  Although hard to see, note the dark brown Edge Cote;  in person it gives definition and heft, a nice touch for so light a leather color. 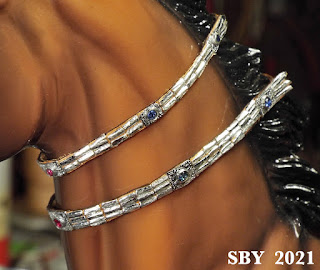 The first attempt will probably show up for sale or auction sometime around BreyerFest.

To my two oh-so-patient customers:  Your orders continue to be my first priority, getting the lion's share of my attention, even ahead of Orlik!  Thank you so much for your understanding.