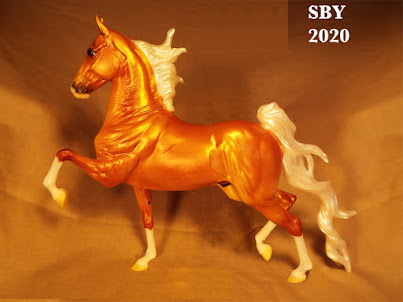 I'd been dreaming of PhotoShopping Hamilton into a trot ever since the first cries of pain arose over the fact that Saddlebreds are not shown in Parade at the rack.   I knew it was going to be a difficult undertaking.   When Hamilton was released in palomino, and later on when I obtained one, the project crept closer to reality.   But it was the Mares In Black Spooktacular Fun class, "Look Ma, PhotoShop," that finally pushed me over the edge.   Thank you Jackie & Heather!

I saved this entry 'til last, even though I'd worked very hard on others.  It was, without doubt, the most difficult of all of my show entries.  In the end this image took me 2 days.  I used all my skill, hard-fought over many years, and (as is the way with PhotoShop) I learned a lot more in the process.  Also, as is the way with PhotoShop (and many other complex projects), what I thought would be hard was easy.  What I thought would not be much work turned out to take most of the time.  Hah!

I started out knowing that the rearmost hind leg would be the one facing the viewer.  Why?  Because my skill did not at all extend to re-sculpting an entire folded-up haunch!   It would be hard enough bending that hoof around.  Here's the start:  a normal Hamilton. 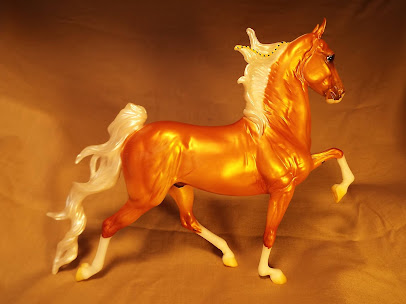 First step:  flopping.  I'm only dimly aware of why I didn't do this entire project from his off side.  I think I was aiming for a saddled horse, that's why.  Even more dimly, I had a preconceived mindset that saddled horses were approached from the near side... proof will be shown later! 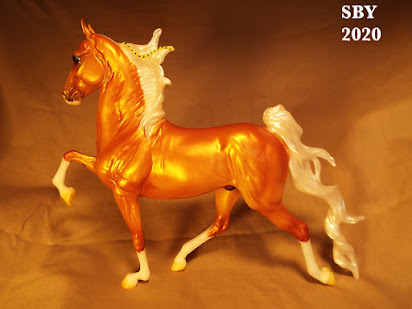 I would be looking at this picture for a long time.  Shamefully, there were very few 'saves' that occurred in the intense flow of this process.  But the one below did get caught.  I had done so much at this point:  moved the near hind hoof, moved and bent the hock (a LOT of work), moved the canon, stifle and hoof of the off hind, and filled in the cloth background.  You can also see how I thinned the stifle bend. 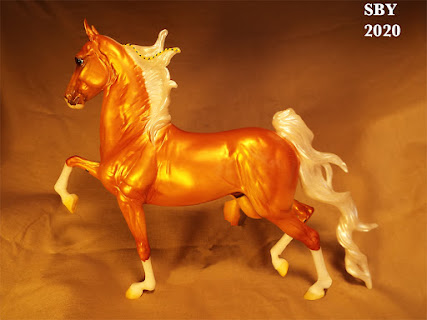 That background was what I'm referring to when I say "what I thought would not be much work."  It was truly a beast to fill in the missing textures.  You can see in the final version how bad it is.  In hindsight I suppose I should've just clipped him out entirely and put him on a new background, but I wasn't thinking of that at the time.  I was so deeply consumed, so carried away, that only another artist will know what I mean.  It's been quite a while since I was swept off like that:  It was marvelous.

Ready for the next step:  bifurcation! 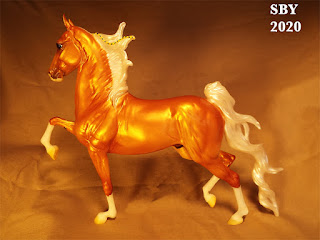 Since a trot has parallel-canon opposite-corner legs, I'd known from the beginning that I'd be cutting him in half, flopping a half and trying to blend the result.  I'd been doing this in my head from day one.  If you try to include a saddle, it would indeed be almost impossible.  And yet here are some pix I took in the early stages of my dream.  These should stand as proof that a complex project enforces its own triage, and winds its way to completion down ever-narrowing paths.  Including a saddle rapidly became a dumb idea. 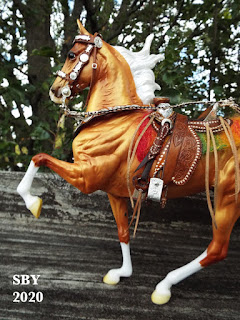 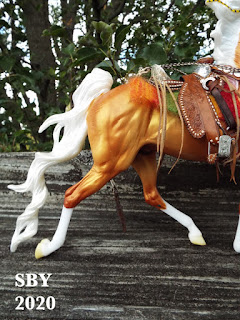 I had thought it would be hard to turn and twist his front half to match.  Silly me.  It was easy.  Here's a normal Nearside shot: 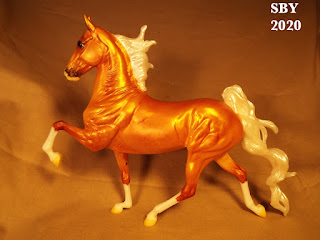 And here I cut him in half and erased the near hind hoof.  I was after a front half with a standing foreleg on the off side.  I didn't have to flop it; that had already happened, with the haunches. 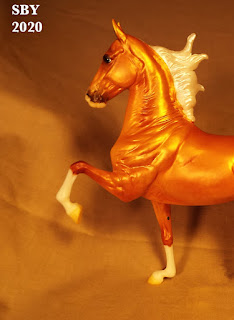 Here was the last, and most challenging, step:  blending the halves.   This is where the background work took forever.  There was a lot of select, edit, copy, move and paste... and a LOT of blend and smear!  I'd learned that with the digitization of the Guide in 2016.  NOTE that what you see here is a re-make of what actually happened, so the halves don't quite line up the same as the finished one does. 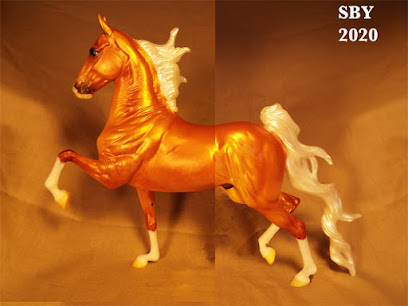 It was at this step that whatever mistake with his spinal alignment was made.  Viewing the finished product, I do sometimes think (with the criticism of the artist, ever present) that his back is a bit arched.  But it was rather inevitable.

The finished view lowered the off fore hoof (compare with above).  I did what seemed like hours of blending, then ran out of spunk and decided to leave the dark upper corner for the signature. 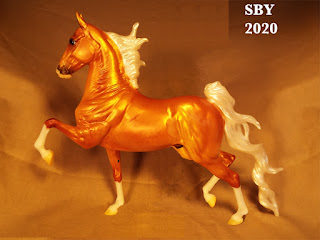 Even now, he still shimmers from all the effort I put in.  I named him Laird Crown Imperial II, even though he is not a real horse.  Maybe he'll give somebody ideas.