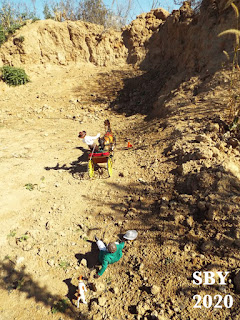 I had so much fun creating Talisman's photo for the Mares In Black Spooktacular online Photo Show that I can't resist sharing some of the additional shots which were taken.  I also want to share how I tinkered with the final result.  The shoot was a miniature adventure, grand all on its own.

Where to photo model horses outside, on appropriately in-scale bare earth?  On a vacant lot about 1km from the house I discovered a scooped-out miniature box canyon, where some bulldozer had done its thing.  Perusing the classlist, the What Could Possibly Go Wrong prompt was combining in my head with Altynai and runaway obstacle driving.  I had vehicles with very long shafts.  Visions from Lightning McQueen out west and from Star Wars pod racers must have danced behind my eyes when I saw that canyon.  On October 9, one week from deadline and one of the last sunny days, I loaded up my stuff and drove over to it. 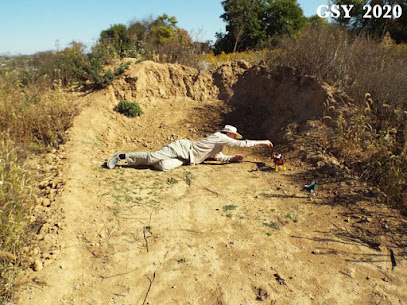 A very personal significance was that this was my first solo car trip without a mask around my neck, and also for so short a distance.  (I couldn't carry the tub for 1km.)

My point was that a standing driver was a driver out of control, and to make everything worse, his driving robe, supposed to be around the waist, was slipping down to his knees.  That he was a cowboy was both totally illegal (no one wears chaps during combined driving events) and charming (he happens to be my favorite doll).

My first set-up of the scene put the cones behind the cart, as having already been driven through.  Of course he'd knocked over a cone (!).  I had to assume viewers would believe the second guy on the ground behind him was a dumped passenger, as I intended, and not an official standing by.  This point would be emphasized by the haiku.  (A separate post on the haikus is planned.) 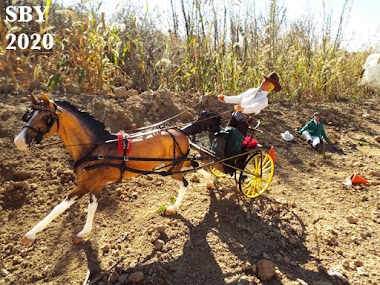 Who should show up but George, out for a walk. 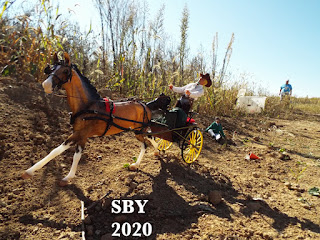 This explains how I was able to get photos of myself.  He said he was concentrating on my expression. 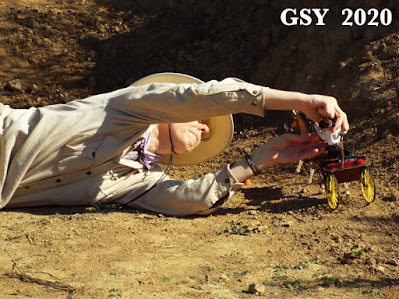 This pleasant interruption over, it occurred to me that "what could go wrong" was more properly interpreted by the cones being in front of the horse.

Luke fell off; so did

the dog; whip's broken, robe's down, 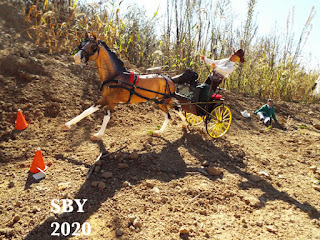 The difference between the above shot and the one below, which wound up as my final choice, was the head angle on the driver.  I didn't like him staring up at the sky.  I wanted him to be looking where he was going.  Only one shot showed that, plus both cones. 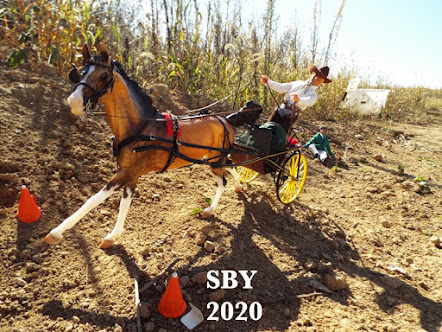 It was only now that I realized I'd left the tub in full view.  Oh, man, what a lot of PhotoShopping that was going to take...!   I could just barely see how to manage it...

I've used PhotoShop for decades, at first under George's instruction and later from a book.  Although it is the most empowering and creative program I've ever used, it also holds the record for 'that part of the computer which most often made me cry.'  Tears of frustration and rage!!  It's taken years for me to learn how to do everything I need for tack, horse and blog pictures.  Looking back it's amazing I kept going.  The clash between an impatient, stubborn, forgetful one-layer-deep artist and a complicated, sophisticated, multi-layered program was profound.  Yet there were enough successes to keep it sweet. 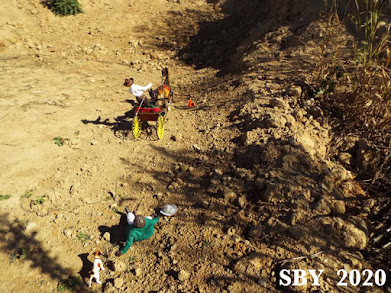 P.S. For those times when I was on the road and couldn't access my own PhotoShop, there is a marvelous free equivalent out there:  Photopea.

Every photo I take is downloaded from the camera (I don't have a smart phone) and organized in folders by date and subject.  Once chosen for posting, every shot is resized, signed (that is, initialed and dated), and then named and saved.  That's the minimum!  There are, of course, tons more possibilities, starting with cropping;  adjusting exposure lightness, adjusting color and fixing dust on a horse are just the beginnings.  This process explains why my posts are as rare as they are.  I have often been jealous of people who could so swiftly post their photos straight from a phone.  I couldn't figure out how they did it so fast. 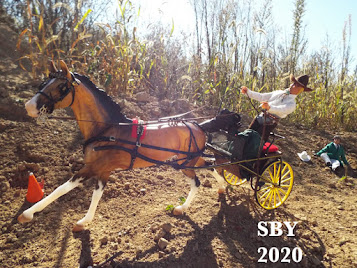 The glorious lure of Spooktacular was that there was a place for this skill.  My formal entry in the Look Ma PhotoShop prompt deserves his own post too!  But back to Talisman and his standing-up driver.  In my eagerness to enter and in my pride and ease of accomplishment, what should have been rigid lines around manipulation of data started bending.  It took a FB comment by a Mare to open my eyes.  (I try to listen to the Mares In Black podcasts in order and have gotten to 33, but have also gotten 48; other recent ones are planned).  In the end only two of my 12 show entries have a significant degree of post-production processing, the golden Hamilton (he was born for it) and this one.

Here's the original, followed by my ultimate entry.  Notice not only the elimination of the box, but the addition of the white hat (it was hidden behind the cart) and the dog being made slightly more noticeable (enlarged).  Not much as it turned out! 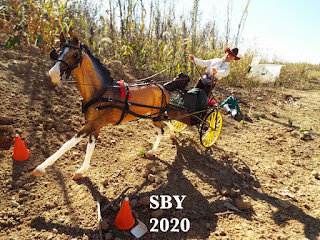 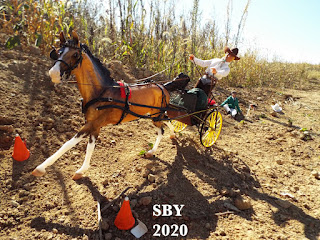 Another place I fixed up was the bit shank angle.  I couldn't keep the long lines' weight from dragging them back, and I hadn't brought extra sticky wax.  I also wanted to practice rotation of a selection, because I knew I'd be using that on Laird my Hamilton. 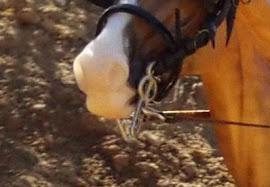 In the end this was too small to notice much, but I acquired the valuable practice of rotating selections in PhotoShop.  That practice would yield truly splendid results when it came to changing Laird's rack into a trot,... something I'd been dreaming of since very early on after I saw him.

But that's another story.