Books for the Journey 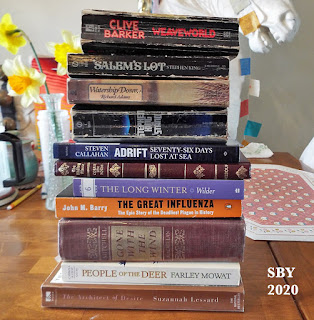 There are hundreds of books I could present as appropriate favorites for the times, but I had to start somewhere.  This first dozen represents a combination of what I've recently read and what sprang to mind when the hammer fell (for me, March 11).

I was in my mid-thirties before I realized I was amassing a collection of survival epics along with everything else.  My book collection, like my model horse collection, is very very broad:  it's a collection of collections.  I was actually surprised.  These epics seemed to form a core of unshakeable interest -- I could not leave those books alone.  In some fashion, almost every book is a survival story; but some are more epic (topical in one case here!) than others.  This post discusses those shown, along with others, starting at the bottom of the stack.

But first:  Is that a horse's nose?!  Yes, that's Rogallo, my carousel horse, in his present position as backdrop to the dinner table.  Bear with me, left to right:  The plastic mug is from Mt Nittany hospital (my surgery and treatments in 2010 & 2014).  The daffodils are from the lawn (my husband loves flowers).  Rogallo, purchased in 1991 and still in primer, wears prayer flags that came in the mail as solicitations.  A Penn State towel is on the chair (we can say we sat on the lion).  The start of the immense bookshelves is at right.  You can see the full set in this 2013 post:  NAN cookies: Of a different color. 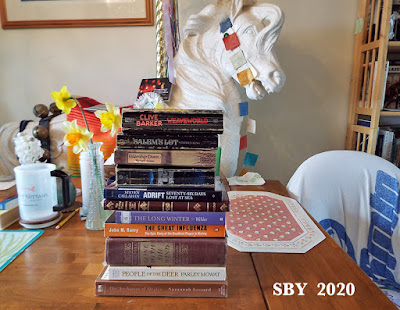 To start with here, I recommend The Architect of Desire, by Suzannah Lessard (1996).  While this is the one of these 12 that deals least with plague, it has great relevance and good answers for a large university troubled with sexual abuse issues, which alas is one of Penn State's claims to fame (er, infamy).  She relates a family chronicle spanning 4 generations, largely set in the ragtime era (insert grin) and writes in lovely descriptive prose.  Only an architectural critic could so capture the beauty and relevance of surroundings both interior and exterior: she traces the landscape as self.  I first encountered this author in Architectural Digest.  In a year's worth of issues her article was the only one that stayed with me. 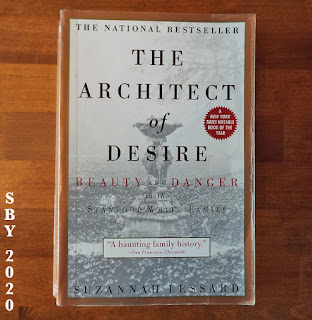 People of the Deer (1952) is by Farley Mowat, one of my favorite authors and a world expert on the Eskimo or Inuit as they are named today.  I include it here solely on my memory of his discovery of an Inuit village after its total destruction by smallpox.  Long after I'd forgotten the rest of the book I remembered that. 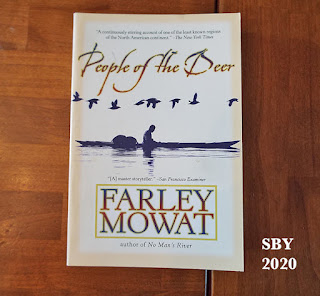 I have long enjoyed this pair of heart-lifting classics.  Laura Ingalls Wilder's The Long Winter (1940) is just about my favorite survival epic and my clear choice amoungst her canon.  The Hiding Place (1971), by Corrie Ten Boom, needs no introduction from me.  We are at war now, and so was she, swept up by forces beyond her control.  Her courage has inspired millions.  Somehow I have not read Anne Frank. 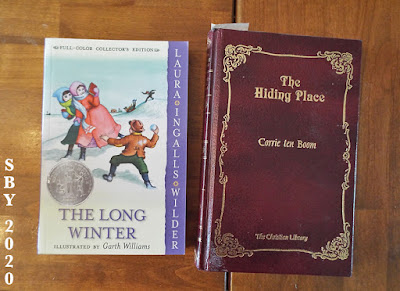 One of my probable-top-ten books is Gone With The Wind.  Along with Ben Hur (by Lew Wallace, 1890) and Sybil (1973) by Flora Rheta Schreiber, this great classic saw me through college and developed my mind.  I discussed the story endlessly with my roommates.  My copy was given to me by my grandmother.  The book saw me through my marriage. 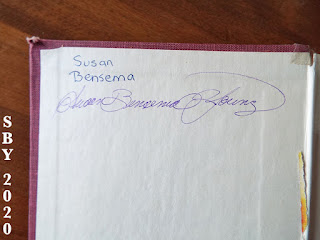 The story has the almost unknown power of a book to inspire its own illustrations, in the minds of its readers, totally independently of any movie.  I have a lot to say about movies versus books...!  May I mention I did not see the famous movie, Gone With The Wind, until after I'd read the book many times and even drawn pictures --- ?!?
As for Scarlett herself, the first time I read the book I identified totally with her.  The second reading and every time thereafter I realized what a selfish, childish creature she was...  But how perfectly balanced the story's conclusion, to the point where I simply refuse to read any sequel.

So when the pandemic swirled into notice, two books rang like bells in my mind, one fiction and the other, umm, most definitely not.  This is the blessing and the curse of having read so widely.  I haven't read deeply about the Bubonic Plague (apparently I have limits) but I had read John Barry's The Great Influenza (2004), and...  just reread it.
As I told a friend, parts are truly terrible, but there are very clear and understandable descriptions of the actions of viruses in the body, as well as the life stories of some of America's greatest germ hunters and the founders of Johns Hopkins and the Rockefeller Institute, amoung others.  There is a memorable essay from a survivor of the 1918 flu.  At this time, what sticks in my mind is a brief description of how a doctor experimented with gauze masks for his patients and how it was so successful he dropped everything and just started mass-producing them and mass prescribing!
This a day after Gov. Wolf of PA has requested all wear masks when in business... (April 3) 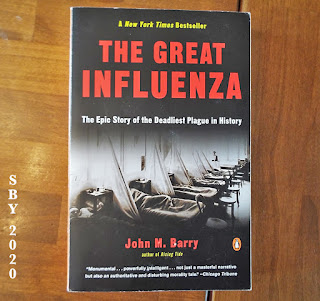 The other bell-wether book I had read in 1980 (I think; it has 2 publication dates, 1978 and 1980, and I don't remember exactly).  Of course this is the greatest worst classic, Stephen King's The Stand.
I hesitate in recommending King; he is very often too much to stand, pun intended.  Yet while his subject matter -- horror -- can be execrable and beyond vulgar, his style was so true and powerful that it has influenced my whole writing  life.
When first I encountered The Stand I was still a teenager, and well I remember how warped I felt for days -- how twisted out of true the whole world felt, how powerful his spell was in describing most of the population falling to shifting-antigen flu.  Looking back it is a wonder I kept reading him!  (I did in fact stop reading King after Eyes of the Dragon; he had finally gone bad for me, been out of the fridge too long.  I resumed with The Dark Tower series, which is a magnificent survival epic of its own.)

I'm adding Salem's Lot (1975) to my list on the strength of one sentence, so eerily true now.  It's a quote quoted within the book, originally by Bob Dylan.  You'll notice a lot of these books are from the 70s.  That was my teenage decade, and somehow books really got 'set in' during those years.  I was strongly dissuaded from watching TV by my Mom, something for which I'm now grateful.

"Tell you now that the whole town is empty." 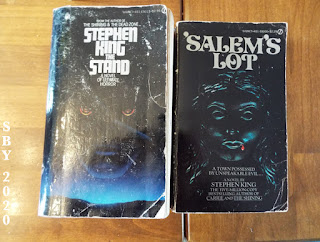 A genuine classic of the survivor literature and one of my great favorites is Steve Callahan's Adrift (1986).  I have found this book almost impossible to put down.  The author is also the illustrator.  Marine themes are strong favorites for me and this one is even better than Sailing Alone Around the World by Joshua Slocum (1900), another survival epic and a great journey story.   I stole my copy of Sailing from my now-ex-brother-in-law (it is the only thing I have from him). 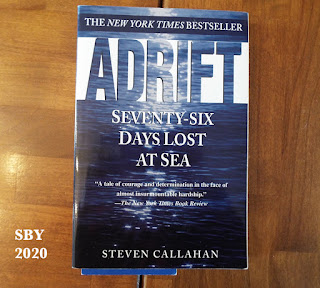 Watership Down (1972), by Richard Adams, belongs in the survivor canon both for plague and general survival.  (Note that I have not read his followup, The Plague Dogs.  Or rather, I started to, but got turned off.)  I have always loved Watership Down's bucolic setting and adventurous, innovative characters.  There is the additional charm of seeing small things writ large, a perspective familiar to the miniaturist.  My copy is a gift from my brother. 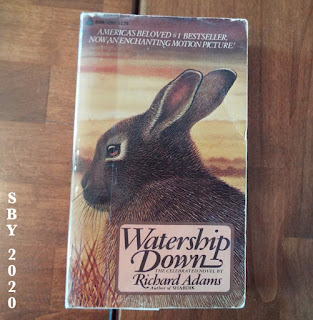 To top off this list, I am moving back into the realm of horror, yet Clive Barker is a totally different writer than Stephen King.  Weaveworld (1987) is ultimately about saving the world with a book, and I find that a very valuable message.  Barker's imagination is unparalleled, and if you can lift over the vulgarities and see the theme -- the Scourge repelled -- you will find why I am so attracted.  Another book of his, Imajica (1991), deals with parallel alternate worlds, which I also find very, very appropriate these days. 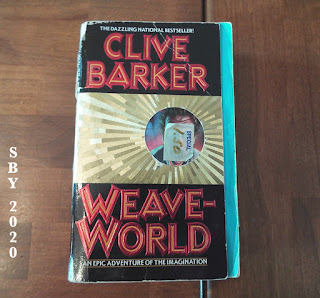 (I'm hoping I don't have to explain the placement of that price sticker.)  Like so many of my bargain books, this one came from the American Association of University Women's annual spring sale.  Known in my family as the Used Library Book Sale, it is one of State College's most recognizable and favorite events.  I've had to miss it for years because it happens after we'd leave for our summer trip!  This year the AAUW is "postponing" the sale.  Like so much else, my family will just have to wait and see when we can next bury ourselves in seas of boxes of books.  On the last Saturday you can buy an all-you-can-carry sack of them for $3...
Meanwhile,
read a good book.