A Tribute to Ruth Ruth White Young, my mother-in-law, after what can only be described as an extremely long literate and epistolary life, was finally gathered in April 20.  She went home to the Lord at the age of 100 years, 2 months and 18 days. 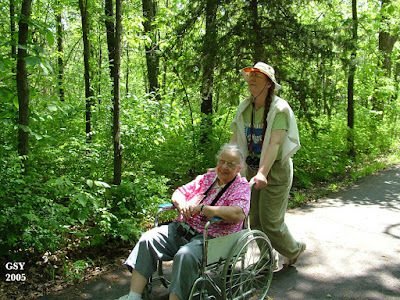 I have a feeling I'll be saying for the rest of my life, "It wasn't Covid19."  Ruth had been in Skilled Nursing for full six years six months.  Gradually over that time she reached stages where she could neither stand, walk, hear or talk.  Blessed with a very sound constitution, she was cursed with dementia.  A second round of hospice (the first was suspended after more than a year of steady state) failed to rekindle the spark.  This gallant and essentially unreachable soul had nowhere to go and nothing to look forward to.  I believe God took pity on her. 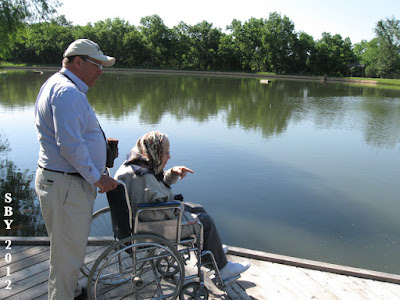 And on us.
I had known Ruth for longer than I've been married -- which is 32 years this June.  Yet I was unable to really be close to her.  I had a 2-week intimate chance when her husband passed away in 2002.  I failed to establish more than perfunctory connectedness.  We were never close friends as I define the term.  She was of a generation that stuck out their troubles alone.

A major difference from me was that she never learned to drive.  Such a reneging of power I could never understand.  I once asked her about it.  "Oh," she replied dismissively, "I don't need that kind of responsibility."  Yet this was one of the most practical and well-organized women I've ever known. 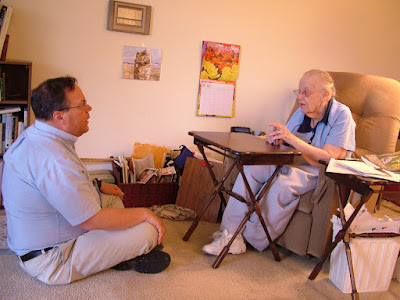 Until she was unable to communicate, the bond between the mother and her only child was strong.  How many wives can say of their husbands: He wrote his mother a letter every week of her life?!?  And she answered (at least up to 2013)!  This went on from the mid 1970s until her death.  (By the end we were addressing to her caretakers.)  Do the math:  that's around 2,250 letters.  Thank heavens I was just as much of a writer, and understood.

Ruth's excellence as a teacher manifested in one of the finest professors I know.  In her eighties she tackled learning to use a computer, and they emailed each other nearly every day until 2013, more than a decade.  Even now he continues this with his own mother-in-law.  :) 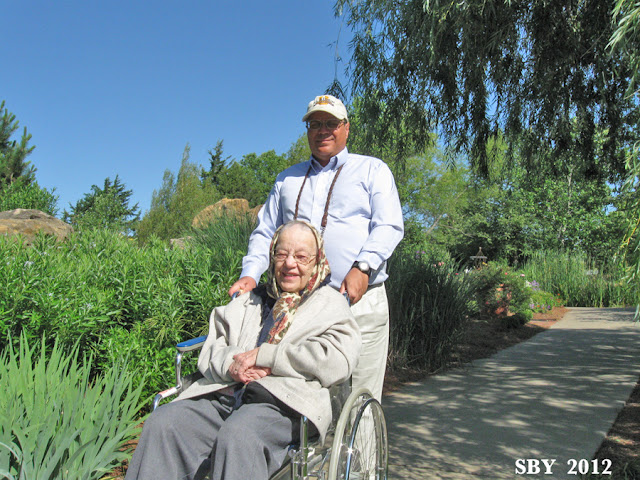 Ruth was a flower person, and George inherited her green thumb.  She loved birds, something he took and ran with.  The family story is that a Red Tailed Hawk spiraling up from a boyhood field inspired his meteorological career.  Ruth was a needleworker of no mean ability; we have 2 full size quilts by her.  One is a fantastic crazy quilt and the other is "Larimer County by Air." 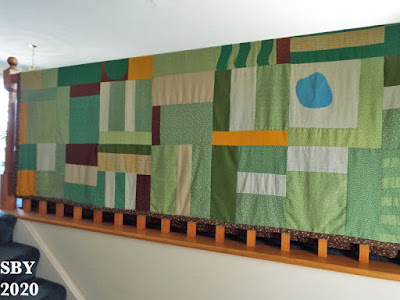 I gained several pieces of embroidery and needlework from her. 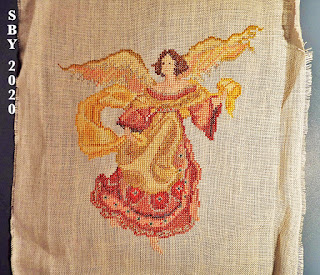 She was a lover of books, especially biographies and on theology.  Probably my favorite book gift from her was Oh, The Places You'll Go! by Dr. Suess.  That spunky, scrappy spirit was one of the best features of this woman. 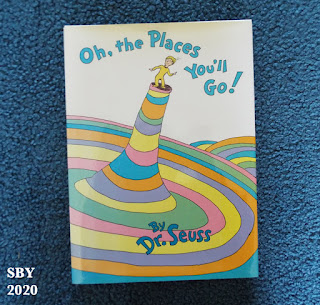 Above all Ruth loved children.  Kids age 4 to 7 were her comfort zone.  In 1999 we helped move her to a Senior residence with Assisted Living, Overland Park Place of KC.  It was not long before she discovered there was a day care center right across the back street.  A longtime friend recalls going to the rescue for her "emergency trips to the library" for children's books.  I well remember kids' graduation ceremonies -- performances! --  staged in the cavernous atrium, attended by Grandma Ruth.  My own generation knew no such thing.
After a child was age 7 or so, Ruth's brightest attention started to dim, and by 12 or thereabouts her son was learning habits of social distancing which had nothing to do with any virus.  Looking back on his relationship to his parents, compared to my own, I am always struck with grateful amazement that he turned out as good as he did.  Despite the letter-writing, there was a limit to how deep one could go with Ruth.  Although she wore the pants of the family (my husband once described his father as the Ultimate Southern Gentleman Collie Dog, completely harmless), Ruth just didn't support deep emotional analysis or far-ranging personal conversation.  I did try.  She once told me, after I had begged (this was after 9/11), "I don't have access to those emotions."  My own theory was that growing up during the Great Depression must have done something strongly restrictive to her soul.  Ruth went on to marry a postal clerk, raise 1 son (she said she wanted 6, but Ross demurred), volunteer in the community and keep a raft of charities and friends.  "That lady sure could pick a good charity."  I wrote my first letter to her in 1985, and she answered right away. 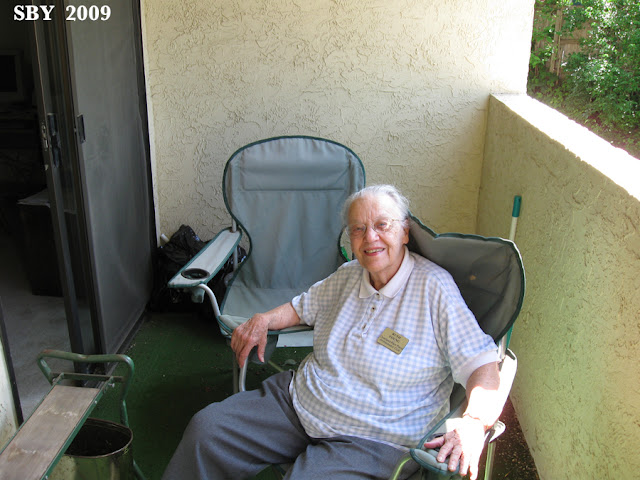 This is my much-polished pair of memorial paragraphs, followed by the official obit:

For OPP and Children's Cottage:

For 15 years, 1999-2013, Ruthie was part of OPP [Overland Park Place].  In that time she grew into the hearts of all who knew her.  She's been a spunky friend with an infectious grin, who always had something to say in her schoolmarm style.  She was interested in many things:  flowers, gardens, birds, worthy causes, the Kansas State School for the Blind where she volunteered for 30 years, and the doings and welfare of friends.  But I think I touch the core of these interests when I mention Children's Cottage, the nearby daycare center.  It is because of Ruth's enthusiasm and love for these children that OPP rang so frequently with their happy voices.  Grandma Ruth, as she was known, loved nothing better than picking out the perfect book to read to them.  She was always a much-hugged guest of honor at their graduation ceremonies.  Nothing brought her greater pleasure than helping young minds find the joy of learning.  On May 9 2013 the children's laughter echoed for Ruth one last time.  This session she merely watched while her son read to the children.

Ruth's spirit was characterized by a love of books, flowers, birds and children.  She delighted in teaching the little ones, and this spirit of guidance and mentorship was passed down to her son.  She knew how to encourage and reassure the inquisitive spirit of a questing child.  Ruth was deeply religious and amassed a large collection of theological books, and an even larger collection of questions.  Her belief in good works was lifelong and far reaching.  Unlike many persons of her generation, she mastered computers in her eighties and emailed friends every day.  Ruth made lasting friendships, trading correspondence with college friends and former students into her 90s.  She enjoyed correspondence once a week with her son from his college years to her extreme old age, and I am sure that when she reaches heaven, she'll get right back to writing letters from there.


Obit  as published in the Kansas City Star:

Ruth White Young, 100, of Overland Park, KS, passed away April 20, 2020 at The Forum in Overland Park.  Ruth was born February 2, 1920, in Waukesha WI, to Eugene A. and Aimee Bushman White, the 2nd eldest of four siblings.  She graduated from the University of Wisconsin with a degree in pharmacy and from the University of Minnesota with a degree in nursing.  She worked for Milwaukee Hospital as a pharmacist, then joined Frontier Nursing Service in Kentucky during a time when patients often arrived on foot and emergency personnel were sometimes dispatched on muleback.  She never did learn to drive a car.  Her later career included teaching and nursing at Bethany Hospital and the University of Kansas Medical Center.  In 1954 she married Ross Sinnett Young and they began their married life in Kansas City, Kansas where they resided together for the next 48 years.  During this time Ruth led a Girl Scout troop and served as a volunteer Braille teacher at the Kansas State School for the Blind for over 30 years.  Ross served in the Pacific Theatre of World War II and spent the remainder of his career as a postal clerk.  Ruth was preceded in death by her husband and her three siblings.  Ruth is survived by her son George Young and his wife Susan Bensema Young of State College, PA.  Her church was Colonial Church of Prairie Village, 7039 Mission Road, Prairie Village, KS.  Burial in Leavenworth National Cemetery, Leavenworth KS.  Condolences at:
Dignity Memorial Kansas City Ruth Young 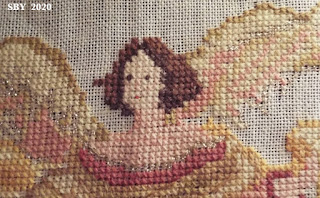 She's with the angels now.

Editor's Note From the Future (May 2):
Colonial Church of Prairie Village created a lovely online memorial service for Ruth.  It aired today on YouTube and on FaceBook.  (Below is the YouTube link.)  It's half an hour long and features Pastor Aaron Roberts (and organist Joseph Kern).  There are pictures from this blog, hymns and prayers as well as stories of Ruth.  We were very pleased with this pioneering effort and feel sure that Ruth would have approved.
Colonial Church of Prairie Village Ruth Young Memorial Service