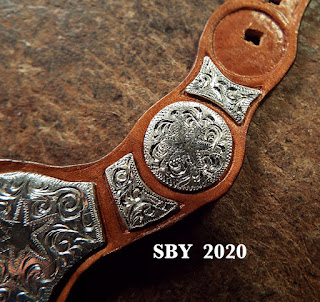 So many things I could've blogged about, yet what comes out?!  Fixing conchos on the breastcollar of TSII #457 -- !!  Sometimes this narrow focus is something to despair over.  Other times it is a gift, a blessing.  Today it's what's on my mind right now and what my camera caught.
Like most great model tack, this breastcollar is still teaching me lessons.

For starters, I really didn't like that little concave-arched concho under the center medallion.  Here it is as we last saw it: 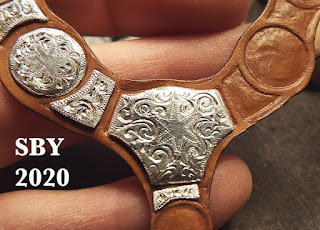 Even if you wiggled it level, there is a noticeable asymmetry.  I'm not sure how it escaped me as long as it did.  Sometimes I blindly rush ahead (yeah, never happens, right?!).  I must have thought I could file it down into shape.  Also, for days I've been wondering how I was going to disguise the cuts in the leather to its right:  A challenge worthy of the greatest leatherworker.  Yesterday it finally dawned on me that the best solution was to make a whole 'nother concho, from scratch.
So I did.
Here it is before engraving.  You can see the improvement in the overall shape. 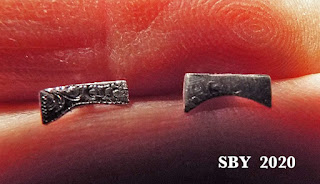 Here's a rare sight:  testing before engraving, to check size and fit. 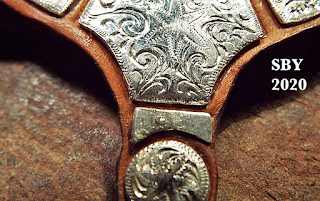 I was very happy with how it covered up most of the right-side cuts.  I also tooled those cuts down.  This after-the-fact smoothing is as close as I can get to erasing tooling.  It helped.
Once engraved, the concho fit beautifully. 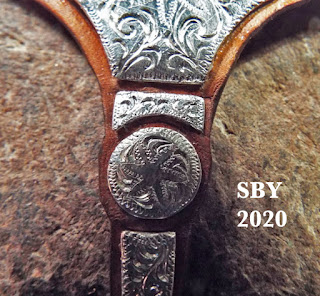 There is more going on here than just replacing one concho.  See the upper right (offside) of the central piece?  The slight bulge is an attempt to raise the leather and hide the gap between silver and tooled edge of its 'pocket' or indicated space.  I've used the equivalent of repoussee, a silverworker's term for 'hammering from the back.'  I suspect the more correct term is to 'just stick in a shim.' 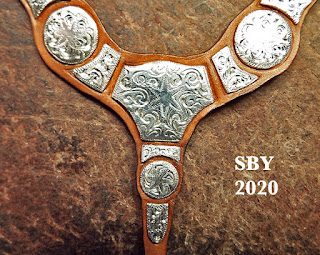 Below you can see the leather shim or 'plug' I put in there.  You can also see the embarrassing mess of laces holding down the various conchos of the martingale part.  This was necessary because of the different angles of soldered loop, and because of the replaced concho.
Other problems included a gap between the near side of the central concho and its tooled leather pocket edge (I still don't have words for these things)(indicated edge?). Here I'm using the same idea of pressing from behind to bring up the surface. 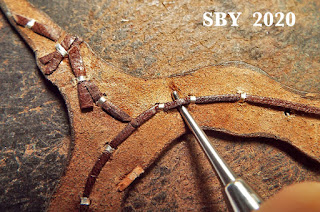 And gluing in a shim piece. 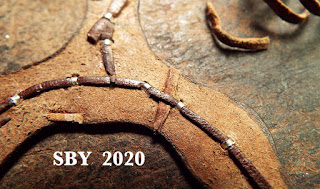 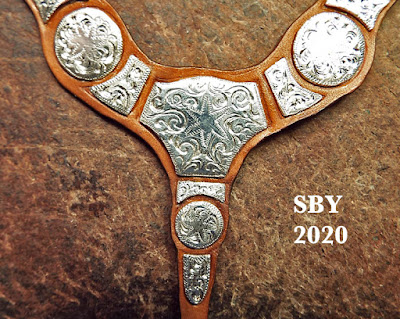 Next is setting the conchos, that is, gluing them in and lacing them down.  Can you believe I needed to re-learn to glue them first...?!  This is where test-fitting them reveals that more tooling needs to be done.  The next pair of shots shows the same pocket two different ways.  I've cut wider lines and tried to tool the edges 'down and out' so as to better embrace the concho.  The goal, as stated before, is to form a 'shadow line' around the silver edge, making it look as though the whole concho is sunk into the leather. 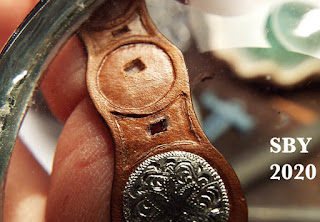 In real life I shouldn't think it'd be nearly as hard as it is in one-ninth-scale miniature. 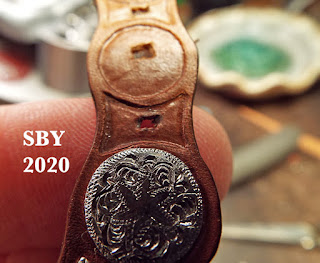 Finally I am happy with it.  I discovered from my earlier (2014) notes that I called these in-between, concave-sided ones "X conchos."  Good enough. 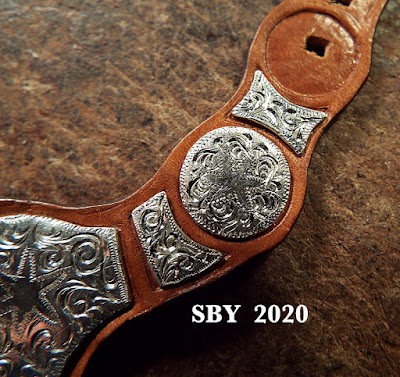 This really is only a small portion of the subjects I could blog on.  Like so much else,
we'll just have to see what happens.
Posted by timaru star ii at 11:23:00 PM