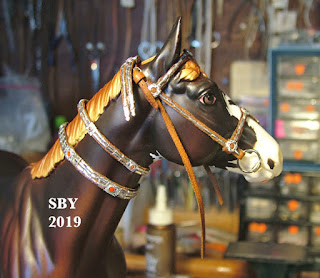 Another short post about a work truly in progress!  Within the past week, great mysteries have been solved, the cape was done and the bridle well started.  I still have to do the reins and breastcollar, but at long last my Rio Rondo order(s) have come in.  Happy tackmaking over here!

When we last saw this piece, the struggle was over the buckles on the neckpieces.  By the way I found out 'neckpiece' is what a fellow model horser who makes full-scale Akhal Teke tack, Mayfield Magic Farm, calls them -- and that's good enough for me.  The native word for them is Aladja or Alaja.  The neckpieces were earned as prizes for racing stallions or given in recognition of superior performance.

I did reverse my two buckles, and thought I had solved the problem.  Look at it:  The tongue is protected by projecting leather on both sides, the strap end goes inside, and metal contact with plastic is light -- I felt very light.  Trust your OF -- this is the same stance as in the Guide:  a touch is not a scratch unless dragged. 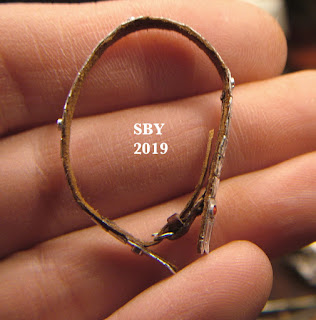 That was before I tried to put them on the horse.  Alas, I had to practically turn them inside out to reach the buckle at all.  Clever as it was, it wasn't going to work.  As of this writing I haven't solved this particular problem.  :(

One mystery that was solved was where the heck my Rio Rondo order had been.  Carol had shipped it but it hadn't arrived in more than 2 weeks.  On Saturday the 6th I found out it had been hung up in Pittsburgh due to a mercury contamination scare!  It arrived today, and now I have more than enough Teke leaves...

The next part to be finished was the cape.  Mayfield does not name this part (that I have found).  I am choosing to call it that myself.  'Poll piece' would also work, or 'crown.'  I tried something new with this one.  I had needed a bead, tiny ball or seed-bead inside the 'carnelians' to help doming and bascule.  Microballs were too small for the cape jewel, so I found rose-colored glass seed beads, but they turned out too big.  So I hit one with a hammer.  :)  Glass particles (spicules!) at that scale are NOT round whatsoever, but some outer parts retained their original finish.  I glued one in as a base.  It looked beautiful. 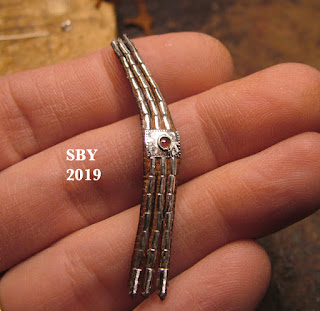 If I had not tried so hard to imitate carnelian on the rest of the set, this might have passed.  But in fact this bit of glass does not fill the bezel.  You can see the sharp glass edges. 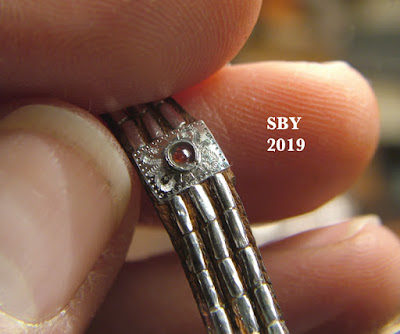 Here is Brasenose modelling his cape.  This is after the 'carnelian' was applied.  There were times it truly seemed a crown. 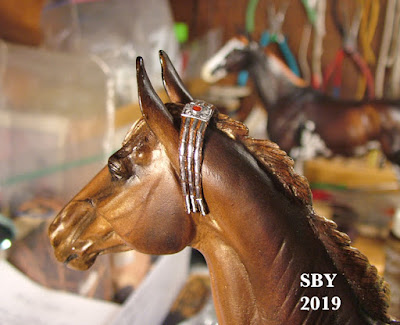 Now at last I could start the bridle.  I normally don't work with garment leather;  it is very hard to skive.  But I wanted softness and flexibility above all, and it supplies that -- at the price of being almost impossible to edge-slick.  Normally I soften up leather with oiling... but the hot-ironed spots are stopping that with this set.  Glues and oils just don't mix well.  It was worth the effort to me to keep the flexibility.
I made the bits from stainless steel 18ga wire and some silver-plated brass rice beads which I cut down.  I'm not sure it's real silver; it could be chrome or nickel or some 'pot metal' (they weren't expensive enough for real silver).  Filing off the pliers' teethmarks caused a faint golden color to show.  Generally I avoid exposed brass in model tack, but in this case it would be far from touching leather. 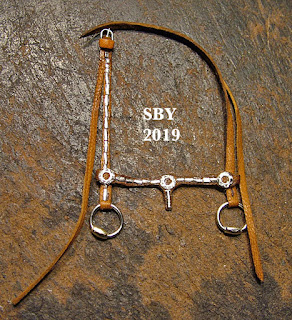 Once again, the difficulty of the jewels is causing me to build them in sections:  bezels next, then microballs or spicules, and color after that.
A last-minute photo of everything together on Palatlakaha (Emerson) shows how far we've come... and how far we've got to go. 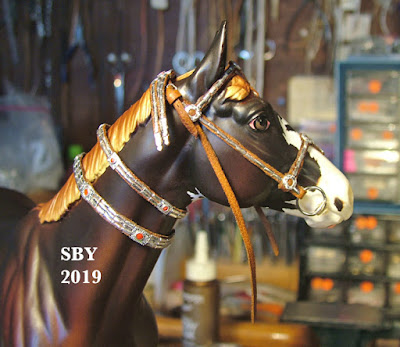 The sneak peek on Breyer's website of what looks like a dun or perlino Emerson is causing me to make the wildest accusatory connections.  For of course I think Emerson would make a dandy Akhal Teke.  And of course Tekes are famous in their perlino color.
And that's the color I'm dreaming of for my next painted horse.
And we know Breyer haunts this blog, as it does others...