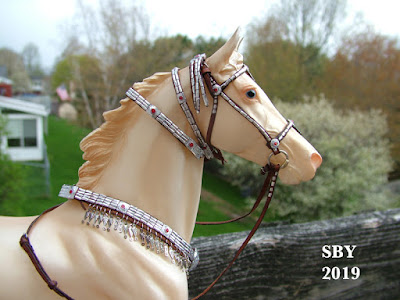 I am pleased beyond belief to present the completed prototype of my Akhal Teke set No. 1!!  Yesterday's photo session tried it on two other molds and many different colors, with surprising results.  Shahzada the Perlino was a clear winner in the beauty contest! 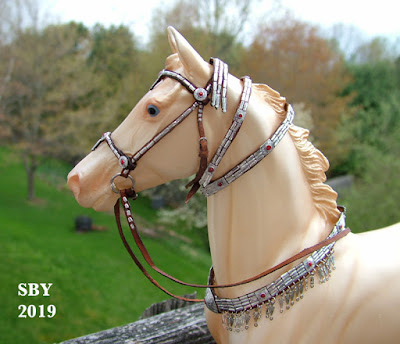 Until Emerson, I would have said Breyer's closest mold to the Akhal Teke was Lonesome Glory.  As it happens I have quite a few of them (tries to hide a smile) and while some are Appies, others are solid colors, much more fitting for the Teke breed.  The moment I tried this set on Shahzada, I learned that for all his length of leg and giant frame, Emerson / Palatlakaha has a small head and a skinny neck.  He also hasn't got much mane.
That made for some creative photo angles. 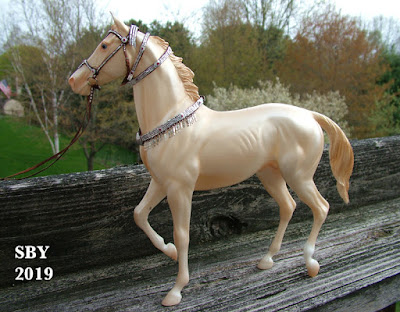 In the ensuing fun fuss of tacking up, I learned that tongue buckles had indeed been the right choice for this piece.  Their level of detail matched the overall, a great goal of mine; and their adjustability really helped.  Whether to put the straps on the mane or the throat turned out to depend on both mold and angle; I wound up trying both.  Lest you worry that Shahzada is having trouble breathing -- (I assure you he has just as much air inside as ever!) -- scroll down to where I tried a different orientation.

Here is Palatlakaha in his full glory with the finished breastcollar.  All praise is due Rio Rondo for their cunning little dangles. 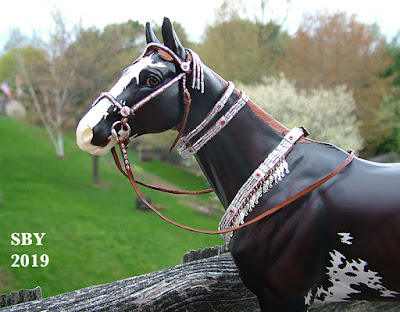 I spent a lovely two evenings listening to movies whilst creating 52 stainless-steel rings for the leaf etc drops, stringing and hanging.  Only now did I realize I'd shorted myself sufficient leather on the off side for them.  How blind can I get!!  I had to glue on a whole side strip of more leather.  Long gone are the days when I refused to use glue... 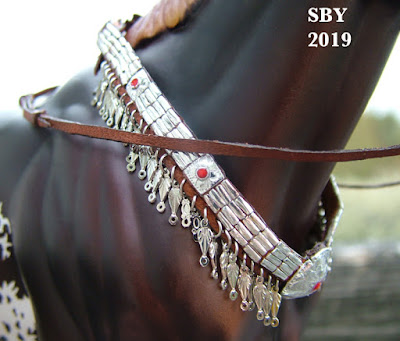 As a break in the monotony (!) I used 2 little bars on each jewel-plate instead of more leaves.  The horse was big enough to justify the maximun leaf size, i.e. I left the end circles on.  I suppose the rings are a bit big, but any smaller and I wouldn't have been able to manipulate them.
Palatlakaha pretty much needs the straps to pass under the throat. 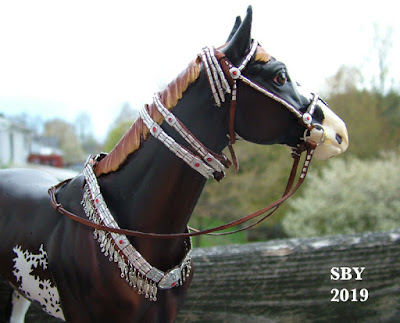 But the arched neck of the Lonesome Glory presents a challenge.  The mane was a real obstacle.  When I tried a new orientation of strap, I was pleasantly surprised: 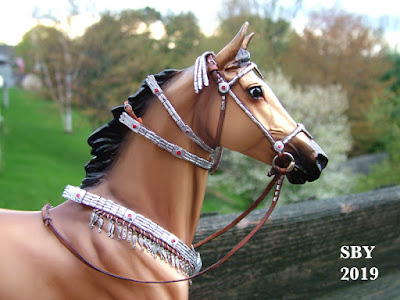 Not only was the neckpiece less obviously hung up on the mane, there was more room for the horse to breathe!  always a plus.  The breastcollar being nearly too small was forgivable due to sheer beauty.
Birds-eye view again. 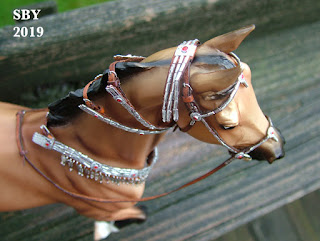 This angle shows how dainty the tongue buckles are.  What is less obvious is that the poll buckle has to be opened to get the bridle off, AS WELL AS the throatlatch.  There's no disguising the time  it takes to switch this set from horse to horse.  Slow and steady is best.

Akhal Tekes famously come in black, and I happened to have a Charcoal Lonesome Glory (thank you Eleanor & Robin).  I thought the set would look fabulous on this horse.  Photography isn't quite the same thing as in person, though.  This is the best I can do: 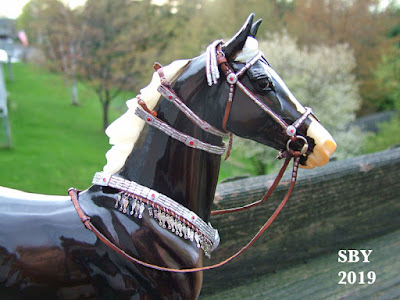 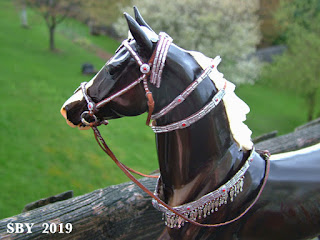 By now I had figured out how to fit the set to the Lonesome Glory mane. The full scale references sometimes have both orientations at once:
Where to pass the strap appears to depend on the mold, how much silver you're dealing with and which side of the horse looks best.

Some reference photos I've been using:
The temptations, vagaries and struggles I went through making the breastcollar could be captured in a single shot.  After 40 years in the model tack business I have quite a few jewels.  This one nearly undid me.  For a few moments, the incredible lure of a light-gathering cabochon had me considering tearing out all my hard-earned authentic 'carnelians' and sticking in little glass beauties: 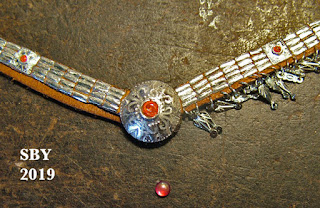 Caught in this in-process pic (above) is a glass bead in the central concho.  The hole in the middle didn't help and couldn't be covered up.  I cut it out and started again, not without great yearnings. 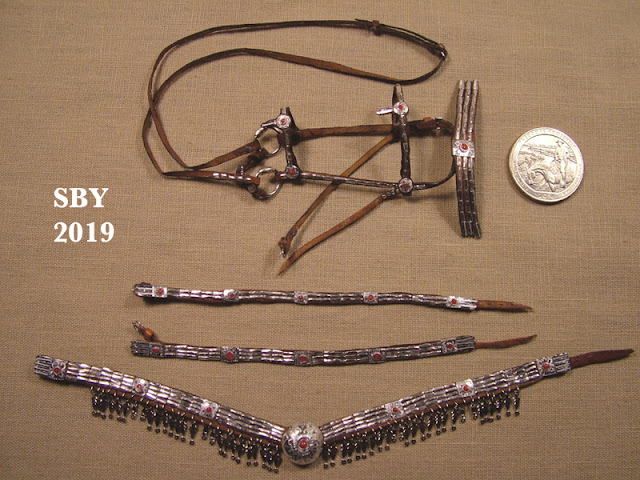 I am insanely proud of this set, and secretly relieved I don't have time to auction it off until after return -- possibly not til BreyerFest.  I get to keep it for a while.  :)

A little math:
Nearly 70 hours (69.4) and almost 5 weeks (March 20 to April 21), finished on Easter.
24 jewels and their plates:  each plate handcut, holed, cleaned, stitchmarked, engraved and bezeled, then 'carnelians' painted in layers and glossed, often with microballs glued inside for forms.
8 other plates, with end tips handcut, engraved etc.
8 handmade tongue buckles, with sewn keepers.
327 handmade metal spots, each 1mm x 3mm, shaped and stamped then hot-glued.  This is counting those that were cut up to make the smaller spots for reins, throat and poll.
52 leaves and bars and their rings; each leaf filed for smoothness on both ends. 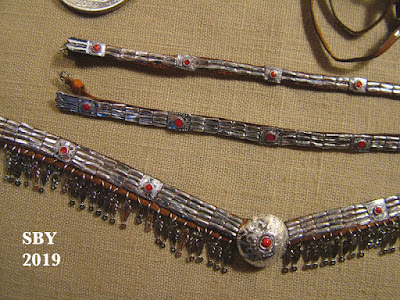 It was worth it to get this 'test' piece done, even though it all but destroys my chance of making a NaMoTackMo piece for myself.  I wanted to use up my mistakes.  I sensed it would take a long time and started early; I just didn't realize HOW long it would take!  Finishing AT1 has opened up a whole new field for me, and with it, possibilities long desired but mostly despaired of.  To the question of faceted light-gathering versus merely opaque colorful, my answer is now:  Some of both!
Here is a Test Sneak Peek to help you get the idea: 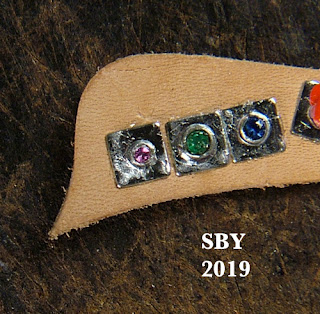 Yes, that is a genuine Ruby, Emerald and Sapphire.

The last shot is of Brasenose looking bemused, but finally proper, in his borrowed finery.  He is smaller than Emerson and it shows in the breastcollar. 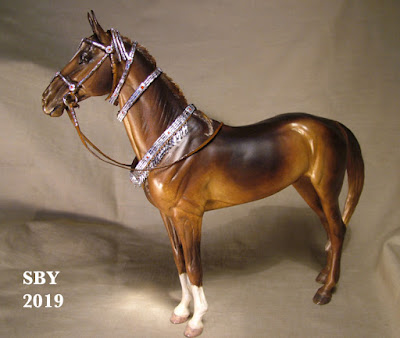 At last I have what was so long dreamed of...  and a whole lot more inspiration to go with it.