These shots are from my 'midnight photo session' (2/20) as well as the morning after (2/21).  Hopefully you'll forgive yet another post on Brasenose!
He really is extraordinarily refined.  Dry -- I'll give you dry!  The result is that only my finest tack looks good on him.  Only my best Corinne Ensor English bridle:
I have a fair amount of English tack, even one with a braided browband by me.  But the instinct for refinement began early and stuck hard.

Only the thin metallicism of my Foust costume halters.  We knew this from early on.  Below is one of the few photos capturing the time he wore tack during his painting.
Since the 80s I've had several of these Arab Costume halters that were extraordinarily thin, with metallic threads in them.  Out of my collection of blue, red and watermelon colors, blue's the best for Brasenose!  I'm reasonably sure they were made by Renee Foust, but not 100%.
This is as close as I can come right now to the authentic desert look.  I'm ashamed to confess I didn't notice the tarnished chain until now!!  That means it's sterling, which is a good thing.

Only my finest, thinnest Western tack looks good on him.  Of all my pieces, only the refined delicacy of my Griffindoone curb works -- but that could be its colors:  copper, silver, wheat, white tassels.
Strangely, not Heather's or Regine's or even my own tack works tonight.  Later I might try my Fan Bridle or my Braided Snaffle (which I did:  see below).  For tonight, refinement is the catchword, spread across all 3 cultures.
This Griffindoone style really does have a slender elegance to it that is entirely appropriate. Forgive the curb:  his muzzle is quite small and I just didn't notice!  I shortened it later but it still wouldn't get short enough.

I knew from the start this horse was going to look interesting in a great many cultures' tack.  I did not intend to limit him solely to Akhal Teke gear.  He's a dream of mine and not based on reality, though I shall forever be grateful to his Russian provenance.  I want to try English, Western, Arabian and (eventually) Harness on him, as well as the expected Turkmene styles of neck jewelry.  All in good time!

I am calling this his Calendar Shot.
He expresses my own Western roots as well as an Eastern refinement (not to say mysticism).  As I can do any horse culture I wish, so this horse, who feels so close to the essence of me tonight, can wear many kinds of tack.  Yet the king should be braidwork.  The blue Tassel and the Dunne seem better, right now, than the Ensor -- because they're braided, or appear to be.
I'm amazed, but now that he's born (finished, separated from me, independent:  that calm, measured, assessing gaze!) it's an amazement of a different kind.  Previously, it was all about me:  my skill as a painter, the progress of the job.  Now it's all about him.  He puts my tack collection -- one of the greatest I know -- to shame.  A higher level of detail has arrived, and I can only bow down before it.
If none of my pieces are refined enough -- that just means I haven't yet made a piece good enough for him.

Next morning, such philosophizings have faded.  I wanna know what he looks like with various bridles and hackamores!  Tack show time!  Here's a wild one:
This is one of the more interesting pieces I have.  She put such character into it -- the first time I ever saw braided horsehair done in model, and the first real rawhide wrapped buckle.  Juliane made the bit herself out of sheet brass painted silver.  The little tag is my attempt at true museum provenance; clearly, I haven't tagged all my pieces!
How good he looks in Western... it's reassuring...

Here's an oddball, my Braided Snaffle I was thinking of last night, taken in my traditional shooting spot with the tree behind. 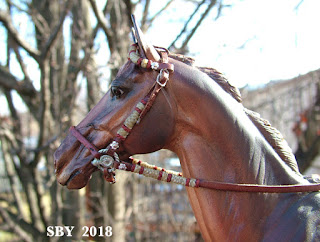 Doesn't work, does it?  The tree camouflages his head, while the green in the sinew buttons clashes with the red.  Worse, the mouthpiece isn't positioned right.  It would work on a real horse, but models have restraints.
We have reached the golden oldies of the TSII.  To my relief (who was wondering?!) he looks great in them.  This is Tissarn's Hack, actually my favorite.
Another calendar-pose, except the sky whited out.  Such lovely legs.
I will end this stretch of indulgence by going back inside, even though such good weather is precious.  This is the hackamore I used for his official Press Release portrait, the one most people would see.  I call it the Kathy's Show Hack.  It was inspired by a full page ad for Kathy's Show Equipment.  I did not know then that split reins are rarely used on bosals.  This piece was made in 1995 and it was the first time I'd managed interweaves on the nose button.  It has remained another of my favorite pieces, even though it's clearly too big for Brasenose. 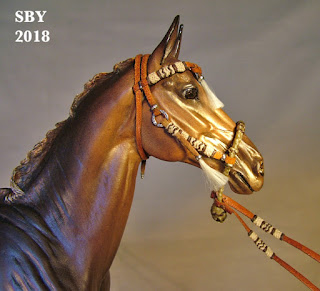 This strange lighting is caused by the fluorescent light-bulb's tendency to throw a tight beam of light, and here he caught it on his muzzle.
He is well named!