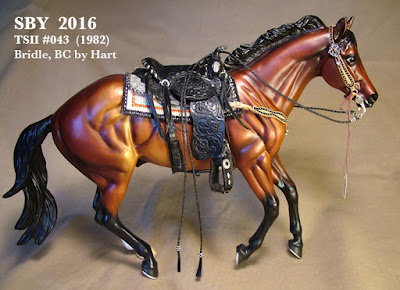 Mid Atlantic Regionals (March 19-20, 2016) saw me sick at home, so it's just as well I couldn't go.  I decided instead to do some serious tack-fiddling-with.  Three whole days of nothing but tack and movies!!  It was heaven, well worth the stuffed nose and high fever.  (I am much better now.)  Two pieces of tack were rebuilt:  a bridle/breastcollar set by D. Hart and an old, I mean REALLY OLD, black saddle, TSII #043.

The story begins with a gift.  Sometimes one's customers are more than just good customers, or even good friends; sometimes they treat you like royalty.  For reasons having to do with a tack deal, a fabulous bridle and breastcollar set came into my hands.  It was a one-ear Western curb in natural with a black stripe, black braided reins with braided buttons and black tassels... and silver microballs set on the black stripe!  The star on the bit, cast plated cheek buckles, matching breastcollar with a star-motif central medallion, and a matching star on the one-ear, made it easy to name.  This was a black-and-white Star Bridle!  It was by Danielle Hart. 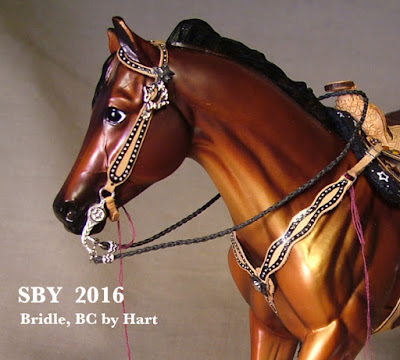 I already had a couple of bridles by this gifted braidwork and design artist, but I told my customer "you can never have enough."  And it's true.  The set suggested, to the giver's coordinating eye, a black-with-stars matching shaped Western Blanket pad, product of Buxton Saddlery.  (Glimpsed in a corner in the above picture.)  I had nothing like that either.  With the arrival of this set, which I decided not to sell, my personal tack collection takes on ever-more the tones of a museum.

Except that it needed work, terribly.
The tiny microballs were not staying on.  They were using too little glue, of too brittle a type, to withstand the bending forces involved when tack is put on and off.  Many had fallen, and more fell when I handled the piece: 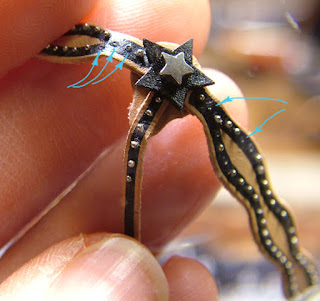 The arrows do not point to all missing mounts, just some of them. 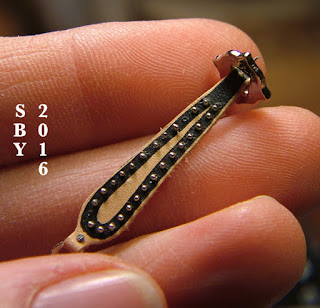 Too fragile...
It came into my head to try and fix the problem.  I had never worked with these little microballs before.  I had them in many different colors...  The giver had gifted me with a bag of extras, which was a dern good thing, because they were larger and less tarnished than my own stock, and matched the Star piece perfectly.  And so I started off.
Trial and error...
I learned to peel off the glue mounts individually, with a knife.  This left little natural-colored patches, which exactly showed me where to locate the 'pits' I would dig, or stab, with my dull awl, when the leather was moistened. 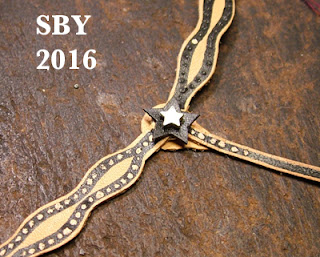 I saw the microballs had been set by eye, not mechanically.  Handmade pieces have that intimate charm.  She must have had great patience to deal with the little creeturs... they escape very easily. 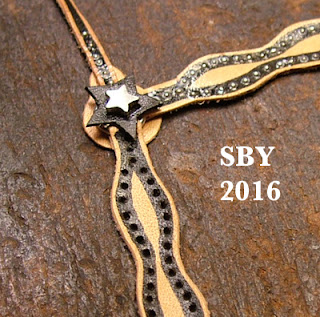 Having made holes, I let them dry, painted them black again (with Edge Coat) and proceeded to set silver dots, about 5 at a time, using SuperShene.  I did begin trying with Fray Chek, but stopped when I realized the Fray Chek was dissolving off the silver.  (!)  These things are made of glass, which explains their beautiful sparkle.
Once the microballs were in place, I squeezed them gently with my needlenose pliers, mashing the glass down into the leather.  I figured the material would expand around them and hold them in place.  And it did.  Next, I painted them with many thin layers of SuperShene... about 4 or 5, gradually building it up.  The leather took on a shine.
This method gave a much better set and, once dry, was pleasingly flexible.  This picture tries to compare the old and new side by side. 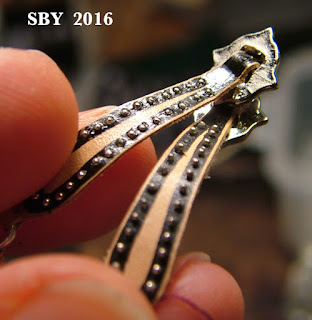 Here's another try at such a shot. 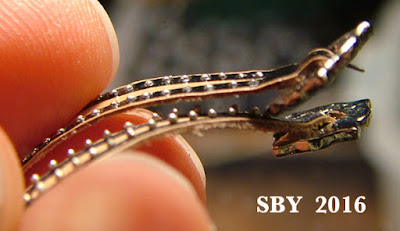 I was cautiously pleased.  SuperShene is not permanent, but it's amoung the better water-base leather coatings, and it has done much good for me.

Now all I had to do was find a black saddle to show it all off with.  To my astonishment, this was easier said than done.  None of my collection of Western Saddles was black... (unless you counted the Kathleen Bond ones, and I wanted more detail than those)... until you got way, wa-a-aaa-y-yy back into the 1980s!!  Then there were two black ones, amoung the oldest of the old.  Only one was fully tooled, and had some silver.  Thinking about it now, I believe that the combination of "black + silver" has been so thoroughly subsumed by Parade Set Fever that it never had a chance to manifest in any other way.  Black is a harsh color.  I shall have to open up my collecting criteria in the future...
I reached up and took down one of my oldest saddles, TSII #043, built in 1982.  (Remember the "0" in front of the number means it was made before 1983, and the saddle is not actually numbered or signed.)  To my horror, the fender swung loose. 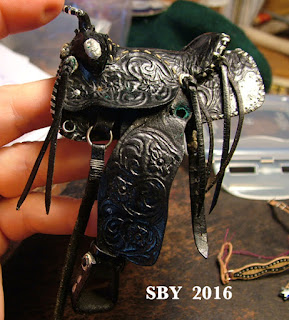 For the first time EVER, a mini-rivet (made of brass, gold-colored) had corroded to the point of nonfunction.  The fender join had parted.  Rivet failure!!!!
Oh, this couldn't be happening!!  I remembered how many saddles (dozens and dozens) I'd made with those rivets, cutting-edge technology in those far-off days.  Tandy's sold those Neat Rivets, absolutely the smallest made, and you set them by hand with a stamp and a hammer.  I was so proud of them.  There were two places of ancient technology on this saddle I'd been extremely proud of at the time, the other being the bellcap conchos.  Right now those conchos were a smear of green corrosion.  I started taking #043 apart. 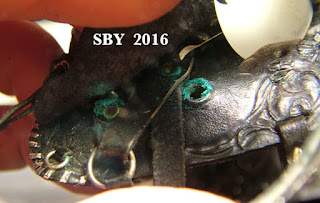 If, like me, you find yourself cleaning off this stuff... the infamous verdigris...  there is no easy way.  It has to be picked off by hand, via Q-tip, paper towel, awl-tip, whatever.  It's waxy and smears something awful.  "Where Q-tips go to die."  Bite the bullet and waste the Q-tips.  Devote several towels to the job, and know that you'll be picking for a long time.
Here's TSII #043 with the "lid off," the seat's rear attachment points removed and the seat flipped forward over the horn: 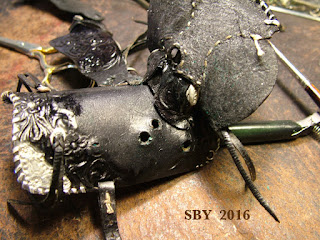 Back then I didn't use a single piece of leather to hold on the cinch rings, like I do today.  Talk about ancient technology!  But the good part was I could start sewing things together as soon as they were clean.  There are some redeeming features to quality material. 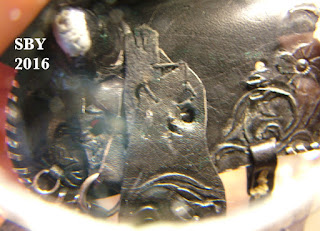 Taking off the old conchos, I broke the saddle strings.  This is almost typical.  The bellcap conchos (on the right below), silver-colored and looking so cool, were merely plated copper... and their holes were too small, stressing the strings.  I made new Aluminum ones, by hand, dimpling them with the dull awl (the same dull awl). 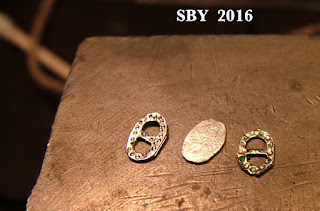 Slowly things came back together again.  I cleaned the white leather conchos with rubbing alcohol.  This stuff helps with the verdigris.  Putting the third-point (seat corner) concho back: 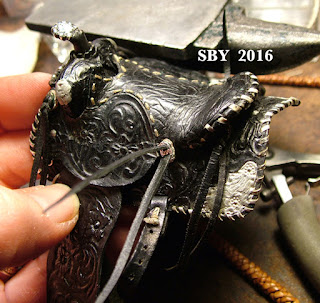 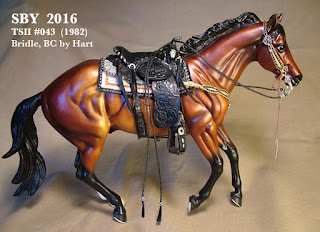 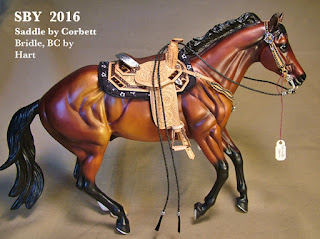 Now you can see the pad.  His mane doesn't want to behave in either case.

So there you have it.  I wanted to play, and these cases came along just when I had the time.  Next time perhaps I will build something... or work on the Guide.  But if anyone is worrying about restorations, rebuilds, replacements and refabrications, maybe this can serve as an example.  Happy Collecting!