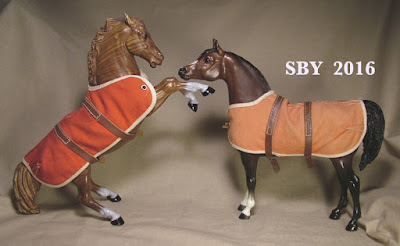 Collecting stable blankets has been so much fun for me I haven't stopped.  Most of them have taken up residence on my horses.  Protecting the horses from dust turns out to be secondary -- we simply have long since passed the stage of everything fitting in the one shoebox.  Even with foals, Classics and Buffaloes, I'm not going to run out of deserving horses...  ...yet.

The title of this post indicates three previous posts or chapters.  I'm a bit ashamed the first one is so hidden; you have to scroll down to the bottom of Three-strands-at-once in order to find it.  The second chapter is much more standard:  My Blanket Collection posted December 2014.  Two months later came the third installment: Blanket Collection Part 3.  Clearly we are off and running on a sustainable path!!  And how much I've learned...

I want to start with Breyer's great Canvas blankets, the first finished blankets ever carried.  (Breyer's felt kits, issued in 1971-1974, were unassembled.)  The initial Canvas offerings were #3915 Blue and #3935 Red, from 1977 through 1979, three years.  In 1980 two new numbers were issued: the Red was given #2380 and a Brown was given #2360.  The Red was carried for one more year, 1981, and then blankets were dropped, until 9 years later.  (One wonders whether they were good sellers.)  However I can attest that while Breyer's Canvas blankets are rare on the secondary market, recently there have been more available.  Thanks to this groundswell of population I have been able to amass all three colors of these grand old pieces, in various conditions! 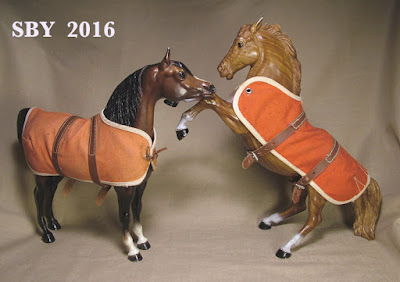 The Canvas blankets were equipped with genuine leather straps, white binding, rump darts and grommets at the chest.  The front lacing, of leather lace, is often missing.  (Or in the case of fitting a Fighting Stallion, missing and won't reach anyway.)  One noticeable feature is the shape of the buckles: some had square roller buckles and others had half-round tongue buckles with no roller. 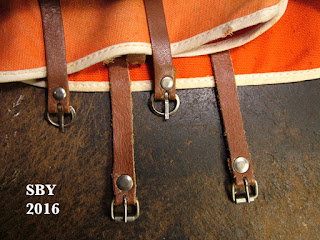 I'm not positive about this, but it stands to reason that the square buckles came first.  One of my Reds has square buckles (on the Woodgrain) and the other has the cheaper, ligher round buckles.  I'm guessing the square buckles, big and strong, with their heavy rollers (easy on the leather) were part of the first wave of blankets, '77-'79.  The lighter, thinner buckles, which cause more scraping wear to the leather, must have come later ('80-'81). In general, this feature of a company's history can be used to help date pieces:  expensive products and parts are often followed, in later years, with cheaper materials.

In my Blanket Collection post I mentioned my Brown Canvas blanket.  Here it is, with a second piece to compare: 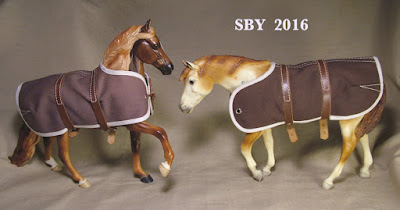 As noted earlier, the long body shape of these blankets went better with popular older molds like the Fighting Stallion, Indian Pony, San Domingo, Trakhener, Hanoverian, Running Mare, Proud Arab Stallion, and Stretch Morgan.  Both these blankets have the half-round buckles, consistent with a 1980 production.  I love how the faded Brown looks just like milk chocolate!

The degree of fading, so noticeable in these shots, has (believe it or not) nothing to do with the blanket's age.  Try exposure to sun over 30 years!  It's sheer coincidence that one of each of my colors of Canvases is faded.

Given that the Brown was produced for only one year (1980), I was a bit surprised at how easy they were to acquire on the secondary market... and how hard it was to find a Blue.  (Maybe people didn't like Brown.)  I was obsessing on Blues.  I had seen several go by on eBay and missed them for one reason or another.  Worse, I had a mystery to solve.  What color were they, really?  Were they a deep dark navy blue, almost black?
Or were they an unbelieveable brilliant sapphire-sky blue?
The Reds and Browns hadn't given me a problem like this!!  And I simply couldn't remember.  You'd think I had a clue with the Blue Turnout Rug... no.  But at last, on January 26, I was able to snag not one but TWO beautiful Blue Canvas Breyer blankets!! 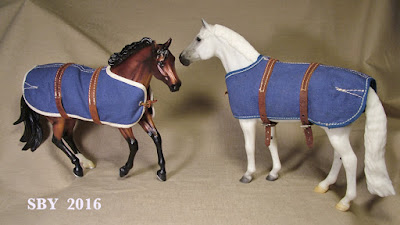 And hey presto, my color mystery was instantly swallowed up in another mystery:  that of the binding.
My eyes popped with the second Blue:  the binding wasn't white at all, but a slightly different blue.  This was a poser!  It wasn't something someone had done after market... it was a true Original Finish.
We know Breyer sometimes substitutes products, releases things not in the catalog, makes changes and alterations and just generally drives collectors crazy trying to figure out what happened.  I could only conclude that this Blue was the earliest of all Canvas blankets, when Breyer was still exploring production options.  They must have tried it out and made enough to sell, but not enough to carry for the full 3 years ('77-'78-'79).  Both these Blues have the square buckles. 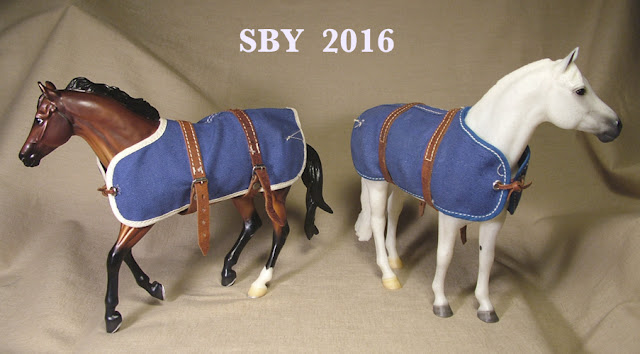 I do like them, even though they are somewhat stiiff and heavy compared to other stable blankets.  The leather lace at the chest is too precious to unfasten or risk losing, so I oiled it and now leave it strictly alone.  Noticeable on the Harley D is that the near grommet has come loose from the fabric, but since I'll not untie the lace, it won't get lost.

Speaking of obsessing on blues, my next catch was of a pair of blue pieces that took my breath away.  One was a third Blue Turnout Rug.  Setting all 3 Turnouts together shows how truly different the colors can be: 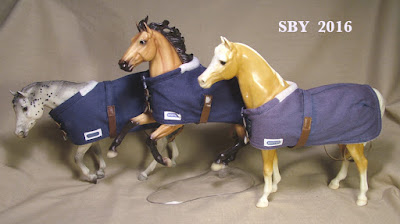 I am convinced the rightmost two (on the palomino & buckskin) are faded and unfaded versions of the 'plastic' leather strap variety of this blanket (model #2806, 2000-2003).  The leftmost (appaloosa) is the 'leather layer' variety, the (presumably earlier) one where a thin grain layer of leather was bonded on top of plastic straps.  I am assuming this transition occurred between the Green Turnout ('95-'99), which has leather straps, and the plastic Blue ('00-'03). 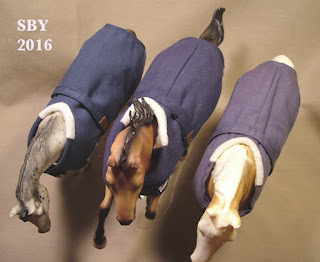 I never used to pay attention to the tags before!
And my second piece?  Of all things, a Breyer Quarter Sheet from 2000-2003!
I had never seen one before, but I fell in love on sight. 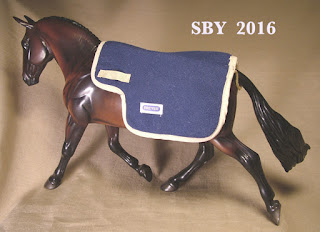 The only other example of a Breyer Quarter Sheet EVER, that I'm aware of, is the one being currently (2016) worn by the Classic American Pharoah.
I had totally not realized how big this piece was.  Even on the biggest Trad I've got, the huge Cleveland Bay, it appears large.  (Probably because I'm not positioning it right -- I'm Western!)  This particular example has a small tail strap snap, almost certainly added by the owner:  it has careful sewing, and one isn't shown in the catalog.  EDITOR'S NOTE:  Later evidence from eBay shows that this strap is in fact Original Finish.  Catalogs ain't perfect!  The underside is a gridded rubbery material. 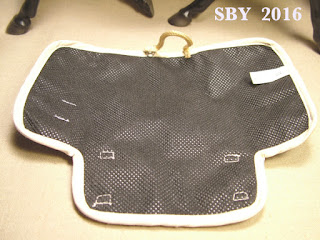 It is very heavy-duty, thick and fuzzy on the outside, and could probably turn rain. 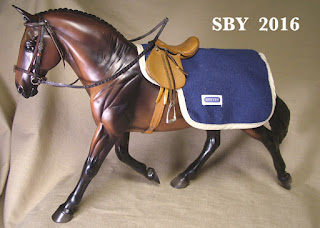 I couldn't resist tacking up Mighty Joe Young with a Kim Cassida saddle.  (Bridle by me.)

We can't leave the blue blanket category without one last example which is now in my hands.  Don't think I have all four colors of Quilted-with-Hoods; I only have the first and last.  Here's their numbers and years:
#2803  2000-2003  Dark navy green with blue binding
#2808  2004-2009  Deep rich purple with black binding
#2040  2010-2014? Turquoise with deep pink binding
#2080  2015-?        Light Blue Plaid with blue binding
It's embarrassing to admit I'm not sure when the turquoise one was discontinued; and even more to admit I don't have solid evidence on the Plaid.  The material matches the Going to the Horse Show set currently (2016) being offered, but this lovely light Quilted Blanket with Hood, with its thin white puffed-plastic lining, is not on Breyer's website at the moment. 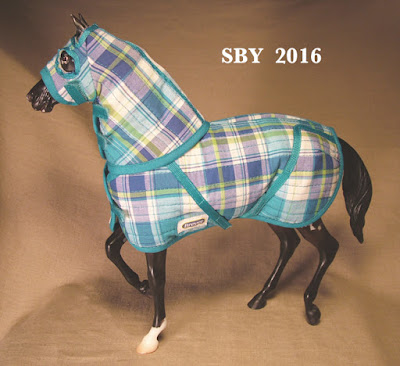 Compared with my oldest Hood, the straps have gotten a little narrower, and the ear opening isn't oval-shaped, but almost pointed at the ends. 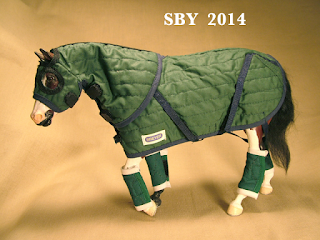 But the straps are shinier, and certainly prettier, so there.
Breyer may have dropped some blankets recently, but they've issued quite a few more.  The most beautiful and collectible without doubt are the Christmas specials.  Naughty Breyer!  As if we didn't have enough already!!  In 2014 came the first of these sets, Vixen and Blixen, on a mare and foal.  These lovely blankets feature metal t-hooks, a high quality hardware, and are fuzzy white inside.  You'd think they'd read my mind! 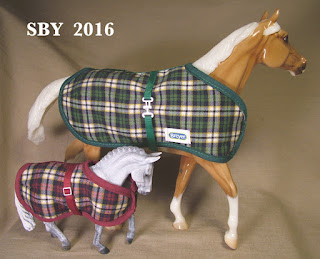 An intriguing aspect here, to me, is that the Breyer tag is on the OFF side of the mare's blanket.  Inexplicable until you recall that the Running Mare's romance side [in the carousel sense: best presentation side] is her off side, while the Running Foal's is his near.  O.K. that's not a Running Foal shown... that's a CollectA Hanoverian stallion (still seeking his own blanket...).  I have to credit these blankets' adjustability: easy and without wrinkling, which is not always the case.
And here is the 2015 Christmas Special blanket, Eve's.  Tiny horseheads!!  Christmas colors!! White and fuzzy on the inside... 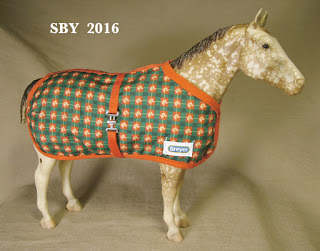 Another case of inexplicably placing the tag on the off side, until you recall that the Nursing Thoroughbred Mare, again, has her romance side on the off.
Because of a set-splitting decision by a seller, I find myself in need of Claus the Foal's blanket, sans foal.  I'm willing to go rather high, so, anybody out there want to deal...??

I have even more blankets after this (!), but I think I'll save them for later.  Thanks for reading,
May your horses be covered in soft fuzzy, warm and clean!