Stringing Along and Concho Villa 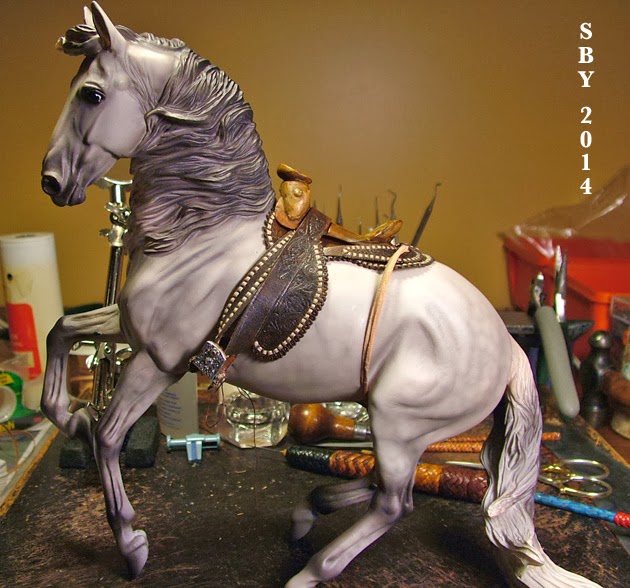 Progress however incremental is still progress, right?!  I thought I'd share a little bit about the saddle strings and conchos, which is where we are right now on this more-than-a-year-long, ever-so-slow saddle project.  Incidentally, that horse is now mine!  I was borrowing him before, but since it was the second time I'd borrowed an Alborozo for a long saddle project (the first was the Domo Vaquera)... and since I've spent so much time staring at him, working with him...  you know, one gets awfully fond of them under such circumstances... well...  I got lucky; she was willing to sell.  Thank you, Helen.  I'm thinking of naming him SnowHammer.  New Yorkers will know why.

To begin with, the strings I'd cut out before January 2 were of the wrong material!  Wanting to depict the texture of deerskin (I'm pretty sure that's what they are), I had thought of using strips of very thin skiver. 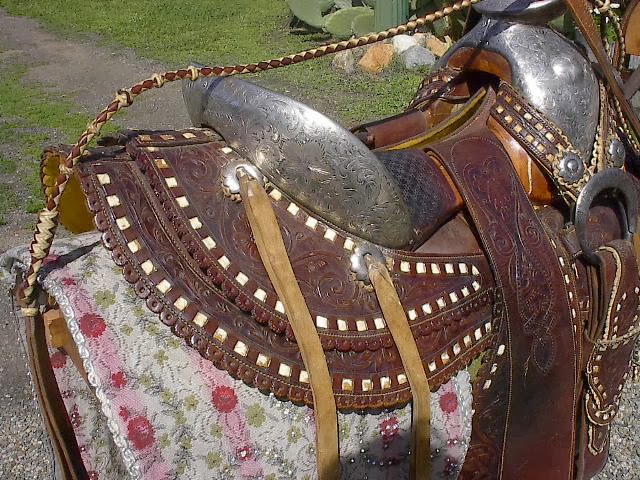 I was very proud of my superthin skiver --it was exactly the right color and would drape perfectly.  Why I was blind to its durability under the stress of construction is one of those embarrassing questions I'd just as soon not answer.  Suffice to say when I started drawing it through the conchos, it tore.  It broke up and ripped every inch.  I had to abandon it. 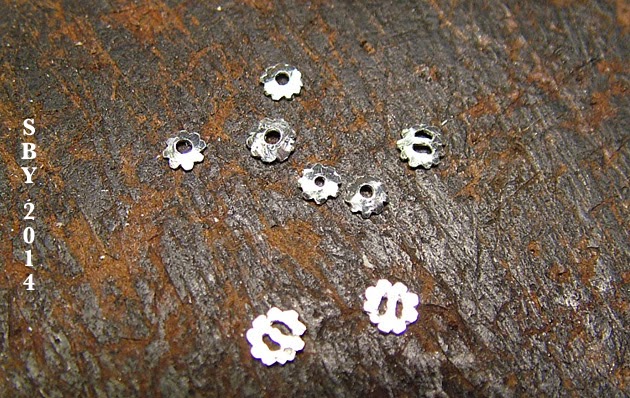 This is a selection of the conchos I will be using.  The ones intended for the back skirts are the ones with a single hole in the center.
And now for adventures in photography of Very Small metal objects.  I wanted to show what I'm doing to refine, even more, these tiny handmade bits of Aluminum.  What is the secret? 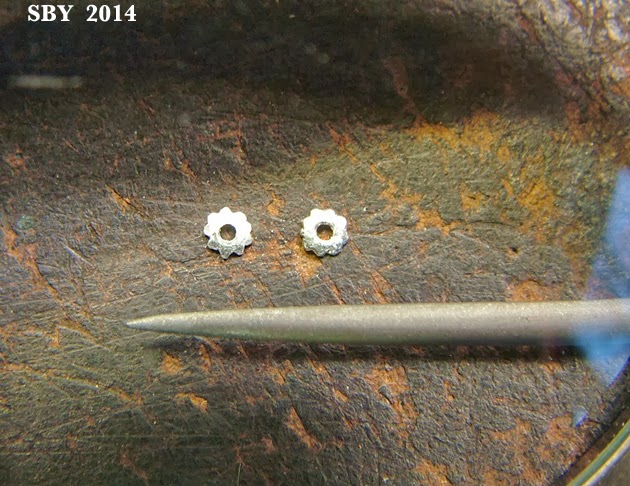 With this first picture (above), several facets become apparent.  You are looking through my magnifying lens.  That long grey thing is my smallest rattail file (yeay Friedrich Dick!).  The concho on the right is the refined one.  I'm chamfering, that is, smoothing and rounding, the inner edge as well as the outer.  But the picture is overexposed. 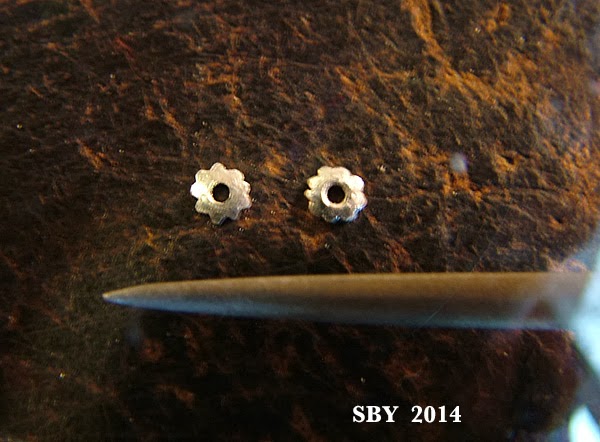 This is a better shot... except it's somewhat out of focus.  No tripod.  But it best shows the refinement. 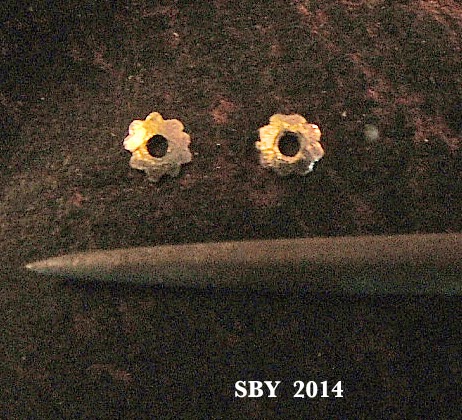 This one was shot manually (no tripod), thus too dark, lightened up with PhotoShop, and zoomed.  It shows the inner chamfering best.  (The graininess of the picture is inevitable.)  I'm using my own fingers as a vise to hold the little things; a glancing pass with the file is about all I can manage.  They're better in person.  These tiny details add up in model tackmaking.
The second time around I thought of chamfering the UNDERSIDE of the inner edge, to make things easier for the lace.
Why is there only one hole, when real life clearly uses slotted conchos?  And I did make some slotted ones... Ahh... you can't know how incredibly difficult they were to make, and how I kept breaking them.  In about seven tries I'd made 3, and I had to give up!  I decided that a single hole would work; otherwise not enough of the 'petals of the flower' would show.  The expansion or squeeze-y capabilities of leather would hold the conchos in place. 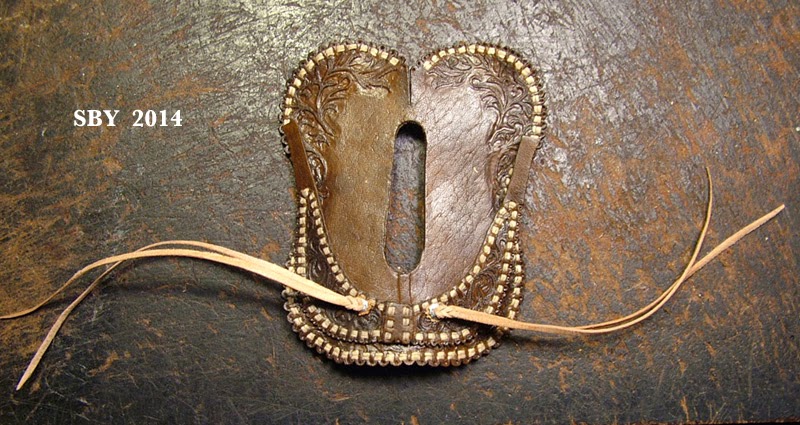 On the face of it, this looks like progress.  I used the before-mentioned skiver to make the leather conchos.  To my amazement they looked right the first time!  once-white scallop edge-lining. 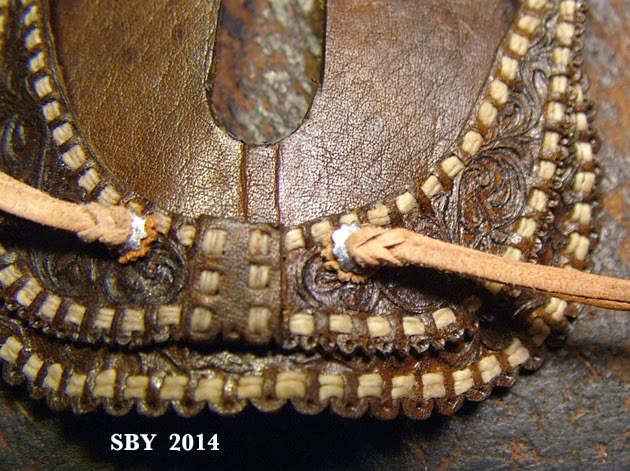 But why on earth wasn't I trying to fit the tree when I put the conchos in place??!! 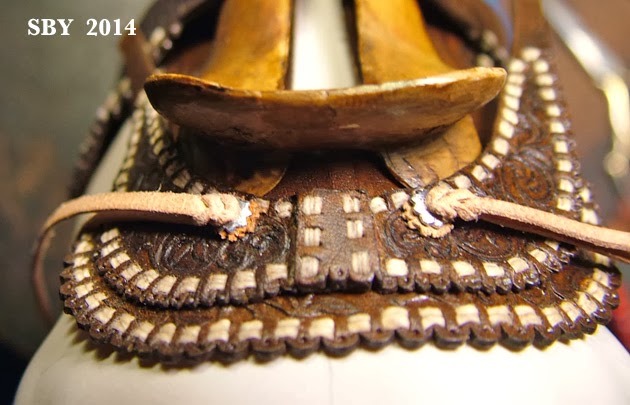 WOOOPS...!!!  The tree doesn't fit between the two skirts...!!  blush...!!  I had had my eye on the reference, which (go and look) showed the conchos "two checkers down from the join!"  Blind again...
Now what?!?  The conchos must embrace the tree and hold the skirts down around it. 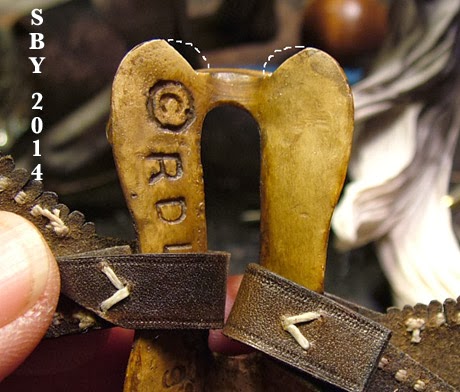 PhotoShop again:  the white dashes show where I've cut and modified the tree.  I also had to move the conchos upwards and cut new slits, ungodly amount of work.  But now it fits.
This shot (above) also shows how I've connected the fender straps.  It's a bit bulky but I felt I had no other choice. 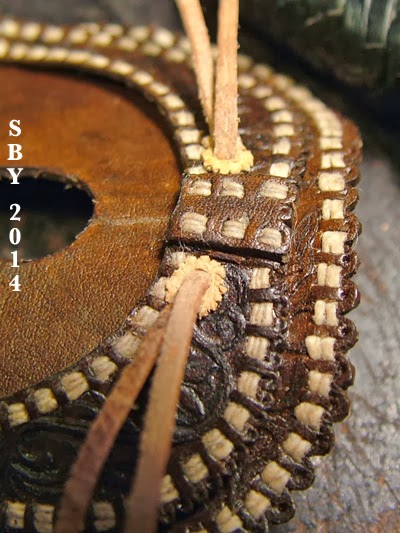 The new strings, kangaroo lace, had their grain cut off.   Contrary to my usual practice, since bevelling helps so much to reduce lace to a good-looking miniature, I'm not bevelling them.  Why?  Because the original real life ones aren't bevelled. They're chunky buckstitching strips, and one reason they look so distinctively primitive is that very square edge... a detail often lost by most folks, even miniaturists.  I've made new leather conchos; the first ones disintegrated when I took them off to move the strings/conchos (the ungodly step).  The metal conchos go on last; I know from bitter experience that one string-half at a time is the only way I'll get them on.  Lick, slick, and slowly gently ease them on and pray you don't break them... it's like trying to squeeze a camel through a pinhole... 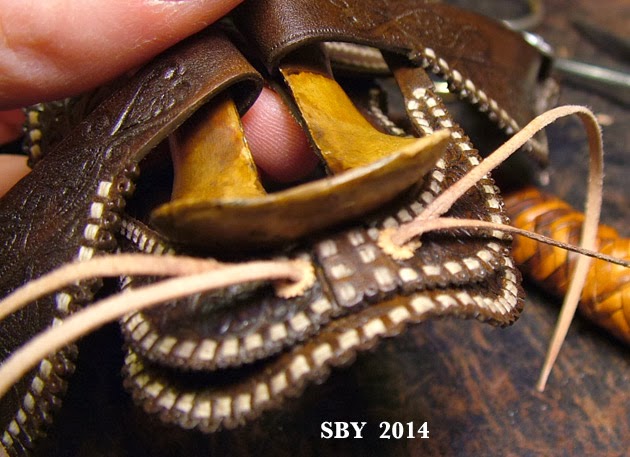 Got em on!
This time the tree fits!! 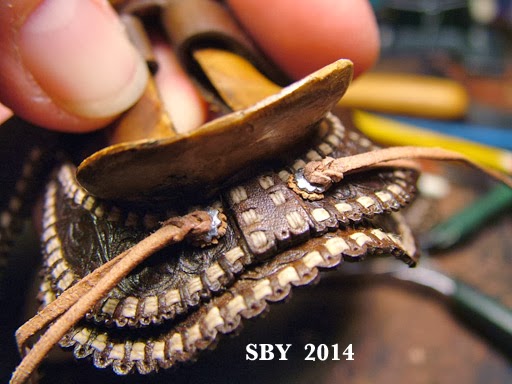 The incredible adventures those laces have gone through (being pulled through weensy conchos twice now, waxed, licked and scraped -- I foolishly don't have my Dr Jackson's, Super 7 or any other kind of leather dressing with me this week) have made them thinner, flatter and a good bit more like what I aimed for.  I didn't plan on that, but sometimes you get lucky. 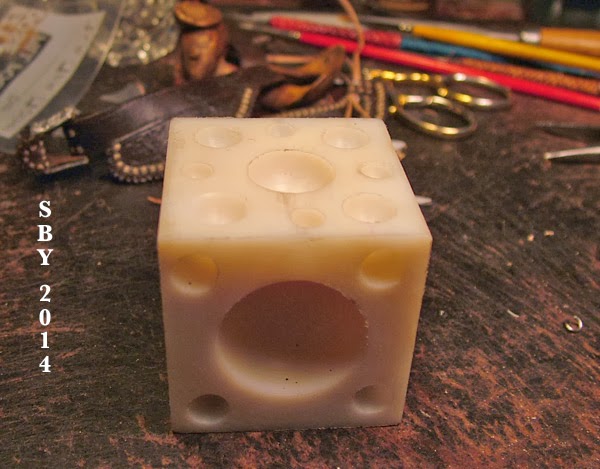 In the course of the move to NY and this saddle, I wanted to bring my dapping block, but didn't want to drag a chunk of metal weighing several pounds.  Happily I remembered this little plastic one.  I'm dreadfully sorry I don't remember where I got it --!!  Tandy's?  The Gem Show?  Worse, I probably got it as a gift and then never gave it...  errr...  tomorrow...  It is much too handy as a travelling block.  I need it to dome the conchos, and maybe for some of the silverwork still to come. 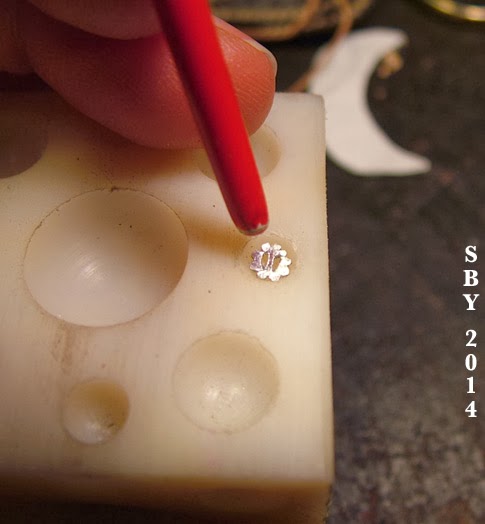 Dapping is the act of doming, or curving to the segment of a circle, a portion of flat metal.  Usually you need special tools, which look like balls on sticks.  But at our miniature scale, the tip of a paintbruch handle will do. 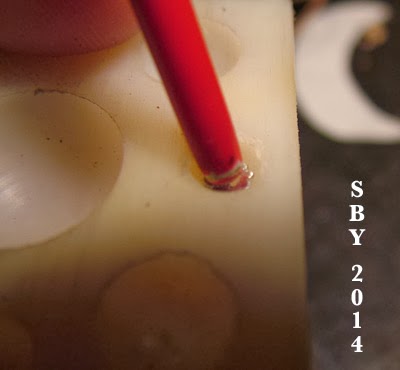 Also, one usually uses a hammer to dap.  But again, at this scale, simple wrist pressure does the job.
I'm aware that this is a rather unsatisfactory picture to end on, so I'm going to be daring and include another. 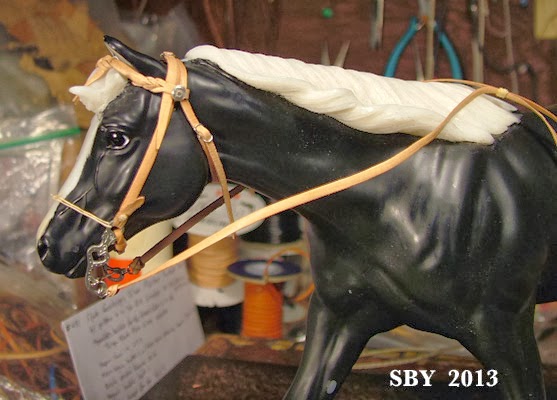 Remember I said I finally owned the Alborozo?  Part of that deal was a tack trade... this bridle.  It is the last piece of tack I made in 2013.  May it be a good omen for the next year.
(Charcoal etch job by yours truly.)
Posted by timaru star ii at 7:46:00 PM