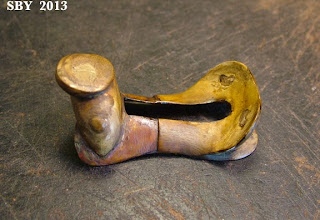 All good things come to those who wait.  And wait we have!  Worth it: the past 3 weeks have seen fruit.  The Goehring tree is finished, and so is its seat leather and both skirts.  There is a use, after all, for a rented house and a field experiment.  (See our other blog, ship chandler.)

I can't thank Ann Bilon enough for her kindness in sending me the Apoxie I used to customize this tree (thank you Ann!).  I had so much fun sculpting and sanding and filing.  But it wasn't until I dyed the thing that I really began to feel like progress was being made.  More than that... I could actually see, for the first time in a year (this saddle was started in January), light at the end of the tunnel!! 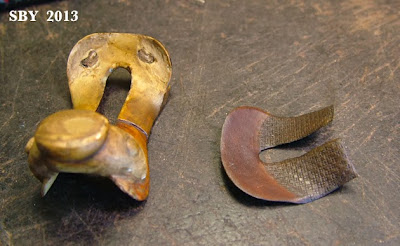 I had never colored resin before.  A painter I am not...  but I've been dyeing and staining since the beginning of my tackmaking career.  It was the most natural thing in the world to pick up a brush and dye.  "A good day to dye" embraces the very dry weather we'd been having up in the Finger Lakes area of New York.  Things crackle!  I swear, mold and rot have no chance up there -- you are dry the moment you step out of the shower.  :)

I used plain Dark Brown Pro Dye for most of the tree.  For the wood parts, that is, for those parts which would show in the finished saddle - the bottom of the horn and the bars under the fenders --  I used my Fiebing's British Tan oil dye.  So much fuss about trying to get mineral spirits up to the house so I could clean the brush. --!!   They never did get up and so I wound up using a Q-tip.  Just today, the day we moved back to State College for the two week Christmas break, the oil dye leaked in transport.  Fuss--!!!  You'd think I'd've learned the lesson:  not to transport dye that isn't in a Nalgene bottle...  sigh...
The oil dye gives the lovely reddish cast of mellow wood. 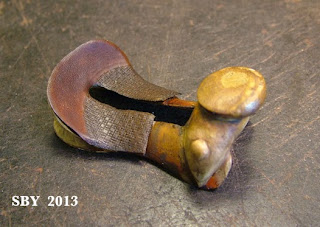 The seat leather piece, seen here merely laid in place (installation must come after the cantle silver), also used the oil dye.  This seat is a model tack situation where I departed from depicting reality.  In reality there is no leather on the rear of the seat.  Bare wood is all that shows.  (Comment out of context: hard ass.)  But in model, I had those little holes to cover up.  Through no fault of Jennifer's (who sculpted this tree), I didn't want those holes.  Most Mexican saddles have them, but not the Goehring.
So I chose to depict the entire seat in leather, and actually this was an easy choice to make, since most of my Western saddles have one-piece seats.  I had lots of experience, and comfort, with such a choice.  A good deal of tackmaking is just such decisions.

The Goehring seat uses a basketweave design of every other square cut foursquare.  No stamp exists for such a design, at least not in miniature!  I could've made one, I suppose, from a minute little Phillips screwdriver.  Instead I just used my needle chisels.  A lot of steady hand cutwork, no more, no less.

Next came the skirts.  No matter how carefully I'd planned, I wasn't going to do soldering in somebody else's fancy resort house, and that meant I couldn't do the main cinch rings next.  Nor could I do the conchos, having not brought ALL the supplies or stamps I'd need.  (Incidentally one I thought I'd lost was later found, brought along after all!  All good things...)  But I HAD brought plenty of leather and my 5-pound tooling block, a gift from Kathleen Bond. 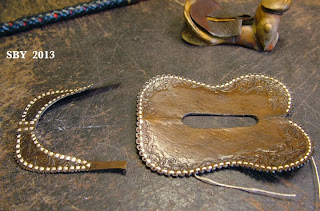 In my original estimate of parts to be made, I had listed the two skirts as two separate steps.  I would have done better to have listed three steps for the two of them:  Tooling/Scalloping, Dyeing/Finishing, and Checkering.  By checkering I mean buckstitching with white.  I'd had the patterns from an early stage, months ago.  What remained was refining of the tooling patterns, and then we could really start.
Here's a quote from my N.A. (tackbench) notebook:
"I want to explain why the 2 skirts' patterns don't match. (Nor the fenders.)  This saddle represents 2013 to me, a very disjointed year.  Although each separate section is good, each had to start from scratch and was isolated.  Also my reference does NOT show the tooling pattern very well.  ALSO, for the front corners, SVEN'S ANTLERS from the movie FROZEN are influencing me.  He's carrying European Red Deer antlers even tho he's a North American caribou.  Such fantasticalness is typical of this saddle." 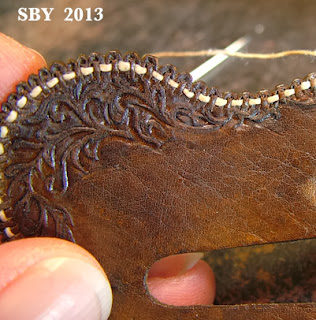 In another typical move, I didn't really allow enough space for the scallops along the edge.  I had to cut them after tooling, even after dyeing, which just made more work for the tackmaker.  All went well with that mindless job, except that now there wasn't enough space for the checkering.  The above shows the first pass of the thread.  Remember how the fenders used three passes?  When this pic was taken I'd finished the second skirt with three threads on one side and only two on the other.  This was made possible by finding a thick, fat thread.  It worked so well.  If I'd found it earlier I would've used it for all of the second skirt, which was thinner and more delicate than the base plate/first skirt.  Why hadn't I found this earlier? -- model tack is full of such twists and turns.

So, how can I fix the problem of no space?  It isn't the common stuff you want to learn from the masters of a craft:  it's how they solve their own mistakes. 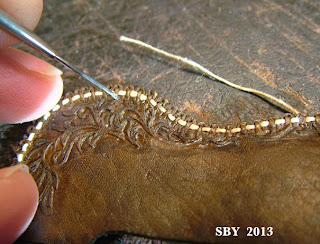 "What does the Master do when things REALLY get tough?" is one of my favorite quotes.  In this case the only choice is to extend the cut slits inboard, into the tooling.  How I managed not to cut the existing white thread is a mystery.  I decided later that the waxing of the linen thread made it into a substance that could easily stand nicks and small cuts. 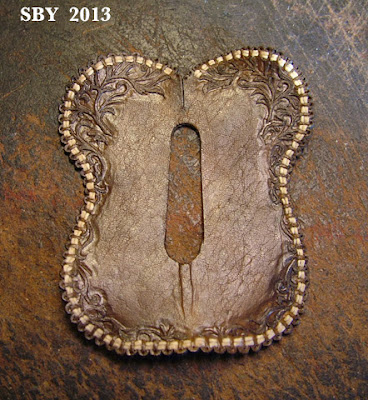 Two threads all the way around.  Flattening the checkering, with the needlenose pliers, proved excellent.
And now came a chance I found irresistable.  It was surprisingly difficult to hold all the parts together with only one hand. 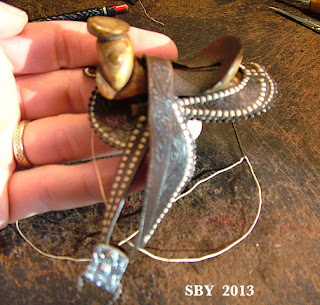 A glimpse, out of focus and incomplete, of the almost-despaired-of!!  Impossible as it seems.... 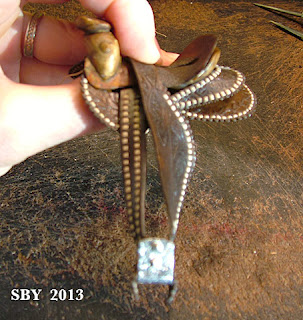 Can it be!  Oh, ah, some day soon...  Not years now, not months, but mere weeks... could be even days.  We still have the silver to go, seveal large pieces of it... the cinch rings, the cinch straps and the cinch itself, not to mention the blankets.  But in the outer universe the situation is stable.  And for that I am deeply thankful.
Merry Christmas all.