Silver Progress on the Goehring 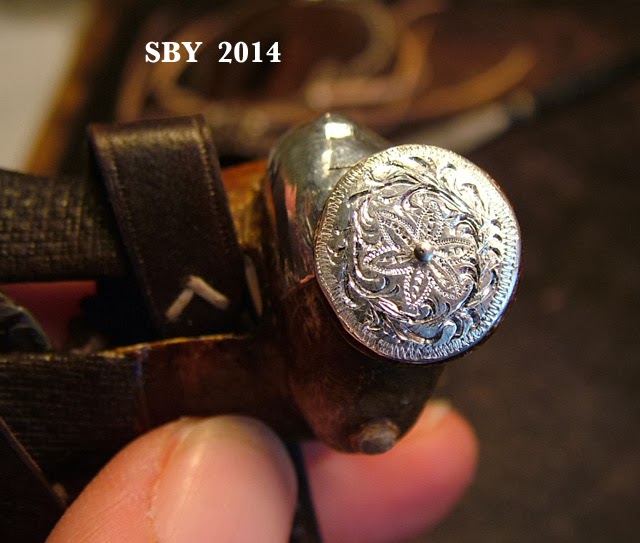 A great deal of progess has occurred on the Clyde Geohring saddle, mostly of the silver persuasion!  And what a relief that is...  Start with the horn cap.  I apologize for taking pictures so late in the game; this is the only one of the horn cap by itself, and clearly it's upon completion!  Like the breastcollar conchos, this piece is of solid sterling silver, and was engraved all by hand.  Unlike those conchos, this is the first (and nearly last) time on the whole saddle when markings are placed inside the petals of the central flower.  There was space.
The horn cap is affixed with a pin (cut short) driven through the middle and into the resin tree, as well as being glued with Ambroid.
What you can't see here is the incredibly long time it took to fit this disc of metal to the non-flat surface of the horn. 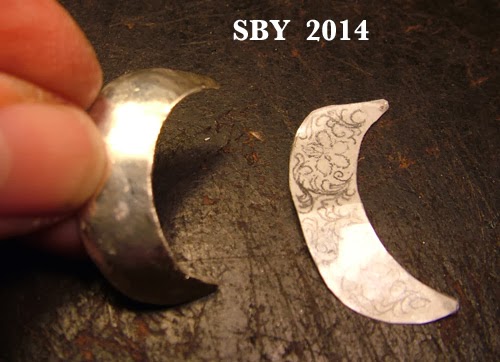 Next is the cantle plate.  I had had the paper pattern for some time.  Again this pic is late in the game; the blank is already cut out and starting to be bent and fitted.  It's a complex curve, the most difficult of all to fit. 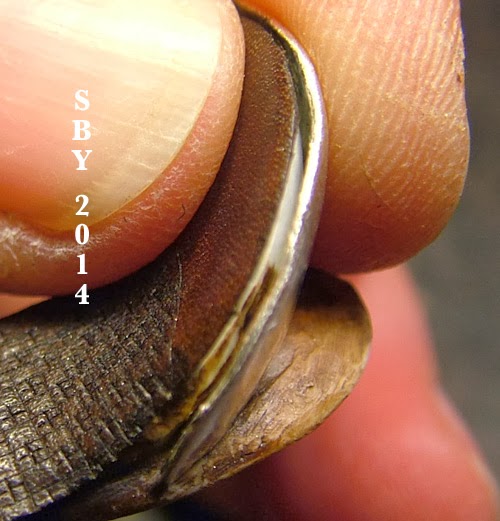 A familiar sight:  it doesn't match!!  How hard, how hard to gently tease and work and bend and twist a  very heavy piece of metal so that it fitted snugly to the tree.  I was filing down the tree too.  Hammering, tapping, using the dappling block, everything I know and all my patience, and even then it makes your hair turn gray how long it takes. 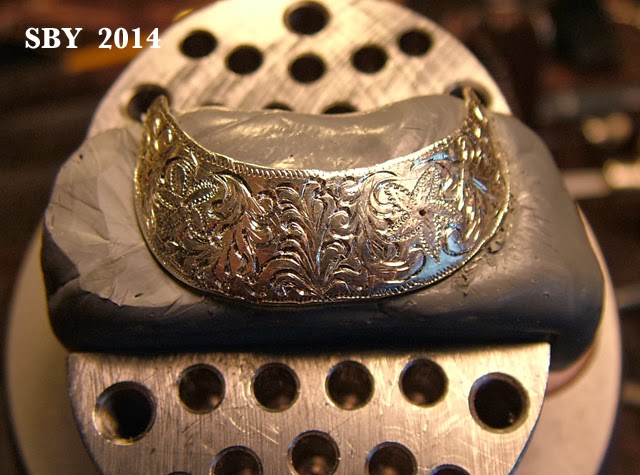 Initially I tried to secure this huge chunk of silver, the single largest piece I've ever made yet for a model saddle, to the vise with its pegs.  Didn't work.  I had to melt all my Thermo-Loc and make a big old block instead.  Even with this it managed to unset itself twice during engraving.
Again, what you can't see is how difficult engraving a convex surface was.  Whether I'd lost my touch, whether my gravers were dull, or whether it was that outward-curved surface, it took me 3 days to do this. 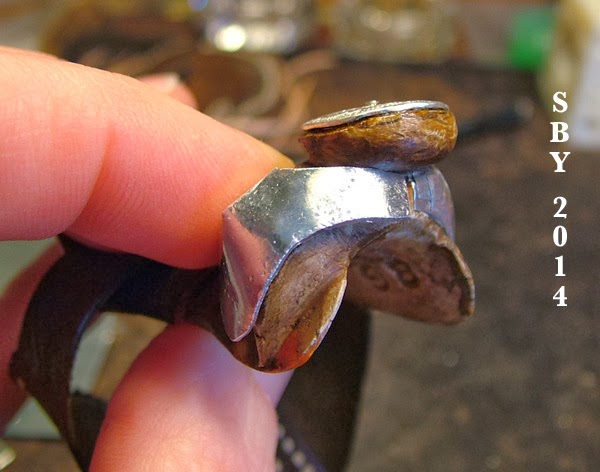 I didn't have enough silver for the pommel, something I'd known from the beginning.  What I was aiming for originally was heavy-ga. aluminum [AL].  What you see here is my first try.  That stuff was as solid as concrete to work with at this scale. 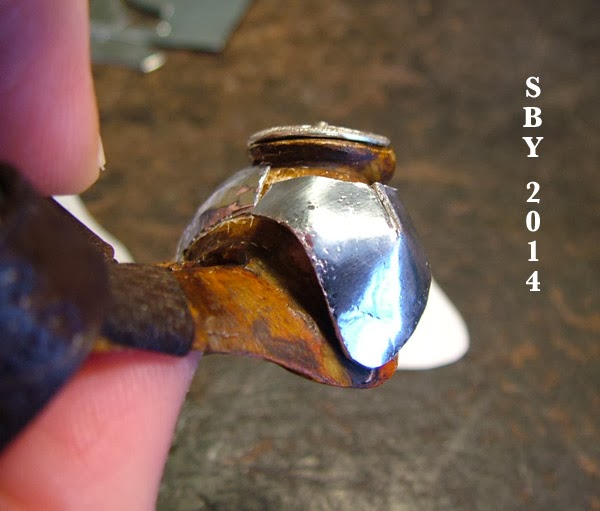 It may look O.K., but trust me, it wasn't.  I had no way to curve it further, handle it or work with it, and I couldn't close the gap of the dart.  I was completely unable to achieve the little 'bump' of the shoulders, so carefully sculpted and filed on the resin tree.  How to solve the intractability of the situation: super-heavy, unbending materials, yet poor access with limited lightweight tools?

With old technology, that's how. 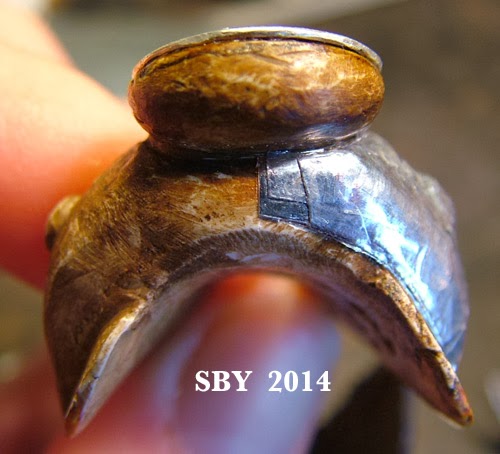 Some folks might say I was cheating.  What, not solid silver or Argentium or even solid AL??  After all the rest of this saddle -- !!!
But remember the TSII tagline:  Anything goes if it looks right.  Using multiple layers of very thin AL sheet molded to the surface, allowed me the access and control I needed, and saved, used, enhanced!, those little bumps.  It retained all the work that went into them, instead of requiring that work to be done all over again.  I had extensive experience with the stuff [silver tape] and just because it hadn't performed perfectly in all the applications we greedily expected it to (it broke, it fell off) didn't mean there wasn't a place where it shone.  If there was one perfect application, this was it:  resin pommels.  "Every hoss has jus' one race in dem, honey, jus' one."  (from The Phantom Filly by George Agnew Chamberlain, 1942.)  The place where silver tape did NOT fall off was where the foundation was NOT leather (no oxygen exhange!), where things did NOT flex whatsoever, and where the tape was held down by something else.  In this case that would be the girth straps.  So I plastered several layers on, squeezing out the air and darting them to fit the curve, cutting as I went.  As the patterns show, each layer got bigger, since it had to cover more.  I couldn't tell you how I did the darting (wrinkles); each layer dictated its own, and I cut their edges with the X-Acto and smoothed everything down with the fid. 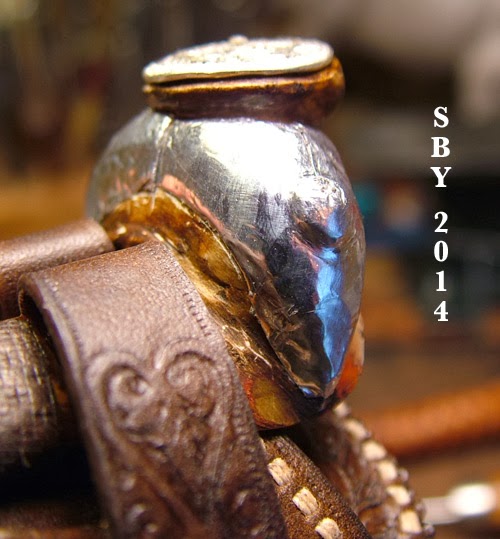 The original reference showed the pommel silver in two halves, so that's how it went.  I would pin it later, as a backup hold-down.  This application was the first time I'd put more than 2 layers down... ultimately I used 4. 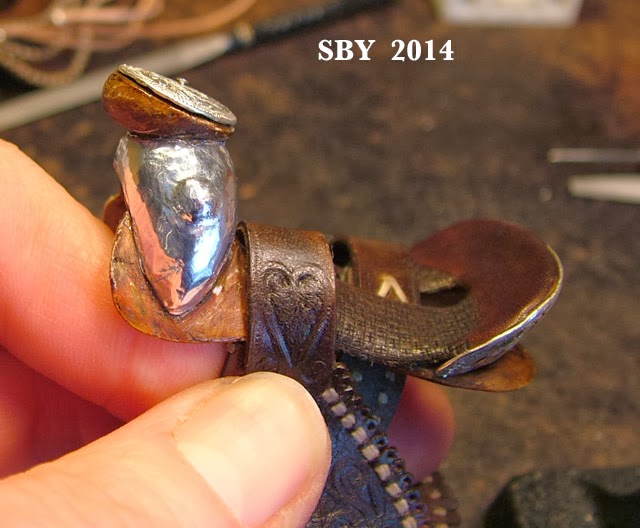 And like an idiot, long ago I'd put the fenders on.  A mistake, I'm telling you. 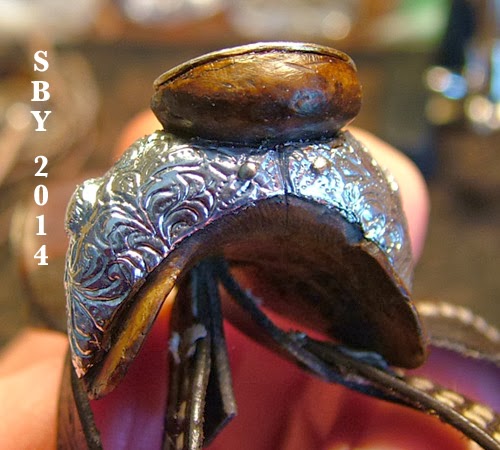 Here is the front of the pommel silver, after engraving and pinning.  Although this material can't take engraving the same way as solid silver, one can still gain a respectable facsimile with a dull and sharp awl.  Take care! it is, in every way, a one-time-only material.  If I'd drawn wrong it would've been back to putting on a complete 'nother shoulder.
The pins had to have holes drilled for them, and that was a challenge, because of the adhesive gumming up the drill bit!!  Eventually I got past it... 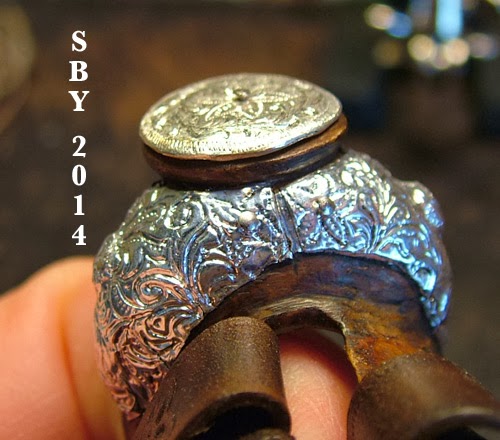 Only now, after it's way too late to do anything about it, do I see that the rear view of the pommel silver shows a profound asymmetry on the tree.  That's what you get making miniatures by hand and eye.  Hopefully the seat and cinch straps will disguise it. 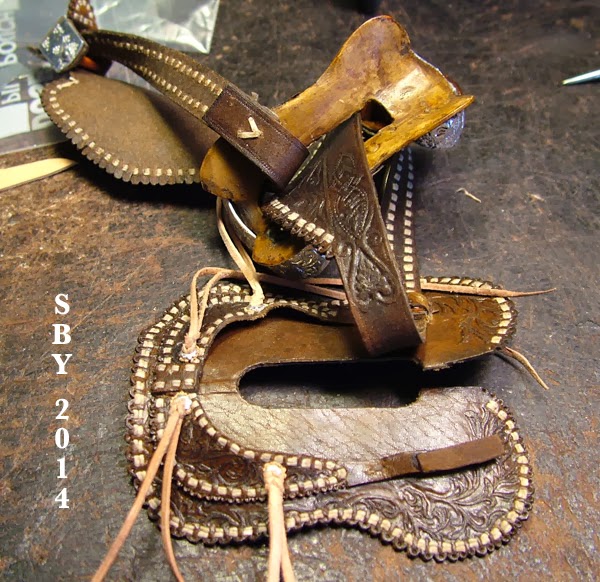 What's this?!!  I'm sick and tired of the skirts not being attached.  I had no real idea how to assemble this saddle until now -- believe it or not!!  Model engineering is often made up on the spot -- that's the fun of it...  Easy enough to tuck the tails of the tree into their pockets (between the skirts and conchos).  Almost impossible figuring out how to fasten the front down.  There's no skirt or flap to hold down the tree.  In the end I nailed it underneath. 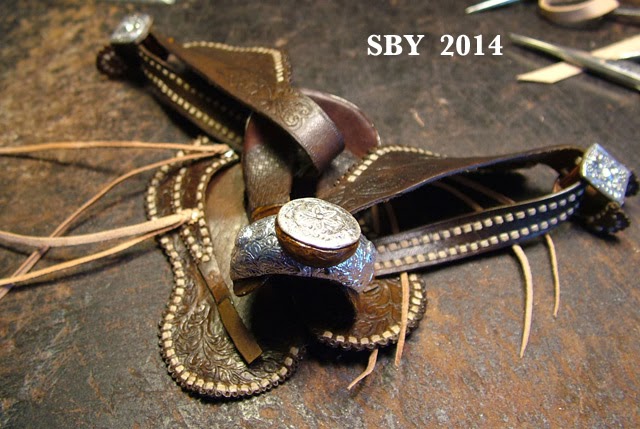 This is slightly more recognizable.  The forward ends of the second skirts will be sewn over the fender straps (but only the insides).  I had to extend them twice.  Who says the master knows what they're doing... 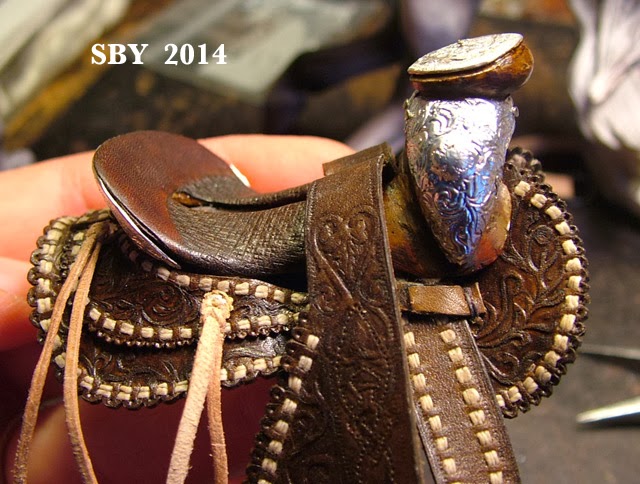 This shows how the second skirt finally wound up.  Shaping those fenders is going to take a lot of patience, water, you-name-it!  They don't want to stay down... 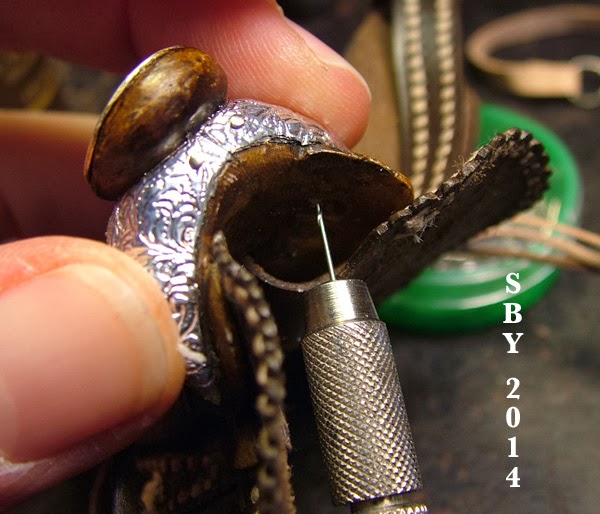 Using the Pin Vise to drill a hole into the tree.  I've already holed the base plate/bottom skirt. 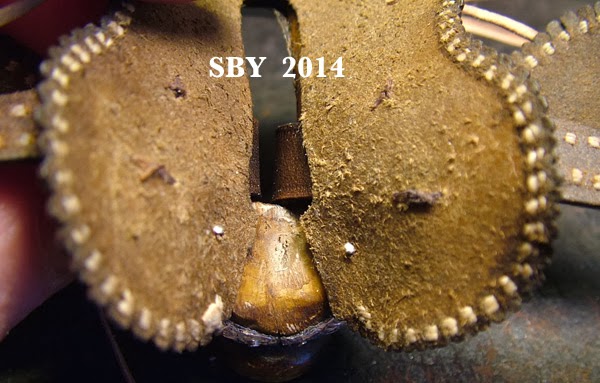 Oh I am really hoping it won't gouge the horse!!  I can't squeeze the pins in with pliers -- that would be to damage the pommel silver.  I can only press on these pins from one side, and push them inwards with my arm's strength.  Eh, there's always a blanket...

The reward.
Now at last I can start work on the cinch rings and straps.