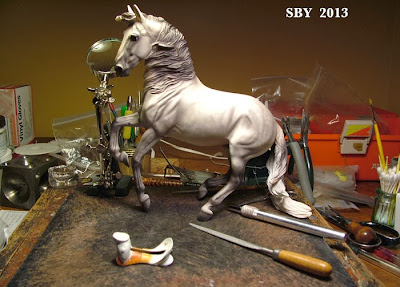 This is one of those posts that tries to catch up with several subjects: a new location, new material and, not least, making progress when one is completely stuck on a tack project.  As such, I'm afraid it's rather a work-in-progress.  From author Suzannah Lessard comes a word I've used before:  midmetamorphosis.

Where to start!  I just uploaded a whole post on our new digs: Bay To Remember.  It's kind of long, so I'll put in three pix here that take you around the corner of our rented-for-two-months house, and over to the latest incarnation of the TSII. 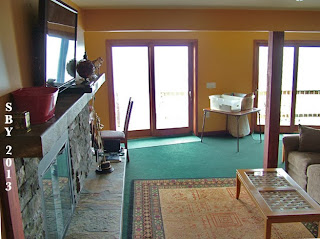 This is what you see when you go downstairs. 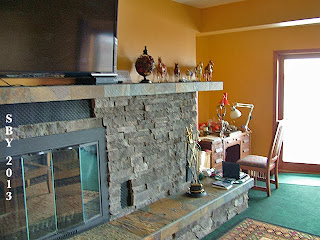 And this is what you see if you keep walking towards the door. 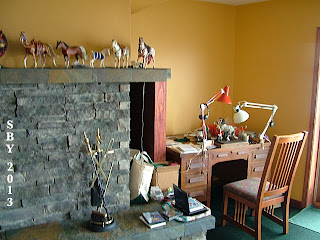 And here is my tack shop.  I brought in the lamps, horses, tools and materials and tack, and the electronic stuff.  (I can't make tack without music, at least for more than a day.)  The desk and chair were already here.  The moment I saw it I knew this was the spot to set up.  Old work desks have a special attraction.  Could it be because Dad used one in our garage? 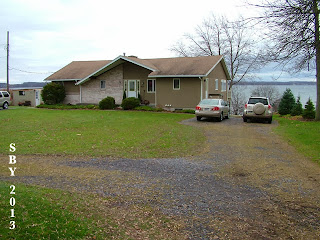 And this is the house, just to give a little perspective.

The TSII has set up shop in a multitude of places.  As time has gone on, I've become increasingly proud of the collection of locations I have made tack in.  It started on a card table in my bedroom at home, that is, Fox Hills in Boulder.  It went out to the family basement room on the picnic table, then out into the yard (in summer).  It went to college, CSU in Fort Collins, CO, and happened in several dorm rooms.  It went to the apartments I lived in, and then the houses.  I got an old bin door for a worksurface and leaned boards against walls for tack racks.  When I travelled, I used an orange fishing-tackle box... now famous in its own right!  Over the past 33 years, I've made tack in tents, airplanes, cars, ships and hotels.  I guess this is a miniature list of how travelled I am as a person.

Travel is not always fun, and this year has been particularly difficult.  Although its difficulty is a separate subject, still it bears on my next topic, which is breaking logjams!  You will know that I've been having a heck of a time working on, let alone finishing, the Clyde Goehring Mexican Parade Saddle set.  I started it in January.  Twelve months later, we are finally up to the tree.  Oh, the breastcollar and bridle are done: 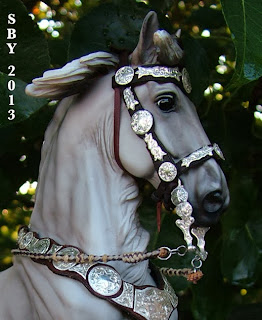 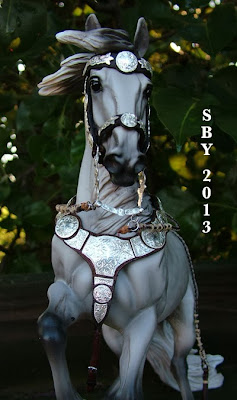 But moving beyond this point has proven almost impossible.
Aside from the obvious, that we've been involved in "family issues," has there been any other contribution to the recalcitrance?
Yes.  This is a saddle of a type I'm not at all familiar with.  I didn't have reference, and worse, I didn't have any identification with it... not the way I identify with Western saddles.  Even English saddles I am at least quite familiar with, and have collected for years in model, even making a couple.  It is a law of miniatures that the more ground-breaking, prototypical work involved, the slower you go.  My first McClellan, Portuguese, Spanish and Peruvian sets all took inordinate amounts of time.
But wait, there's more.  This saddle absolutely involved a tree... no way without it!... and I've been awful slow to use trees in my model tack. 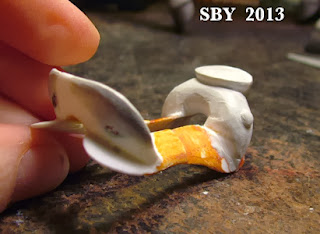 As noted before, when I discovered TWMHC's resincast Mexican Tree, I knew I had been saved.  Ordering it took time.  Once I got it, I had the further problem that it did not match the saddle I was trying to build.  I needed to choose between going ahead without customization, or doing the deep thing, totally hand-crafting a one-of-a-kind tree with it.  Being the TSII, I chose the latter... eventually.

Time now to mention Ann Bilon.  A hundred thanks would barely be enough!  This lady, ever honored be her name, went out of her way to send me a package of Apoxie... and other aids to specifically get me going on this beast of a project.  I have sculpted very rarely, and not in Apoxie before.  Reading the label, I realized I had to buy disposable gloves to use it.  One more step, one more day...  Step by step, sometimes no more than just sitting at the bench and scraping off the oil dye I'd originally put on the tree, I slowly progressed, while the days went by. 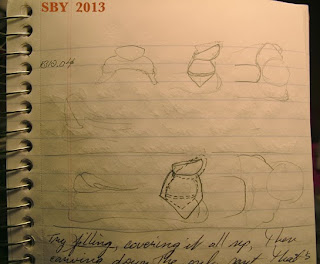 One of those days was spent doing drawings.  The horn of the TWMHC tree canted steeply upwards, whereas the Goehring horn was more level.  It was higher too.  I had to make these drawings to see just what I was trying to accomplish.


On another day (yesterday?) I went online and studied, ever deeper (it is well worth the visit!) Nohuanda's fabulous collection of pictures of Mexican Saddles.
Nohuanda's Monturas Mexicanas.
Nearly five hundred shots of every concievable part!!  Priceless!!! 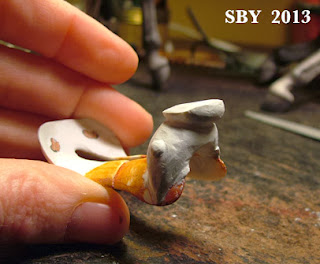 Friday was the day of Apoxie.
I opened, rolled, squished and shaped.  I molded and sculpted.  After so long in my hobby, I was doing what everybody else did, what I had seen the results of so often: sculpting.  And -- believe it or not -- it was fun!
I could get into this.

After the Apoxie cured, I filed and filed and filed.  That was this morning.  The X-Acto cuts it beautifully, and my trusty old fingernail file (actually a metal file with a wooden handle) worked like a charm.  Layer after layer, I got closer to where I wanted.  It was a case of creating what I was after in the moment of creation. 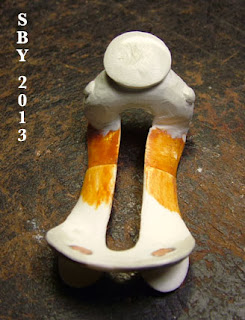 Even the bumps on the shoulders are here.  How I'll fit silver around them is a problem for the future.
Silver bumps are exceedingly rare in Mexican saddle pommels; I haven't seen any in all the 499 pictures of Nohuanda.  I did make a pattern for the cantle silver. 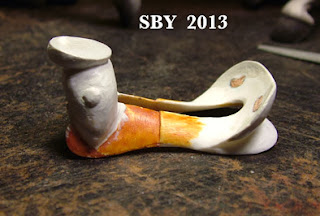 A lot of white dust and little grey and white chips.  The pictures barely show the crescent of the old, original white-resin horn poking up through the Apoxie, as the drawings suggested it would.  I had to take off nearly as much as I'd put on, but I think that's par for the course. 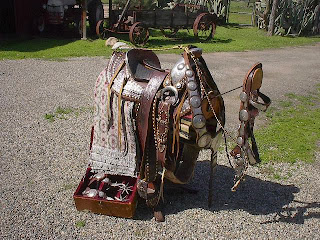 This, of course, is the Goehring set.  I still don't know when I'll be finished.  There are a lot of things I don't know:  when I'll ever get to my Christmas letters for instance!  No gift list exists, nor is likely to until next year...  Can we have Christmas in June... ?? ...  But I do know that I'm going to keep trying.  Long-term success is linked ever closer to finishing this saddle and to finishing Rinker.  Until then, thank you for your patience.