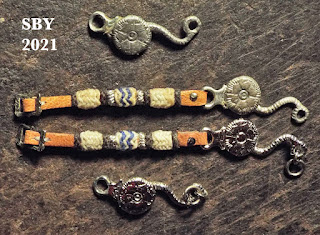 It feels like a very tricky thing:  capturing in a photograph the difference between the old and the new braided buttons on this restoration job.  The Nickel-plated bits, to be sure, are obvious.  I took this tack order on so lightly, sure I could simply slip off the old buttons and slip them back onto new lace.  Not so fast!!  The old sealant to those buttons -- and we're talking old here:  TSII #413 was built in 1999, twenty-two years ago -- had turned yellow and dull.  I've discovered I can't exactly get the sealant off, which is discouraging.  The differences are noticeable in person.  But my beloved camera has a tendency to turn everything yellow,... incandescent light or not.  It's taken some work and PhotoShopping to get the above picture of the cheekstraps of the bridle of 413. 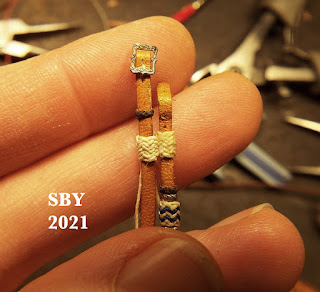 Look at these top buttons (above).  Can you tell the old one is on the right, and the new on the left?  These are 7P5B braided buttons, done with (right) heavy white cotton thread, and (left) white linen thread.  The right, old one is slightly darker and yellower, with less distinct braiding.  The old sealant did that:  almost fused the threads together.  How was I to know that RC56 glue would do this across twenty years...  Sometimes it is discouraging to meet up with old pieces of one's work.

And sometimes it is rewarding and fun.  I am choosing a mix of true conservation of this tack --  recycling the dark small buttons, Spanish Ring Knots of 3P, as well as the crimps -- and of rebraiding.  Everything that was white is, so far, being rebraided.  Because it is a pleasure to be braiding again, I am indulging myself (in between bouts of mule harnessmaking).   I don't think I've braided much during the entire pandemic, something I'm blaming on Akhal Tekes.  :)

Below is a close-up of the new ear piece (left) and the old cheekstrap (right).   Merely taking off the crimp beads results in destroying the old leather.  Age and dryness has reduced it to a friable state, and it was time to replace it with fresh new kangaroo lace. 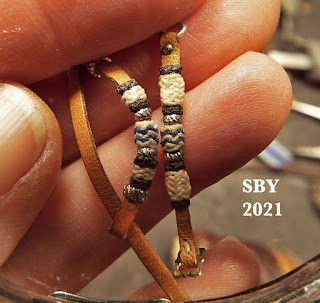 I don't have much of an idea right now how I'm going to handle the saddle, TSII #413.  My options range from doing nothing at all to complete disassembly and rebraiding.   That's kind of a tall order.  I'm rather glad the mules are waiting in the wings; when I get stuck, it's back to them. ...

until I get stuck again.