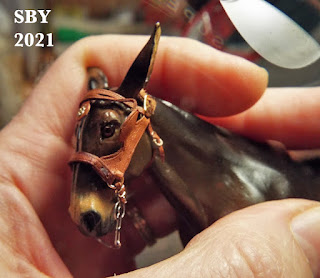 For two months, from July to August, I was working on these bridles.  To be sure, the time spent on them was mostly one day a week - Friday! -- with, usually, one hour on one other day in the week.  So progress was seriously slow.  Still, bit by bit, I managed to solve most of their problems.  I hadn't worked in this scale for a decade (2010's Pebbles Fine Harness).

Creation began with the nose, blinkers and crown, which was buckled on the near side with a fold-back strap. 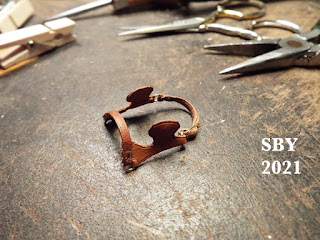 I cupped the blinkers by pressing them over the end of a dapping stick.  At this scale, fingers would've worked well, provided the nails didn't mark the grain side of the leather.

The blinker stays were glued.  The stitchmarking was drawn on with a sharp awl, and I do mean drawn:  not dotted, but actual lines, using a small drafting triangle for a straight-edge.  Here is where real optical illusion took place.  At these scales, the grain of the leather was so large that the lines appeared to be stitchmarking and the eye interpreted the individual leather pores as dots. 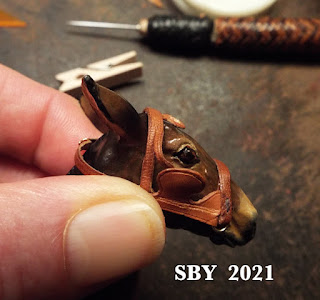 The forehead drop ornament caused me some trouble.  How to make it small enough!  I stamped an ikandi with my littlest flower leather stamp, then cut out the flower as best I could with the X-Acto.  I set it down into the leather by tooling, before hot gluing, so it wouldn't stick up. 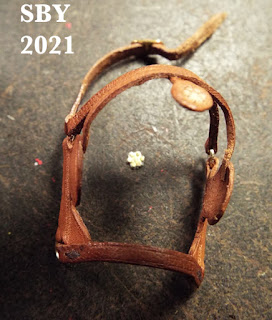 Curiously, the near mule was wearing a different bit than the off.   I chose to stick to my reference and give him his Liverpool.  Thank heavens I had Rio Rondo's teeny tiny stainless steel Liverpools on hand, previously filed clean of their edges.  It is amazing what is hanging around in the drawers of a long-term tack collector. 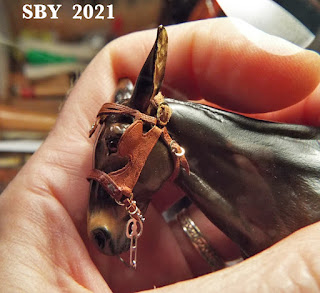 Making the buckle for the eensy bit of leather that holds the bit to the bridle was one of those mystical experiences that no logic can explain.  Its loops were smaller than my plier tips.  One has to use outside pressure on such a thing.  I dropped it several times, I can tell you that.

The photo below shows the long end of the strap for that tiny buckle still extant, (behind the bit).   Long ends were absolutely necessary, for manipulation;  I only cut them when everything was done, and even then tried to leave a long pointed end. 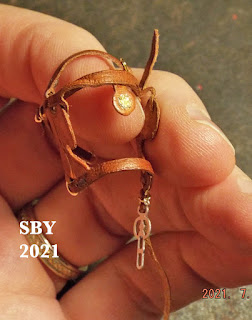 Getting the bridles on over the halters was far more difficult than I had anticipated.  It came down to "Once it's on I ain't taking it off," a rarity with me.  Adjusting everything took some dainty work and lots of patience.  You can see here that at first things were crooked:  look at that noseband. 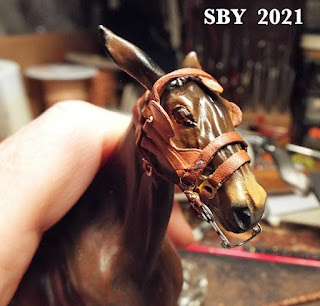 Although the mule with the Liverpool did not have a bit brace bar, I put one on anyway, as a model necessity.  Otherwise the shanks would never stay lined up. 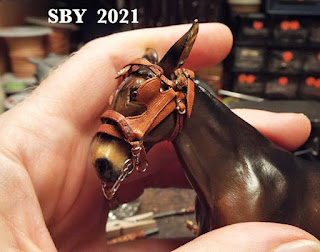 These harnesses have been very slow work for me.  Yet there is something satisfying about their gradual accumulation, their small-but-steady triumph over seemingly impossible problems.  I am deeply grateful for the patience of their owner.