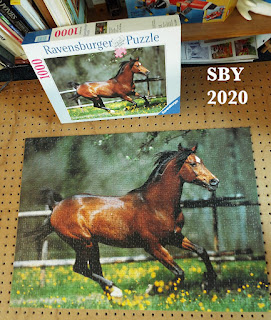 Certainly I didn't mean to take this long to get back to the Puzzles of 2020!  So much has happened since March that perhaps I may be forgiven.  Instead of 10, there are 11 puzzles featured this time.  Since 2020 saw a total of 42 puzzles worked, there has to be some fudging to get everybody in with only four posts.  This time, there will only be one pic per puzzle --- mostly.

I'm going to take these strictly chronologically.  This next one was photo'd in June; shot on June 8, 2020 to be precise.  (The photo date only means that the puzzle was completed on or before that date, usually the night before; occasionally 2 or 3 days before.)  I've mentioned before that some of my earliest beloved Springboks did not feature horses.  This puzzle is the poster child for that statement.  The Veteran Motor Car!  I dimly remember choosing this as a child in Tucson in the 1960s; it must have been the bright colors.  Historically there's a close relationship between horse-drawn vehicles and these cars.  Possibly that influenced me, but the exact reasoning has been lost in time.  I love the old Springboks with all my heart, and here be proof.

This next interesting puzzle entered our lives somewhere in the 2000s, probably from a catalog.  I've always thought puzzles are a great way to become familiar with famous works of art.  This is the Sistine Chapel ceiling, or Cappella Sistina to give it its Italian name.  The border frames make for a rather challenging puzzle.  The figures, drapery and colors are amazing although the box does not tell the stories behind them.  Eh, 21st C, you can look them up online.  Photo'd June 16th.

This next one is familiar to all us horse lovers.  I obtained this puzzle fairly early in the marriage, which would put it in the early 90s, again most likely from a catalog, although I am not sure.  This puzzle again is pretty challenging, even harder than Cappella.  Concurrently we got a book on Bev Doolittle's art.  We were never able to get another, and I consider this a limited edition and a much-sought-after prize.  Photo'd June 19th.

As I've mentioned in previous posts, Springbok is my native country in puzzles.  There are two puzzles featuring St Basil's Cathedral in Moscow in our collection.  This is the best of the two.  I truly do not remember how or when this one came to be with us; after marriage but several decades ago, which would put it somewhere between 1990 and 2009.  Photo'd June 27th.
Certainly this one came out of a catalog.  The Great American Puzzle Company, despite its impressive name, is represented shallowly in my collection.  This puzzle is thinner and more cheaply made than the old Springboks, but something about the watercolor painting must have struck us.  Photo'd June 28.  You can see the pieces from the next puzzle in the line-up.  We were really churning them out by now; the average time of completion was 6 days.

This lovely cantering horse (I call it an Arabian) represents the twenty-sixth puzzle worked by me during 2020.  We must have seen this one in a bookstore or gift shop somewhere.  The title on the box is "Spring Gallop,"  somewhat uninspired given the other Ravenburger Arabian horse puzzle I own.  (It's called Arabian Thoroughbred, a bad translation of "Arabiches Vollblut," meaning pureblood Arab.  You'll just have to wait for that one!)   By this time I was working all the puzzles myself and George was reading on the couch.  This one was hard, as they all should be, but not too hard.  Photo'd July 7.
It is a natural progression for me to transition from horses to wolves.  This lovely White Wolf, with haunting backlighting and aspen woods, is one of a set of three puzzles painted by Ian Martin MacGuire, which we got out of a catalog -- almost certainly Bits and Pieces --  in the early 2000s.  It was surprisingly challenging.  Looking at it now brings me vibrations of fear and wonderment at the unfolding disease drama that was the summer of 2020.  Photo'd July 17th.

It was an obvious choice to move next to another wolf puzzle, Nate Silver's PhotoMosaics.  This is one of only 2 PhotoMosaic puzzles I own (the other is a Disney).  What I did not count on was how hard this puzzle would be.  Hands down, it was the toughest of the entire year!  It took what felt like forever!!  Even though by actual count this puzzle took only 16 days, one should include mental feelings and stress.  I'd done it before, so I must have had some clue; but somehow that experience evaded me.  PhotoMosaics are pictures made up of hundreds of tiny photographs, and for some reason that makes them extremely difficult puzzles.  I'm good, but somehow the market can always find ways to stump even the good ones.  Very very hard hard.

This one deserves two pictures (the above is distorted).  Even worse than the White Wolf, this one held worry and fear as July moved into August.  I finished and photo'd it August 2. 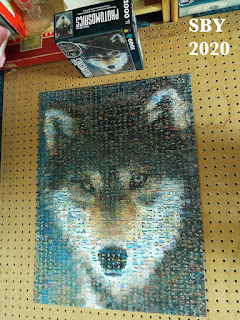 Switching between photographs to drawings and paintings, as I have tried to do, this next puzzle was amazingly pleasant, happy and restorative to work.  The news must have been better!  This is a variation on the old favorite subject of mares and foals.  This puzzle came from the Amish store, Peight's in Kish Valley, and is a Canadian product.  The title on the box is Horse Meadow and the painting is by Kim Penner.  Photo'd August 11.

The thirtieth puzzle of 2020 was this famous old Ravensburger beach view, done at least once before.  There are nine 2-granders in our collection.  I am not clear whether we ever sent a 2-grander home from Denmark -- most of them would've been 1Ks and 15-ers.  What is clear is that Ravensburgers entered our puzzle lives in 1994-5 when we were on sabbatical in Roskilde.  Oh those Danish bookstores!  I bought and bought and shipped the lovely things home, two at a time and at great cost, because at that time Ravensburger puzzles could not be purchased in the United States.  Happily, this situation has changed.

I've spent so much time staring at these palm trees that when a similar photograph turns up somewhere else, like on a calendar, I recognize it.  The box title says Fantasy Beach but I'm pretty sure it's the Dominican Republic.  Photo'd August 27.  Note that this, a 2,000 piece puzzle, took me 16 days also; but somehow it was much more relaxed and accomplish-able.

Time now to draw back and look at the larger view.  You can see (above) that yet another  puzzle has been started, and in the crunch to divide 42 by 4, I'm including it.

There's my knee cushion pillow.  To the upper right is a wrinkled-up pale yellow cover sheet, which would become extremely important in 2021. 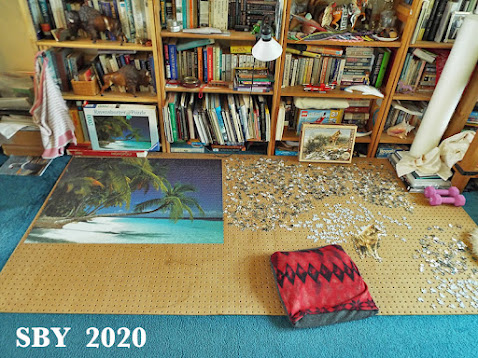 This is another proof that sometimes two puzzles are going on at once.  This usually happens when the preceding puzzle has been so long and hard that I'm reluctant about taking it down, but so eager to keep going that I start the next one anyway. 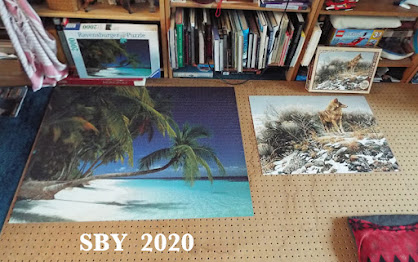 The Coyote was photo'd Sept 2, so he took a week.  The title on the box is Coyote in Winter Sage.  The painter is the famous animal artist Robert Bateman.  We also have a coffee table book on him, An Artist in Nature.

I have many subjects to blog on,... but high on the list is another puzzle.  It is very recent, 2021 -- in fact it is still up.  There are three 3-granders and two 5-granders in our jigsaw collection.  I finally did, almost completely solo, a 5-grander...!