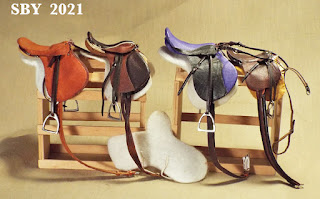 This will be a short exploration of the fabulous skills of Fara Shimbo, model horse artist extraordinaire, active in the 1980s and 90s.  Although she was at home with sculpting, painting, remaking, prop-building and tackmaking, I only have 4 English saddles and 2 remakes of hers.  These horses were repainted, haired and the Clydesdale repositioned.  But I did find a pic, deep in my files, of Western tack by this lady.  Talk about talented.

Fa's business card proclaims her as a Certified Public Nuisance.  No title could be more appropriate.

Back in the late 80s this salmon-chestnut Clydesdale came to stay with me.  He doesn't have a registry card, nor any documentation.  But my memory strongly states he is by Shimbo.  The hair is mohair and the body painted in acrylics and pastels.  My husband seized upon this one and he now belongs to him. 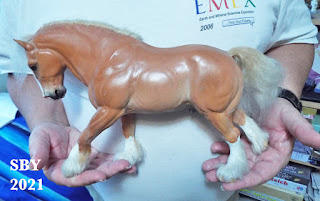 The Clyde has horseshoes made of wire and solder, another Shimbo idea.  Having to be glued on, unfortunately they fell off, but they're still around. 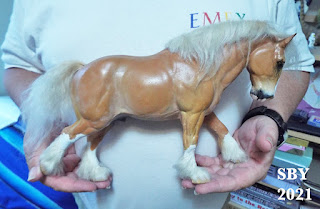 Fa's main presence in my tack collection is English saddles.  I am exceptionally fortunate to have 4 of her amazing works.  Each one speaks of the ongoing improvement process, creating on the spot, expressing a spirit very familiar with real horse equipment yet experimenting with personal flair.  This is model tackmaking from the early years of the hobby, when everything had to be made from scratch.

This amazing woven-thread English girth originally came with a dark brown racing saddle.  At the time, 1986, I couldn't quite believe it was real.  The buckles are soldered.  Eventually (1997) I retired the piece, unable to summon the intricacies necessary to fasten it, and convinced it was too delicate to withstand use --- this was at a time when I was constantly playing with tack, fitting many different horses.

The dark brown, Classic-scale race saddle is on the right below.  Here its girth is by Emma Harrison.  The maize-colored felt blanket is a Fa original; it has a white-binding center stripe.  Fa made her own saddle trees from Friendly Plastic (heat-malleable plastic pellets) and other materials.  This is a delicate saddle overall and always needs cleaning (oh those brass pins!) but it shows that her sense of proportion was spot-on. 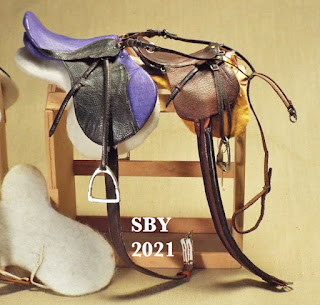 The purple saddle dates from 1998.  I purchased it through an email auction.  (If you want to know, the winning price was $45.)  It did not have a girth so I made one, matching as closely as I could the 'intent' and style of the maker.  I also added the breastcollar and martingale.  This has been a favorite piece for many years, inspiring my "matchy-matchy" collection, as seen below.  The Russians were not the first to try color on an English saddle! 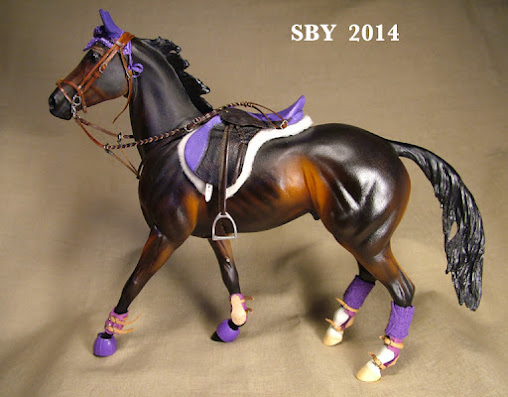 Fa has a story, too, about this purple saddle.  She made it for herself and used its photo in her catalog.  According to her:  "Someone, I forget who fortunately, wanted to buy one of those saddles and sent in a check.  I was so busy at the time, I saw I wasn't going to get around to making another..., and send her that one.  A few days later I got two interesting things in the mail:  one was a letter from her saying that she was "extremely dissatisfied" that the saddle I sent looked nothing like the one in the photo; the other was a notice from my bank that her check had been written on an account that no longer existed!  I told her about the check and that I expected the saddle back.  She finally paid in cash and sent a letter yelling at me for expecting her to be a "professional accountant." That incident, and subsequent cataracts, was why I stopped making tack."

She never made another like it.  I can only say I'm glad it appears to've been me who picked it up next.

Dang!  Rooting through the file box, I find I have at least 2 other saddles by Shimbo that didn't get thought of... one of them an oddball, "no redeeming features" says the card...  ahem...  Here is a shot of it.  The turquoise seat is a flared wrap-around, designed to support the hips (?).  The stamping on the flap was probably my first exposure to the idea of carving on an English-type saddle, heretofore un-thought-of. 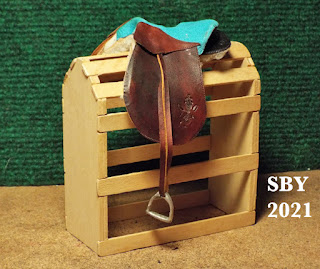 The bottom of this saddle is heavily padded with sheepskin, unfortunately out of scale but very soft and bouncy to ride.

The white-stripe saddle on the right, below, is a prized possession, made c. 1989.  There's quite a story on its registration card.

"According to Fa she sent me this saddle two different times, & each was lost in the mail.  I had moved to PA in 1987.  The third time, I was visiting CO and her and she brought out a bunch of saddles, told me to pick one.  I picked an experimental, & I thought beautiful piece -- nothing else like it.  She said it was her least favorite -- "That's how it goes!"   Chris Foote says she'd KILL for this saddle-- !!!!" 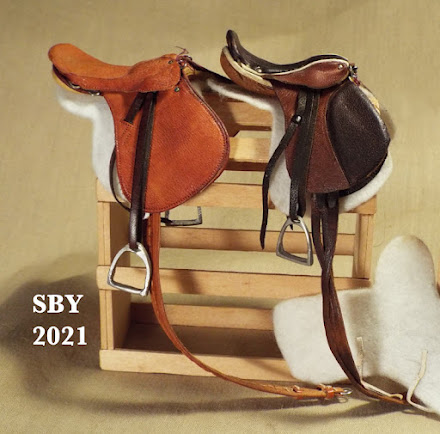 Over time I've fixed, cleaned, repaired and updated parts of all of these.  Sometimes notes are kept; other times, not.  On this saddle, for instance, the girth billets kept breaking, and I'd sew on new parts; and the stirrup straps were hot-oiled.

The saddle on the left I call the Pumpkin Saddle.  It was purchased sight-unseen through an email auction in October of 1998.  On this one I wound up doing a lot of work, securing loose piping, replacing the stirrup leathers, and making a new girth out of kangaroo leather my parents had brought from Australia.  This gave me the opportunity to make a girth that felt the way I thought they should when fastening:  having smooth-sliding buckles that were easy to work with, not fiddly sharp tongue buckles that gouged leather.  The essential proportions and colors of the piece remain Fa's.

Here is another of her unusual English saddles.  I'm afraid I don't know the photographer -- this is from deep in my private files.  It shows her sense of exploration and fearlessness.  Why shouldn't there be carving and stamping on an English saddle!?  At the time I knew very little of English saddles, being of an exclusively Western bent. 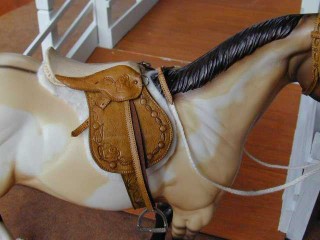 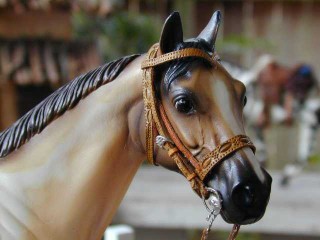 Hopefully these few examples will help identify Fara Shimbo's style as a tackmaker.  One particular part of her English saddles is an almost fail-safe clue:  the stirrups.  Fa made her own stirrups, she told me, out of a "low-melting-point metal sold to weight down model train cars, cast into a silicone mold and then polished."  "I melted it with a soldering iron.  Probably something called Bare Metal."   The stirrups appear dull silver in color, filed flat and blocky, not symmetrical or perfect.  All but my earliest saddles by her have these unique, handmade stirrups. 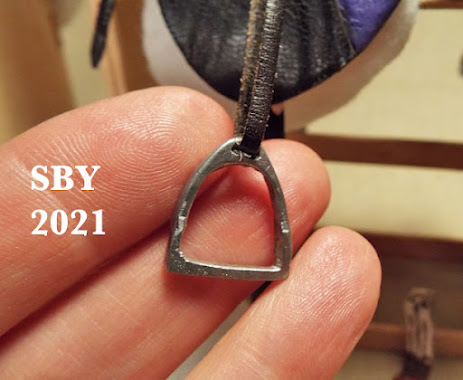 Time to trot out my motto, pinned over the workbench:

The Artisanry of Model Tack lies not only in the researching and duplicating, in miniature, of that which exists in the world ...  but in reaching out to explore and create new forms, new horizons, never seen before...  It is an Artistic Medium, just like paint or clay ...  ... At the same time, Model Tack must remain solidly connected to the form and function of a working toy, which is what I consider the model horse to be.

A piece by Fa could capture her spirit of sassy experimentation and still remain a realistic piece of tack.  Here is the one Western saddle by her I have a picture of.  Fa thinks she took it: 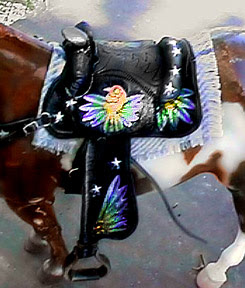 Fa was so into iridescence that she wrote books about it.  I know the term Crystallier because of her.

And finally, my other horse by her.  This beloved old Appaloosa Mare is my best example of what an artist can do with colored pencils.  She rattles, she's coarse and rough, --- and I love her to pieces.  Fa gave her to me for Christmas 1987.  Named Timmaine, she is wearing my Evelyn Munday Brindle-seat saddle (2012), hackamore by TSII.

Thank you, Fa, for sharing your wide-ranging model talents with the world.   I still remember the ferrets and the model dogs, and your horse, Chewie.  You helped inspire and steady my own model tack journey,... and do so even now.