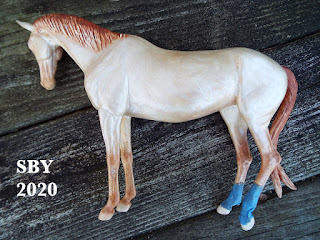 Marimba is my third NaMoPaiMo horse.  As the woman of the family (stallion Brasenose in 2018 and filly Ambolena last year), she is naturally the most difficult, most mysterious and temperamental of them all!  You see her here mid-metamorphosis, after Layer 6...  Six of who knows how many more layers.  Perlino is hard.

I started prepping on the 17th.  This is my only prep picture. 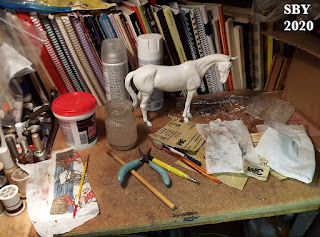 This is Mufida, sculpted by Margaret Malova of Bologoye Russia.

She is quite difficult to photograph.  Not only is the mold challenging, though that's bad enough:  The long curved neck, with its long splayed ears, combined with my camera's somewhat fisheye approach makes her head often look much too large.  The long lanky body and slender legs, while appropriate for an Akhal Teke, make most shots downward ones, resulting in a warped viewing angle.  But combined these with the Perlino!!  The pearl layer causes serious washouts, reflections and white glares that obscure her color and just don't show what she actually looks like.  This post has a variety of shots -- and not one of them is really her.

I have learned so much painting her these past two days. 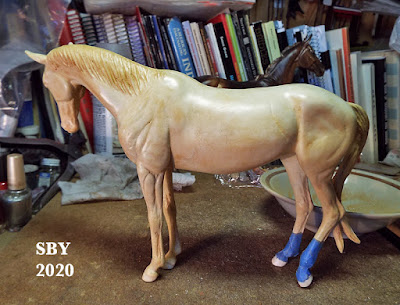 To begin with, I'm astounded I got so far in only 2 days.  The 22nd happens to be the day I finished Ambolena last year... !!  I was just so derned busy for most of Feb.  The first week taken by being in Tucson; every day since then has been crammed with chores, errands, and setting up and testing (and downloading fixes on) a complete new computer, plus maintenance of everything normal.  Oh and I was intent on working on TSII #457.  (Which is going well, by the way.)  I don't really know why I've been so consumed with my own busyness.  Only in the past few days have I just decided to ignore the other calls on me, ...  and we'll see how long that lasts.

Prepping, while not as difficult as Ambolena's, revealed a few divots.  The worst was this near fore cannon.  I eventually filled the hole with multiple layers of Elmer's. 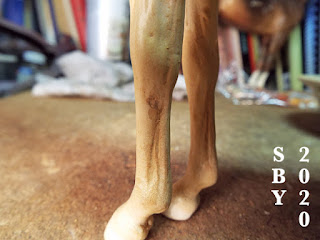 I think this is Layer 3 (below).  After Layer 2 , (and until now, that is, 7)  each layer of pastels has been only on the points:  mane, tail, knees, hocks, pasterns and face.  Unless you count the pearl. 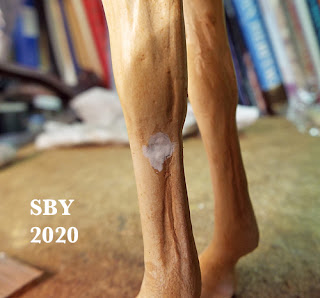 This is the last shot before the pearl.  The wash of yellow is from another light source and not paint.  Note the blue tape stockings.  What was a good idea with Brasenose and Ambolena turned out much less useful with this horse.  Her hind legs are delicate and bendy and her body long and weighty, so I can't just 'hold her up.'  But I can suspend her upsidedown by her ankles. 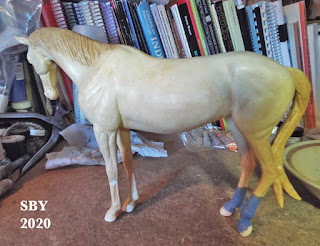 Very undignified.  But it allows sealant to reach the belly.  :)
I was in love with the Pearl-shaded Akhal Tekes.  After the success of Ambolena's gilding, why not?  I wanted to try the same procedure on the mare.  On the 21st I gave into greed and started painting with rubbing alcohol as a solvent. 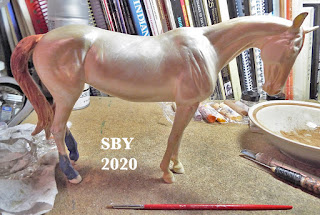 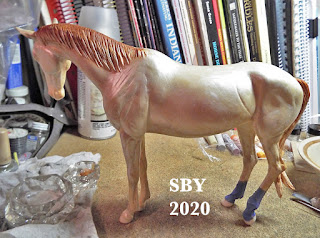 What had worked on a filly with 10 layers of buckskin and sealant was much less impressive on a Trad mare with only 2 layers of near-white.  The alcohol melted through and caused streaks.  The size of the brush -- small -- was making the streaks worse.  I had a lovely overcoat of glittering pearl -- Yes, that part worked!! -- but to extend it over the whole horse turned the entire project into a mess.
I also did the mane and tail with alcohol, resulting in a water-color-like texture.

Again, it is really hard to photograph this phenomenon. 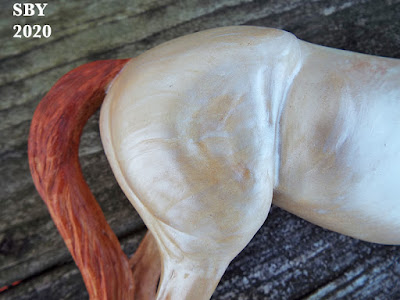 The last thing I did on the night of the 21st was to revert to pastelling, and put another layer on the knees and hocks.  Spraying it revealed a softness and color that was pleasing.  With this small comfort I went to bed.  Next morning I shot Marimba outside. 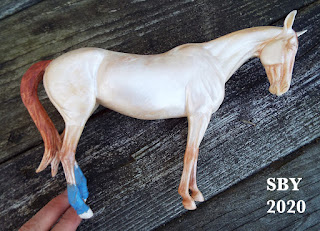 So here we are, amazed at our own progress, and annoyed that I forgot things like the Ugly Stage, or that I was greedy enough to try alcohol too soon.  Overnight more ideas came:  more pastelling, and to try pastelling the Pearl-Ex itself.  Clearly a brush, even a big soft one, is doing too much damage with the alcohol at this scale.  If I were an airbrusher, that would probably solve the problem; it could apply a smooth thin layer in the fashion I wanted.  But I'm not. 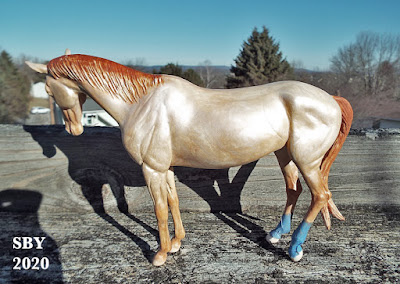 "Not done yet."
I'm having fun and the weather is fantastic.  I painted Brasenose in the dark in sleet, rain and snow; Ambolena was done in snow and cold.  But Marimba promises spring.  Being a redhead myself, and not forgetting about Flame Manes (unlike Brasenose, she has mane enough -- thank you Margarita!), I'm well on my way to Claybank Dun.

Thank you, NaMoPaiMo.  Come join us.