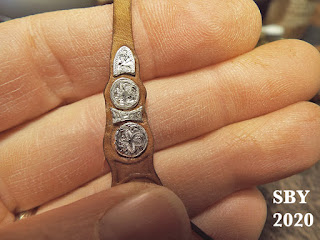 Timaru Star II #457 is making progress, though often against what feels like a stiff wind.  On the one hand, we are way ahead of where the last Goehring saddle was at this time in its creation.  Five months (instead of 15) and we're already halfway!  On the other hand, there has been no work at all done on Marimba, my NaMoPaiMo horse.  :(   I had not figured on February being hock deep in everything!!  Where does the time go?!?  I only know that, as an artist, I must follow my Muse, ... and it has been saying, as strongly as it knows how, that I should engrave silver and work on tack.
So I did. 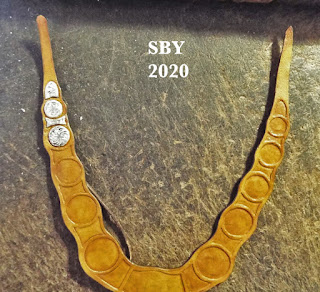 Engraving is a multi-step process; and each step is a separate art.  We have already seen the cutting out, filing and shaping of the pieces.  Next comes the soldering of the silver wire loops on their backs.  At this time not every piece is done,... but we have only 9 to go, out of a grand total of 40. 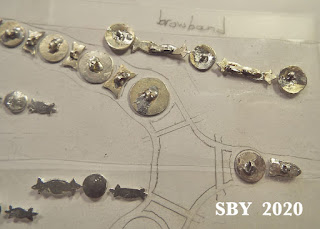 I  kind of forgot to dome some of the conchos before this step.  That's going to create an interesting challenge.  I can think of a couple of halfway workable procedures for that,... tackmaking is like this...

The next step in engraving, as we've seen before (Goehring Breastcollar Engraved),  is the making of holding blocks for the individual pieces.  This is necessary because they're so small.  I can't just clamp them in the vise by themselves; they need a matrix, an embedding material of some kind, for the actual engraving.  Enter Thermaloc.  This is the brand name of a heat-softened plastic.  The smallest amount the company sells is two pounds.  So,... I bought 2 pounds (and now I have enough for me and every other model tackmaker I know for years... !).  Each piece of silver is stuck into a lump of Thermaloc's grey plastic while it's still soft.  As I mentioned, it's hard to work with, being impossibly sticky when too hot and useless when it's too cold.  The working time feels like half a minute. 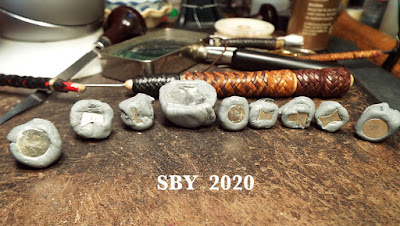 You might recognize the largest piece:  it's the center of the breastcollar.

After engraving, the next step, -- after prying the piece out of the Thermaloc -- they usually pop out easily -- is to set the concho in the breastcollar.  This is not just gluing.  This is a whole 'nother step of fitting, filing, cutting and adjusting so that the silver sinks down into the leather.  That tiny line of shadow around the concho is the difference between 'just another toy' and professional model tack that breathes life,... that looks so like the real thing,... that wows.

That shadow-line is why I tool down the backgrounds for my conchos.  That line is movable,... you wouldn't believe it, but it is, as is the edge of the concho.  But, naturally, at this stage the moving is expensive and difficult.  One aims for as little as possible. 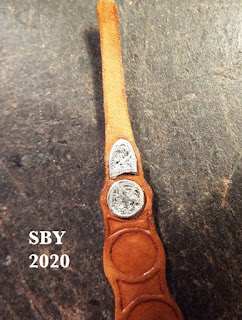 Here's a glimpse of the back side.  Leather lace is threaded through the tiny loops.  The stress on the lace is so great it often breaks -- as it did here. 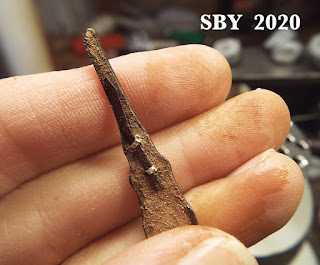 Here's the back of the top 4 conchos.  Lace ends are glued down. 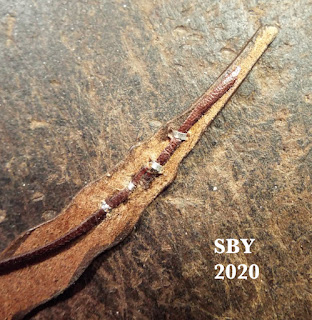 All this will be covered later with a lining leather.  Not only will that protect the horse from scratches, it will hide the details of construction.  Instead of relying on a glue bond, this breastcollar relies on a soldered-metal bond and the strength of the lace.

As usual this time of year, I have a few soft deadlines and a hard one for tack.  The hard one is early May when I leave for Colorado.  To make that journey one more time! -- it's a miracle every year.  Surely this saddle will be finished before then.  But I do not feel I can promise anything.  This kind of work is dictated by diverse pressures I feel only partly in control of.
The Muse wishes we could work on Marimba too.  I'm not saying we can't!  She might yet greet the light of day.  But we'll just have to see.