I thought a comparison between the two recent black releases of the Classic Stock Horse Gelding (aka Liam) would be of interest.  Indoors they certainly look alike!  But there is more of a difference between Black Beauty and the Royal Canadian Mounted Police horse than just the number of socks. 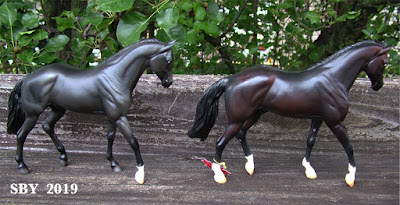 Take them outside and the differences become much more obvious.  These shots were taken on an overcast day in the afternoon and then darkened with PhotoShop, because my camera overexposed them...  ggrrrr...  Their socks are still washed out.  But you get the idea.  Black Beauty is basically a grey black, while the RCMP pony is actually a very dark bay.

I don't have more than one RCMP to look at, so I'm unable to tell whether his star is supposed to be a Maple Leaf.  It would be entirely in character if it were!  However, if you study the Maple Leaf on his rump (below) ... you'll see this star is rather wide of that mark. 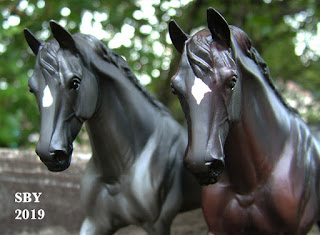 I went to BreyerFest this year intending to see the Royal Canadian Mounties perform.  I had seen them once before, at Penn National (thank you Didi!) and they were spectacular.  Unforgettable!  As it happened, however, during BreyerFest other issues came to be more important that night and the logistics defeated my plan.  When I spotted the RCMP pony next day, in person, and discovered he really was 'not just another black,' I had several reasons to buy.  Yes, the price was steep; but this money is doubtless going to support the RCMP. 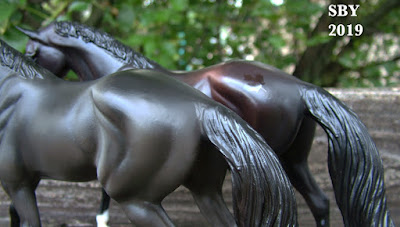 I had difficulty sticking to what RCMP stood for;  I kept wanting to say "Rocky Mountain National Park."  For someone who grew up in Boulder CO, ... and who once wrote a  college paper on re-introducing the gray wolf to RMNP ... this was a natural thing to do.   I said Rocky once too often, and realized I'd named my horse.
The Black Beauty was named Stowaway earlier this year, when he sneaked out West with Palatlakaha and the other trip horses. 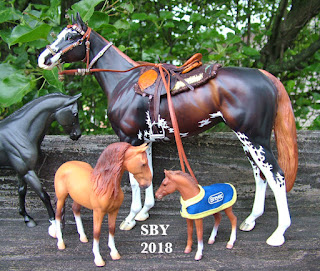 I mentioned I conga this mold.  It was sculpted by Sommer Prosser.

If logic and known history ruled, you'd think I'd get the palomino, the only current color missing.  (I consider super-rares, i.e. glossy Liam, bay, etc. as not possible.)  For reasons hard to explain, I don't want him.  Probably because I've so heavily invested in other palominos... not just my Stablemates but Parade horses... it seems like a balancing thing.  I appear to have a few irrationalities.

Data from ID Your Breyer (thank you Janice!).

SPEAKING of IDYB, here's a handy reference list.  I got this idea when I realized, after much looking, that "Emerson starts with an 'S!' "  Feeling a terrible need, I came up with this.  Feel free to copy and use.