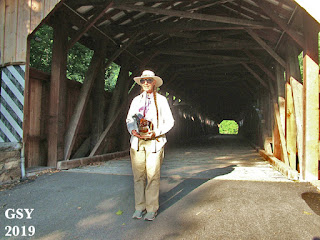 For me, the 1st Annual PA Model Meet Up was very nearly a clusterfail.  If not for a brilliant  navigator and long-haul friend, several hours of patience, and a bit of luck, I never would have found them at all.  Heaven knows what I would've done left to my own devices.  Cried a lot harder, I suppose -- as it was I cried a teeny bit.  I find disappointed hopes to be very bitter.  Fortunately for me, they are very rare as well.   When the whole day was finally over and we were back safe in our own driveway, my husband Geo said, "What did you call it?  A Clusterpickle?"  and I laughed so hard I knew I was recovered.  A family phrase was born.

The story began with a FB post on Region 9 Group.  A First Annual Model Meet Up, also called PA Model Meetup, was proposed in York, about 2 1/2 hours south.  It sounded wonderful:  an open-air backyard model show with vendor booths surrounding.  The timing was very good, a month after BreyerFest, when my interest was rebounding and I had plenty of horses to sell.  As for the weather, it was nothing less than perfect.  Geo wanted to go on an expedition, as we do most weekends, but not on such a long canoeing one as we'd been doing lately.  When I tentatively spoke of the Meet Up, he was enthusiastic.
"I'll read Herodotus in the shade while you're yapping, and about 3 we'll head back home with a long scenic drive up 94," he proposed.  "There's even a covered bridge!"  Long scenic drives are famous in my family and he pulls them off with great flair.  I prepared both lunch and dinner in advance; we would use the big cooler.  I packed the night before.  Two card tables, a chair, two serapes (one for tablecloth, one to sit on), ALL my sales horses -- the large monitor-case-ful leftover from BF and the 3 mint-in-box ones, plus the 30th-Anniv. Stablemates box,--- went in back.  I also took my current tack project in the Orange Tackle Box (I had barely made the headstall in time, so as to braid buttons during the day), my showkit (for emergency tack repairs), music CDs, and a show-off horse of my own.  It was this last I posted about on my own FaceBook.  Only the headstall-making prevented me from posting that I would be offering tack repair.  In hindsight, that was a blessing...
We took the Gazetteer, as we always do on road trips.  He took his GPS.  And I took my new laptop, something Geo warned me about ("Don't let anyone steal it!") but it's so new a toy it was still 'fresh,' and because I had dim ideas of it assisting some Guide sales.  I took my jump drive, my Guide disks (and Tutorial disks, and even the Best Of disks):  items which I've had hanging around for years, but which no one ever seems to want.  Old tech!!

I didn't want to show, but I did want to vend, so I'd sent in my $5 vendor's fee (July 30).  I printed out 3 pages.   Two were maps and 1 was the first page of the classlist, which had the address and contact information.   I went over with Geo how to get there.  Having entered "York Camp Security Park" in Google,  I discovered a lovely open field with a gravel parking lot.  The location seemed so perfect for the Meet Up that it never occurred to me that wasn't the place.
I followed Meet Up news on Region 9's FaceBook page.  Since I wasn't entering the show, it didn't occur to me to visit the show's page.  It also never occurred to me that there was a second page beyond the show page:  a Group just for the Meet Up.  I noted who would be there that I knew, and even posted that my famous saddle, the Elk, would be there.  The stage was set. 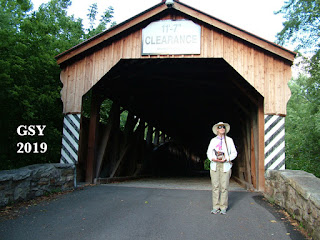 We left around 8:30am:  oldsters must have their breakfasts.  My flawless navigator delivered us to where I said to go at 10:45.

And there was nobody there.

Not one table of ponies.  Not one car with a horsey bumper-sticker.  No signs directing us that the venue might have changed.  Just a couple of moms and their kids on the swings.

And just like that, I was in another universe, with all my perfect preparations and plans blown to smithereens... having to recover whilst in motion, balancing everything with a partner, hundreds of miles from home, without a smartphone.  We don't have them, although we do have cell phones.  For the first time I saw the address on my printout, 137 Eastern Boulevard.  Geo seized upon this evidence, and for the next 3 hours we tried to find it. 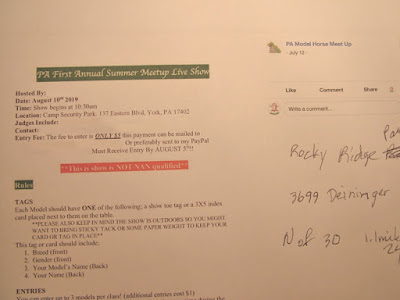 We drove all over York.  Discovering we were at 3600-something, logic dictated we head back west along Eastern Blvd.  We covered the whole of that Boulevard, all the way into town -- into such quarters as he (and me) would never feel comfy visiting.  Eastern Boulevard ended around 1700.  There was no lower block of it.  There was no phone number I could call.  I wondered if someone had got the date wrong.  At one point we went back to Camp Security -- and found a large birthday party in full swing!  A carful of pink balloons had been delivered!  I really wanted to congratulate my hostess on those balloons...

Finally in desperation we went back to the Turkey Hill gas station we had located when we'd first set this up -- it was the closest bathroom to Camp Security Park.  I went in hunting for a map.  I came out with a kind clerk's smartphone help, having located 137 Eastern Blvd precisely where we'd first looked.
Checkmate.
At last, after eating lunch in our car (it was around 11:30), one of us got the idea to find a McDonald's and use what we knew to be free WiFi, open up my laptop and look up the FaceBook group.  My husband hates Facebook, but it was clear we needed it.  Good thing I'd brought my new toy!  and that it was charged up!!  Alas, the Turkey Hill did not have WiFi...

It took a while to find a McDonald's; at that point he had given up and I very nearly had.  When we did, we were in for another shock.  The screen showed a FBk I had never seen before.  There were no pictures, only links along the left side.  It was eerie and very strange.  This part of my story I can only explain by comparing it to a nursing-home's computer: probably restricted-bandwidth packets.

The laptop was on his lap, since I was driving (I drove nearly all this day.  I'm a better driver, he's the better navigator.).  Acting on his own, he tried to get Google maps, and succeeded.  With this small encouragement, he then brilliantly asked Google for the "true name" of the show.

And there it was.  Two addresses instead of one:  What we'd been missing.  I wrote it on the map (6th photo, above).  Instantly he found the new location:  Rocky Ridge Park off Deininger Road.  It was north of State Highway 30, the exact same spot as Camp Security had been to the south -- almost as if the 2 locations had been flopped.  It was now about 1:30.  I had to decide whether to pursue my shattered wishes.  I chose to attempt.

Back through York we went.  It was easy to find Rocky Ridge Park but hellish to locate the Meet Up within the Park.  Inside the entrance were 3 driveways -- but no signs.  At random I chose the central and we drove to its end, what seemed a mile, then turned around and went back to the entrance, checking out at least one populated pavilion on the way.  (Bathrooms are necessary for oldsters.)  North driveway?  Nope.  South?  YES.  It was 1:55...
To honor the 3:00 departure I had one hour.  It was not worth while to set up tables and lay out ponies (although one person encouraged me, bless her heart).  Most of the folk I had come to see were gone; the show was in its last classes.  My burning question was when, and where, the change of venue had been posted.  Geo didn't trust himself to ask and went off on a hike.  There then occurred one of those magical transformations wherein a burning frustration is tempered into gentle inquisitiveness by personal contact.  The hostess defended graciously, honestly and openly:  The change had been posted in 4 places over the past week.  The fault, well and truly, was my own.
Business was conducted, networking occurred.  Admiration of new models happened.  Best of all, the old-timer network provided me with sympathetic friends.  Truly when one is recognized, all is made right, and things come back into balance.  Gradually I calmed down, and began to very much enjoy myself.  I was stunned at some of the Stones I was seeing.  How does rural central PA support such a number of Bunnies!?  Rainbow Zebras, CM Unicorn foals in Decorator colors.  I got to pick up a Benasque!  I found myself yearning after Stone's giant new Warmblood.  The show even had an announcer-at-large.  It all looked like a success.
Much later, Geo would ask me both what he could have done better (oh! the calibre of that man), and what I could generalize from all this.  There's no denying this was a huge kick in the pants for me to consider having a smartphone.  But constantly checking FaceBook is not how I choose to live my life...  I already have 4 phone accounts:  a landline, a dial-around long distance and 2 cell phones.  I was on the brink of phoning a model friend (apparently my own response being to fall back one level of technology) when he and Google saved the day.

Tiny clues it wasn't my fault:  Multiple FBk pages for the same event.  Lack of a redirecting sign at Camp Security.  Lack of signs at the entrance to Rocky Ridge Park.
Tiny clues I should have caught:  Inaugural events have a higher chance of changing something.  The event had two names.  FBk groups are so easy to create.  There wasn't more discussion about the Meet on Region 9.  The street number of 137 matched so badly with the other street numbers in the area (3600).  There was no acknowledgement of my $5 donation.
From 3:15 to 8:30pm the two of us drove across the length and breadth of a beautiful land, passing orchards, pastures, farms and fields.  Thirty to 236 to 74 to 94 to 322 and home.  I saw gorgeous horses and stunning vistas, and whole counties of cherry, apple, peach and nectarine trees.  We went for a hike.  We found the state's longest covered bridge, beautifully restored, and here I had my picture taken:  At long last, as promised, the Elk saddle was on display!!!  The next morning, in a fit of determination, I set up my tables and serape and pulled out all my stuff and shot it in my own backyard.  And that is what you're looking at here.  Make an offer.