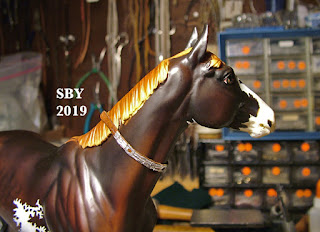 I haven't been this excited about tack in a LONG time--!!!  I'm having WAY too much fun testing my ideas for an Akhal Teke set of neck jewellery, bridle and breastcollar.  Right off the bat I want to say that Yes, I've joined NaMoTackMo;  No, this piece is not it, because it was started before the official opening day; Yes, consider it a practice; Yes, I hope to be building a piece like this for myself for NaMoTackMo; and Yes, this Practice set will be for sale!

As usual, having taken pictures, in the time it takes me to walk to the computer room this went from a FaceBook post to a blog post.  At least this way I can indulge in shameless commerce.

This is Emerson.  I think he is the closest Breyer has yet come to an Akhal Teke. 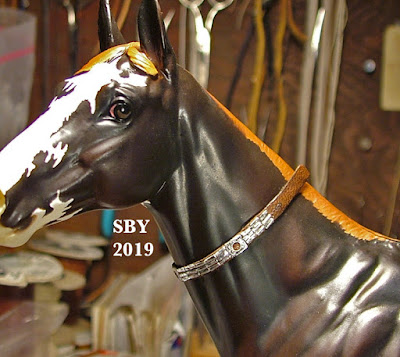 My ideas for this kind of tack were, of course, formed and shaped by the over one hundred model Silver Parade Saddles I have built since 1979.  For the TSII a piece of silver tack should be a slam dunk.  Except it wasn't.  I have never made an Akhal Teke set.  I've never owned one.  As was the case with real Silver Saddles for way too long, I've never touched one, never seen one in person.
Thanks be to the Internet then, with its wealth of pictures. 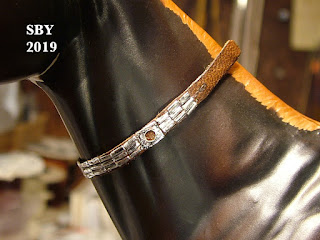 My ideas for an Akhal Teke neckband, at this point in the career of the Timaru Star II, centered around ikandis, a brand name of iron-on spots.  All the metal seen here is created from ikandis -- gloss silver squares, 3mm and 5mm, if you want to know.  The 'jewels,' so prominent a part of Akhal Teke costumes, are not in yet!  That is plain blank leather you see in the little frames.  I can only move so fast.

The long slow part is making each spot by hand, shaping them on my stamping block.  They are only 1mm x 3mm.  Cut a 3mm square in thirds, cut a grove in your wood block, put a blank in it upside down and hammer a wide chisel on it very, very gently (or you'll cut it in half).  Presto, a half-tube shape, which is about at the limit of what I can control, sizewise.

I got impatient tonight and 'cashed in all my stamps' with assembly.  I plugged in the Monokote gun (Trim Seal Tool) and waited until it was very hot -- this is the secret of setting ikandis.  Three at a time, I put on the spots I had made.  The above has taken me 2 days.  But the look!  The look is what I was after.

The 'jewel frames' are made from 5mm squares.  I'm still working on how to do the jewels.  I know what I want, just not how to get there. 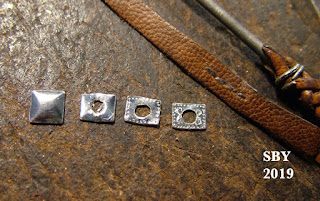 It's been a long time since I've made such tiny buckles and straps.  Twenty-four-gauge stainless steel wire, hammered, for the buckle and 26ga for the tongue.  That's my sewing scissors in the upper right. 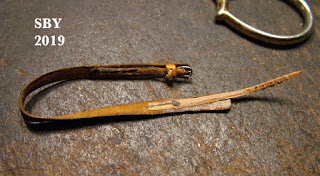 The hardest part, next to the making, was manipulating such tiny spots for the hot gluing.