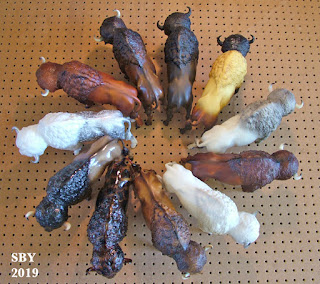 Although it would seem obvious I have no choice, -- I conga the Buffalo!, -- the decision to hunt Waban the Charcoal was actually very difficult.  I am writing this while I still don't know whether I've been drawn, so the post should have an added depth and feel, and be more 'real.'  When I entered for Banff the Silver Dapple Buffalo, I was sure I'd win -- and I did!  When I entered for Waban I had no feel at all for what would happen.  Over the time of writing this, I've come to some conclusions.

This post is brought to you by a most extraordinary creature: a Charcoal Buffalo.
This is Waban, Breyer's latest "micro offering."  The deadline for entering for him was Friday the 15th.  Had I been on the road, as I often am, I would have missed him entirely.  This was one of the shortest offerings (or Web Specials) I've ever seen, spanning just 48 hours:  11:00 Wednesday morning to 11:00am Friday.  The numbers are short too:  only 50 head, as opposed to Banff, who was issued at 300 head.  But the price is anything but short:  a shocking (to me at any rate) $235.   Banff cost $145, back in 2014.  He was Frozen-inspired (seems to me).  We may never know what triggered the sale of a Charcoal.  Beware the Ides of March?!  I cannot think Waban has anything to do with Saint Patrick! 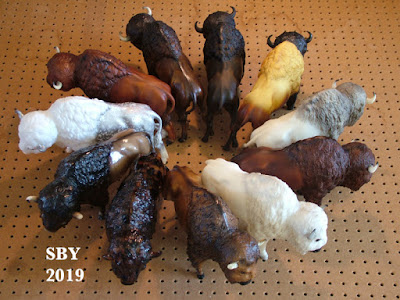 I have been promising to do another Buffalo Conga post ever since BFest last year, when I got my 11th buffalo.  If nothing else, they all got cleaned for this outing.  Here's a link to my previous (2015) post:  Buffalo Conga  It gives all the collector details for my first 9 (and much else).

Since then I've added 2, which in itself kind of tells what the long-term expectations are for this herd.  Both my new ones happened to be from Heather Wells' disbursement of Karen Grimm's BHR (Black Horse Ranch).  The lightest brown one is an O.F., a variation to delight the heart of a collector and one of the first pieces I ever got from the BHR.  Greymantle is a genuine Karen repaint, and is signed BHR in gold between his hindlegs.  (Anyone getting the ElfQuest reference?)(Sorry, that's Greymung, my mistake)

When I saw Waban, it was the old story.  I felt I was the perfect customer, just what Breyer wanted... but the cost, the awful cost!  Is this inflation or Breyer taking advantage of/ trying to control a collector's market?   By entering am I sending a message I'll regret?  We'll never know how many people applied for him.  Whichever way this falls, there will be consequences!!  to quote Hiccup (of How to Train Your Dragon).

If I win, my BreyerFest fund will be set back;  out of that comes their own ticket price, as well as nearly every other BreyerFest item;  this fund grows slowly and unpredictably.  Breyer will have every excuse to do this again (!).  I am seriously considering an extension to my NaMoTackMo plans if I win.  Two sets of Akhal Teke tack instead of one; or even (gasp) make only one and sell it!  Are you serious?!  Since when did a buffalo weigh more than a set of Akhal Teke tack for your beloved Brasenose?  Or Emerson, it might well be... !!

But if I lose, I'm starting to think I'd be more comfortable.  There are buffaloes I don't have for this conga as is.  The Woodgrain.  The mysterious all-over-grey, issued in the 1970s.  Buffalo Days white, 1995.  And, thus, the Charcoal.  Secondary market hunting I'm comfy with,... and beyond, an even more enchanting idea:  Repaint!  Ahh, not for nothing are my fingertips still sparkling with trembling power in the aftermath of NaMoPaiMo... !!   I know of at least one Copenhagen Buffalo out there, a repaint if ever there was...  Not to mention the Wedgewood repaint I pinched a picture of in 2016 (photographer and painter unknown; credit will be given if you can tell me!).  You can pick up a decent Buffalo body on eBay for around $25...

I thought I'd add this shot, which shows how different and striking Taima, the translucent Buffalo, is: 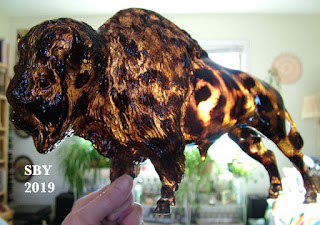 Taima is a Connoisseur, one of the very few Translucents (clearware) in that series, and the only non-horse translucent I know of.  Thank you Margaret L.  !! :)

This facing shot shows how light the lightest-brown buffalo, the one from Karen, really is.  I'd never seen one like it.

One thing I already know:  To support my current congas, other congas are being broken up.  Anybody interested in a charcoal ISH, Stone Arab or Weanling?  Or an O.F. Inolvidable from my Yorkie Pasos?  Conversely:  I'd pay for a palomino (dunalino) Fylkir (G4 Icelandic SM) - !

The conga collector has to make choices.  Waban had me trembling on the brink, falling a bit faster than I should have and slowly coming to the conclusion that I'd be okay if I lost him.  I still don't know whether I've won... but at least I know how I feel about him.