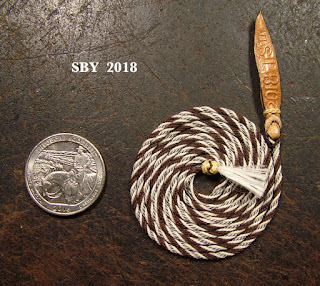 I've finished one mecate and am deep into the second - my first grey one, for the Roby Canyon set.  Both these mecates will eventually be up for grabs.  Yes, the one above is now available (customer wants another).  In the process of making the Roby, I seem to be spinning off so many spare parts that a second hackamore could almost be made!  However, given all the small pieces I'm intending to do right now, I think the best thing to do would be to sell those parts by themselves.  See the last paragraph for my current plans for these.

It was yesterday I decided to test my grey mecate design ideas by wrapping the strands around my Needle Awl and photographing them.  I'd never done this before.  Previously, mecate designing was all done on paper, in my head, or on the rope itself in the process of starting the spin.  There are only 5 colors!  But this way I could capture the subtleties and examine them at my leisure.  I was so intrigued by my results I decided to blog about them.  There were indeed subtleties -- and there was a clear winner.
This is what I had to work with.  You are looking at a week's work.  Each one of these strands takes 3 to 4 hours to make.  They're crafted entirely of hand-spun thread.  Although the photo doesn't show it well, the checkered strand (left) or 'check' as I will call it, is a pioneer.  It alternates white-black with white-grey.  I dyed the grey myself, as documented in a previous post.

The pair on the right, the black and white, are connected.   They will provide one black and one white strand, while the others provide two grey strands and two check strands.  One of the solid greys will be the core.

In the course of the Roby, I'd drawn a lot of design tests.  At first I took them from real mecates.  Later (the black ink ones) I invented my own.  I was pretty pleased with that last one (lower right) and decided to go with it...

...even drawing it up in my current N.A. Notebook.  "Dry" refers to Dry the Sea, the horse modelling for the Roby set; he is known as Ichabad to the rest of the world.

And then, as often happens, I was hit by a new and wonderful idea.  At least it happened before I'd actually started spinning!  Oh these inspirations.  They can be astonishingly worthy new ideas or they can be the most time-wasting rabbit-holes...!  My standard method of making Trad-scale mecates indicates only 5 parts to the twist (the 6th makes the core or 'inside' of the rope).   Yet my research revealed I'd once made a 6-part, that is, six strands visible with a 7th inside as the core.  Of course that means a lot more colorful options, and I was taunted, not to say tormented, by possibilities!!

What happened next was 3 days of rest from the Roby and completion of the first mecate, which turned out to be incredibly difficult (as well as taking three times as long as it should have).  (I had cut it too short and was busy figuring out how to extend it and undo a button with a lot of work in it.)  I had had an exciting night pondering the grey's design (amoung other things), and I thought it didn't have enough black in it.  My morning-after answer was plain:  check-check-white-gray-black.  To quote:
"Altho this doesn't place white next to black, remember the check strands are unusually white.  The grander, larger overall pattern is a simple alternate.  Altho I'm not completely "in love" with this approach for TSII mecates, I feel a 6 is way too ambitious at this time.  We are SO behind!  Also this 5 creates a way to show butt-joins for ABFTMH [pronounced Abaft-muh] which is really important!!"
ABFTMH, dear readers, is my next book:  Advanced Braidwork for the Model Horse.  (hint:  probably years to go yet...)
Butt-joins, for the uninitiated, is my phrase for where two threads must be stuck together end to end, with as little overlap as possible.

It was a bit tricky to get the threads to behave for these shots, but a weight laid on them on the left helped.  I'm calling this first design One.  It is my original idea:  check-check-white-grey-black. 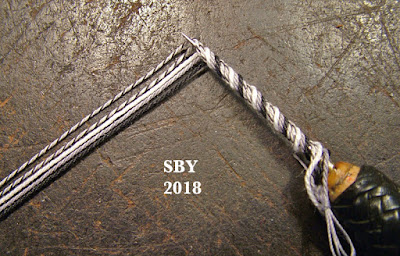 Here's Two.  The gray has been placed between the checks. 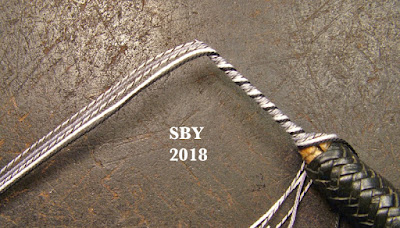 Another photo of Two, aligned the same as One.  white-black-check-grey-check. 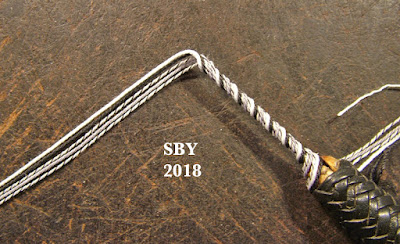 I started to be unhappy about how the greys all disappeared into one another and how the white didn't contrast well.
Here's Three, checks next to the black. 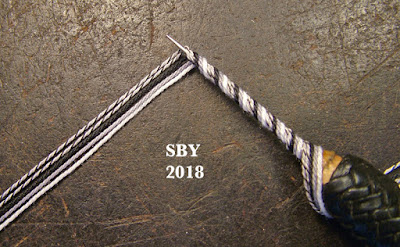 Here's Four, black between the checks.  It didn't work quite as well, I felt, because the checks 'bled' into the black and the white was undistinguished.  By which I mean not having much contrast. 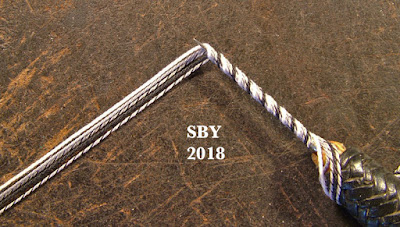 And here's Five, with the white between the checks. 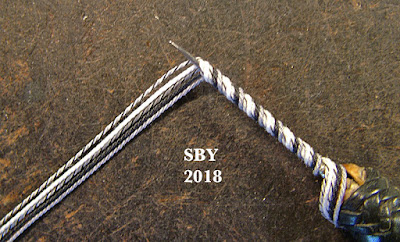 At this point I suddenly realized One and Three were the same --!!  one read down instead of up.  Duh!!!  I also realized I wanted the checks to be together.  They were so pale, evanescent; they needed multiplying for strength.  That was the problem with Five; a single check wasn't very effective.  (It would've been more so if it'd been solely black and white.)  I could either have black and white together in my mecate or checks together, but not both; if I did, I'd have Two or similar.  The problem with Two was the greys didn't show well.  I did want the gradation white-grey-black.

And so my problem was solved.  My first design, the one that came to me in the night, had after all been the right one.  The rabbit-hole had been just that, a detour unnecessary.  Why did I have to follow all these detours??!!  My self-discipline is very ragged around the edges!  But at least I had some good ideas for next time.

Ever since then I've been spinning like mad.  It takes just as long to twist up the finished rope of a mecate as it does to make the strands -- more so, when I try to smoothe it out and all the inconsistencies bunch together and ruin things.  I can only go a few inches at a time; ideally, I now think, one inch at a time.  This is rope-making in miniature, and all parts must be even tensioned.  And that's hard, really hard.  Somehow mecates are the second-hardest piece of braided tack I can make (behind bosals). 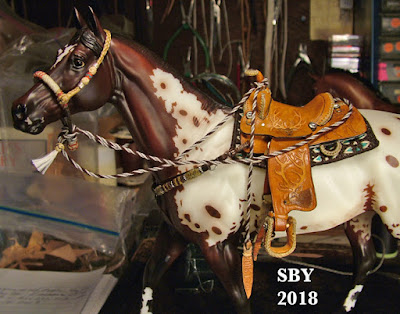 UPDATE.  As of Sept 1 the grey mecate is finished; look for pictures on FaceBook.  Also, I have finally decided to take offers on the brown/black/white mecate (illustrated here and at top of post).  HORSE AND OTHER TACK NOT INCLUDED.  I'll put the small Roby bosal up on eBay; this auction will have to wait until after the 10th because we plan to be out of town.  But the mecate is indeed up for grabs.  You could email me right now.  : )  Given how much time went into it, I am hoping it could fetch around two hundred; but we shall see.  I'll put it up on MH$P and we'll go from there.  A deadline for mecate offers would be Sept 10th, at 9pm EST.
Thanks for looking!