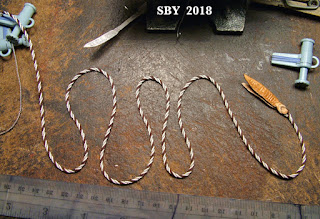 Though this photo doesn't show it, this mecate is at the end of its rope (o bad pun).  There is little more to do than tie the tassel knot and button on it.  It may not seem like much for 2 weeks' work, but it's been a hard row to hoe in several ways.
To begin with, I confess I had to re-learn how to make my own mecates.  I spent the first of the 2 weeks spinning up its three strands the wrong way!!  I use two ways to spin, or twist, thread together:  in combination or in opposition.  The difference depends on whether I want to combine smaller threads or set them in contrast.  Somehow, despite my own notes and pages of drawings, I settled on combination.  (stick out tongue and make a face)  I'm not sure why.  The last hackamore I did used combinations, but that was a year ago!  So after I'd done all three strands -- many hours -- I slowly decided I'd done them wrong.  The little nagging voice finally got to me...  I'd perfected the combinations, but...
Can you see how the checkered strand (the black & white) is irregular? 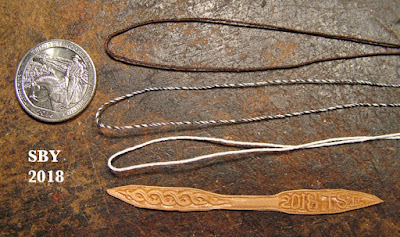 Combining the one-colored strands worked (!), but doing the black & white check (or fleck) that way was a sign I was on the wrong trail. 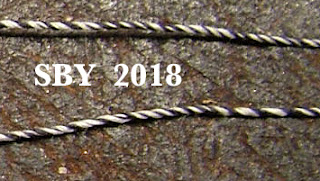 It should have looked much sharper and crisper.  It should have looked like this (below).  I eventually made the difficult decision to undo the entire strand and re-use the threads.  (Remarkably, the material stood up to this extreme treatment.)  Here is the proper check strand with its earlier buddies.  Can you see how the slant of the check strand is in the opposite direction from the brown's and the white's slant?

It's a cardinal rule:  Mecate parts must lie in the same direction.

After I fixed the checkered strand, I also un-spun and re-spun the brown and the white.  And that took more days.  It's a good thing these discoveries and decisions come in waves.  I'd never stand the shock of being proven so wrong all at once.  The customer is patient, for which I am so very grateful.

And that's the next confession.  This mecate is not for the Roby Canyon Hackamore at all.   While at NAN I let an old performance shower talk me into a short order.  The current state of affairs at the TSII is designed to let the artist choose what they want to do...  I needed the personal impetus of a direct order...  I was going to be making mecates anyway, for the Roby...  and, oh yeah, I happened to need the cash.
The deeper reason seems to be that when I'm stuck on a piece (I was stuck on the Roby, over whether to make a larger bosal), I go for something else I think I can finish fast.  Except this time the something else got stuck too.
Rats.

I can think of two connected silver linings to all this cloud of trouble.  The first is that this mecate refreshes me for the Roby's.  Yet another time through my recipe gives me yet another chance to perfect and standardize them.  Since I learned how to spin thread (over Christmas 2000, thank you Judith again) and used it for mecates, this will be my 23rd mecate.  At least with saddles and braided bridles, 24 seems to be my magic number.  Twenty-four iterations before every last possible bug and kink is out...
The second silver lining is further refinement to my notes and drawings.  Below is a sneak peak of something destined for my next book, a rough draft of a plate for mecates.

Here's a closer look at the current mecate under construction. 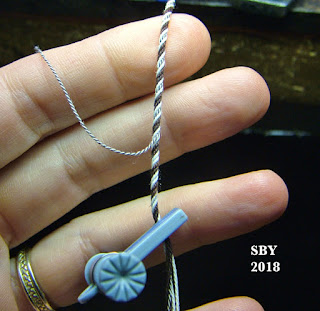 I had forgotten, also, how very hard these mecates were to make, once the strands were done and I was on to the second wave of spinning.  A half-inch at a time is reasonable.

Earlier posts on mecates include December 8, 2012 , Three Mecate Artists, and Fancy's Hackamore 2 mecate (2 parts, of which this link is the first).
Enjoy!