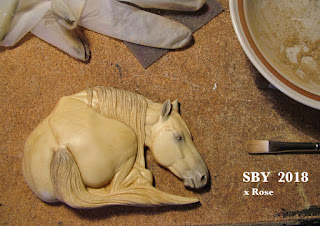 With this post I temporarily abandon the long form and take up the short notices appropriate to Works-In-Progress.  I have too much to say to fit onto FB but too little for my usual chapters, so what's an incorrigibly show-off artist to do??  Squeezing all this down to something I believe appropriate for my FB just isn't happening.

On the other hand, I have a trip to Tucson coming up that will last a week (if all goes as planned).  During that week no progress can be made on Brasenose.  (Truly he is too tender to survive a flight stuffed into my backpack, even packaged.  I know how tough I am on a horse.  This is the root of my OF collecting...)  And so right when the universe of National Model Painting Month explodes into action, I am forced to sit on the sidelines for a week.  However, there is Jypsi the Test Medallion;  I'm going to try and transport her across state lines...

I'm sorry I haven't taken earlier pictures of this lovely medallion.  This is 'Jypsi in Repose' by the incomparable Sarah Rose.  The medallion came into my hands when Sarah, for whatever reason, was late filling an order for me (I don't even remember which one) and threw in a sweetener.  As if she needed to do that.  (As if I minded waiting for a Rose horse... me, the TSII!!)   Anyhow, I had this beautiful bas-relief lying around when the decision was made to enter NaMoPaiMo.   It dawned on me I really, really needed a practice piece.
What you see is Layer 3 of what I'm hoping will eventually be a liver chestnut.  Right now it sure looks like a perfect claybank dun, except for the legs.  In my defense, I'm not exactly clear on which parts are legs.  In my defense, I've never pasteled in my life.  But that's what this is about eh?  The only surprise so far has been how long it takes... how transparent each layer has been.  I'm on step 3 of 10 of my tutorial and already I've deviated from the instructions.

(Not clear why there's a white spot on her nearside butt.  Hoping it's just lighting; it's not intentional.)

The other story is, of course, Brasenose.  He too is surprising me with how long it's taking.  Again thanks to NaMoPaiMo, I was warned there would be a lot of work in prepping.  It seems like forever although it's only been about 3 days.  The place where the tail touches the leg has been worst.  As I write this he's in the barn drying after his second coat of primer.
From the start my approach to NMPM was that I could only do it my way.  As a tackmaker the tools I felt most comfy with for prepping were jeweler's files.  That is what I've been using:  220-grit sandpaper, my two smallest files (left), the needle awl (braided handle), the Precista for cleaning the files, a paintbrush for dusting, and my X-Acto knife.  The awl is for testing pinhole depth, and, later, for smearing glue.  The Precista is a stainless-steel-wire brush originally designed for cleaning archeology specimens (the things you can find at the Gem Show!).  It works perfectly to take primer and resin out of my little files.  The drawback to using files for this job is you have to clean them constantly.  What's not shown is an old toothbrush to do the first steps of that same cleaning job.  The Precista is only for the final step of file-cleaning. 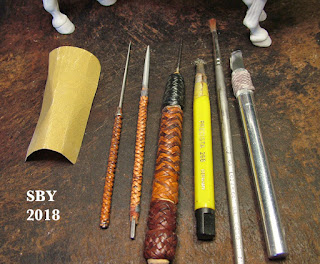 Scrape, sand, file, brush off horse, repeat until file is completely white and clogged.  Put down everything, use the toothbrush on the file(s) and then the Precista.  Repeat...  Three times now I've cleaned off everything and then dusted off the workboard itself (with a large feather)...  I started out using Elmer's for his pinholes, something that worked beautifully for tack but somehow wasn't quite right for Brasenose.  It did work on one of his fetlock holes but on the bigger ones the glue didn't fill them.  Last night I gave up and switched to gesso.  This has done better, though it seems very soft.

I know my dusting paintbrush is wildly too small.  Just now I found a bigger one.  A miniature tackshop does not need large brushes, but this one was hanging around for large-scale dyeing.

Good luck everyone in NaMoPaiMo!
Posted by timaru star ii at 11:41:00 AM